Heirloom tomatoes could save mankind 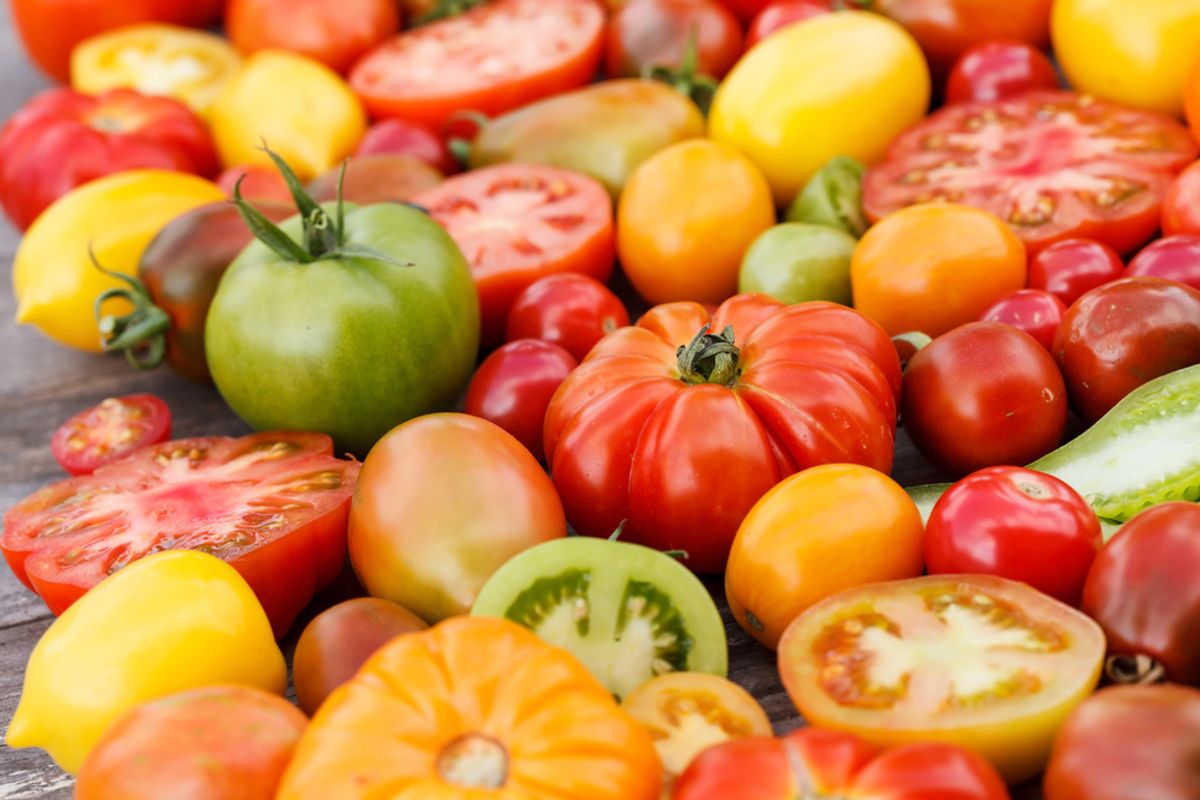 This article originally appeared on OnEarth.org.<

When I came home from the farmer’s market last week juggling two giant bags of tomatoes, my kids looked at me like I was insane. And maybe I had gone a little overboard. I confess to falling into a sort of heirloom mania around this time of year, unable to resist picking up at least one of these gloriously nonconformist fruits in every color, shape, and size. For an American raised on cookie-cutter produce, heirloom varieties are a happy reminder of the diversity that exists out there in our fields.

Except that, increasingly, it doesn’t. Thousands of our global plant varieties have disappeared in recent decades, due to habitat loss, extreme weather, and just plain disuse in an era of industrial agriculture. Thousands more are under threat. In a Nature article published last month, Cornell University plant geneticist Susan McCouch pointed out that there are approximately 300,000 species of flowering plants in the world; humans now depend on fewer than a dozen for a full 80 percent of our caloric intake. And, McCouch adds, we capitalize on just a fraction of the genetic diversity that resides within those plants.

Overreliance on so few food sources doesn’t just deprive us of dietary pleasure—the Roma and Beefsteak can only do so much, after all, as The New York Times pointed out today. It could also threaten our ability to feed ourselves over the long term. The lost diversity means that we have fewer resources to tap when it comes to facing down new pests and diseases, not to mention the many hazards implicit in climate change. The key to confronting these enormous challenges? The humble seed.

For thousands of years, farmers around the world have saved seeds from one season to another, taking them along when they moved to new regions and selecting those that fared best in various environments. But in the 20th century, as people began planting modern hybrid seeds—mostly to ensure higher yields and uniformity—many traditional varieties fell by the wayside and were ultimately lost altogether. Whereas farmers in this country grew some 7,100 named varieties of apples in the 19th century, for example, today only 300 of those varieties remain.

The mass extinctions come at a cost. Different species possess different qualities—resistance to a certain disease or pest, say, or to drought or frost. By identifying these useful traits and then crossbreeding the species that possess them with other plants, the world’s agronomists have surmounted various ecological challenges over the centuries. McCouch offers the example of Oryza nivara, a wild species of rice. In the late 1970s, researchers discovered that it resisted the grassy stunt virus, a disease that at the time was devastating rice crops. They crossed the species, which they identified only after surveying some 6,000 different varieties, with other crops that had been bred for high yields. Since then, the effort has provided protection against the virus in tropical Asian rices, feeding billions and saving countless lives. Of course, it came at great cost and took many years to accomplish—it generally takes 15 to 20 years to bring out a new crop variety—luxuries that, increasingly, we do not have.

The United Nations has said that in order to keep pace with population and income growth in the coming decades, food production worldwide will need to double by 2050. Crop yields already are stagnating in the face of rising temperatures, land and water shortages, and degraded soils, and in an era of increasing climate instability, we can ill afford to give up any of the resources that comprise our common toolkit. (“Who but a fool would discard the seemingly useless parts?” asked the American ecologist Aldo Leopold in his 1948 book A Sand County Almanac. “To keep every cog and wheel is the first precaution of intelligent tinkering.”) Which is why McCouch and the 50 or so colleagues with whom she wrote her Nature piece are calling for a renewed institutional commitment to biodiversity.

For an American raised on cookie-cutter produce, heirloom varieties are a happy reminder of the diversity that exists out there in our fields.
The United Nations Food and Agriculture Organization currently oversees 11 gene banks scattered around the world (containing mostly seeds but also tissue from seedless plants). But funding for those centers—the biggest of the 1,700 or so gene banks worldwide—poses a constant challenge (the cost of maintaining the U.N. collections runs to $18 million annually), and other threats are ever present. Iraq’s national seed bank was destroyed during the 2003 invasion of that country, for instance, and Afghanistan lost its bank in the Taliban’s overthrow in 2001. A typhoon flooded a Philippine seed bank, and an earthquake destroyed one in Nicaragua. In 2008, an international consortium led by the Global Crop Diversity Trust opened the Svalbard Global Seed Vault, in Norway, where an eventual 700,000 samples of crop varieties from around the world will serve as a sort of insurance policy for our future. Yet McCouch and her colleagues say that we need to do much more than simply store the seeds.

In their article, they call on the world’s plant scientists to obtain a sample of genetic information from each plant sample available under the International Treaty on Plant Genetic Resources for Food and Agriculture, a 2004 compact meant to ensure the equitable sharing of global biodiversity. (The plummeting cost of DNA sequencing over the past several years has meant that it’s now feasible to obtain so many such “fingerprints.”) Next, scientists and breeders should pair the information from these genetic “parts lists”—breakdowns of genes or gene sequences that perform particular functions—with the plants’ phenotypic profiles (information about their environmental and developmental characteristics). Finally, they recommend the establishment of a gigantic, open-source database that catalogues the diversity of all the gene collections in a single place. This would enable scientists from around the world to obtain appropriate seeds and plants and distribute them to farmers and commercial plant breeders for further crossing and testing in far-flung environments. McCouch puts the cost of her proposed global effort at $200 million a year (and points out that the U.S. routinely spends up to $180 million on a single fighter jet).

She isn’t the only one sounding the alarm over our seeds. In an op-ed that appeared a few weeks ago in the New York Times, Gary Paul Nabhan, a research scientist at the University of Arizona, called for a similar initiative on a national scale. He referred to a “new reality” in which long stretches of hundred-degree-plus days threaten the American food supply, and suggested that in order to combat the problem we must address our “looming seed crisis.” The U.S. government should direct more money to the country’s “underfinanced seed collection and distribution programs,” Nabhan wrote, and the National Plant Germplasm System, the Department of Agriculture’s reserve of crop seeds, should be given the financing to evaluate the hundreds of thousands of seed collections for drought and heat tolerance, as well as other climatic adaptations. He argued, like McCouch, that investing in seeds is vital to our very survival.

Well-funded global and national seed-loving pushes obviously will yield the highest returns, but regional efforts also play a role. We can do our part by getting involved with such organizations as the Seed Savers Exchange, New York City Native Plant Conservation Initiative, Great Lakes Bioneers Chicago, Hawai’i Public Seed Initiative, and Native Seeds/SEARCH. And for more instant gratification, we can raise our own heirloom fruits and vegetables (here are instructions for saving the seeds) and seek out growers who do.

I used some of the beauties I picked up to make this lovely pasta with green heirloom tomatoes, taken from an article about a fruit breeder in the current issue of Martha Stewart Living. The dish has the virtue of being meatless (it’s got anchovies, which, like heirloom vegetables, are a good thing to eat if you care about feeding the world), and it looks gorgeous on the plate. The flavor is bright with mint and parsley, the almonds provide winning crunch, and the green tomatoes lend a grassiness you’ll never get from a Roma.

1. Bring a large pot of salted water to a boil. Add pasta and cook until al dente; drain. Transfer pasta to a large, wide bowl and toss gently with 2 tablespoons oil. Let cool, tossing occasionally to prevent sticking, about 8 minutes.

3. Divide pasta and sauce among 4 plates or a platter. Sprinkle with remaining almonds and garnish with mint. Season with pepper and drizzle with oil.