Atheists challenge the Pledge of Allegiance 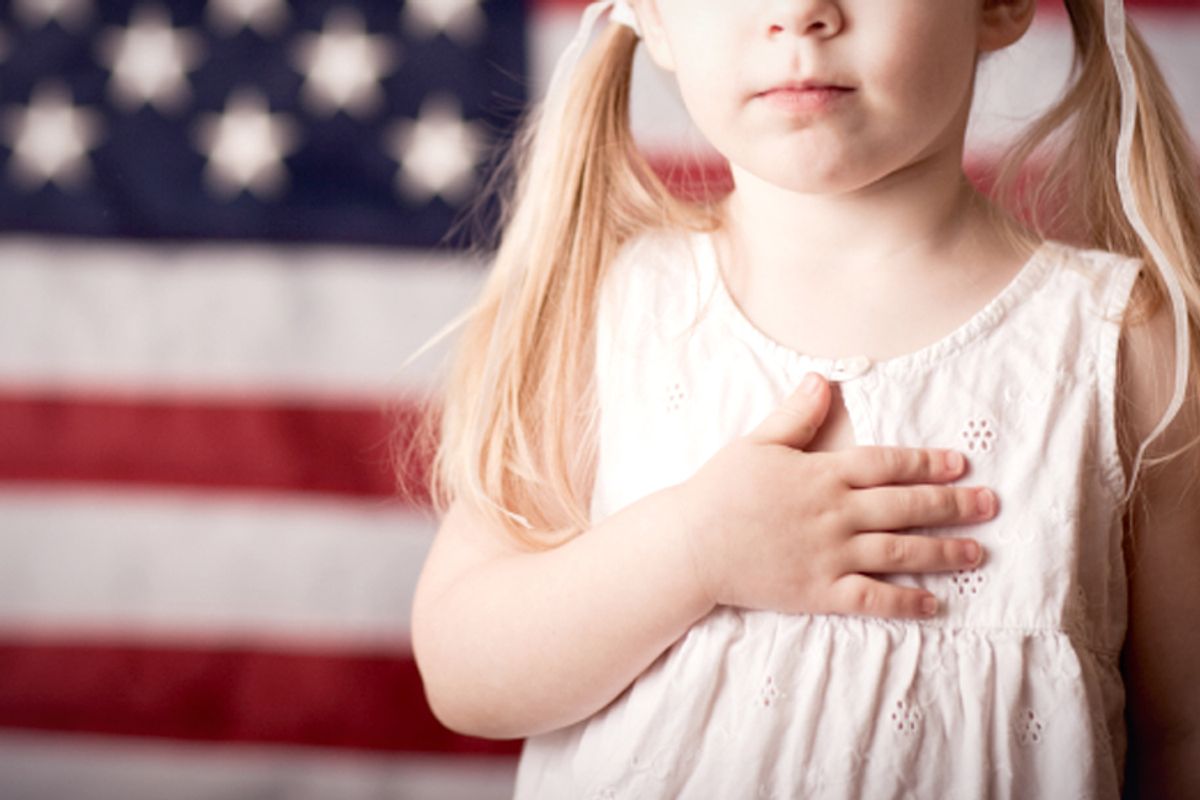 Just in time for back to school: In Massachusetts this week, a venerable classroom tradition is facing a high court challenge. The state's Supreme Judicial Court is currently weighing an atheist couple's argument that the words "under God" be struck from the Pledge of Allegiance, because they claim the phrase is exclusionary to atheist children like theirs. In other news – wait, why are school children still saying the Pledge of Allegiance anyway?

The anonymous couple's attorney David Niose contends that "This case presents an unpopular and wrongly vilified minority facing discrimination" by a state "promoting and propagating the idea that good patriots are God believers." Though it's mandatory for teachers to lead students in the Pledge each day, it's voluntary for students to say it. Last year, Middlesex Superior Court Judge Jane Haggerty ruled that the "under God" clause "does not convert the exercise into a prayer" and does not violate children's rights. OK, but who wants to be the one 7-year-old to sit out something the authority figure just invited the whole class to do?

The idea that God is an intrinsic and necessary part of the Pledge is silly. The original Pledge of Allegiance didn't even include the phrase "under God." It was added in the 1950s. But why is the Pledge itself still mandatory in so many places? Leading the Pledge is also mandatory in New York, but the rule is loosely enforced. Neither of my children's pinko, godless public schools do it -- my 9-year-old asked me this morning what the Pledge even is. (Their Girl Scout troop also unceremoniously struck the phrase "to serve God" from its Promise and the earth did not explode.) And my elder daughter, who recalls it vaguely from her old kindergarten, explained, "You say you'll be loyal to the flag. Not your country. The flag. I don't get it." Maybe it's blasé attitudes like theirs that pushed a Brooklyn parent two years ago to demand her local public school start enforcing it.

Growing up in Catholic schools, my weekday classroom routine consisted of facing the front of the room, hand over heart, and reciting the Pledge. I then turned around to the crucifix on the back wall and recited the Our Father. I was a patriotic Christian kid then and I'm a patriotic Christian adult now and I have never stopped finding the practice strange and pointless and time-wasting.

Rote recitation, day in and day out, is ultimately meaningless. Ask any second-grader if she knows the meaning of "indivisible." Ask a random adult, while you're at it. The question shouldn't be whether the phrase "under God" belongs in the Pledge; it should be whether the Pledge itself belongs. Does it really speak to or reassure the numerous non-believer kids out there, or the immigrant or dual citizenship kids? Does it teach any of them anything about loyalty or duty?

I am trying every day to raise my children to practice their faith and to respect their country. But love and loyalty don't spring from standing up and dully parroting a creed because the state says the teacher has to get up and do it. We have a massively broken public education system in our country. And the Pledge is a remnant of so much that's wrong – drilling, repetition and standardization, when what is desperately called for is inquiry, skepticism and diversity.