Sonos sent me an amazing wireless stereo system to review. Wild horses won't drag it away 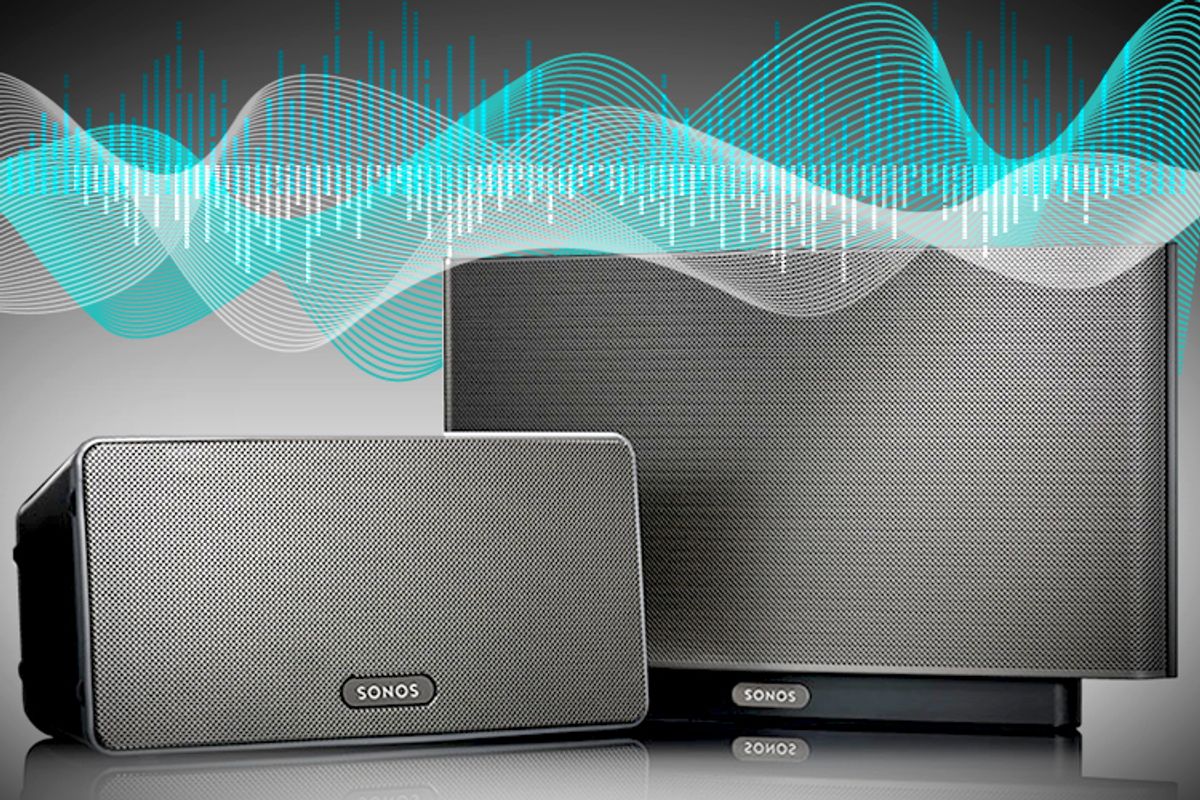 My house is an orchestrated cacophony. In the kitchen, Joy Division's "The Sound of Music" is blasting out of one Sonos wireless speaker. In the living room, Parov Stelar is doing his "electro-swing" thing from another. And in the family room, the TV, hooked up to both my computer and a Sonos "Playbar," is pounding out AWOLNATION's "Sail." I've got my iTunes library, my son's Spotify account and YouTube all playing at once -- on the same Sonos wireless stereo system.

But yeah, it's a little noisy, because in my rental the kitchen, living room and family room are all part of one big space. I'm doing this crazy multiplexing just because I can, not because it makes any kind of audio-listening sense. So, from the comfort of my iPhone app, I decide to "group" all my speakers together in "party mode" linked to the TV. Cacophony, be gone. PUMP UP THE BASS.

And I think, this is how it should be! This is what I've craved ever since I played that first MP3 on my crappy computer speakers back in the late '90s. High fidelity sound where I want it, when I want it, from any source I can think of. Finally. The promise of digital music, realized.

I wish my grandfather was around to hear it.

The sheer size of the package the FedEx guy dropped off at my doorstep one week ago was impressive enough. Then he said, "I've got two more."

I was flabbergasted, in that delightedly surprised way you feel when someone gives you a birthday present that you didn't even know you wanted but as soon as you see it you can't wait to play with. The progress of digital technology has conditioned me to expect that new music gear will be small. We listen to music on our phones, for goodness' sake. We go into raptures about Jamboxes that are the size of pencil boxes. Those big lumbering old speaker cabinets that may still be occupying corners in your mom's house are increasingly rare dinosaurs.

So, when I agreed to take a look at a review copy of the Sonos wireless stereo system, I was expecting something a little more restrained.

What I got was heavy metal.

Sonos sent me five discrete "components." A petite $49 "Bridge" that connects directly to your router via Ethernet. Two $299 wireless "Play:3" speakers, each about the size of a lunchbox. A $699 wireless "Sub" subwoofer that looks like modern art and feels like it is made out of lead. And, finally, the newest addition to the Sonos family tree, the $699 "Playbar," a stylish soundbar about 3 feet long and 6 inches deep that connects directly to your (newish) TV via an optical cord. Instant home theater.

As you can see, a full-fledged Sonos system does not come cheap. The complete Sonos system is not the alternative for the hipster who doesn't have more to call his own than a futon, a yoga mat and a smartphone. (Get a Jambox.) But if you've got the cash, and you care about your music, Sonos will make you happy. Of course, you aren't required to have all the components Sonos sent me. Personally, even though the Playbar made my TV sound fantastic, I could easily live without it (though I will surely miss it when I send it back). More to the point, if you compare the price of a Sonos system to the price, in 1984, of a top of the line receiver/amp, speakers, cassette deck and turntable ... well, being a hi-fi snob cost quite a bit back in the day, too.

But to fully appreciate my delirious baffled joy when I started unpacking the Sonos system, you have to know that for the last year, I have been living without anything I could call a real stereo. Since my house fire last summer, my old hi-fi has been in storage. I have a Windows computer with a few hundred gigs of songs in an iTunes library -- but no speakers! I've been reduced to listening to music from my phone plugged into a Sony docking station. Which is better than nothing, but not great. And certainly not what anyone would consider "high fidelity."

To go from such stereophonic paucity directly to a full-featured Sonos system was like being instantly transported from the Sahara desert to the Amazonian rain forest. The sudden drench of stimulation knocked my space time continuum awry. All the stereo equipment I'd ever cherished passed before my eyes. I could feel my grandfather -- a pioneering early adopter who had a cool old tube amp at the heart of his system when I first became tall enough to put a record on a turntable -- nodding in satisfaction. I heard my mother blasting Verdi on Saturday afternoons in Gainesville, Fla., from speakers that I dragged off to college with me, where they took up about a third of the habitable space in my dorm room. Most of all, I recalled the hodgepodge computer/stereo mashup that I had constructed over the last 15 years in my pre-fire house, an ungainly mess with cords snaking all over the place.

There's probably a German word for the fact that fans of technology and music are undoubtedly doomed to always yearn for something better. But as I contemplated the essential nature of the Sonos system, I realized that here was what, in theory, I had been looking for: a modular network that could adapt to what I already had, currently wanted, and might need in the future that I didn't yet have a clue I would crave.

Initial setup of my Sonos system was surprisingly simple. Each component needs its own power source, so the configuration is not completely "wireless," technically speaking, but getting the different components to talk to each other was a breeze. I downloaded the Sonos Controller app onto my Mac Air and followed the prompts. In minutes I was able to turn my TV into a full home theater. I regret the fact that when I turned on the TV, it was on a channel featuring the '70s band Styx playing "The Grand Illusion," but hear me when I say this: Sonos made Styx sound good. Sonos made Styx sound good!

You're not going to find out from me how the sound quality of Sonos wireless speakers ranks up against top-of-the-line Bose offerings or other elite audio hardware. All I can tell you is that what I heard was as good as I needed it to be. A few hours on Google convinced me that Sonos is well-regarded by people who make a living reviewing audio equipment. Sure, there's always something better, but my windows have been rattling for a couple of days now, and I just want more of the same.

I did run into some glitches. I had trouble getting the Sonos Controller software on my Mac to see the iTunes library on my Windows 7 machine. Eventually, I said the hell with it and reinstalled the controller on the Windows machine. (My iPhone Sonos app, although delectable in many ways, also can't find the Windows iTunes library). My son's Spotify account worked like a charm the first time we tried it, but then started giving us error messages a day later. (I'm pretty sure this is a minor issue, but I had to write this story instead of troubleshoot my stereo gear.)

In general, it all went swimmingly. Sonos is as much a software company as it is a stereo equipment hardware developer, and it shows. The integration of multiple music services into the system is impressive. Pandora, Rdio, thousands of free radio stations, Audible, last.fm, MOG, Rhapsody -- the world of streaming music plugs into Sonos like Lego blocks snapping together.

As you play with your mouse -- directing one playlist into the kitchen, the local radio station into the living room -- you start to see that the digital music lifestyle isn't simply more convenient than the old analog world -- it is in some profound ways deeply superior. Sonos at its most essential level is really just an interface between you and all the music that is out there in the world -- and all the stereo and computer equipment, old and new, that you might have in your home. Flexibility, thy name is Sonos.

Because my old system won't be obsolete. With the addition of another Sonos component, the CONNECT:Amp, I can plug my old speakers directly into the Sonos system. I can even take the output of my old receiver, connected to my turntable, cassette player and CD player, and pipe those sounds into the system. Once I get back in my house, I will be streaming my old ELO records off the turntable downstairs to the wireless speaker upstairs in my bedroom. When the record ends downstairs, instead of trudging down to the first floor to flip the vinyl, I'll just use my iPhone to switch the upstairs speakers to a different feed.

The modular upgradability of a Sonos system -- as Farhad Manjoo brilliantly noted a few years ago, Sonos components actually get better over time, as their software is upgraded and more services are added -- would have pleased my grandfather. He embodied a mild contradiction when it came to technology. He was both an early adopter and someone who didn't like to get rid of his old technology. I always marveled at his stereo system, because it was something of a museum of outmoded technology, patched together over the years in incomprehensible configurations. I didn't understand why someone who was obviously in love with new technology didn't just scrap his old junk, but if it was still working, he wouldn't get rid of it, no matter how Rube Goldberg-ian his contraptions became.

He would have grasped at once the brilliance of the Sonos system. Like the Internet itself, Sonos is a bridge between all kinds of disparate hardware and software sources. It embodies a truth that all audiophiles glimpsed when they first realized, a couple of decades ago, that music -- indeed, all forms of entertainment -- had become software. You can have it all.