Bill de Blasio's surge is not a national liberal revival

As a lefty surges to probable victory in a key race this week, overeager pundits are taking all the wrong lessons 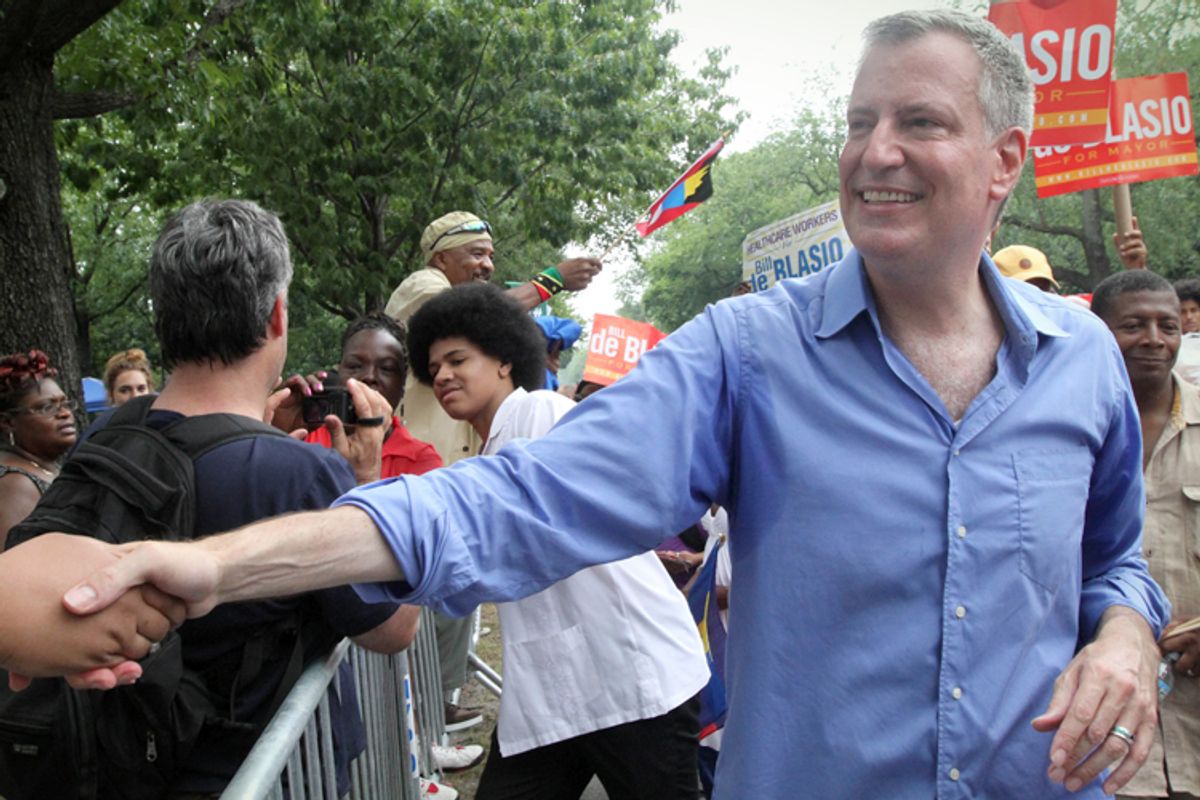 Bill de Blasio, the leading candidate for mayor in New York’s upcoming Democratic primary, has gotten liberal voters excited. He’s concerned about inequality. He doesn’t like how the NYPD’s stop and frisk policy has been applied. He’s invested in fixing the public school system. His favorite Wu Tang member is GZA.

The result of all this is that – if the polls are to be believed – he's about to win Tuesday’s primary by as much as 20 points. A natural conclusion: This is evidence of a "rebirth of liberalism," and a "reproducible" roadmap for liberals across America for how to run a fiercely progressive campaign and win ("Bill de Blasio's America" and "Bill de Blasio and the Rebirth of Economic Liberalism" were among the exuberant national headlines in recent days).

That natural conclusion -- glorious and exciting as it may sound -- is also, sadly, missing a whole lot of context.

The truth is that de Blasio is masterfully running almost precisely the same campaign, with the same message, that nearly every winner of a high-profile New York City-wide Democratic primary runs. Rather than augur some massive change in the landscape nationally – or even in New York, specifically – de Blasio’s potential victory is more a continuation of what has always been true: The most liberal of the credible candidates tends to win Democratic primaries in New York.

This isn't to disparage de Blasio. It's to say that the success of his campaign message does not necessarily portend a new, national liberal revival.

Perhaps the most salient way to illustrate the point is by noting that de Blasio’s campaign slogan about New York being “a tale of two cities“ – inspiring and Dickensian as it is -- is nearly word for word what Fernando Ferrer said in his campaigns in 2001 and 2005. Ferrer, using this same theme, cruised to the nomination in 2005, clearing the 40 percent mark needed to avoid a runoff. (His closest rival: an up-and-coming congressman and gym rat named Anthony Weiner.)

Four years earlier, Ferrer would take his “tale of two cities” campaign to the top of the pack in the Democratic primary, before losing in a run-off to… the also-liberal Mark Green.

Recent history may be even more illustrative.

The most recent high-profile competitive Democratic primary in New York was Eric Schneiderman’s victorious campaign to be Attorney General (on which I was a lead strategist). While the contest was statewide, the majority of the Democratic primary electorate resided in the city -- and Schneiderman, then a Manhattan state senator, based his campaign almost entirely on his ability to pull out the vote in the city. Like de Blasio, he trailed for much of the summer when few voters were paying attention, and ran as an unashamed liberal (“Democrat Tries to Stands Out as Liberal in Primary,” the New York Times reported), emphasizing economic justice and racial equality. Facing a prosecutor and three others in a crowded campaign for a law enforcement position, he would surge toward the end of August, and win.

In 2009, New York City had municipal elections for the same seats as this year’s contests. There was no competitive primary for mayor, but the positions of public advocate and comptroller were hotly contested. In the former race, the same Bill de Blasio ran a similarly progressive campaign, winning a run-off against Green. In the other key primary, liberal John Liu easily defeated his more moderate rivals despite spending the final week of the primary defending the veracity of basic details of his autobiography.

This time around, de Blasio‘s running in a race that features two more moderate opponents in Bill Thompson and Christine Quinn; a liberal rival but one whose campaign has been under a legal cloud, in Liu; a few other lesser-known contenders; and an Anthony Weiner. Seen in the context of New York political history, the success of his liberal message is neither a huge surprise, nor is it necessarily a watershed moment for progressivism in America.

To de Blasio’s great credit, his campaign has inspired people in the city in a way that some of these earlier campaigns have not. According to polls, he’s leading among men and women, and every racial group in the city. His mixed race family, including his son Dante, has captivated New Yorkers, and disoriented headline writers. And his outspokenness on issues like stop-and-frisk has given an explicit urgency to the quest for racial justice.

But the fact remains that for longtime observers of New York City politics, the success of de Blasio’s message in connecting with the city’s Democratic primary electorate is not particularly unexpected. That message will receive a truer test in the general election, when his Republican opponent is likely to call him terrible names, and do so with the support of the past two mayors, several editorial pages, and many wealthy contributors (including, potentially, Howard Wolfson).

In the meantime, exciting as the success of a strong liberal may be, the New York City Democratic primary electorate is not the most representative sample of the American people. Want to really launch a revival of economic liberalism that permeates the whole country? A good model to start with is right here.