The South killed the safety net

Europeans came to this country for a better life. It hasn't always meant helping the less fortunate 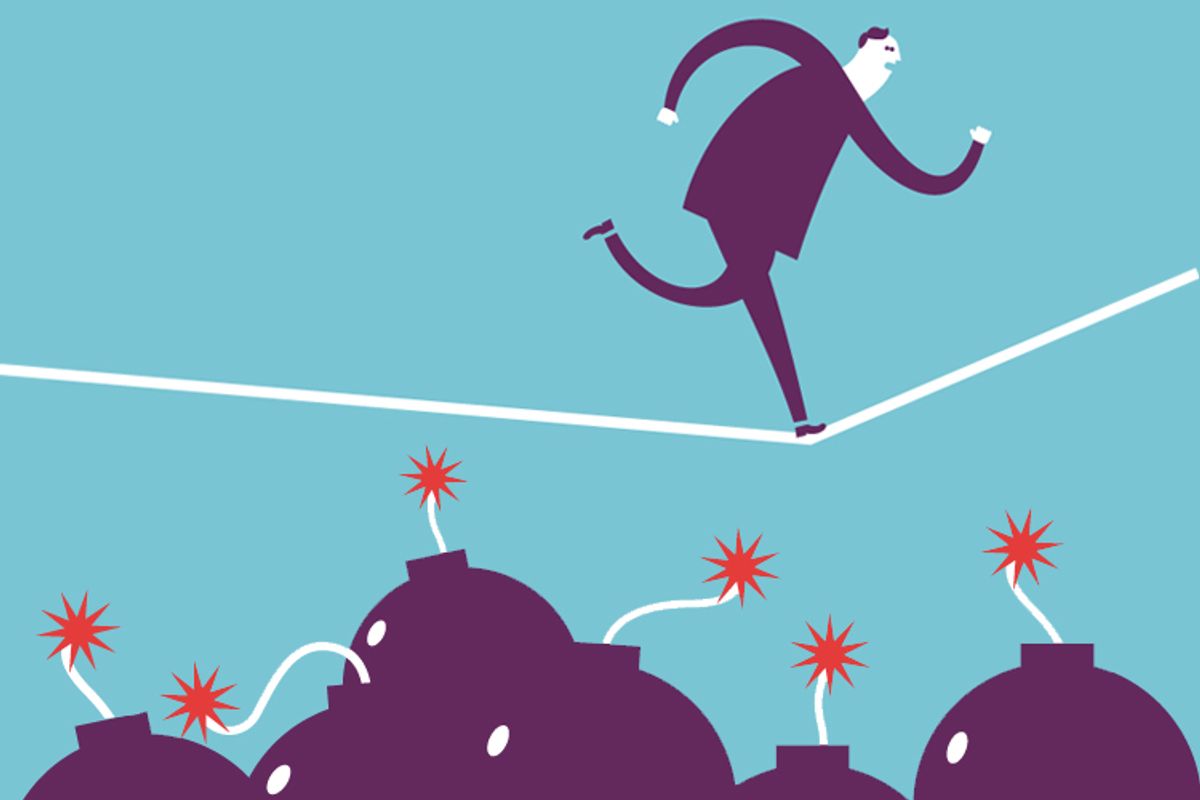 Excerpted from The American Way of Poverty: How the Other Half Still Lives

The South’s aversion both to taxes and to mandated government safety net structures had a long, and somewhat surprising, pedigree. In the late eighteenth century, popular radical writers such as Condorcet in France and Tom Paine in England had called for the creation of comprehensive social insurance systems based around universal pensions, child allowances, and education for all. Neither, however, managed to successfully alter prevailing political and moral doctrines. In France, after the frenzy of the revolutionary years the counterrevolution of the post-Napoleonic period put a halt to radical social experiments for decades. And in the United Kingdom, at least partially in response to the violence unleashed by revolutionaries in France, the early nineteenth century saw a tide of conservative reaction. Give money to the poor, the theory went, and you were encouraging indolence, dependency, and ultimately societal chaos. In 1834, after the publication of the Poor Law Report, “outdoor relief”—the giving of state moneys to the able-bodied poor in a non-workhouse context—was banned. For most of the rest of Queen Victoria’s near-seventy-year reign, “the great unwashed” were either left to find their own ways through terrain of hunger, homelessness, and disease, or were corralled into the sorts of ghastly workhouse settings made infamous by the writings of Charles Dickens.

In America, the South in particular took the Victorian lesson to heart, though to a lesser degree so too did the rest of the country. As did most of Europe. After all, Great Britain was the dominant power of the age, its economic prescriptions as hard to avoid as, say, the Washington consensus’s emphasis on opening up markets to international trade, privatizing public services, and deregulation a century and a half later. Coercive poor law politics, shaped around workhouses, poor houses, and other near-prison-like conditions for confining and attending to the subsistence needs of the poor was, as a consequence, the dominant response to poverty on both sides of the Atlantic throughout the middle decades of the nineteenth century.

A couple generations later, however, as the rise of industrial societies in Europe created huge economic dislocations and massive political unrest, Europe revisited the issue. Between 1883 and 1889, Otto von Bismarck’s Germany created a slew of social insurance programs. In England, at about the same time, social reformers such as Arnold Toynbee began calling for the creation of a government-funded safety net. And in 1908, Parliament passed the Old Age Pensions Act—part of a two-year spasm of social reform that culminated in the fabled People’s Budget of 1909. French reformers preached voluntary mutual assistance schemes and increasingly urged the government fund universal assistance programs out of a general tax base. After decades of agitation, the French Parliament enacted a state pension system in 1910.

In the United States, though, support for such reforms remained more tenuous. True, an array of progressive political groups supported workers’ compensation laws by the early twentieth century. And by 1917, with the Supreme Court having upheld the constitutionality of these laws, thirty-seven states had systems in place, most of them compulsory. In fact, as a region, only the Deep South had completely neglected to implement compensation schemes for at least some categories of injured workers. But in contrast to this, enthusiasm for social insurance systems didn’t take off prior to World War I. True, several states in America created their own very limited pension plans during these years, especially for widows and for teachers—who at the time were mainly women—and several also seeded their own unemployment insurance systems. Yet not until the New Deal did the idea of a federal system gain traction. Before then, even the American Federation of Labor and the left-wing Nation magazine opposed mandatory Social Security. Hence the paradoxical fact that when, in 1912, Teddy Roosevelt’s Progressives came out in support of social insurance, including a form of compulsory medical insurance, an alliance of conservatives, socialists, trade unionists, and federalists combined to defeat it. Opponents argued that the imposition of mandates on working Americans, forcing them to pay into a system to support the elderly and to provide medical coverage for the sick, was foreign to the country’s founding principles. What was happening in Europe was, they argued, too paternalistic, too coercive. Moreover, in a land of great social mobility and endless opportunity such systems were unnecessary. Keep them for the ossified Old World—keep them for places where one’s station in life was determined by one’s parentage.

Thus, while America’s peer nations across the Atlantic were experimenting with forms of universal old age pensions and healthcare coverage—to tackle the extremes of poverty that had driven so many Europeans to migrate to the United States in search of higher living standards—when it came to the creation of nationwide safety net protections America stalled. Hobbled by the South’s antipathy to any form of welfare, and by a broader national reluctance to corral citizens into insurance programs against their will, advocates for the sorts of reforms occurring in Europe ran up against a brick wall. It would take the Great Depression, and the collapse of both the working and the middle classes’ sense of stability and burgeoning economic possibility, to shift public opinion behind the establishment of Social Security and government aid in the arena of housing and employment. In fact, it wasn’t until 1935, six years after Wall Street’s catastrophic collapse, that Congress legislated into being Social Security, disability and unemployment insurance, and Aid to Families with Dependent Children. And it was not until 1937 that Congress would take the lead on funding large-scale public housing.

As for healthcare reform, long a holy grail of social reformers, attempts by Franklin Roosevelt before World War II and Harry Truman at the end of the war to create universal healthcare foundered on the rocks of opposition from the American Medical Association, as well as more general hostility from the same political wellspring that had opposed Social Security’s creation. Truman’s proposal for a 4 percent payroll tax to cover a national health insurance system, which he proposed in a special message to Congress on November 19, 1945, was denounced as being an attempt to “socialize medicine.” It was a critique that would crop up repeatedly over the decades, when Presidents Truman, Kennedy, Johnson, Nixon, Carter, Clinton, and finally Obama proposed significant overhauls to the country’s dysfunctional and inequitable healthcare systems. Ultimately, it would take the upheavals of the 1960s to partially get around this critique and pave the way for Medicaid and Medicare—though in the case of Medicaid, Congress gave the states considerable leeway as to whom they covered and what services they provided. And it would take the 2008 financial collapse to create just about enough momentum for President Obama to get Congress to pass a watered-down version of universal healthcare. Even then, the backlash was massive, the acrimonious debate creating a climate in which the conservative Tea Party movement could flourish.

So, too, it would take the calamity of 1930s-era deflation, and the threat of wholesale bankruptcy for America’s millions of farmers for the federal government, at the urging of Secretary of Agriculture Henry Wallace, to start providing food aid to the country’s hungry. It would take the work of Michael Harrington and others a generation later to prod Washington to set up a national food stamps system and then to expand vital nutritional programs such as school breakfasts and lunches and WIC, the Women, Infants, and Children program run by the U.S. Department of Agriculture.

At first, this food assistance to the poor was, essentially, a way of propping up agricultural prices by having local counties buy up surplus crops and thus preserve market buoyancy. “We must adjust downward our surplus supplies until domestic and foreign markets can be restored,” Wallace, who had grown up on a farm in rural Iowa, declared in his first radio address on March 10, 1933. The strategy worked for the farmers, and to a degree it alleviated hunger for a portion of the indigent population. It was, however, massively incomplete. Too few people received the aid; too many regions and categories of poor were left unhelped.

In 1961, a generation later, newly inaugurated president John F. Kennedy signed an executive order creating a pilot food stamp program, funded by the federal government, in eighteen states. After Kennedy’s death, President Johnson pushed Congress to pass a Food Stamp Act that allowed counties across the country to choose to opt into the food stamp system, with poor families paying a percentage of their income to access food stamps worth considerably more—the stamps, in other words, were not free but were heavily subsidized. In the late 1960s, the voluntary nature of the system was replaced. Over several years leading up to 1974, all counties would have to opt into the system. By the mid-1970s, food assistance paid for by the feds, to the tune of billions of dollars a year, had become the country’s single most effective intervention against poverty; by the end of the decade, food stamps alone had expanded to the point that the program was costing the government more than $20 billion (in 2012 dollar values) annually.

In fact, even while President Richard Nixon rhetorically tilted rightward—talking of a Silent Majority enraged by lax criminal justice codes, a mollycoddling welfare state, and the presence of a seemingly permanent underclass—in reality he presided over significant expansions of the welfare state, especially when it came to antihunger programs. He also sought to create a universal healthcare system that in many of its particulars looked strikingly like the one ultimately implemented under President Obama nearly four decades later.

Three years after Nixon left office, Congress eliminated the requirement that poor families had to buy into the food stamp program; thenceforth, the cost of the food stamps was fully borne by the federal government. “The most important accomplishment of this period was the elimination of purchase prices as a barrier to participation,” wrote the social scientist Dennis Roth in a history of the food stamp program commissioned by the Economic Research Service of the U.S. Department of Agriculture.

[The achievements of the War on Poverty, however, rapidly came under fire.] From the 1970s on, as misery and hardship stubbornly refused to vanish from the national landscape, America's commitment both to reducing income inequality and to mitigating the effects of that inequality began to wane. Both rhetorically and in terms of practical policies, America’s leadership class began a long march away from redistributive liberalism. Tax policy became more regressive. And the tax code came overwhelmingly to benefit the wealthiest Americans, with a falloff in the progressive nature of the tax bands and the near-complete emasculation of the estate tax system. Huge companies such as GE found ways to avoid paying any corporate taxes, and billionaires such as Warren Buffett, who made most of his money from capital gains, ended up paying a smaller percentage to the government in taxes than did their secretaries.

Cumulatively, programs and wage protections developed over the better part of a century came under tremendous pressure as the great unraveling of public infrastructure picked up pace.

Excerpted from "The American Way of Poverty: How the Other Half Still Lives" by Sasha Abramsky. Reprinted with permission from Nation Books.