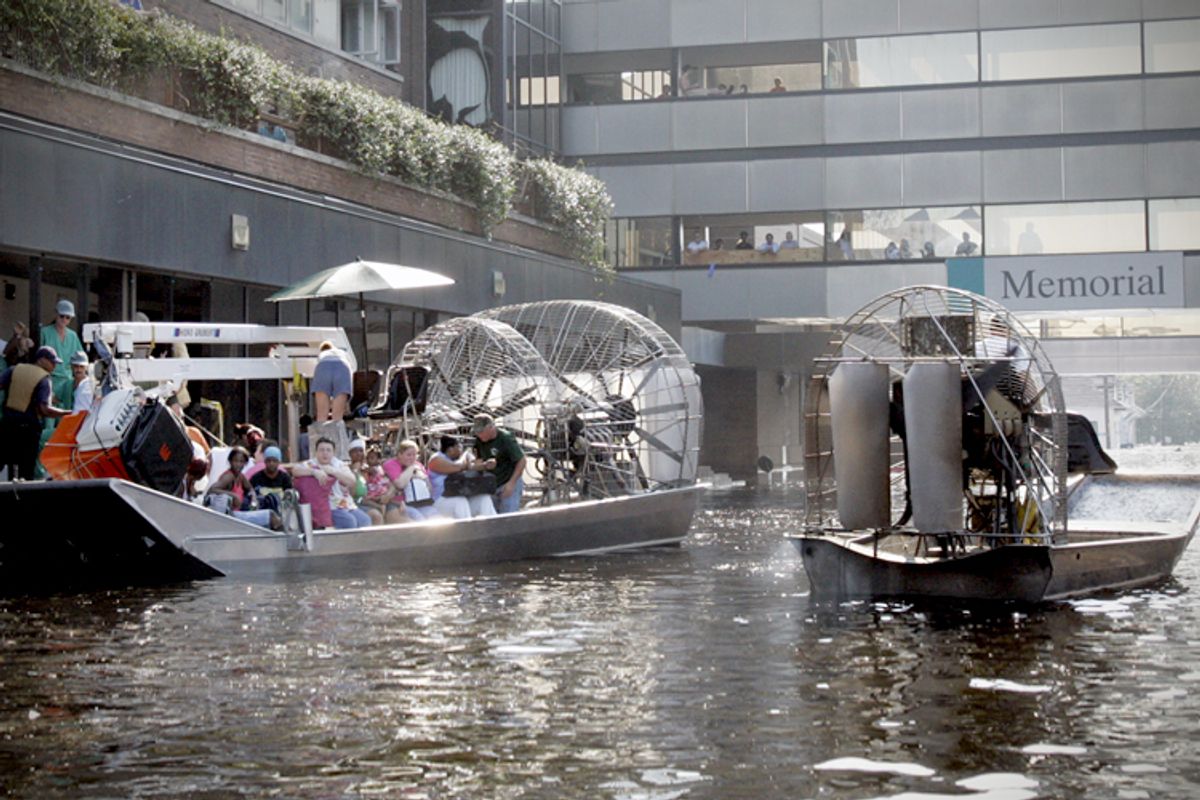 When a disaster mortuary team entered Memorial Medical Center in New Orleans on Sept. 11, 2005, they recovered 45 bodies, many of them in the hospital's chapel, where they had been left by staff members before the facility was evacuated on the night of Thursday, Sept. 2. Just how the dead, all former patients, came to be there is the subject of Sheri Fink's hefty and exhaustively reported, "Five Days at Memorial: Life and Death in a Storm-Ravaged Hospital."

This important book is the final product of a joint investigative project initially funded by the New York Times and ProPublica. Fink interviewed hundreds of people, ranging from doctors and nurses to law enforcement officers, patients, family members, government officials and volunteers. At the center of this inquiry is the arrest in 2006 of a doctor, Anna Pou, and two nurses from the hospital's intensive care unit, Cheri Landry and Lori Budo, on charges of second-degree murder. Pou and the nurses, prosecutors contended, had administered lethal doses of morphine and other painkillers to at least four patients of LifeCare, a "hospital within a hospital" that leased a floor from Memorial and used the services of some of Memorial's doctors. The nurses were compelled to testify after the DA decided not to prosecute them. In 2007, a grand jury refused to indict Pou on any of the charges brought against her.

What exactly happened at Memorial Medical Center on Sept. 2, 2005 may never be known to the public; Pou, still vulnerable to civil suits, refuses to discuss her actions in any detail. The five days after Hurricane Katrina hit the city, and especially the 40-hour period after the facility's back-up generators failed, were hellish. The loss of power halted elevators, plunged interior corridors into fetid darkness, cut off communication with the outside world and, most alarming of all, stilled the many machines used to sustain seriously ill patients, like those on the LifeCare floor. Toilets backed up until the reek of sewage filled the halls. Temperatures soared, wreaking havoc, especially on fragile and elderly patients.

With ventilators out of commission, nurses had to "bag" patients who couldn't breathe on their own, regularly squeezing a device called an Ambu Bag to force air into their lungs. Others carried the sick in improvised hammocks made of bed sheets down several floors of pitch-black stairwell, though a shaft in the wall of the machine room to the parking garage and then up again on two more flights of rickety, exposed metal stairs to wait for hours on a neglected helipad where helicopters appeared only intermittently. Hospital staff could see a Walgreens being ransacked from their windows and heard wild rumors about martial law, roving gangs, snipers, rapists and looters. Some, keenly aware of the temptation posed by the hospital pharmacy, armed themselves and stood guard.

The first part of Fink's book describes these five days from the perspective of over a dozen participants, although the book's central figure, Pou, has never spoken on the record about some of the key events. It's a confusing narrative that reads at times like a notebook dump. Fink strives so mightily to present an impartial version of these interlocking accounts that the story often seems to lack shape or coherence, the meaning of this or that detail unclear and the timeline occasionally muddled.

On the other hand, this may in the end serve as the most accurate depiction of how the experience felt to the people involved, with cryptic snatches of overheard conversations, nameless but authoritative-acting men popping up to order everyone around before disappearing again, gunshots sounding in the streets, apocalyptic announcements on the radio, the agonizing experience of witnessing longtime patients suffer, the punishing heat and sleep-deprivation and worry about family members left at home. The second half of the book, which describes the investigation of the deaths and the legal aftermath, demonstrates that Fink, an M.D. and Pulitzer-winning journalist, certainly knows how to craft a nonfiction page-turner.

The way Fink tells it, it seems that some doctors and nurses at Memorial administered heavy doses of morphine or the sedative midazolam, or both, to gravely ill patients, possibly to ease their fear and pain, but probably also to hasten their deaths. As more than one nurse remarks, this is not unheard-of in medicine-as-usual, although it is rarely acknowledged. It also seems likely that the doctors felt the patients wouldn't survive the evacuation and that in one case the remaining staff would be physically incapable of carrying a 300-pound-plus man out of the building. Others suspected, correctly, that evacuated patients would be taken to a place where they'd have access to no care at all. (Initially some medical evacuees were taken to hospitals, but in order to keep the helicopters in steady rotation over the flooded areas, many were dropped at SARBOOs -- search-and-rescue bases of operations -- where the ambulances that were supposed to pick them up failed to materialize. One Memorial doctor watched other physician's patients moaning and dying around him in an open airport concourse after weeping, overwhelmed relief workers ran out of supplies in less than a day.)

The charges filed against Pou and the two nurses were highly unpopular with the public. Many in New Orleans regarded hospital staffers who stayed for the storm as heroes and thought Louisiana attorney general, Charles Foti, Jr., had pursued the case in order to garner favor with senior-citizen voters for an upcoming election. The medical and nursing professions closed ranks around their own.

But that doesn't mean that all these supporters were convinced no euthanasia had occurred. Pou was known to be an extraordinarily compassionate, selfless and committed surgeon; the accused nurses were similarly dedicated. Even people who didn't know them personally felt that anyone who hadn't "been through it" had no right to second guess their decisions, and that if they found it necessary to end their patients' suffering, they probably had good reason. There were others -- doctors, public officials, family members of the deceased -- who believed that Pou and the nurses had perpetrated some kind of crime, but they are not by any means the only ones who think the three women, and perhaps other Memorial staffers, deliberately ended the patients' lives.

Ultimately, "Five Days at Memorial" is a juggernaut assault on Things We'd Rather Not Think About, the first and most obvious of those things being disaster preparedness. Fink relates how Memorial's corporate owner, Tenet Healthcare, a commercial chain based in Dallas, avoided a truthful assessment of the hospital's vulnerabilities because fixing them would be too expensive, and besides, hadn't they made it through all of the other storms so far? The facility's hurricane plan, though 273 pages long, "offered no guidance for dealing with a complete power failure or for how to evacuate the hospital if the streets were flooded." Once the floods came, Tenet Healthcare expected city, state and federal agencies to rescue their patients and employees (other hospitals contracted with helicopter companies in advance in case of just such a crisis), and the agencies themselves proved spectacularly inadequate.

But the doctors' own profession also let them down. They were compelled to practice triage -- that is, the allocation of scarce medical resources, usually on a battlefield -- without any training or background in its protocols, and often in conditions of great physical exhaustion and distress. Is it better to evacuate the able-bodied, who have a better chance of survival, first, or the more severely ill? How do you decide who's most likely to make it? Is it permissible to send a very sick person out of a bad situation if you can't be sure adequate treatment awaits him at the other end? Should three nurses devote themselves to bagging a dying man while other patients need to be carried to waiting helicopters or boats? If most of us can't bring ourselves to condemn the doctors at Memorial Medical Center for whatever mistakes they may have made during those five days in 2005, it's because we all know they were forced -- alone, afraid and in the dark -- to make decisions that the rest of us have been putting off for far too long.

Correction: An earlier version of this book review read "The first part of Fink's book describes these five days from the perspective of over a dozen participants, although not from that of the book's central figure, Pou, who would not speak to her on the record." This is incorrect. Fink did interview Dr. Pou more than once, although Pou has never spoken on the record about some of the events described in "Five Days at Memorial."