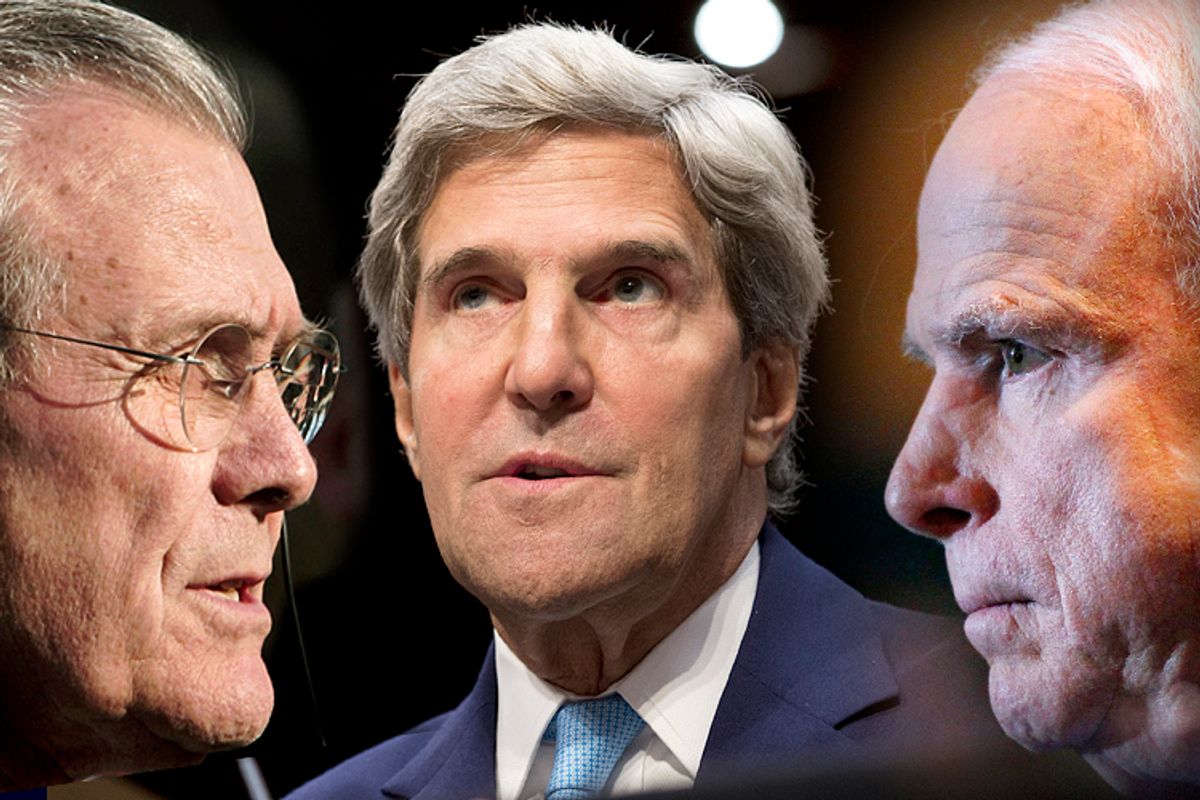 One telltale trait of narcissists is their ability only to see how their actions affect them, and not others. In the narcissist's mind, if doing something makes him feel good, then the act is inherently good -- even if it is terrible for lots of other people and makes an overall situation a whole lot worse.

This is a good way to understand the current proposal to bomb Syria.

From President Obama to British military leaders to the U.S. military planner who sculpted the attack plan, almost everyone acknowledges that sending cruise missiles into Syria will most likely not make anything better, will not stop the civil war and probably will not reduce human suffering. As the UK admits, the best (though certainly not guaranteed) chance of actually accomplishing any of those objectives is to mount a full-scale invasion.

Of course, that course of action could result in, among other things, thousands of U.S. casualties and roughly $300 billion a year in expenses. Understandably, those are costs America does not want to incur. And that's where the narcissism comes in.

Many Americans supporting a new war in the Middle East want to feel good about themselves. Many want to feel like we did "the right thing" and didn't stand by while chemical weapons were used (even though we stand by -- or use them ourselves -- when we're told that's good for America). But, then, many war supporters desperately want these heartwarming feelings without the worry that they may be face any inconvenient costs like higher taxes or body bags at Dover Air Force Base.

What emerges is a portrait of pathological self-absorption. That's right - despite the pro-war crowd's self-congratulatory and sententious rhetoric, this isn't about helping the Syrian people. Channeling the zeitgeist of that famous quote in "Broadcast News," this is all about us. To the pro-war crowd, if both feeling morally superior and avoiding any real sacrifice mean having to kill lots of Syrians without a chance of actually stopping their civil war, then it's worth the carnage, especially because it's half a world away.

Appreciating this insidious psychology, our government has come up with a brilliantly inhumane solution that plays to the narcissism: The Obama administration proposes to lob cruise missiles into Syria to make us feel good about "doing something," even though most agree that such an operation won't make anything better -- and could make things worse. On top of that, our government is reassuring us that we won't have to sacrifice by claiming, as Secretary of State John Kerry did last night, that this does not constitute "taking America to war." This, even though Kerry previously admitted it could result in a larger ground war, even though the U.S. State Department is telling Americans to leave the region, and even though if another country lobbed bombs into the United States we'd most certainly see it as a war.

Then there is Kerry's rhetoric about the Assad regime itself. Only a few years after praising that regime, the Secretary of State has likened Syria to the Third Reich and this week to a "Munich Moment." That terminology is designed to evoke memories of the "Greatest Generation" and the Good War. However, Kerry's proposed response to this allegedly Nazi-level monster is not a full-scale societal mobilization a la World War II -- it is seemingly low-cost bombing raids a la Libya 1986.

Noting Kerry's rhetorical discrepancy isn't to argue for a full-scale invasion of Syria. After all, even though an invasion is probably the only thing with a chance of halting the humanitarian disaster in Syria, it comes with great risks and could end up being another Iraq. No, the reason to point this all out is to spotlight yet another insidious narcissism play -- one that seems to offer us an alluring bargain. As long as we support the air strikes, Kerry and the Obama administration seem to be offering us the chance to have it both ways. We get to feel like a new Greatest Generation -- and we get to feel like that without having to sacrifice anything. Meanwhile, because Syria is on the other side of the planet, we don't really have to care if the air strikes that make us feel so great end up killing lots of civilians and making things even worse for the Syrian people.

Finally, there are all the unasked questions about the chemical weapons attack that is supposedly motivating the Obama administration's desire for military action. United Nations investigators haven't even filed their report yet, U.S. intelligence officials admit the proof is not a "slam dunk," and Sen. Tom Harkin (D-IA) says that what he's seen "raises more questions than it answers." At the same time, as Rep. Alan Grayson (D-Fla.) documented in the New York Times, the administration is asking congressional lawmakers to endorse military action, but is actively preventing those lawmakers from verifying whether the chemical weapons claims about the Syria regime are true.

Yet, despite all that, and despite the government's recent history of lying about WMDs, the pro-war crowd nonetheless simply assumes that what the Obama administration is alleging is unquestionably true. Making such an assumption is, in part, another expression of narcissism.

Simply put, conceited narcissists don't seem to care whether the entire case for the war they are advocating is actually rooted in verifiable fact, because their focus is on their own feelings. More specifically, they care only about their desire to feel heroic, righteous and moral, whether or not the entire narrative that makes them feel that was is actually true. Additionally, they know they don't have to fear any consequences of  ignoring evidentiary questions and focusing on their own desire to feel heroic. After all, even if the case for war ends up being a fraud, it won't personally affect them because their beloved cruise missiles won't be blowing up them or their families.

No doubt, the government's motives for a war with Syria have little to do with moral opposition to chemical weapons. The geopolitics of Syria affect everything from oil to Iran to Israel to the defense budget - and those concerns might be what's really driving the push to war. But the public sales pitch for war cannot dare admit that because such a truth is taboo. Thus, the warmongers are trying to appeal to our sense of self-worth. They assume that we are so narcissistic that it will be easy to build support for killing other people with long-distance bombs, as long as most Americans aren't asked to sacrifice at all with higher taxes or casualties, and as long as all the ensuing carnage makes Americans feel like good, decent, moral people.

Regardless of the consequences, the narcissists will indeed feel good, decent and moral as long as the bombs start dropping (i.e., "doing something"). They are narcissists -- so they don't care about anything other than their own feelings. But for the rest of us, the question remains: How good, decent or moral is it to drop bombs on people when that probably won't make things better, and when it could easily make things far worse?