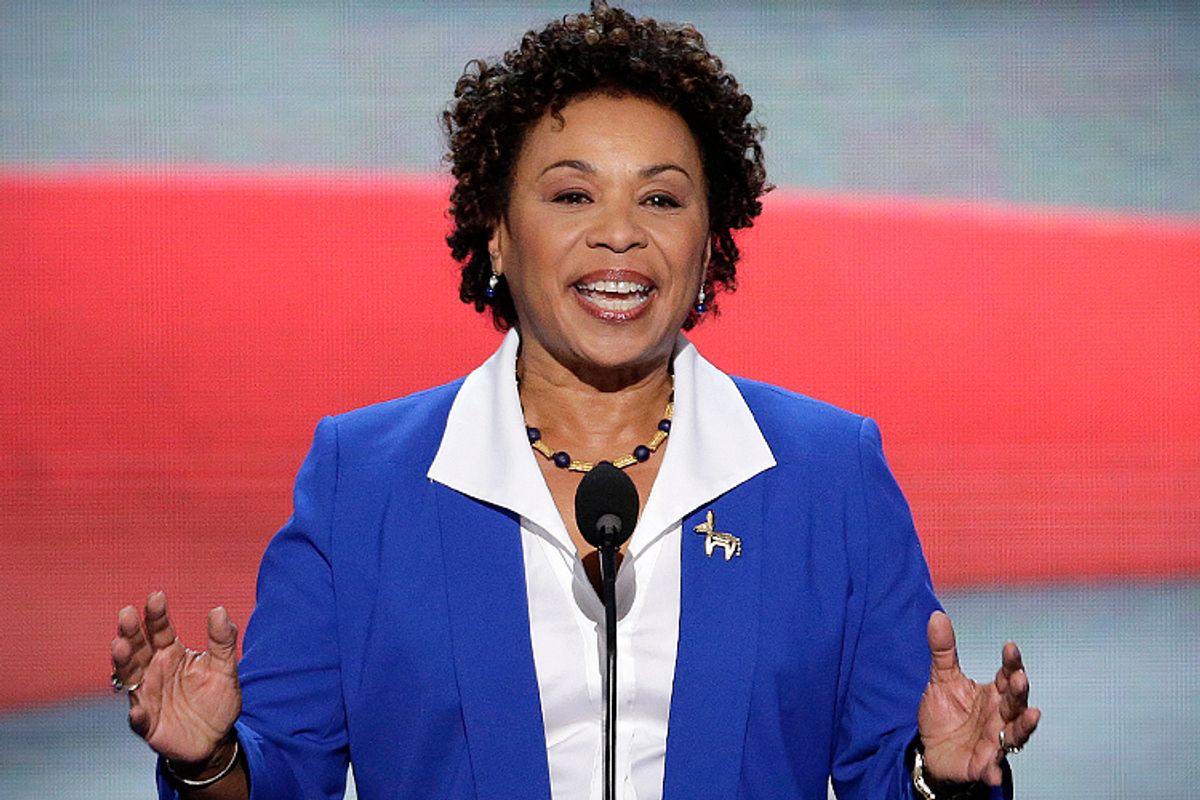 Rep. Barbara Lee was the lone member of Congress to vote against authorizing George W. Bush to strike Afghanistan in the wake of 9/11. Now, by all accounts, she’s on the side of the majority when it comes to the question of military strikes against Syria to punish Bashar Assad for violating international law and using chemical weapons. If the vote were held today, President Obama would almost certainly lose in the House of Representatives, which is why he’s making an unprecedented political pitch for his Syria plan, granting interviews to six major networks, including Fox News.

"When there's a breach this brazen of a norm this important, and the international community is paralyzed and frozen and doesn't act, then that norm begins to unravel," Obama told ABC News. "If that norm unravels, then other norms and prohibitions start unraveling, and that makes for a more dangerous world, and that then requires even more difficult choices and more difficult responses in the future."

But Lee, who agrees the world needs to respond to Assad's chemical weapons use, is making a pitch of her own. As Greg Sargent reported earlier Monday, she is circulating a letter to her House colleagues asking them to back a resolution that would commit the U.S. to exhausting all diplomatic solutions to resolve the Syrian conflict, something Lee doesn’t believe the administration has done yet. The resolution would back efforts to prosecute Assad’s use of chemical weapons through the International Criminal Court, establish an international Syrian war crimes tribunal, strengthen the targeting of Assad’s assets and require Syria to grant humanitarian aid to civilians and refugees.

I spoke to Lee Monday morning about why she doesn’t believe “going to war will lead to a negotiated settlement” in Syria, and the kinds of diplomatic alternatives she thinks could make a difference.

That’s hard to answer because all this has to do with classified material and briefings we’ve gotten. But I’m where the administration is on that. I’m pretty confident. I think the public information that you have, too, is pretty compelling.

But there’s a lot of controversy over our insisting on 1,549 dead, including 400 children. British and other humanitarian groups are closer to 400 dead. What accounts for that discrepancy?

Again, a lot of what you’re asking is on the classified side and I really don’t think I can go into that. OK?

Sure. Let’s talk briefly about the Syrian rebels, if you can. John Kerry didn’t do himself any favors last week by downplaying the extremist elements within the rebel coalition and quoting a paid rebel advocate, Elizabeth O’Bagy, who even claims they’re getting more moderate. What do you believe is the makeup of the rebel forces and how does that factor into your stance on intervention?

Well, I have to applaud the president for not putting the United States in the middle of a civil war in which we don’t know who’s who. We do know that al-Qaida is part of the opposition. But many groups are. The president has been smart about not getting involved in that, even though Sen. McCain is pushing it.

Rep. Chris Van Hollen is trying to craft a very narrow resolution, backing limited strikes to degrade Assad’s capacity to deliver chemical weapons. Is there any resolution that backs military force, however narrow, that you would support.

I can’t see myself supporting any military options at this point. As I’ve always said, I’m not a pacifist. But the use of force at this point would create more havoc, more violence, more death. I’m concerned about the possibility of retaliation, of regional conflict or war breaking out, I’m concerned about more innocent lives being taken. I think there are non-military alternatives that we have to push hard. No one says it’s going to be easy, but we have to get to a negotiated settlement that the president and John Kerry talk about. Now some would insist that a strike is the only way you could get the Assad government to come to the table, but I don’t believe going to war will lead to a negotiated settlement.

But there haven't been a lot of diplomatic alternatives so far. The most specific recommendation I’ve seen is to work through the U.N. General Assembly; we know the Security Council won’t do anything, but go to the General Assembly and make our case and try to to get a referral to the International Criminal Court.

National Security Advisor Susan Rice is speaking to the Congressional Black Caucus today. How do you feel about the emphasis being put on the CBC as the president’s most loyal backers who therefore “ought to” support him on this?

I think everyone recognizes this is not personal or political on my part. I’ve been one of the president’s strongest supporters, even during the primary campaign, when a lot of [CBC] members were not there.

But again, this is a democracy, and every member of our caucus has the right to weigh in on issues of war and peace. I’m very pleased that our national security adviser, who I know and respect and admire, I’m pleased we’re going to be meeting with her. I think it’s important that the CBC is being recognized for the clout and the power and the force that it is. And I know each CBC member will make their own decision based on which side of the argument they believe is credible. But again, I’m not speaking for the CBC.

Do you think the president gets the votes he needs at the end of the day?

He’s making a strong case, a very strong case, but members are -- you know I voted against the blank check we gave to George Bush in 2001, but the public was not there. Now, some members struggled through that vote, but voted for it. This is a lot different now, in terms of constituents and the voices of the American people and where people are. I think this is a new dynamic, so I’m not sure. I think this week will tell the tale. And this is why we asked him to come to Congress, and he rightfully did that, to engage in this debate so people would understand the issues on both sides. But I certainly don’t intend to vote [for a military strike], I think it’s counterproductive.