Not only do children of rich alumni get admission preferences, now they can get taxpayers to help them, too! 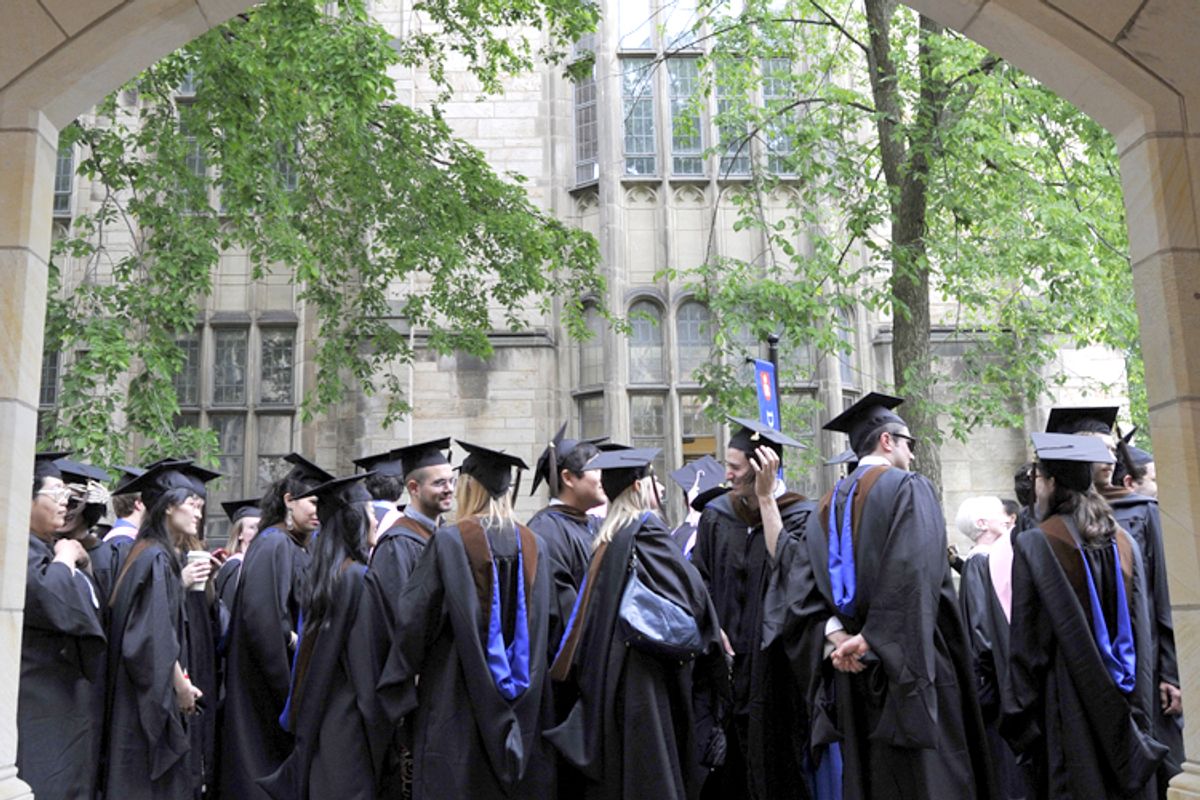 Legacy preference in college admission, or the practice of selecting the offspring of alumni over other qualified candidates, was originally a strategy developed to grandfather Jewish applicants out of admission. Though the policy’s intention has changed, it remains the reality that as American students head back to campus this fall, 10 to 25 percent of them do not deserve their spots. They’re “legacy admits,” the kids who got a boost via birth.

Quite a boost, in fact. In their 2005 paper “The Opportunity Cost of Admission Preferences at Elite Universities,” Princeton scholars Thomas Espenshade and Chang Chung found that legacy status gives fortunate applicants the equivalent of an additional 160 points on the former 1,600 point SAT scale. One hundred sixty points is no small adjustment; on the contrary, it’s the sort of improvement hopeful high schoolers bury their noses in books for. Yet it comes gratis to a set of students already privileged enough to be born to graduates of prestigious institutions.

Legacy preference seems to intensify in effect toward the upper end of university rankings, rendering entry into prestigious institutions with valuable resources and facilities especially daunting for poor students without alumni parents (or for first-generation applicants with no graduates in the family). Journalist Daniel Golden reports that nearly 90 percent of elite institutions calibrate their scales in favor of legacy status when weighing applicants against one another; as a result, numerous top-tier universities feature legacy acceptance rates far higher than overall acceptance rates. Legacy, in other words, is a sort of affirmative action for the wealthy, with fewer outraged news specials featuring tearful interviews of rejected candidates.

Less exclusive schools also consider legacy status in admissions. But of particular concern in the case of legacy admission in elite institutions is what a degree from it confers. There is, of course, the top-notch schooling, the access to programs, resources and equipment that other schools cannot always afford, and ever-present “connections.” But through some combination of all those factors arises a path to power: Research by Thomas Dye of the Lincoln Center for Public Service shows that 54 percent of America’s corporate leaders as well as 42 percent of our government officials are all graduates of just 12 institutions – Yale, Harvard, Princeton and Stanford among them. In 2003, Harvard accepted 40 percent of legacy applicants compared to an overall 11 percent acceptance rate; Princeton’s numbers are quite similar.

For those looking to pass power and wealth down, legacy admission practices are a handy tool. Universities, who periodically masquerade as engines of social mobility, claim that legacy admission is merely a good business practice, necessary to coax their alumni to generously donate to their alma maters.

But if this is true, then alumni donations are not donations at all. Rather, they’re implicit transactions: alumni pay universities and receive additional admissions consideration for their children in return. That is the quid pro quo of the donation-legacy arrangement.

Yet, curiously, the Internal Revenue Service does not treat alumni donations as transactional payments. Instead, it treats them as charitable giving. As a result, alumni that make such donations are entitled to deduct the amount of their donation from their income for tax purposes. In so doing, the richest alumni receive a tax subsidy of 40 percent of the amount of their donation. That is, the public ultimately funds as much as 40 percent of any given legacy admissions payment.

Under most understandings of charity, it is not clear why any donation, alumni or otherwise, to an elite educational institution should be considered charitable. Top tier universities like Harvard and Princeton, although nonprofits, charge high tuitions and enroll nearly 25 rich students per each poor student. In any non-educational context, few would call an organization with similar characteristics a charity. But the case for alumni donations being charitable is even thinner. Because alumni donations purchase improved admissions chances, they violate the most fundamental rule of charity, namely that it not enrich the giver.

In addition to being poor public policy, these charitable tax subsidies generate a disgustingly unjust spectacle. The vast majority of parents do not have an educational background that enables them to benefit from the donation-legacy system. Yet these parents are forced, through the tax code, to help fund alumni donations that intentionally militate against their own children’s chances of admission to the elite institutions they may otherwise be well qualified for. Children of poor parents in particular already endure extraordinary burdens competing against children of rich parents from elite universities; publicly financing the rigging of college admissions systems against poor children is yet another thumb on the scales against their success.

There is, of course, more to going to college than the education itself. Universities, especially elite ones with more than a little tarnish on their casually liberal consciences, tend to tout the aid they give and programs they provide for students from poor families, many of whom are first-generation college students. A university education is intended to provide an opportunity for self-betterment, and for gainful employment of some kind. These promises are perhaps most appealing to the students they now seem least available to, who do not have connections to rely on for hiring, or inheritances or trust funds to look forward to for support. Legacy admissions represent more, then, than another conspiracy of the privileged: they’re quiet contracts built on broken promises.

In the days of Jewish quotas, students with lofty educational goals had little recourse when turned away from institutions they were well qualified to attend due to their heritage. Today’s legacy preference practices carry on another legacy of dreams hushed up, potential lost, and opportunity cut off. And now they do it on the public dime.