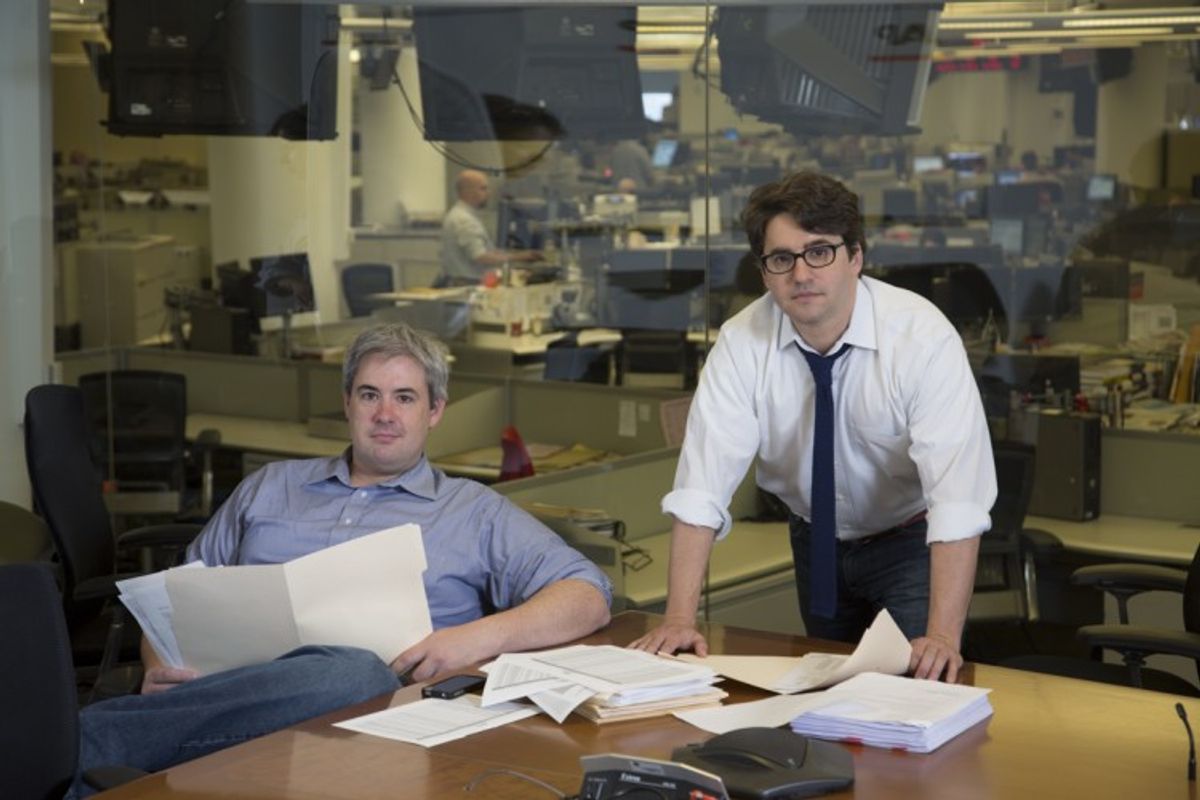 We might not know much about the New York City Police Department's spy programs, were it not for AP reporters Matt Apuzzo and Adam Goldman. We might not know that the vast, 30,000-plus police force contains within its own ranks a "mini-CIA," headed by a former CIA analyst -- a fixture otherwise unheard of in the history of municipal policing. We might not know that the NYPD designated entire mosques as terrorist organizations, to enable broad and invasive surveillance of whole Muslim communities. Nor would we know that entire intelligence units within the NYPD, dedicated to thwarting terror attacks by spying on Muslims, yielded few criminal cases in the years since their post-9/11 inception. Apuzzo and Goldman are the sine qua non of NYPD sypcraft revelations.

In their new book, "Enemies Within," the pair extend the work done that earned them a Pulitzer Prize last year and offer up a damning tale of New York policing's secrecy and dragnet surveillance in the post-9/11 years. Via gumshoe journalism, document sifting and interviews, the authors are able to build a narrative based around one troubling premise: After the twin towers crumbled, in the name of counterterrorism, it was open season for preemptive policing (particularly but not exclusively of New York's Muslim communities) and with it the decimation of First and Fourth Amendment protections.

"Enemies Within" is a page-turner. The recent history of the development of a covert intelligence division within the NYPD is intertwined with the racing narrative of national intelligence efforts to thwart the plan of Afghan-American al-Qaida operative Najibullah Zazi to bomb the New York subway system -- a plan that the giant NYPD surveillance apparatus totally missed; "He was right under the NYPD's nose and they missed him," Goldman told Salon.

Speaking to Salon, Apuzzo and Goldman -- as effusive on NYPD malfeasance in person as on the page -- insisted that they were no activists in their journalism ("We're not the WikiLeaks of the NYPD," joked Goldman). But in an era of mainstream journalism that all too frequently toes the line of government and law enforcement officials, an act of journalism that pushes for transparency when there is opacity and reveals official failures and wrongdoing is a refreshing and radical act indeed.

Apuzzo and Goldman's findings carefully illustrate not just the fact of widespread surveillance of Muslims (as well as activists and anarchists) in New York and beyond, but the apparatus that enabled the NYPD to spread its dragnet. As Apuzzo told Salon:

What’s significant here is not what the NYPD is doing is illegal, the significance is, “This is what we have made legal over the past decade in the name of fighting terrorism.” It’s exactly what you’re seeing with the NSA debate in Washington. There’s no question that they passed the Patriot Act, and that it allows all collection of business records. What you’re seeing is, “This is how the government is using that law to spy on its own people.” Same thing in New York. They got the rules changed. What we’re saying is, “This is how they’re using those rules to spy on Americans.” Whether it’s legal or not, if a judge wants to weigh in on that it's fine, but we just want people to know how these laws are being applied, how these rules are being applied.

Apuzzo's point is exemplified in "Enemies Within" with the story of how CIA analyst David Cohen was brought in to the NYPD by Ray Kelly to head the department's secretive intelligence division after 9/11. Cohen, in order to enable the sort of policing that was based in profiling, prefiguration and preemption as opposed to responding to actually committed crime, saw the significant undoing of the Handschu ruling, which had limited police ability to spy on U.S. citizens based on their political or religious affiliations. As Apuzzo commented:

The Handshu case stems from the NYPD’s history in the '60s and '70s of spying on African-Americans, liberal protest groups, antidwar advocates, in extremely intrusive ways: infiltrating their groups, keeping tabs on who’s organizing, and it is a lot of the same things we’re seeing going on now in the name of fighting terrorism. After 9/11, the NYPD went to the judge in the Hanschu case and says, “Look, we can’t wait for actual evidence of crime. We have to start investigating before there’s evidence of a crime.”

Goldman added that "Cohen told the judge what he was going to do":

Essentially he said, “We can’t let the First Amendment stop us from going into houses of worship, mosques, because that’s where the terrorists might be.” Did the judge envision he would actually label a mosque a terrorist organization and conduct these open-ended investigations for years without ever making a case? I don’t know. Cohen wasn’t shy about what he was going to do.

Perhaps one of the most perturbing revelations from "Enemies Within," which was missing from the authors' original Pulitzer Prize-winning series on the NYPD's spying on Muslims, is how the police designated entire mosques as terrorist organizations. The NYPD, Apuzzo and Goldman discovered, were able to spy on pretty much any worshiping Muslim in the city by virtue simply of affiliation to a religious institution. Again, the significance is not just that the police spied on whole Muslim communities, but that they danced a legal tango using terrorism designations to carry out unbounded, unconstitutional surveillance within the remit of the law. Goldman commented:

There were pieces we didn’t know when we were doing the Pulitzer series. We knew the informants and the undercovers were in the mosque, but it was only later while we were reporting the book that we figured out why [Police Commissioner Ray] Kelly said legally he could do this, and that’s by designating the mosque a terrorism organization. That gave him the ability to gather intelligence in these mosques, year after year after year, without ever making a criminal case against the mosque itself or any of the other organizations he targeted. So that – for me, that was a huge revelation, because it was a piece of the puzzle we didn’t have during the Pulitzer series, so for the first time we had a holistic understanding of what was going on.

In advance of the release of "Enemies Within," Ray Kelly called the book a "fair amount of fiction." As a riposte, and in the name of transparency, Apuzzo and Goldman posted online an interactive addendum to the book: a host of documents used to back up their reporting. "We feel like we owe it to readers to put these documents out there, especially the ones we’re citing in our endnotes, and let the readers decide," said Apuzzo. "Unlike the NYPD, we want to be completely transparent," Goldman added.

And indeed, from the thousands of documents obtained by the reporters (only a section of which were put online), stories continue to spring beyond the bounded pages of their important book. On Tuesday, the New York Times' Michael Powell reported that, based on documents obtained by Apuzzo and Goldman, it can be shown that the NYPD used "reed-thin evidence" to cast a broad surveillance net over the city's anarchist and leftist networks following the detonation of an incendiary device outside a Times Square Army recruitment center. Only a window was smashed in the incident, but based only on a blog post on an anarchist website, the NYPD was able to spread a sprawling surveillance dragnet. Powell wrote:

We are accustomed to thinking of New York’s police spying and surveillance as a phenomenon afflicting Muslims, just as we are accustomed to thinking of stop-and-frisk tactics as a problem afflicting male blacks and Latinos. In fact, from the Republican National Convention to bike rides through the city to Occupy Wall Street, police undercover spying is often as omnipresent.

While Goldman and Apuzzo hold fast to the tenets of traditional "objective" journalism -- ever taking pains to present the NYPD in the fairest possible light -- their work has formed part of the nexus, bolstered by anti-stop-and-frisk efforts, pushing for change and oversight in the department. Without advocation or incitement, the authors do a great deal by shedding light on a dark place. Ahead of today's mayoral primary, Goldman told Salon, "I think all New Yorkers should read this ['Enemies Within']. If I lived in New York and I was funding this apparatus, I’d like to know where the money was going."