Pynchon's latest is a story of geeks, the Internet, New York, and 9/11 -- and, of course, conspiracy theories 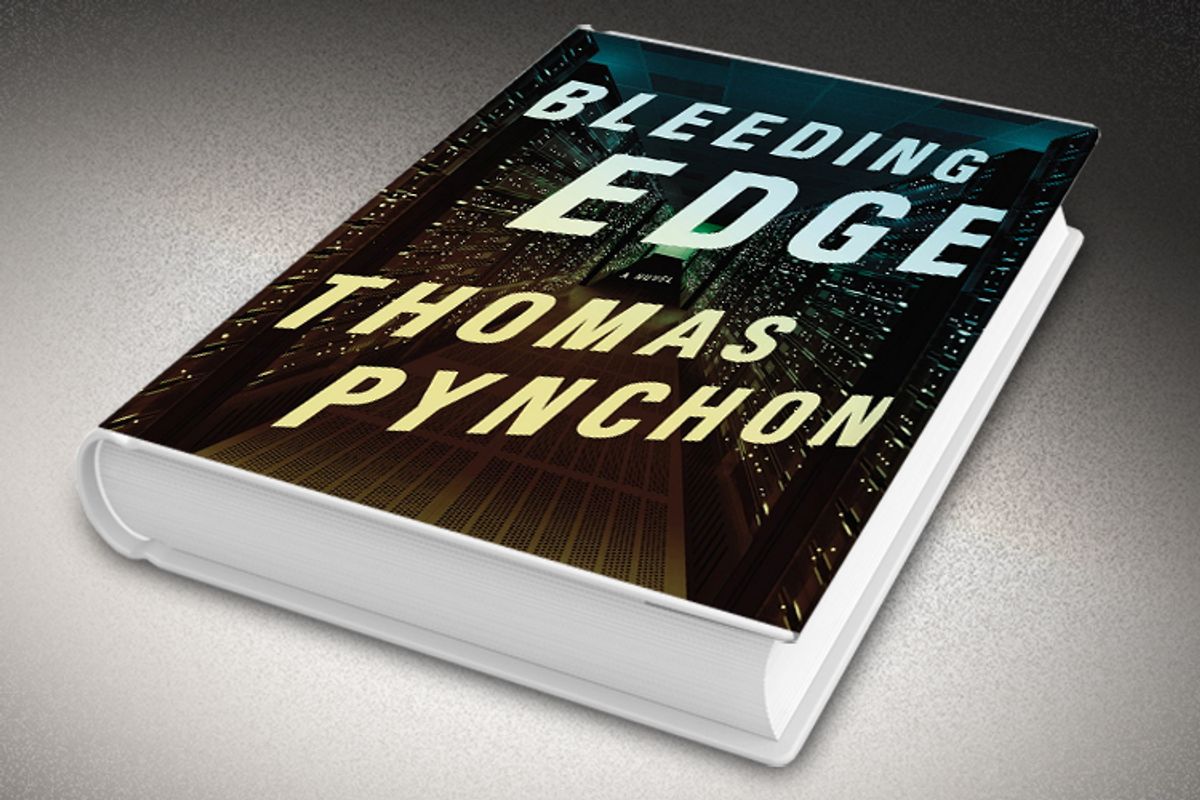 "Bleeding Edge" started out all fun and games. Before cracking the spine, I grinned at how aptly Thomas Pynchon's title worked for a historical novel set during the fin-de-siècle dot-com crash. A phrase that once served as a self-congratulating signifier of way-ahead-of-the-curve-ness, bandied about by preening venture capitalists, start-up CEOs and phalanxes of blow-dried public relations myrmidons, had become appropriately musty and nostalgic, exquisitely dated. Very deft, Mr. Pynchon! How far we've come, that the very words "bleeding edge" now summon up the past.

Then I recalled that in the late '90s I wrote a column for a magazine called Web Review titled "The Bleeding Edge." My grin went a little lopsided. Huh. I've been reading Pynchon for more than three decades; was there any chance that he had been reading me? Spying on me?! In short order, I spotted two more mildly paranoia-inducing data points: One character wears a T-shirt with the initials UTSL -- short for "Use the source, Luke" -- a reference to the information-wants-to-be-free source code so willingly shared by free software hackers. Well, OK, I still own a (frayed at the edges) T-shirt declaring "May the source be with you."

Two other software developers who appear in "Bleeding Edge" -- Jacob and Lucas, refugees from California ("too much sunshine, self-delusion, slack") looking for greener pastures in New York -- are said to have "came of age into VRML." To see the letters VRML in 2013 is like seeing an Egyptian mummy at the Apple store. But I wrote a feature for Web Review on the birth of the Virtual Reality Modeling Language, 15 years ago.

When I first heard that Pynchon was writing a novel set in the greed-blasted ground zero of the dot-com bust, I was skeptical. Where the hell was he during the great consolidation of the online pet portal sector? But now I have realized that he knows too much. If nothing else, the synchronicity between my bureau drawers and his paragraphs showed that he was getting all the little details right, the HotBot and Zima and Daikatana name drops and in-jokes, the flavor of how geeks talked and VCs slithered. All right. What could be more in tune, anyway, with the loopy paranoia that pervades Pynchon's best work, than the deranged, hubristic suspicion that the reviewer might be part of the story? At the very least, some sort of disclaimer was certainly called for.

Like I said, fun and games! But then it got serious. As I sank further into the depths of this brilliant and wonderful novel, I realized that the words "Bleeding Edge" were meant to evoke more than just period-piece accuracy. They also describe the wound ripped into the hearts and minds of Americans by the events of Sept. 11, 2001. A wound still gushing arterial blood, a wound that explains so very much about our current traumatized culture. "Bleeding Edge" is hardly musty. "Bleeding Edge" chronicles the birth of the now -- our terrorism-obsessed, NSA-everywhere, smartphone Panopticon zeitgeist -- in the crash of the towers. It connects the dots, the packets, the pixels. We are all part of this story. We are all characters in Pynchon's mad world.

"Bleeding Edge" is a novel about geeks, the Internet, New York and 9/11. It is funny, sad, paranoid and lyrical. It was difficult to put down. I want to read it again.

The plot of "Bleeding Edge" follows Maxine Tarnow, a Beretta-packing defrocked fraud examiner, as she investigates strange goings on at a dot-com computer security firm called hashslingrz. Maxine might live on the Upper West Side, but she bears more than a passing resemblance to Raymond Chandler's vodka gimlet-drinking Philip Marlowe, except for the minor details of being female and Jewish and the mother of two kids who play a lot of video games and miss their estranged father. Maxine is a tough cookie, a wisegal, a forensic accountant who doesn't quite play by the rules.

And yes, "Bleeding Edge" borders on the Chandleresque noir, if we're allowed to be noir outside of California. (No, I'm not resentful that the best novel yet written about the dot-com era is set in New York's Silicon Alley, and not California's Silicon Valley. OK, yes, I'm a liar.) But what could possibly be more noir than a novel set in New York that mostly takes place in the summer before 9/11? The twin towers cast a foreshadow over the first two-thirds of "Bleeding Edge" that is harder to ignore than an airplane crashing into a skyscraper. Early on, Horst Loeffler, Maxine's separated husband, a commodities trader, takes his boys to eat a meal at Windows on the World, the restaurant at the top of one of the towers. The building sways in the high winds, but Horst's co-tenant assures one nervous child not to worry: the building is "built like a battleship."

Yeah, right. As one might expect from the author of "The Crying of Lot 49," "Gravity's Rainbow" and "Mason & Dixon," everything is connected in "Bleeding Edge" -- even, or especially, when that means verging perilously close to truther territory. Every thread that Maxine pulls on is hyperlinked, one way or another, to the day the towers come down.

We've got government spooks, suspicious Mideast entanglements, a smorgasbord of financial irregularities, Russian mobsters, warring hackers (both good and evil) all wrestling in the detritus of a just-concluded explosion of dot-com excess. In other words: New York, New York!

And, I've got to confess, in Pynchon's hands, truther conspiracy theories never sounded so good. Something is definitely fucking rotten in the age of "post-late capitalism run amok," in the "dramas of faceted intricacy ... teeming all around" Maxine, who, as she keeps bulldogging her way into the heart of Deep Web darkness, gets increasingly alarmed "at the perimeters of ordinary greed overstepped, the engines of night and contrived oblivion, out on the tracks, cranking up to speed ..." After all, as Maxine tells Reg Despard, the freelance documentary maker who discovers something awry at hashslingrz, "paranoia is the garlic in life's kitchen, right, you can never have too much."

One must recall, at this juncture, that Pynchon wrote this book before the revelations of Edward Snowden. The good folks at Penguin must not be able to believe their luck. "Bleeding Edge's" timing cuts like a samurai sword. The Internet has turned against us. "Out in the vast undefined anarchism of cyberspace, among the billions of self-resonant fantasies, dark possibilities are beginning to emerge."

Ah, the Internet -- that "Mardi Gras for paranoids and trolls ..." Maxine's father, Ernie, explains to her that the Internet was a Defense Department project designed to ensure that American military command-and-control systems would survive in the event of a nuclear war -- thus it was "conceived in sin, the worst possible. "

Far from representing freedom -- the freedom to share and hack -- the Internet, declares Ernie, represents the end of freedom.

"Call it freedom, it's based on control. Everybody connected together, impossible anybody should get lost, ever again. Take the next step, connect it to these cell phones, you've got a total Web of surveillance, inescapable."

Oh hindsight, always so 20-20. A decade after the fact, Pynchon enjoys the novelist's privilege of seeing how things played out that many of us toiling in the trenches at the time were too exhilarated or blindered to see. Of course, we didn't know that 9/11 was coming, so we couldn't anticipate how security-state paranoia would necessitate turning the emerging network into a system of control. It seems obvious now. What we built out of our desire to share and our frantic lust for an IPO killing set us all up for the hangman. From Mountain Dew-fueled all-night coding sessions to NSA omniscience was just another hyperlink to click.

In "Bleeding Edge," Pynchon has a jolly old time rousting about New York City -- his vivacity, really, is quite unseemly for someone 76 years old -- where in the world does he find all the energy? His writing is crisp and hilarious, laying waste all around him with city-that-never-sleeps abandon. But there is one extraordinary passage that I reread again and again; the fulcrum of the entire novel, the coat-hook on which everything hangs; that I have not been able to get out of my head ever since.

Pynchon is describing the end of an extravagant party hosted by the malign and dastardly Gabriel Ice. It is the "Geek's Cotillion," a self-conscious, ironic tribute/last gasp to the end of the first dot-com age. The date is Sept. 8, 2001. You don't have to read too closely between the lines to figure out what is up as the party winds down.

Faces already under silent assault, as if by something ahead, some Y2K of the work-week that no one is quite imagining, the crowds drifting slowly out into the little legendary streets, the highs beginning to dissipate, out into the casting-off of veils before the luminosities of dawn, a sea of T-shirts nobody's reading, a clamor of messages nobody's getting, as if it's the true text history of nights in the Alley, outcries to be attended to and not be lost, the 3:00 AM kozmo deliveries to code sessions and all night shredding parties, the bedfellows who came and went, the bands in the clubs, the songs whose hooks still wait to ambush an idle hour, the day jobs with meetings about meetings and bosses without clue, the unreal strings of zeros, the business models changing one minute to the next, the start-up parties every night of the week and more on Thursdays than you could keep track of, which of these faces so claimed by the time, the epoch whose end they've been celebrating all night -- which of them can see ahead, among the microclimates of binary, tracking earthwide everywhere through dark fiber and twisted pairs and nowadays wirelessly through spaces private and public, anywhere among cybersweatshop needles flashing and never still, in that unquiet vastly stitched and unstitched tapestry they have all at some time sat growing crippled in the service of -- to the shape of the day imminent, a procedure waiting execution, about to be revealed, a search result with no instructions on how to look for it?

It's an epitaph for dot-com excess, for pre-9/11 innocence, for that time when we could still joke about "the end of the world as we know it." It sings with an off-kilter poetry that Pynchon always aspires to, and when he hits, reads like nothing else we hear from any other writer on the planet. It is a dart thrown directly into the existential bull's-eye: Who among us isn't baffled by the search result we can't figure out how to find, but that still assaults us as we strive to make sense of daily chaos?

Fun and games? Maybe not. But I can't help thinking of a day in 1996 when I visited the Mission apartment of a young programmer to see a demo of a 3-D VRML world he had been helping to build. The guy was a dead ringer for a character in a Pynchon novel that wouldn't be written for another 15 years. He steered me through his model on his SGI Indigo workstation, and then he handed me some sheets of paper; the "spec" -- the first draft of the coding parameters for VRML -- a first stab at making the Snowcrashian Metaverse a possibility.