The right's Obamacare obsession is destroying the Republican Party 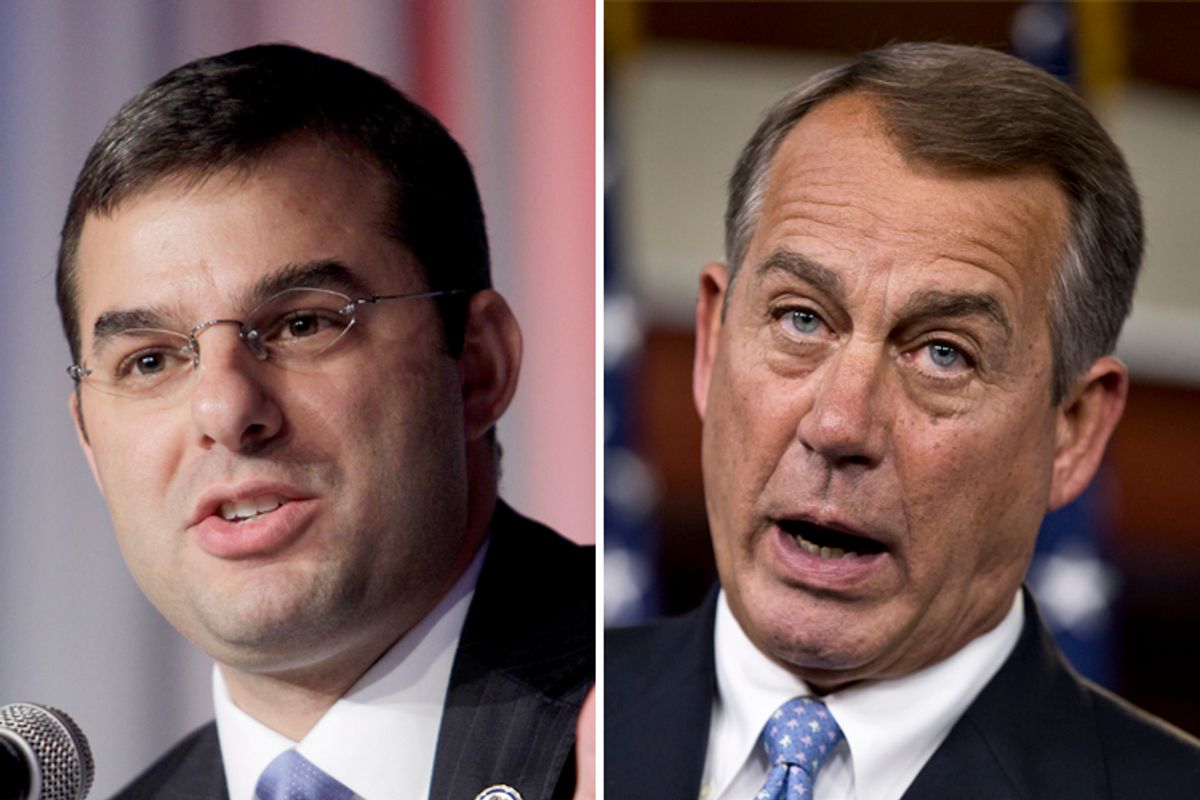 The right's Ahab-like determination to destroy Obamacare has so thoroughly overtaken the conservative wing of the GOP that its loyalists in Congress are about to squander an opportunity to hand Democrats a huge defeat in the fight over sequestration, and hasten the Republican crackup in the process.

Conservatives are poised -- once again! -- to align with progressives in temporarily handing control of the House of Representatives over to Nancy Pelosi, and protecting the poor from deep government spending cuts. All because GOP leaders don't think suicide is a wise political strategy.

You know the back story. Over the past few months, but most intensely during this August's congressional recess, the right organized itself around an impossible demand: no funding for the government unless President Obama agrees to defund his own healthcare law.

House GOP leaders correctly concluded that demand would earn the party a one-way ticket to complete blame for a government shutdown, followed by a swift, humiliating defeat in the fight over Obamacare. But the right's not really known for its openness to persuasion. So GOP leaders decided they'd try to hoodwink everyone instead. House Majority Leader Eric Cantor devised a strategy of pairing a symbolic vote to defund the healthcare law with a sub rosa effort to force semi-permanent austerity on the country.

The latter goal was actually achievable. You can read the legislative details here. But as of Tuesday night, conservatives in the House, along with allies in the Senate and advocacy groups in Washington, were prepared to make the grotesque the enemy of the merely awful.

I do not support the #hocuspocus plan that doesn't really defund #Obamacare.

"This is a legislative gimmick designed to provide political cover to those who are unwilling to fight to defund Obamacare," said Heritage Action CEO Michael A. Needham. "Any constituent who looks at this vote will know it is intended to look like a vote to defund Obamacare while failing to do so."

Amash and Heritage aren't mistaken, per se. But they and the rest of the right are too obsessed with Obamacare to focus on nuance.

What GOP leaders are trying to do is use this feint toward defunding Obamacare to disguise the fact that their bill also sets an otherwise unattainable precedent: That domestic spending should be held at sequestration levels in perpetuity. Appease the right with a dressed-up but powerless vote to defund Obamacare, and then hold the line for permanent sequestration against weary and confused Democrats.

If 218 Republicans could ignore their White Whale for just a moment and pass the House bill, Senate Democrats would kill the provision to defund the healthcare law, but probably be stuck with Republican spending levels. The GOP would both avoid a government shutdown and extract a major concession from Democrats for free.

But they probably can't pull it off. We'll see how the GOP's whip effort fares. If it fails then Pelosi will get to set the terms under which Democrats will vote to fund the government. Those would surely include no defunding Obamacare and probably no funny business with sequestration, thus dealing complete defeat to both Republican leaders and their internal antagonists in the conservative movement.

John Boehner would have to choose between suffering huge defections on another must-pass bill, or shutting the government to appease conservatives.

All of which is to say the right's Obamacare Ahabism isn't just protecting Democrats from their own placative instincts and destroying the Republican leadership's best laid plans. It's destroying the party itself.