How do you dispose of chemical weapons?

With Russia potentially striking a deal to store Syria's chemical weapons, here's a guide to their use and storage 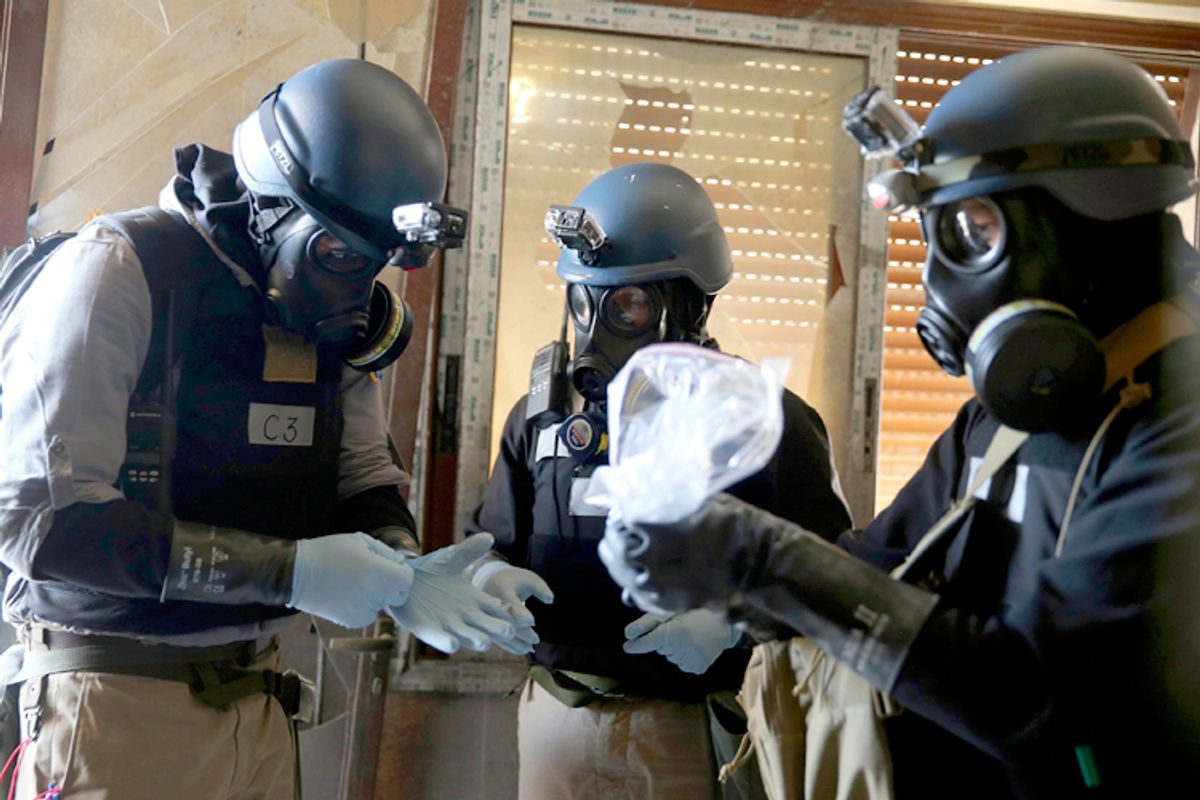 A U.N. chemical weapons expert, wearing a gas mask, holds a plastic bag containing samples from one of the sites of an alleged chemical weapons attack in the Ain Tarma neighbourhood of Damascus August 29, 2013. (Mohamed Abdullah/Reuters)
--

In the midst of a particularly brutal civil war, international attention focused on the Syrian government's use of chemical weapons against civilians. With a potential deal on the table for Russia to take and store Syria's chemical weapons, here is a look at what chemical weapons are, and what it takes to safely dispose of them.

What are chemical weapons?

Broadly, a chemical weapon is a toxic chemical delivered by an explosion, such as a bomb, artillery shell, or missile. Chemical weapons injure and kill people through horrific reactions including choking, nerve damage, blood poisoning, and blistering.

The first chemical weapons, used in World War I, were gases released from canisters. Today, chemical weapons are typically liquids carried in bombs or shells. The chemicals, like sulfur mustards (commonly called mustard gas) or sarin, are dispersed in the air like a mist. Technically, this means they aren't gases; they're liquid aerosol, with droplets carried through the air.

When have chemical weapons been used?

World War I saw the first major use of chemical weapons, with 124,000 metric tons of chemical agent unleashed by nations including the UK, Germany, and France.

Throughout the Cold War, both the Soviet Union and the United States developed and stockpiled chemical weapons. While the United States never used them in war, a declassified CIA document alleges Soviet use during their invasion and occupation of Afghanistan.

Egypt was the first country to use chemical weapons in war after World War II. Egypt joined a civil war in Yemen in 1963, where the Egyptian militarty dropped sulfur mustard bombs on enemy troops sheltering in mountain caves.

Iraq's dictator Saddam Hussein used sulfur mustards and the nerve agent Tabun against Iran in the 1980s, during the Iran-Iraq war, and against the Kurdish people in northern Iraq in 1988.

Chemical weapons appear to have been used against civilians in the ongoing Syrian Civil War, between the dictatorial regime of Bashar al Assad and a loose collection of rebel groups. Syria's chemical weapons stockpile predates the recent conflict. Following a series of military defeats in war against Israel, the Syrian government began amassing sulfur mustards, sarin, and VX (a nerve agent). Syria could have acquired its first chemical weapons as early as 1973, and publicly admitted to a stockpile in 2012; a foreign ministry spokesman said the weapons would only be used against foreign intervention.

There is! In fact, there have been several. The first treaty banning chemical weapons actually predates their use. At the 1899 Hague Convention, signatories agreed to not use "Asphyxiating or Deleterious Gases." Germany, France, and the UK broke this agreement during WWI.

Currently, chemical weapons are banned by the Chemical Weapons Convention, a treaty adopted by the General Assembly of the United Nations that took effect in 1997. It bans the creation and use of chemical weapons, mandates their destruction, and encourages international cooperation in chemistry and the chemical trades. Five countries have not signed the treaty: Angola, North Korea, Egypt, South Sudan, and Syria.

The convention is fairly strict about what counts as a chemical weapon. Agent Orange, a herbicide and defoliant used by the United States in the Vietnam War, does not count as a chemical weapon under the rules of the treaty, despite the fact that it has been linked to cancer, heart disease, and birth defects.

How do militaries dispose of chemical weapons?

Al Mourani, director of the USAF counterproliferation center in Alabama and author of Chemical Demilitarization: Public Policy Aspects, tells Popular Science that disposal depends on how the weapon was designed:

There's storage in ton containers, where a bulk agent is stored in a metal container with a spigot on it, and then there's munition-filled chemical weapons. These were not meant to be disposed; it was kind of a design oversight, if you will. No one thought about breaking them open, draining the chemical agents, and safely disposing them. Everyone thought you were going to shoot them. That's how you get rid of them.

Can disposal be done on the battlefield?

It can be, though not without some problems. Mourani describes a process used in Iraq in 1991. "We'd come across a bunch of rockets, and you suspect there might be some chemicals in them," he says. "The field expedient way, if you're in a hurry, is to blow it up in place." Army Explosive Ordinance Demolition teams would use a 10-to-1 ratio of explosives to suspected chemical weapons. The heat from the explosives will destroy almost all of the chemical agent in the weapons, and the "very, very low concentration" of whatever wasn't destroyed was dispersed in the air, hopefully harmlessly. There is a chance, however, that this dispersal was one of the many factors behind Gulf War Syndrome, an illness seen in veterans of the Persian Gulf War.

How does the U.S. Arms dispose of chemical weapons?

The Army has a mobile chemical weapons disposal unit. The United States has nine chemical weapons sites where America's stockpile of chemical weapons is being disposed. While the mobile site is getting press related to Syria, Mourani thinks it has a more mundane purpose. Two disposal sites, one in Pueblo, Colo., and another in Richmond, Ky., are both under construction, and, Mourani says, "they both have leakers" in their stored chemical weapons, so "the mobile unit goes out to neutralize the chemical agent."

So if the chemical gets burnt, what about the metal shell it was in?

Mourani explains: "You have to thermally decontaminate the metal. You can't get the heat high enough to vaporize metal, but what you can do is heat up the metal munitions and burn the tonnage that comes with it. Once that's done, the metal scrap can be sold to industry." The thermal decontamination is done at extremely high temperatures.

Are some chemical weapons easier to destroy than others?

There are precursor chemicals, which are the components used to make a chemical weapon that aren't the weapon itself yet, and those are easier to dispose, because they might have industrial applications and can be sold to companies. For the weapons themselves?

"As far as sarin, mustard, or VX goes, they all have challenges," says Mourani. Sarin can evaporate when handled. Mustard and VX can spill into the soil, which then means the soil has to be dug up and cleaned. But other than that, it's basically the same process: they all go into a tank for neutralization or an incinerator the same way.

What countries have experience disposing of chemical weapons?

The countries that have the most experience getting rid of chemical weapons are the United States and Russia, owing to their massive Cold War chemical weapons stockpiles. According to Mourani, Russia had 40,000 tons at its peak, while the United States amassed around 30,000 tons. Both nations have used incineration and neutralization to dispose of chemical agents on a large scale.

Has a country besides Syria ever given up its chemical weapons to another for disposal?

Yes! One good example is Albania, which had 16 metric tons of chemical weapons that they gave to the United States for disposal. Destruction was completed in 2007 and cost $48 million.

How long does it take to clean up a chemical weapons site?

Years, more likely decades, depending on the size of the program. In 1986, Congress passed a law mandating destruction of chemical weapons in the United States, and while a tremendous amount of the stockpile has been destroyed, the work will continue well into the next decade, with the last site set to start disposal in 2020.

Any way you cut it, you're going to have waste. The bottom line is: can it be done safely and effectively? Absolutely, especially when you pour $2 billion per disposal site. When money is no object, you can certainly make it safe enough for the surrounding community. You take your time, you do it slowly, it will get done.

Disposal in Syria presents significant problems: "You can't do it slowly, you can't do it safely," Mourani says. "There's going to be an obvious security risk the whole time you're trying to dispose of these things. It's going to get very expensive, very challenging to maintain security, to move chemical weapons and destroy them."