The jerks got away with it! 5 years after economic collapse, they're still smiling

Five years ago this week, titans of finance wrecked the American economy. Here's why they're still happy as ever 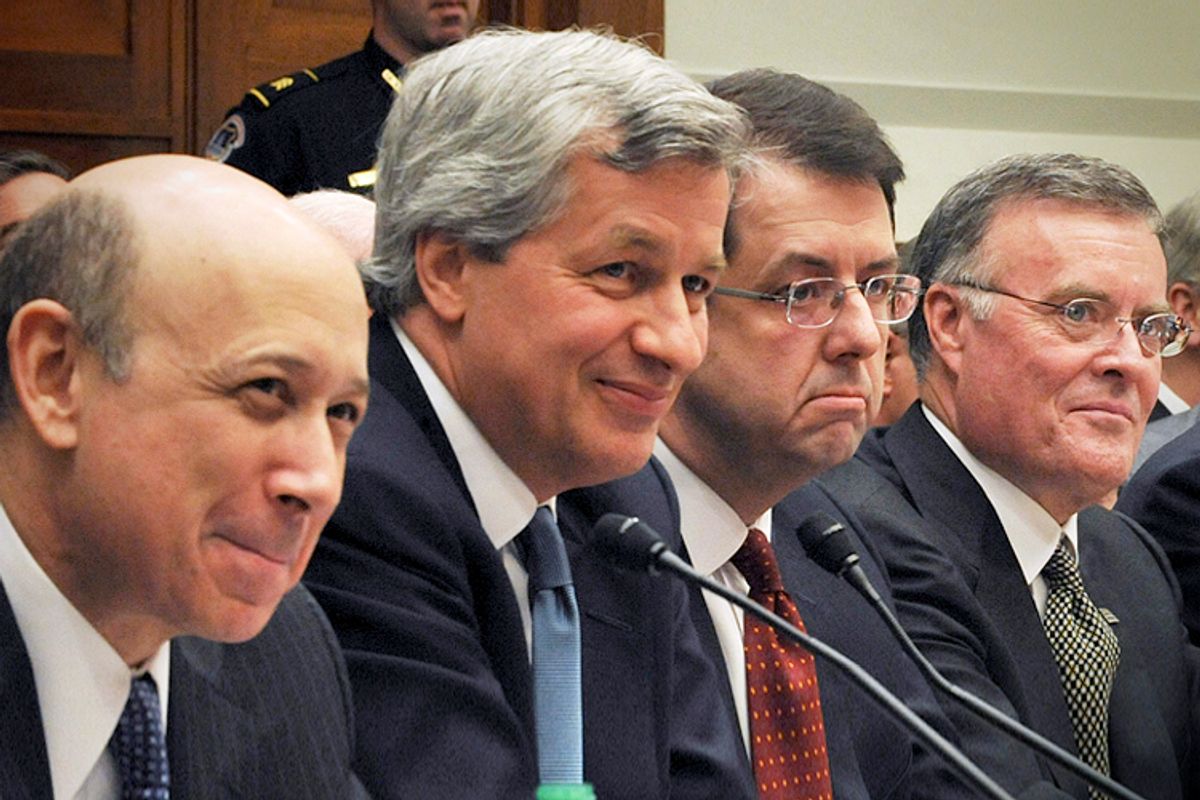 Five years ago, Sunday night was a time of action for the financial world. Top officials desperate to band-aid an oncoming meltdown would use the weekend to find a suitor for distressed firms before the markets opened on Monday. Bear Stearns got sold to JPMorgan Chase on a Sunday night. Washington Mutual and Wachovia and Merrill Lynch sold on a Sunday too. Mortgage giants Fannie Mae and Freddie Mac went into conservatorship over the weekend.

But there was no weekend shotgun wedding for Lehman Brothers, and their ensuing collapse triggered the final stage of a crisis that we’re still feeling today, when you look at 7.3 percent unemployment, the lowest labor force participation rate since 1978, 49 million on food stamps and 1 in 6 mortgage holders owing more on their house than it’s worth. The government spent trillions to bail out Wall Street, but ordinary Americans received only token support. And in this man-made disaster, virtually everyone responsible has gotten away unharmed. In fact, the system that created the financial collapse has been restored more than reformed, and the conditions still exist for another disaster.

The financial crisis featured a group of self-styled innovators who thought they devised perfect financial instruments that would only yield big returns and never any losses (in reality they did devise that, only it’s called “the United States government”). The mathematical analysts, known as “quants,” decided you could take mortgages of any quality, package thousands of them into a bond, and sell it all over the world. The structure of the bond (called a collateralized debt obligation, or CDO), with junior investors taking losses first, and risk spread over thousands of mortgages, promised complete safety, said the quants. Banks even boxed up the riskier lower tranches of the CDO and created new “CDO-squared” products from them, magically making them ultra-safe. The credit rating agencies tasked with quality control believed them, mainly because they were paid to believe them; they derived their income from the very banks who issued the financial products, and had incentives to stamp on a triple-A rating and keep the machines rolling.

In fact, everyone had incentives to ramp up risk and play hot potato with it after the fact. Mortgage originators heard demands from Wall Street for more loans, and handed them out to anyone with a pulse. Investment banks had an incentive to sell the loans to investors, no matter the credit quality. The investors had incentive to buy because they promised higher returns than the low interest rates on government bonds. Banks, hedge funds and investors borrowed more and more to finance these new products and even make bets on top of bets, buying anything that could yield a higher return. This is called “leverage,” and it got out of control before the crisis; banks were borrowing up to $40 for every dollar they held in assets.

What informed people don’t like to say polite conversation is that this enormous risk bubble was based almost entirely on fraud. The originators faked the appraisals to make bigger loans, and fudged the income statements of their borrowers. The banks sold bonds backed by these mortgages to investors without revealing the shoddy quality of the loans. They knew about the shoddy quality – they hired third parties to examine the mortgages – but when they found all the toxic stuff, they used that information to get a discount from the originators, rather than pass on the warnings to investors. When the investments started going bad, investment banks used fraudulent accounting as bad as Bernie Madoff, taking large segments of their toxic assets off the books, pretending risky assets were safe, hiding the truth from shareholders and regulators. This was all not simply unethical; it was illegal, and we know this because petty thieves are indicted and jailed for the same conduct every day of the week. When the Real Housewives of New Jersey forge an application to get a mortgage, the Justice Department arrests them; when every mortgage broker in America does it, they get a pass.

The quants promised this house of cards couldn’t fall apart, because mortgage markets were regional, and that all of them couldn’t possibly fall at once. But that’s what happens with a bubble; it pops. And the extra layers of credit derivatives turned what could have been a somewhat more manageable crisis similar to the housing crash of the 1980s into a massive collapse. Everybody made bets with everybody – a system known as “shadow banking,” invisible to regulators – and then everybody bought insurance on them. And the insurers had no money in reserve; think AIG. Faulty links in this chain of borrowing reverberated through the system; once Lehman went bankrupt, nobody wanted to lend to anyone else because of the risk of default. Because banks relied on short-term lending, this lending freeze meant that even non-financial companies had no funds to make their payrolls.

In summary, the financial industry collectively decided that you could fund economic growth despite stagnant wages through piling on mountains of debt. But when it all went bad, the solution wasn’t to rebalance the economy, to get money into the hands of ordinary workers and preference wages over assets. The solution was to point a fire hose of money at the people who caused the problem, and inflate their assets to preserve the status quo. The Federal Reserve’s emergency lending and then quantitative easing rescued bank balance sheets. The five biggest U.S. banks are now 30 percent bigger than they were at the height of the crisis, nursed back to health by the government. Anyone who tells you TARP worked is looking at a tiny fraction of multi-trillion-dollar government support. And TARP didn’t translate support for the banks into the regular economy. Banks used the TARP program for foreclosure mitigation as a predatory lending system to trap borrowers. Lending for businesses did not increase.

Worst of all, despite a crisis built on fraud, nobody who perpetrated that fraud saw the inside of a jail cell, removing any meaningful deterrent for financial crimes. Most of those criminals walked away with enough money to fund their lavish lifestyles forever. The Justice Department recently had to admit that they inflated their own statistics on financial fraud prosecutions, and they disgracefully tried to re-insert the revised stats into old speeches to cover their tracks. I guess fraud is contagious.

The Dodd-Frank financial reform law and the international Basel III process have made marginal improvements. Banks must maintain a bit more capital to cover their own losses, and there’s a Consumer Financial Protection Bureau now looking out for the victims of predatory behavior. But the structure of the system remains the same. After all, only about 30 percent of the rules from Dodd-Frank have even been written. Some trouble spots during the crisis, like money market funds, have not been touched. And deregulation, both through lobbyist-led weakening of the laws and regulatory forbearance (where those enforcing the laws simply look the other way), is a proximate cause of the crisis. Regulators, many of whom bounce back and forth to work for Wall Street like commuters on a cross-town bus, did nothing to puncture the housing bubble, granted allowances for banks to use massive leverage and lower their capital reserves, ignored the massive flows of money into exotic financial instruments and failed to prosecute criminal activity when presented with it. That lack of will may still exist today.

When – not if – the next crisis hits, we’re likely to see the exact same kind of massive rescue of Wall Street, while Main Street gets left behind. Banks are still too big to fail; they receive massive subsidies in borrowing for just that reason. They still take outsized risks with borrowed money that threaten an interconnected global financial system, with the expectation that government will foot the bill. More and more people in both parties recognize this, and have floated proposals to make banking safer, more boring and more able to pay for its own mistakes. I hope they get around to implementing them before it’s too late.

Postscript: Back in June I wrote about some Bank of America whistleblowers who testified in a court case that they were told to lie to borrowers, and given bonuses to push them into foreclosure. Sadly, that court case was resolved last week when a federal judge dismissed it. Judge Rya Zobel agreed that borrowers faced a “Kafkaesque bureaucracy” when trying to secure loan modifications, but ruled that the multiple claims were too different to be combined into a single class-action lawsuit. A class action was the best option for homeowners pursuing damages on Bank of America, since none of them have the means to sustain a case on their own. But a Supreme Court ruling in 2011 has made it nearly impossible to sue large companies as a group.

The law firms representing the homeowners plan to appeal.