The band talked to Salon about music today, their millennial fans, and why they're "products of rebellion" 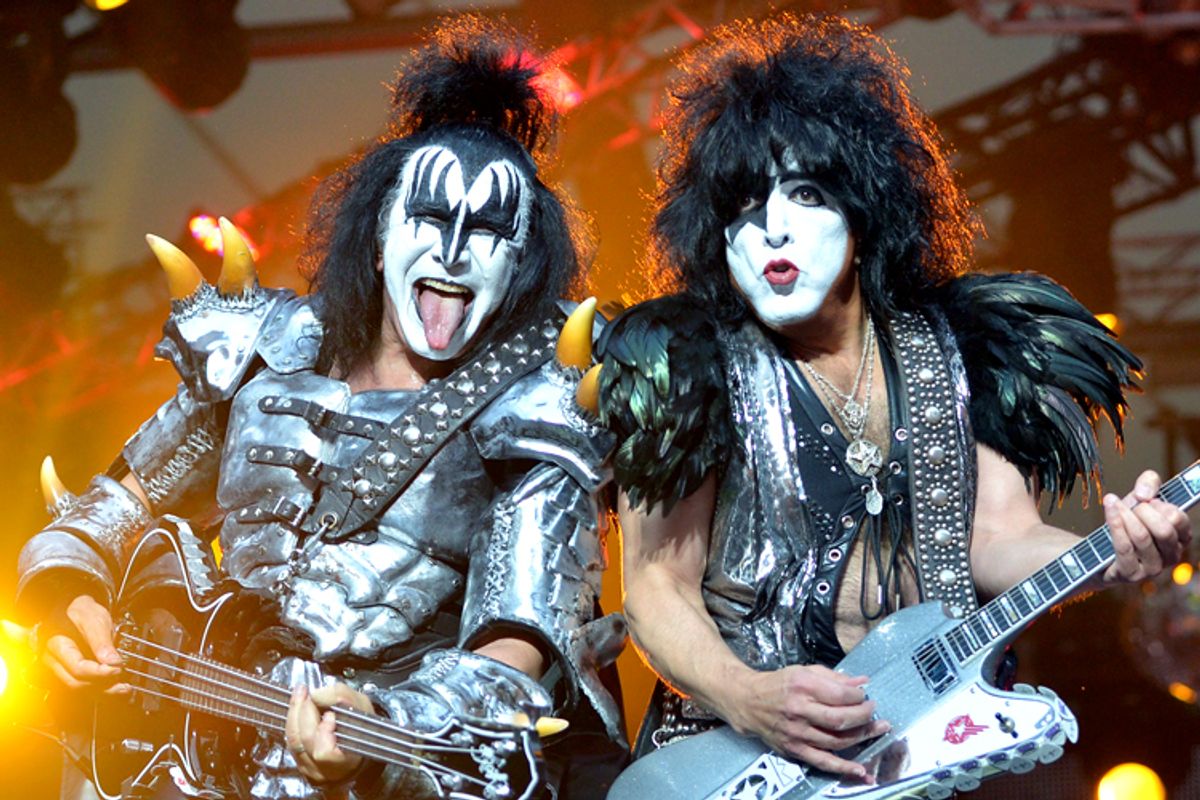 The foursome of makeup-loving heavy metal rockers, whose last album, "Monster," came out last year, have released a book, "Nothin' to Lose," on the occasion of their 40th year. Written by music journalist Ken Sharp with band members Paul Stanley and Gene Simmons, the book chronicles the band's formation and rise to prominence; what it does not contain at any length is a list of critical hosannas and Grammys the band's received. Though their fortunes have evolved over time (the band ultimately received a special "Heroes" award from the recording academy), Kiss has always been the bastard child of the recording industry -- able to sell out arenas and produce hit records on the strength of a sound and a look (black-and-white face paint, tongues fully extended as often as possible), but far from the sort of acclaim that its contemporaries enjoyed.

Not that the band members are troubled. In separate conversations, Stanley and Simmons -- who's carved out a second career for himself as a reality TV personality on shows including "The Celebrity Apprentice" and "Gene Simmons Family Jewels" -- expressed general disregard for the critical establishment and a belief in their continued ability to draw young fans. In particular, Simmons sees some of a new, rebel spirit in Miley Cyrus, the star best known for sticking out her tongue at the current moment. "Self-empowerment," he says. "Fashion be damned, just wear what you want."

Tell me a little bit about what it means to you to "sell out." Kiss -- and Simmons in particular -- has done any number of commercials, reality shows, sports investment projects that don't necessarily fit a rebellious message. Or do they?

Stanley: The premise of Kiss has always been to not live within the confinements and boundaries other people set for themselves. We set our own limitations, and those are no limitations. To be shackled by other bands' and other artists' sense of what they can and usually cannot do -- no, that philosophy has never changed. At this point, we can be involved with taking on an arena football league franchise. The idea is always to branch out with what we've done before. At the heart of it, we remain a rock 'n' roll band. We have no apologies -- people who think we shouldn't are people who can't.

Some might say that bands ought to focus on the music.

Stanley: That's really -- I would have to say that's their own doing. If you don't know why you succeeded in the first place, you're doomed to extinction. We never wanted to be a "Whatever happened to ..." on VH1.

Talk to me a little about nostalgia, and the degree to which that plays into your act. I know you are releasing new records, but ...

Stanley: If you came to a show, you would see the majority of the demographic is in their early 20s. There's something maudlin about being a nostalgia act. Well, I tip my hat to any band that can sell a ticket. But I don't want to see a band that looks like my science teacher in high school. Our audience is young and vibrant; we retain our previous following; we are three generations into it. Unlike other bands that are very demographically specific, who they appeal to and who their fans are, we're the antithesis of that. If you see your younger brother or a parent of yours or a neighbor at most rock concerts, that's not cool but with us and kids, it's a tribal gathering. Whether it's kids or neighbors -- they're all part of a secret society.

You think kids can relate to your style of music?

Stanley: The things we sing about are timeless. Political affairs and social situations come and go. But if you're singing about empowerment and not playing by the rules, you can sing about them until you can't sing anymore. The idea of not listening to people who tell you what you can't accomplish is timeless, while someone else may be singing about saving the whales.

Do you think you're rebellious? You've been able to make a lot of money in the music game while cultivating that image.

Stanley: Rebellion is a state of mind. What I've done with the band is -- we won by not playing the game. The best way to win is by not engaging in the battle. You work around it. We are products of rebellion. It doesn't mean we shouldn't be handsomely rewarded. But we did that our own way.

Stanley: Music critics are, for the most part, bitter people who are intent at dragging people down for being successful at what they want to do, which is probably music. The oddity of being a critic is: You don't get a diploma, you just decide you're a critic. If someone listens to your opinion rather than their own, it's their mistake. Any critic's top 10, any year, it's something controversial or something that will make them look hipper-than-thou. The whole critic game, we've never played.

That's frustrating to them. We outlived them. Most critics have to come to grips and resign themselves to the fact we're 40 years into an incredible worldwide career. And most critics have fallen by the wayside. How can you expect any credibility if someone didn't pay for a ticket. Ask people who paid for a ticket, who worked and paid for a show, ask them if it lived up to expectations.

But you can't deny you have no pretensions to a higher purpose, which other bands aspire toward.

Stanley: We're not hiding anything. And we're adding to what we do. We're a first-rate, kick-ass rock band who can duke it out with anyone out there at the moment. We choose to be more than that. We want to be a spectacle. We want to give people their money's worth. That's not hiding anything. That's embellishing and enhancing. We're dead serious about what we do. Other bands, you'd have to talk about how serious they are. Some might be delusional about how important they are.

Tell me a little bit about the endeavors that have made you take off the makeup. Do you feel it takes away from your allure to appear on reality TV?

Simmons: No, because if the core of it is solid, it doesn't matter what you wear on the outside. We toured without makeup for 15 years, and filled the arenas of America, with or without makeup. We prefer with makeup. At the heart of it, these are songs people like.

I more meant your endeavors offstage.

Simmons: I'm fascinating with or without makeup.

Do you think you're still edgy?

Simmons: Edgy is a relative term. I saw the Stones celebrating 50 or 60 years this year. Past a certain point, when you become iconic, it's beyond edgy. When you don't have history on your side, you aim for edgy. When you are a kid, you just shit on the lawn.

Do you think you're iconic, then?

Simmons: I don't. Millions of people around the world do. They tattoo their bodies with our faces, name kids after our songs. There are conventions celebrating the culture of Kiss, a superliner on the high seas full of Kiss fans.

I asked your bandmate this: What do you make of claims of selling out?

Simmons: We sell out every night.

What do you make of the contemporary music scene?

Simmons: There aren't any! Kinda pathetic! You're answering my question. From 1958 on, you had Motown, rock, events that created legendary stars.

Alternative fans came in, grunge came in -- nothing! Out of metal, only one band, Metallica. The rest? Thank you and goodbye.

Given your yen for extending your tongue, what do you make of the sexualized critique of Miley Cyrus?

Simmons: She's being treated unfairly -- Madonna, Rihanna and the single-named girls with the A's in their names -- uh, Shakira -- if they can do the same stuff, why isn't anyone picking on them? Justice for all. If the rest of the girls can kiss each other, why can't she do what she wants?

Do you think you contributed to that?

Simmons: We should all be free onstage. The old days before the pill, we were all slaves. Self-empowerment -- fashion be damned, just wear what you want.

Do you admire other bands in your peer group, whatever that means to you?

Simmons: Love the Stones, love U2 -- and we'd play together whenever they want.

Why do you think they haven't played with you, then?

Simmons: Why do you think? I love the Stones. But friendship starts at the door, just like boxers. You get in the ring, my job is to knock you out.