Pick of the week: A gorgeous African tapestry in Brooklyn

Pick of the week: "Mother of George" spins out a wistful symphony of food, fabrics and immigrant life 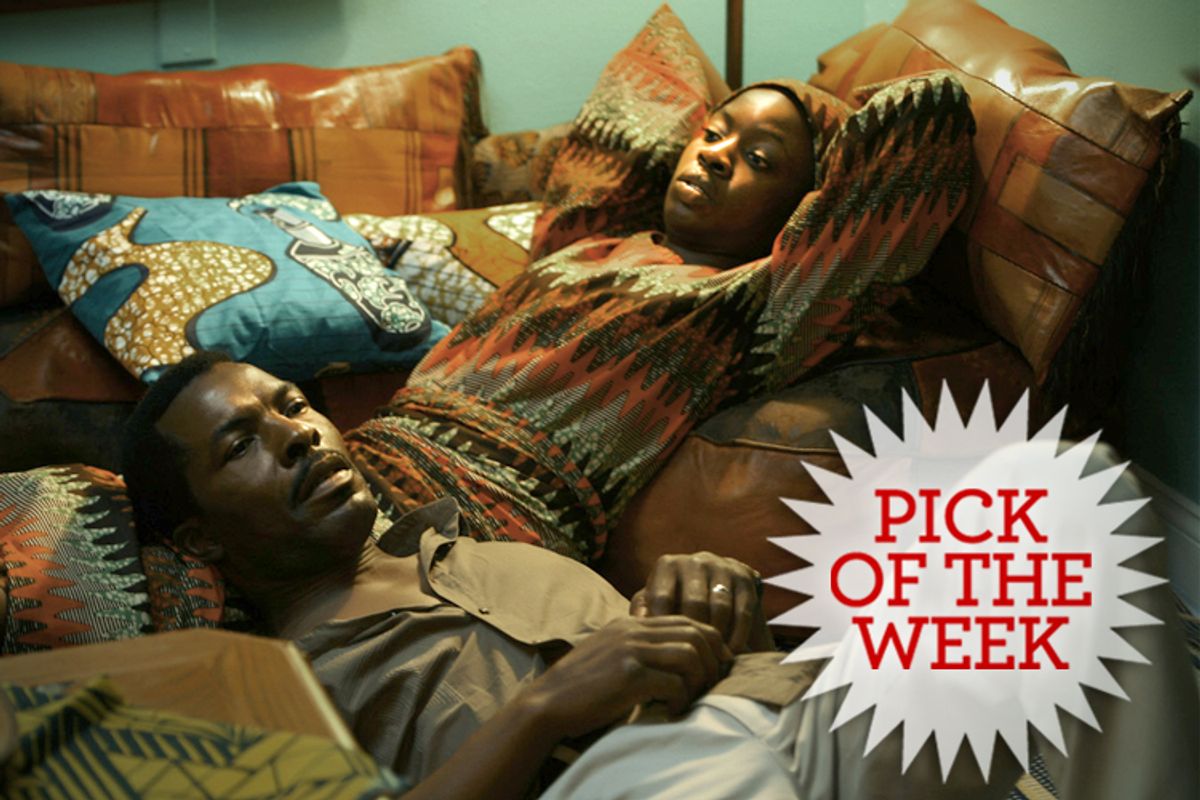 If I describe Andrew Dosunmu’s wistful and spectacular “Mother of George” as a largely realistic drama about the lives of Nigerian immigrants in New York, that’s accurate without remotely being adequate. This is one of the most striking entries in the 2013 global wave of black cinema, but also admittedly one that poses hurdles to audiences with conventional expectations. Those in search of a briskly paced plot or clear-cut social verdicts will do better elsewhere; despite radically different settings, “Mother of George” has some spiritual and visual commonalities with David Lowery’s extraordinary Texas mood piece “Ain’t Them Bodies Saints.” Both movies were shot by cinematographer Bradford Young (“Middle of Nowhere,” “Pariah,” “Entre Nos”), who has rapidly become an essential talent in the American indie-film community. Both are memorable tapestries of sound and vision, set in slightly exaggerated or isolated mythological spaces that don’t quite violate the tenets of naturalism.

“Mother of George” was mostly shot in Brooklyn, and while locals may be able to spot landmarks and Bedford-Stuyvesant street scenes here and there, Young and director Dosunmu keep the focus tightly on the characters and the visual field exceptionally shallow, as if to emphasize that these new arrivals live in a liminal, almost dreamlike zone that is neither the old country nor the new one. In a sense, the story in writer Darci Picoult’s screenplay – about a newly married couple who cannot conceive a child and must choose between Western medical intervention and traditional African practice – is an excuse to keep returning to the movie’s real preoccupations. Those are the ordinary rituals and extraordinary festivals of daily life, from a woman delivering lunch to her husband’s workplace to the lines of undulating dancers wearing gorgeous patterned fabrics at a traditional Yoruba wedding party.

And my God, those fabrics! It may feel like a snotty remark to say that “Mother of George” occasionally feels like a contemplative documentary about the richness of African textiles, but I don’t mean it that way. One way of approaching this film is to understand that the Nigerian-born Dosunmu spent several years working in the fashion industry, as a photographer and a designer for Yves Saint-Laurent. It took me a while to grasp that he’s using the colorful, block-pattern robes and headdresses worn by Adenike (Danai Gurira of “The Walking Dead”) and the other women in her immigrant circle for purposes that go beyond authenticity and atmosphere. These traditional garments are important and beautiful aspects of culture, but also reflect, in subtle ways, the subordinate status of women. When Adenike buys a Western-style dress with a translucent top, under the influence of her Americanized friend Sade (Yaya DaCosta), her husband, Ayodele (Isaach De Bankolé), makes his disapproval clear. He never abuses her, and is always affectionate rather than stern, but the nature of their relationship is clear.

It’s almost frustrating to see De Bankolé, the Ivoirian-born French actor who’s one of the most accomplished screen presences of our time – from multiple roles for Jim Jarmusch to “Casino Royale” to “The Diving Bell and the Butterfly” to playing the president on “24” – in what is essentially a stoical supporting role. Ayodele is a classic immigrant on the road to success, a hardworking, uncomplaining restaurant proprietor. (OK, he complains plenty when it comes to his brother and co-worker, Biyi, played by Anthony Okungbowa.) Ayodele’s implacable certainty that Adenike must bear him a son (to be named George, after his late father) forms the backdrop for Adenike’s lonely struggle, as she faces the reality that after 18 months of carefully marked calendars and drugstore pregnancy tests, it clearly isn’t working. Sade tells her that doctors in New York can do amazing things, at the cost of thousands of dollars their family does not have. But Adenike’s meddlesome mother-in-law – a stereotype that transcends all boundaries of ethnicity and nationality, it appears – as played by the wonderful Bukky Ajayi, has a more direct and entirely low-tech solution in mind. I won’t reveal that here, but if you’ve read anything else about this film, you’ll already know.

Meanwhile, Sade is carrying on a clandestine affair with Biyi, who wants to keep their liaison a secret for reasons that may not be entirely honorable. (You know what they say about American girls.) But the best moments (and best fabrics) belong to Gurira, an American-born actress who was largely raised in Zimbabwe and here gives a performance of enormous passion and dignity as a woman who’s gradually feeling her way toward life in a new society without entirely abandoning the old one. This is an American film, and that’s certainly a quintessentially American story – one that bears a generic resemblance to James Gray’s forthcoming, and wonderful, “The Immigrant” -- but these days it’s totally insufficient to say that.

In part, the Brooklyn background of “Mother of George” remains hazy and indistinct because this is a global story that could just as well be unfolding in London or Paris, Dallas or Denver. It’s a story repeated over and over around the world, about how being uprooted can both set us free and destroy us, and how clinging to tradition can bind us in communities for good and for ill. And you needn’t worry, by the way, that you’ll fall in love with Adenike and her struggle and then have your heart broken. If “Mother of George” in some ways resembles a 21st-century update of the naturalism of Theodore Dreiser and Emile Zola, it’s far more optimistic than those models might suggest, far more committed to the possibility that music, food, fabric and love can sustain these strangers in a strange land.

"Mother of George" is now playing at the Angelika Film Center in New York. It opens Sept. 20 in Atlanta and Los Angeles; Sept. 27 in Chicago, Nashville and Seattle; Oct. 4 in Boston and Portland, Ore.; Oct. 18 in Washington; Nov. 8 in Denver; and Nov. 22 in Philadelphia, with more cities and dates to be announced.