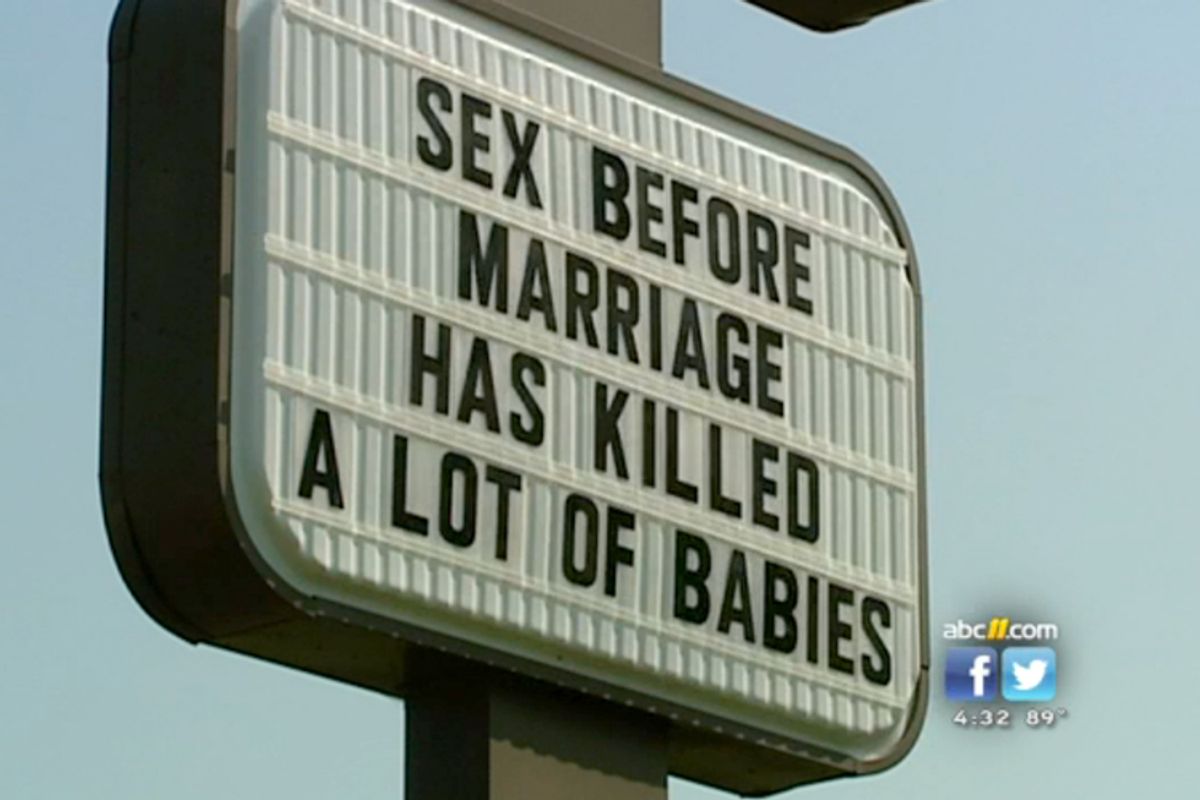 North Carolina mom Jackie Wenzel is offended by a sign she saw recently outside a Raleigh church. She's disturbed that it's being viewed by children. As she was driving past Triangle’s Worshipping Church recently, she saw the words, "Sex before marriage has killed a lot of babies." So she called upon the local media to draw attention to the outrage. Not the sentiment, by the way, but the fact that her three young daughters had to see it -- and she had to explain it to them.

As WTVD reports, "The mother says she doesn't have a complaint with the message itself, her problem is the wording that forced her to have a conversation with her young girls she wasn't prepared to have." In Wenzel's words, "On a public street, there was no censorship there for me to be able to protect my children, and to avoid a certain situation where we were not ready to have that conversation." That's right – on a public street, there was no censorship to protect Jackie Wenzel's children. Can we get an ordinance about that?

It's nice to know Wenzel seems cool with overall thrust of the sign, just not the wording of it. And the church's pastor, Charles Young, has promised to come back with a differently expressed version of it. Off camera, he told WTVD that "He's hoping women who see the sign will get the message that the doors of the church are always open as an alternative to come for counseling as opposed to an abortion." Several commenters on the station's Facebook page have likewise declared their support for the sentiment, saying, "Better than seeing 'abortion is ok' signs. Get over it." I counted 11 instances of "The truth hurts" and three references to "freedom" (including "freedom of speach") before I had to put my head down on my desk and bang it gently there a while.

It's true that the majority of women have abortions are unmarried. But here's a fun scientific fact: Premarital sex doesn't cause pregnancy. Limited access to contraception, on the other hand, does. You want to curtail all those unwanted pregnancies, and the abortions they might lead to? In New York, the teen pregnancy rate plummeted 27 percent over the past decade, thanks largely to better access to birth control. Conversely, there's an interesting correlation between an aggressively celibate agenda and baby making. Mississippi, with an abstinence-only "sex education" curriculum, has the highest teen pregnancy rate in the country. Furthermore, the majority of women who have abortions are or have at one time been married or cohabited, and 61 percent of the women who have abortions already have children. Then again, maybe the church meant the sign literally, and there's some epidemic of people having premarital sex and blowing up orphanages we haven't heard about.

But whether you agree with the sign or not (and if you do, I truly grieve for your ignorance), the idea that children should be protected from controversial or difficult ideas is both dangerous and ludicrous. You can filter all you want – and responsible parents do -- but that doesn't give you the right to get huffy when something you're not "prepared" for appears in your path and you're "forced" to explain it to your children. Children don't exist in a bubble. If they see something that raises questions for them, that's not a cause to call in the media; it's an opportunity to have a dialogue. Having kids means being "forced" into awkward conversations all the time – about sex, about politics, about faith. And talking with your children is just as much your job as protecting them is. Speaking on marriage equality, Louis C.K. once perfectly assessed what he called "That argument of the soccer moms -- 'How am I going to explain that to my kid? I don't like explaining things to my kids. I don't like talking to them, so you should stop your whole lifestyle so I don't have to talk to my kid.'" It's a dumb reason to demand "censorship." As C.K. puts it, "Why is that anyone else's problem?"