Congress is only 18.3% women -- and that's just one of the many ways sexism is alive and well 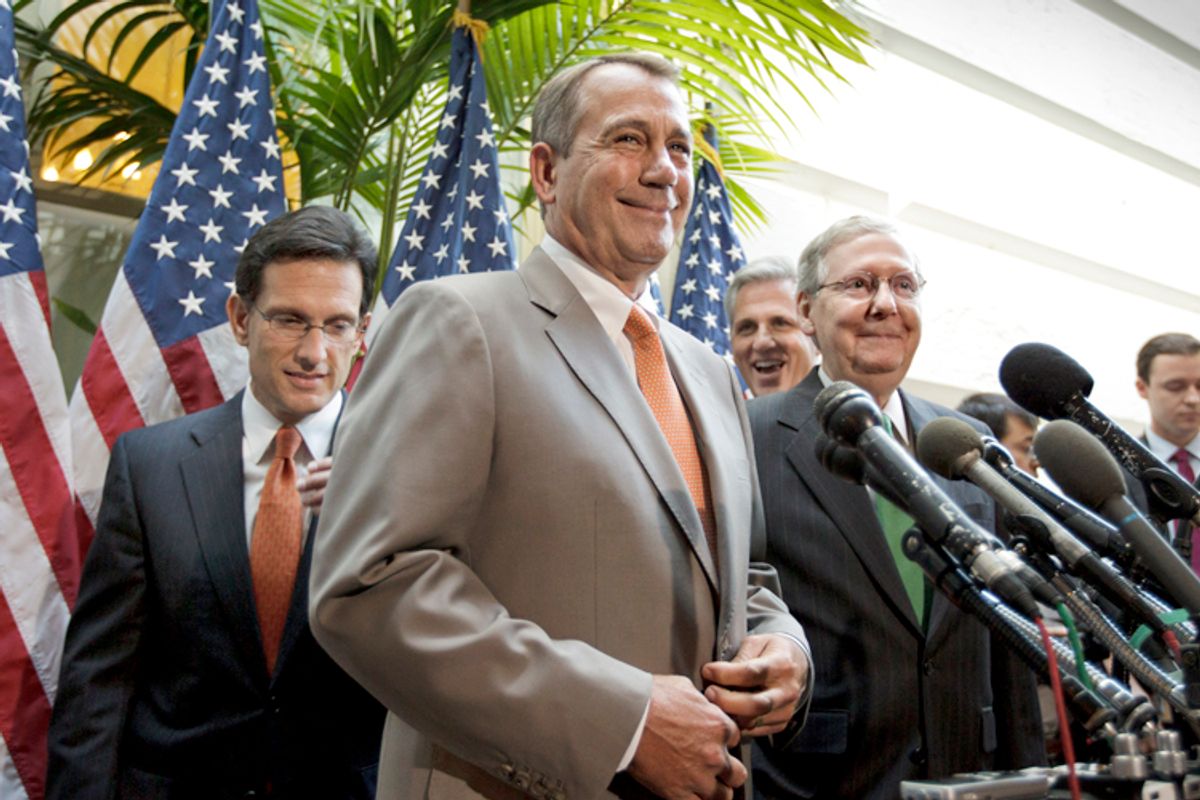 In "The End of Men," Hanna Rosin chronicles some of the ways in which the tide seems to be turning for women. We can vote now, after all, and we should never lose sight of that. I jest. "The End of Men" is not nearly as provocative as the title suggests but the book is well written. The “Pharm Girls” chapter is particularly interesting, highlighting the ways in which women have gained unprecedented ground as pharmacists. Rosin has plenty of statistical evidence supporting her various claims -- but as William James said, “We must be careful not to confuse data with the abstractions we use to analyze them.”

The biggest flaw in Rosin’s argument is the notion that women’s rise toward equality must somehow correlate with the fall of men or that such a state of affairs would even be desirable. Feminism is not interested in the downfall or suffering of men, no matter how willfully people choose to interpret feminism and its ambitions as such.

The paperback of "End of Men" is newly released and Rosin offers a new epilogue. A great deal of the piece antagonizes the feminists she imagines gleefully reveling in the suffering of all us downtrodden women. Rosin implores feminists to accept that the patriarchy is dead, which is so patently absurd that the hashtag #RIPPatriarchy quickly flourished on Twitter.  She’s trying to pick a pointless fight with an audience that simply isn’t paying her any mind.

Rosin is not wrong that life has improved in measurable ways for women but she is wrong in suggesting that better is good enough. Better is not good enough, and it’s a shame that anyone would be willing to settle for so little. I cannot think of clearer evidence of how alive and well the patriarchy remains.

It’s a shame, really, because the epilogue and its tone do such a disservice to a book that's reasonably good, even if its overall premise is flawed. There’s also blatantly incorrect information like the suggestion that women comprise a third of Congress. Women represent 18.3% of the 535 seats in the 113th Congress.

We don’t need to get petty though. The patriarchy, if that’s what we’re calling it today, is alive and well. The tech industry is consistently embroiled in one misogyny-related controversy or another. At TechCrunch’s Disrupt, two programmers shared the TitStare app, which is exactly what you think it is. Something so puerile is hardly worth anyone’s time or energy but it’s one more example of the cultural stupidity that is fueled by misogyny. Harvard recently introduced Riptide, a project that will examine how the journalism industry collapsed under the pressure of digital advances. Unfortunately, most of the people interviewed for the project are white men, offering, as usual, a narrow perspective on an issue that would benefit from a more diverse set of voices. Fix the Family, a conservative, Catholic family values organization, offers a list of reasons why families should not send their daughters to college. The list is not satirical. I could go on but you can simply read the news, on any given day, for yourself.

These are relatively small things, though -- symptoms, not the disease. These situations are irritants that pale in comparison to the more significant issues women face both in the United States and around the world. We could talk about the restriction of reproductive freedom in North Carolina and Texas and Ohio or we could marshal statistics on domestic and sexual violence or women living in poverty. If the patriarchy is dead, the numbers have not gotten the memo.

Rosin suggests that feminists are holding onto a grudge, that feminists are willfully clinging to this notion of patriarchal dominance as if we would be unable to function if we weren’t suffering. I’m only one feminist but I’m confident we’d be just fine if all were right with the world. She writes, “The closer women get to real power, the more they cling to the idea that they are powerless. To rejoice about feminist victories these days counts as betrayal.”  The flaw here is the same as the flaw in "The End of Men"—an all or nothing outlook, and an unwillingness to consider nuance. Some women being empowered does not prove the patriarchy is dead. It proves that some of us are lucky.

It is far more important to discuss power than to exhaustively regurgitate the harmful cultural effects of power structures where women are consistently marginalized. We already know the effects. We live them and try to overcome them. But let’s talk about power. There are bright shining stars like Marissa Meyer and the other twenty women who are CEOs of the Fortune 500—a whopping four percent. In the updated epilogue, Rosin blithely references this number as if to say, “Leave me within my delusion. I am busy.” We can also talk about how no woman has ever been president of the United States and how there are only nineteen female presidents and prime ministers throughout the entire world.

In some ways, Rosin’s is a clever rhetorical move. No matter how you respond, she places you in the position of seeming like you do, in fact, have a grudge, that you are holding onto anger and unwilling to see the truth as she frames it. Disagreement, however, is not anger. Pointing out the many ways in which misogyny persists and harms women is not anger. Nor does disagreement mean we are blind to the ways in which progress has been made. Feminists are celebrating our victories and acknowledging our privilege when we have it. We’re simply refusing to settle. We’re refusing to forget how much work there is yet to be done. We’re refusing to relish the comforts we have at the expense of the women who are seeking comfort still.