Home-schooling: You're doing it too!

The home-school trend is just an extension of what "regular" parents are already doing. Can't we all get along? 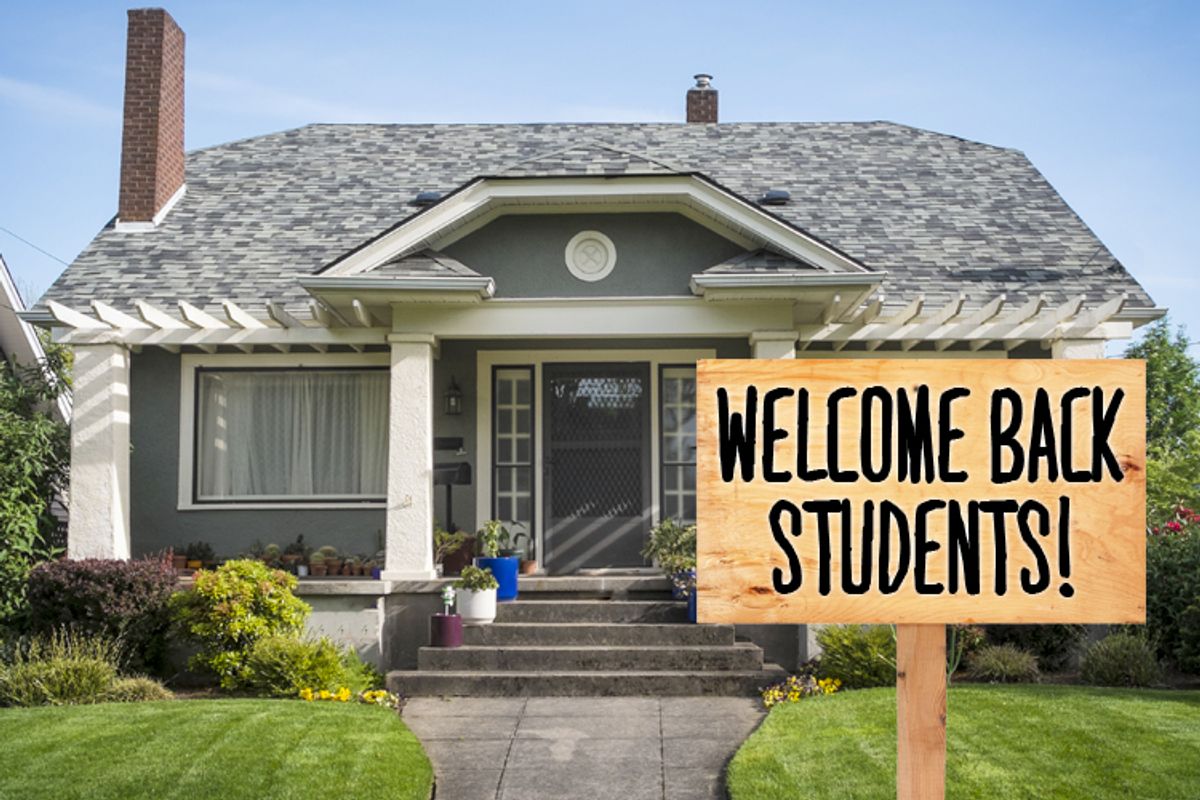 Before the torrential thunderstorms moved into New York City on Thursday afternoon this week, several hundred kids and their parents got together for a picnic and enormous free-form play-date on the Great Hill, an open hilltop meadow near the northwestern corner of Central Park. The children ranged in age from toddlers up to teenagers and, yeah, it was a school day. That was pretty much the point. The event was the annual Not Back to School Picnic hosted by the New York City Home Educators Alliance, the largest of several Gotham home-schooling organizations.

There are something like 3,000 registered home-schoolers in New York City, my two fourth-grade children among them. (That's probably a slight undercount that doesn't capture people who don't register, but in any case it's a small number.) At least on the surface, the NYCHEA picnic is a pretty good example of how different their daily routines can be from those of the 1.1 million or so kids who attend New York’s public schools. There’s a truism about home-schooling in an urban context that holds somewhat true, which is that the term is a misnomer: It mostly doesn’t happen at home and mostly doesn’t look like school.

But I’m not here to argue for the moral or educational benefits of home-schooling, which doesn’t fit most people’s lives and certainly isn’t the answer to our educational dilemma on any large scale. I’m arguing that home-schooling is a leading indicator that symbolizes deep-seated changes in society and in the construction of parenting, and also that the alleged philosophical gulf between home-schoolers and public-school parents – always a reliable source of flame wars! -- is largely an illusion.

For one thing, a great many parents these days, of all backgrounds and income levels, are putting a home-school level of labor into their children’s education, and just not calling it that. They're not quite home-schooling, but they're almost home-schooling -- or they're even home-schooling on top of regular school. Of course there are many working-class parents who are too busy getting through the day and putting food on the table to worry about Mandarin lessons or whatever. But a whole lot of middle-class public-school parents these days are fighting really hard to make sure their kids can get a decent education: They’re battling funding cuts and teaching-to-test mandates, debating dress codes and the ever-lengthening school year, fighting to save the library or the art teacher, hiring outside tutors or paying through the nose for after-school “enrichment” programs.

Parents of schoolchildren also spend a whole lot of time before and after school hours doing exactly the same things home-school parents do: Reading aloud to them or badgering them to practice that damnable clarinet or doing what home-schoolers call “strewing,” which just means nudging books about Shakespeare or C++ or the civil-rights movement in their direction and hoping some of it sticks. Yes, school parents also get a six- to eight-hour break in the middle of the day that allows them to work an income-producing job, which my wife and other home-school parents don’t. But aside from that I suspect the amount of parental effort applied to education, largely in response to the failures or limitations of the public schools, is pretty similar. (Maybe the parents of private-school kids still get to drink martinis, sleep with one another’s spouses, and not listen when they ask their children how the day went. I wouldn’t know.)

There are several other levels on which the apparent rise of home-schooling – which is rapidly becoming more diverse and less keyed to white Christian conservatives – reflects underlying cultural shifts. We live in the era of the DIY revolution, an age of constant innovation and decentralization. You can audit courses at Stanford and MIT through your computer screen from Saudi Arabia or South Dakota, and every middle-size city features its own locally brewed beer and locally distilled whiskey. It’s the era of Maker Faire and Kio Stark’s “Don’t Go Back to School” and Matthew B. Crawford’s “Shop Class as Soulcraft.” Scientific innovations are being crafted on 3-D printers by people without advanced degrees; it’s no longer adequate or accurate to describe those things as provinces of dilettantism or privilege. The technological revolutions of the last 40 years have made the means of production available to all, for better and for worse. Is it any wonder that more and more people – both home-schoolers and school parents -- want more control over their children’s education?

Of course it’s true that public education faces the daunting and socially urgent task of offering hope and possibility to kids who grow up in poverty, in dysfunctional households, in neglected or abandoned neighborhoods and towns. It may also be true that poor people are less impacted by DIY culture, and have less access to the relevant technologies, but it’s less true than it used to be. In any case, it does not follow that poor people will benefit most from a bureaucratic, one-size-fits-all educational model. Urban charter schools have a highly mixed record overall, but successful ones like the Harlem Success Academy are oversubscribed as soon as they open. As I wrote three years ago, there’s absolutely no evidence that the business-school models of standardized testing and uniform drill-based education endorsed (in slightly different forms) by the Bush and Obama administrations will achieve the desired results, and considerable evidence that they may be counterproductive.

Advocates of home-schooling often bring up the argument that the classic model of the large public school, with its defined class periods and tardy bells, was a product of the Industrial Revolution designed to mimic the Henry Ford-era factory and prepare students for a routinized and regimented work life. In an age when most people will work many different jobs in different places, or work from home, school itself should arguably be a more fluid and decentered experience. Home-schooling is just one of many possible options in that transition, but it can be helpful to some families in an entirely pragmatic way. When one or both parents work part-time, home-schooling becomes a realistic option for kids past primary school. In that case, it's less home-schooling than “part-time school”: This semester our kids are taking organized group classes outside the home in theater, computer animation, filmmaking, woodworking and other things I’m probably forgetting. And theirs is a light schedule; we know some families whose kids are busier than typical schoolchildren.

In other words, the home-schooling boom – which in real terms remains pretty small – is an index of how much the dominant model of parenting has changed since the 1970s, when my parents managed to bestir themselves for parent-teacher conferences twice a year and that was about it. But it’s by no means the only index, or a uniquely important one. It’s a more extreme example – harder in some ways, and easier in others – of what a large percentage of parents are already doing.

Another reason why I say that the gulf between home-schoolers and school parents is imaginary is that the home-school population is rapidly becoming more diverse. It encompasses rural libertarians and hippies, middle-class African-Americans and Latinos, along with the traditional white Christians and recently enlisted metropolitan hipsters. Most of the stereotypes people have about home-schoolers – dysfunctional zealots in homemade frocks or wild-haired heathen children on the other – never had anything to do with our lived experience. Nobody really knows how many home-schoolers there are in the United States (probably somewhere between 1.5 million and 2 million), or what percentage are old-school evangelical Christians. But whatever the true numbers may be, I guarantee that they’re changing fast and don’t capture the complicated reality.

In New York and other major metropolitan areas, the home-schooling boom is overwhelmingly secular and middle-income. That said, one can find small but thriving urban communities of African-American home-schoolers (often but not always religious), whose issues with public education have little to do with evolution or abortion. There are almost certainly more Muslims and Catholics among big city home-schoolers than there are white Protestants. And even the scary label “Christian home-schooler” doesn’t tell you anything. We've met several home-schooling families who are clearly people of faith but never bring it up or rail against evolution or Obamacare or whatever.

Again, my point is not that home-schoolers are amazingly cool but that they’re all different from each other and not all that different from everybody else. As an educational mode and a way of life, home-schooling doesn’t work for most two-earner families, and is almost inconceivable for most one-parent households. (I know of exceptions to those rules, although I honestly don’t understand how they manage it.) The personal and financial sacrifices required of parents who home-school are considerable, and the benefits are highly variable. (They do, however, include the possibility of taking cheap beach vacations right after Labor Day, as we have done the last three years.)

Our own family’s decision is highly contingent, and subject to change at almost any moment. I think it’s entirely likely my kids will want to attend one of New York’s excellent specialized high schools (which admit a few previously home-schooled students every year), and even more likely that my wife will want to return to a paying job far away from children by the time we reach that point. (Look for a new wave of stories about part-time home-schoolers who dip in and out of public school.) Like most home-schooling parents, on bad days we have definitely threatened to enroll our children immediately in the most heinous and depressing public school we can find. Sadly, the cane and the rod so favored by schoolmasters in, say, Tom Sawyer’s day seem to have fallen out of fashion.

Both my wife and I attended public schools all the way from kindergarten through high school. We are acutely aware that certain aspects of the school experience are valuable, and that our kids are missing out on those things for now. I can respect the fact that people who feel passionate about public schools see our decision as a political betrayal, or even an abrogation of our shared moral responsibility to make the educational system better for everybody. Personally, I don’t see any contradiction in believing that public education is essential to society and also believing that those who opt out of it for various reasons are playing a role in the conversation about how to fix it.

As for the perceived conflict between home-schoolers and public-school parents, that has often been made worse by overheated dogma: The public schools are industrial factories of conformity and despair! Home-schoolers are maladjusted freaks in high-waisted Wrangler jeans! In the real world, both groups are empowering themselves and creating new possibilities amid a climate of bureaucratic failure, institutional crisis and rapid change, and their long-term interests are the same. Are any of us getting it exactly right? I definitely can’t promise that. We all get one chance at doing the best we can for our kids, and we all make mistakes. It’ll be their turn soon.