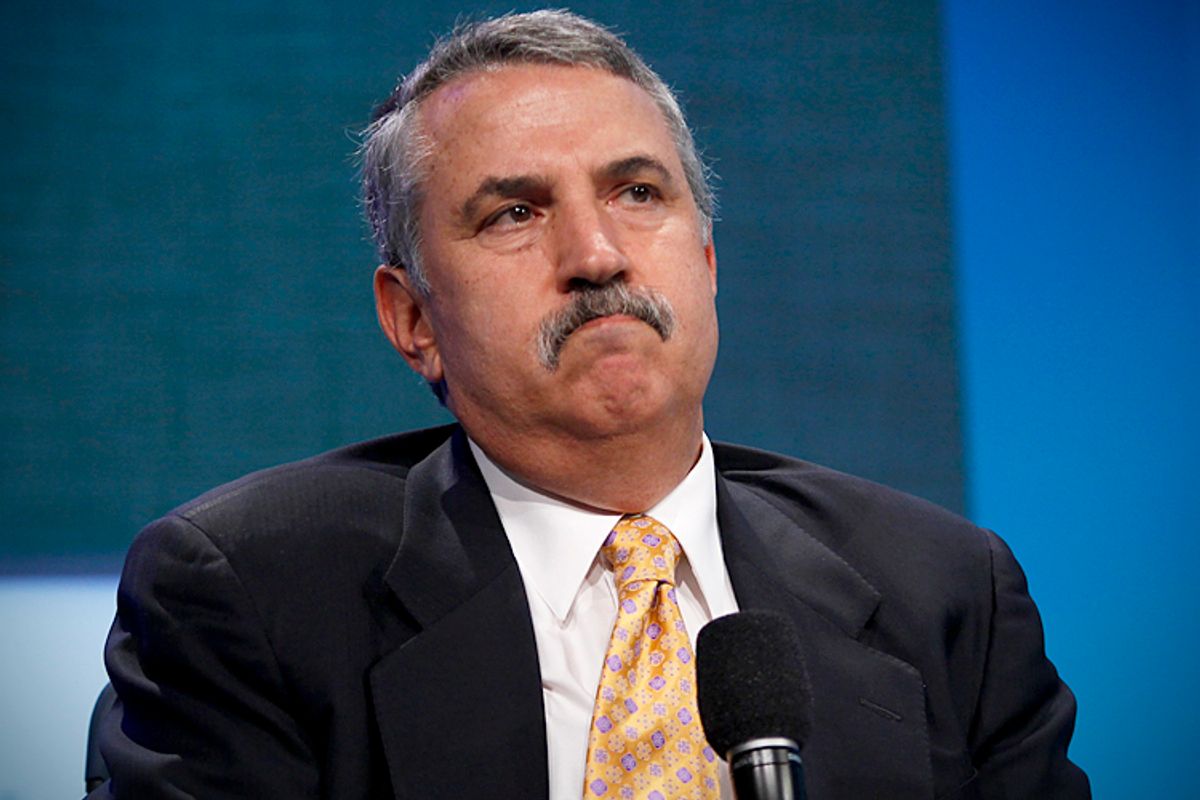 This article originally appeared on Jacobin

Back in February 2011, New Republic offered a summary of a Thomas Friedman column “edited down to nothing but mixed metaphors and clichés.” It begins:

A wake-up call’s mother is unfolding.  At the other end is a bell, which is telling us we have built a house at the foot of a volcano. The volcano is spewing lava, which says move your house.

Iraq is Libya is Afghanistan is Bosnia is Syria. You can’t go from a vertical Saddam to a horizontal Jefferson without falling into Hobbes or Khomeini. What we need is an army of the center to take root and protect everyone from everyone in the uphill fight. The problem is poison gas and poisoned hearts. The US should ‘arm and shame’ in Syria but the Muslims have been fighting since the 7th century and you want to tell me that our credibility is on the line? Really? Really? I don’t think so. This is not South Africa.

Friedman begins his missive with the question: “Say, did you see the news from Libya — the last country we bombed because its leader crossed a red line or was about to?” He quotes from a recent article in the British Independent:

Libya has plunged unnoticed into its worst political and economic crisis since the defeat of Qaddafi two years ago. Government authority is disintegrating in all parts of the country putting in doubt claims by American, British and French politicians that NATO’s military action in Libya in 2011 was an outstanding example of a successful foreign military intervention, which should be repeated in Syria.

Friedman proceeds to announce that Iraq, Libya, Afghanistan, Bosnia, and Syria are “all the same war” but refrains from suggesting that the sameness might have anything to do with the pernicious effects of foreign military intervention.

Instead, he goes on about the difficulty in multisectarian societies of transitioning from vertical rule by dictators to horizontal Jeffersonian rule and determines that, in Libya, “Hobbes took hold before Jefferson” because the US was “without boots on the ground to referee, and act as the army of the center.”

A role played by the US military in Bosnia, Iraq, and Afghanistan, the “army of the center” has apparently replaced the “well-armed external midwife” that was previously deemed necessary to guide societies in transition. As Glenn Greenwald has pointed out, said midwife was simultaneously described by Friedman as the reason Iraq got “stuck in Hobbes” and the only way other countries could avoid ending up in the same situation.

After learning that, “[i]n short, the problem now across the Arab East is not just poison gas, but poisoned hearts,” we arrive at the climax of the article, in which Friedman reiterates his “arm and shame” strategy for Syria—arm the rebels and shame the regime—while his panties are swept into a bunch:

But, please do spare me the lecture that America’s credibility is at stake here. Really? Sunnis and Shiites have been fighting since the 7th century over who is the rightful heir to the Prophet Muhammad’s spiritual and political leadership, and our credibility is on the line? Really? Their civilization has missed every big modern global trend — the religious Reformation, democratization, feminism and entrepreneurial and innovative capitalism — and our credibility is on the line? I don’t think so.

By accident, he then pens what could be mistaken for genuine self-reflection: “We’ve struggled for a long time, and still are, learning to tolerate ‘the other.’”

Highlights of Friedman’s own learning trajectory have of course included his May 2003 appearance on Charlie Rose’s television show, when he explained why Iraqis needed to pay for the “terrorism bubble” that had produced 9/11:

We needed to go over there, basically, um, and … take out a very big stick, um, right in the heart of, of that world … What they needed to see was American boys and girls going house to house from Basra to Baghdad, um, and basically saying: ‘Which part of this sentence don’t you understand? You don’t think, you know, we care about our open society; you think this bubble fantasy, we’re just gonna let it grow? Well. Suck. On. This.’

Never mind that Iraq had nothing to do with 9/11 or that influential New York Times columnists shouldn’t instruct entire nations to suck on things. Because Iraqis insist on living in the 7th century, they are fundamentally to blame for Western civilizing destruction.

Friedman’s focus on the inherent defectiveness of Arab/Muslim civilization means that he is able to excise relevant bits of historical context that nonetheless do pop up on occasion in his articles—as might be expected of someone who is both exceedingly prolific and cannot keep track of his own thoughts. In his 2011 piece on volcano wake-up calls, for example, he acknowledges:

It was that attitude that enabled the Arab world to be insulated from history for the last 50 years — to be ruled for decades by the same kings and dictators.

Needless to say, this fails to jibe with Friedman’s haughty pronouncement in 2005: “It is not an exaggeration to say that, if you throw in the Oslo peace process, U.S. foreign policy for the last 15 years has been dominated by an effort to save Muslims—not from tsunamis, but from tyrannies, mostly their own theocratic or autocratic regimes.”

Friedman ends his latest dispatch with the question: “What is the difference between the Arab awakening in 2011 and South Africa’s transition to democracy in the 1990s?” While the most obvious difference is that, unlike the Arab awakening, South African democracy was not inspired by Google Earth, Israel, and the Beijing Olympics, he opts for a more banal answer: “The quality of local leadership and the degree of tolerance.”

As for what happens next in the Iraq-Libya-Afghanistan-Bosnia-Syria War, imperial meddling will no doubt continue to be facilitated by pompous ejaculations from Orientalist pseudo-pundits.