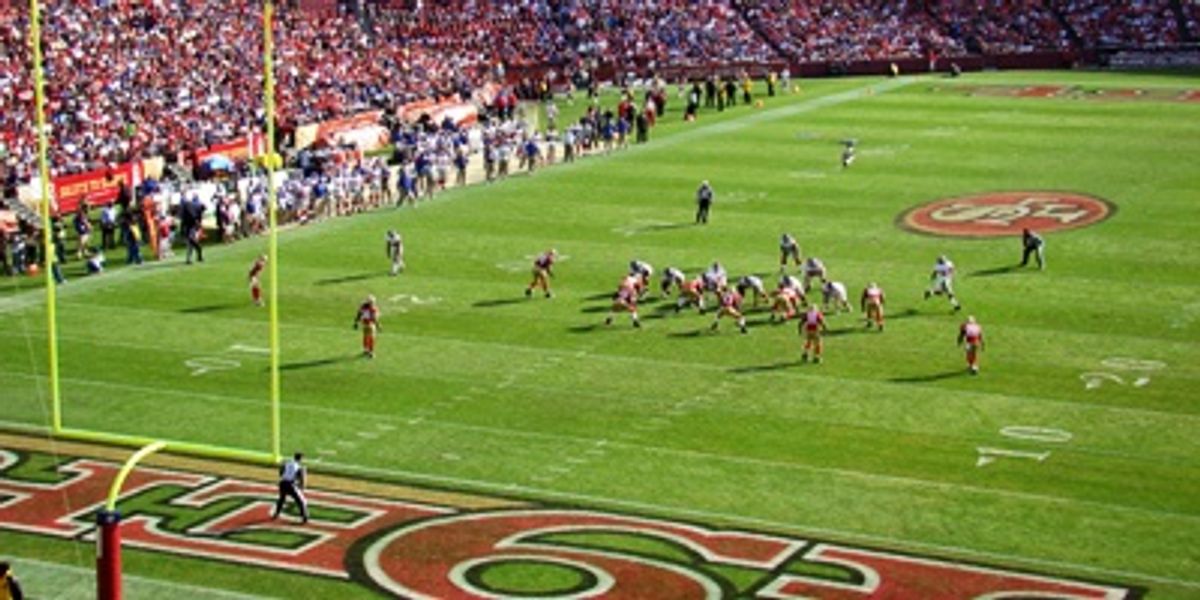 This originally appeared on The Classical

Chris Simms did the second-worst thing possible. He floated a lazy, five-yard dump-off pass over the middle to halfback Michael Pittman. This put Pittman in a thankless position, but he did his duty and caught the ball. This simple act changed Pittman from Person to Human Detonation Target for one of the most ferocious linebackers in human history. Per the rules, Ray Lewis was legally permitted to propel his 240 pounds of biological concrete into Pittman once Pittman put his hands on the ball. And so Chris Simms did what Chris Simms and other subpar quarterbacks often do: he made a human alley-oop out of his receiver.

Ray Lewis—being the man who was once featured in an Under Armour commercial doing tricep pull-downs with a fire escape—did what was expected of him. The nicest way to describe this is that Lewis transferred his kinetic energy to Michael Pittman. Pittman, as physics would predict, crumpled to the ground like well-aged bleu cheese.

Had that hit occurred this season, well, that would be really curious because none of the aforementioned players are still in the NFL; it would be really unfortunate for Mr. Pittman to have Ray Lewis randomly destroy him again while walking his dog or something.

But, were a similar hit to happen in a game this season, things would go differently. Referees would make it rain with penalty flags like extras tossing currency in a Juicy J video; announcers would do some finger-wagging and semi-disingenuous shaming while network executives nodded along; a columnist or two would assuredly ink words about how there’s “no place in the modern game” for such a hit, what with all we know about what bad, scary things football does to brains; another columnist would rebut that columnist by pointing out that it’s A Man’s Game In The National Football League.

You know all this. But this wasn’t the case in 2006, when Ray Lewis put his Pumper Truck Arm into Michael Pittman’s throat. Back then, ESPN’s Tom Jackson did the worst thing related to this play in reaction to Simms’s second-worst thing: he celebrated the hit, loudly and with an unseemly jolliness, on camera. This is because, back then, in the NFL’s not-so-distant past, there was Jacked Up.

You may remember Jacked Up, a segment that aired on ESPN before Monday Night Football every week, narrated by Tom “Say Hello” Jackson (not an official nickname), in which the crew recaps the biggest hits from the previous day’s NFL action. Lewis’ attempted decapitation of Pittman was the Number One Hit of the Day. As the video replays the hit over and over, changing angles and lenses and adding dramatic rumble cams in case you couldn’t tell the hit was Hard-with-a-capital-H, you can hear Michael Irvin in the background shouting “Ohhhhhh!” almost assuredly holding one hand to his mouth and the other arm outstretched in that hold-me-back-but-really-no-need-to-hold-me-back-I’m-not-going-anywhere-because-I’m-seated gesture that Grown Ass Men often and inexplicably do.

And then the Jacked Up liturgy. When Tom Jackson completed his Tough Man Homily, he says, “You just got…” and leaves it hanging for Irvin, Jackson, and now-vocal post-concussion syndrome sufferer Steve Young to somewhat-enthusiastically shout, in unison, “Jacked Up!” They did this after every hit.

It’s maybe not quite right to say it didn’t feel wrong then—nobody told us it ought to, but there is something invariably jarring about seeing men roll around helplessly on the field and stare blankly into the distance as if their brains had abruptly floated away. It feels plenty wrong now, seven years and a great deal of new, dark certainty later.

While the violence of football was never much of a secret, or anywhere but the foreground, the conversation surrounding football’s neurological trauma problem was a very different one in 2006 than it is today. So we might as well take this into account when addressing the ways in which Jacked Up remains an insensitive embarrassment.  But let’s be fair. Let’s take concussions out of the discussion, where they mostly were in 2006.

It doesn’t help much, honestly. In Jacked Up segments, athletes weren’t treated much like humans, at least in the sense that anyone involved appeared to wish that they avoid severe agony, which seems like a pretty basic do-unto-others standard. Take this graphic, for example:

That is Oakland wide receiver Alvis Whitted. The ESPN graphics department placed a crosshair over his neck and torso—this even though the hit has already been replayed several times, so it’s not like viewers are unaware of what’s about to happen, or where—just to remind you that Alvis Whitted is not so much a person who is about to be in a lot of pain, but a target. Dawan Landry, the Ravens safety, becomes a hitman, ready to take out his mark.

In the violent collision that follows, Whitted’s helmet comes flying off, at which point Tom Jackson starts repeating over and over, “Keep your helmet on. Keep your helmet on.” It’s difficult for me to objectively analyze Jackson’s reaction, given our present-day awareness of the harms of violence in football, but I would at least posit Dawan Landry is more responsible for Alvis Whitted’s helmet being separated from Whitted’s body than Alvis Whitted.

There he is, dead to rights, some hapless n00b in Call of Duty. This is Football, Because Football Is War Without Guns. Tom Jackson says of McGraw, “Boy does he get wiped out so quick, you can’t see him but you know he got…” and, sure as Wayne Chrebet’s Post-Concussion Syndrome,  the rest of the crew echoes, “JACKED UP!” Amen and amen.

Speaking of getting wiped out, you can barely even see Antonio Bryant as he gets engulfed in this hit. Here’s a picture of what Tom Jackson joyously refers to as a “knockout shot”:

Jackson was factually correct, because due to an opposing player’s forearm meeting his head and neck while he was crouched to protect a football he had just caught, Antonio Bryant lay motionless for the remainder of the clip.

Michael Pittman, it should be said, got up. Two weeks later, the man who threw that hapless pass to him, Chris Simms, would get hit so hard that his spleen would quite literally rupture. Another 45 minutes, Simms later said, and he might have died from internal bleeding. 2006 was so long ago, and so many things were different, that Drew Magary was still writing for Kissing Suzy Kolber, where he made the following funnies about the Simms injury:

“I was going to make a gay joke here about Simms swapping bodily fluids with another man [because he had to receive blood transfusions], until I considered the fact that Simms likely played the entire fourth quarter of Sunday’s game with a major organ inside his body cavity bleeding profusely. And that is pretty fucking badass.

But even more badass than that is the fact that Panthers’ defense hit a man so hard and so often that he had to have his spleen removed. Usually a sentence like that is written as comedic hyperbole. But the Panthers, in this case, literally did it. Fucking sweet. That’s why football beats all the other pussy sports. I think the Panthers should be allowed keep the spleen as a trophy, and that they should be allowed to roast and eat the spleen family-style, in a curry sauce with basmati rice and naan. Maybe some daal on the side.”

We shouldn’t take this too literally, and not just because of the health risks of eating spleen. Magary was, and still is, primarily focused on revealing our own absurd sporting tendencies through hyperbole, and this is no exception. Even so, it’s hard to imagine Magary writing something like this today. In February of 2012, when the extent of the damage concussions can do to the human brain was painfully clear, Magary was asked in his weekly mailbag if he would let his kid play football. He titled that week’s mailbag “Only A Fool Would Want His Kid To Play Football.”

“I would never encourage my kid to play football… Even if you used every advanced piece of safety equipment and you taught your kids to never lead with their head, they'd still go out there and put their heads down. NFL players have a hard time helping themselves when it comes to putting themselves in harm's way. And those are grown men. Kids, who are far stupider, are gonna happily discard those precautions for a chance to look all tough for daddy.”

Although spleens and brains are not the same organ, this is a snapshot of the general sense of contradiction and unease that has defined the rapid recent transition from gleeful YOU GOT JACKED UP choruses to heavily spun player safety campaigns. Magary is (thankfully) still Magary, but he (justifiably) doesn’t want his children to be brain damaged by their recreational sports. He’s smart enough to know that these are two tough things to have in mind at the same time. Violence remains a necessary cornerstone of the sport, and a big part of what the NFL sells so well. It’s just that everyone is a little more circumspect—or at least somewhat quieter—when it comes to talking about it.

In a way, Jacked Up is also a window into football’s cultural change. In somewhat mysterious circumstances, the segment was replaced in 2008 with “C’Mon Man”, in which every analyst picks a blooper or silly mistake made in the previous day’s game. Rumors abound that the NFL asked ESPN to cut the segment. Now, as Mike “If God had wanted man to play soccer, he wouldn't have given us arms" Ditka makes fun of athletes and coaches for doing dumb things, it seems the NFL is about irony.

It might not have seemed all that important at the time. But the way we talk about and celebrate hits is much more important than what the league office tells us to think about them. A $50,000 fine against a fabulously wealthy athlete tells us nothing about the permissibility of an act—you and I have both received speeding tickets, I assume, and this hasn’t altered our grand perception of the morality of driving fast. But the way in which we celebrate or condemn those hits matters more, because it might actually affect how many of those hits happen—the NFL is trying to do business, and if their product seems too needlessly, heedlessly brutal, it will also seem less appealing. When Jacked Up went away, it was one fewer voice telling us that the destructo-factor of big hits were an important reason to watch football. It hasn’t been replaced.

Of course, not all of us have transitioned from celebration to sympathetic cringing. Some fans, it seems, still long for the days when a big hit was a big hit and dirt was a magical healing lotion. Just this preseason, Tom Jackson’s long-time partner on NFL Primetime and NFL Countdown, Chris Berman reacted to a dangerous and illegal hit with the same “Ooooooooh!” one could have heard from Michael Irvin during old Jacked Up segments. It’s a sound you’ll hear in various living rooms across the country, still; it’s one you might make yourself if you’re not thinking about it.

As for myself, I shielded my eyes. Sports are supposed to be fun, and watching a bunch of men suffer brain damage isn’t my idea of fun. (Also, Chris Berman was having fun, which is a pretty definitive signal that I shouldn’t be.) So I muttered a quick plea of hope for this crazy world and this dazzling, dominant sport that still can’t quite keep itself from being happy when bad things happen to other people we don’t know. And I turned on something else.

Aaron Gordon lives in Washington, D.C., and has written for Sports On Earth and BuzzFeed. He tweets about movies and the Hartford Whalers at @A_W_Gordon.