Lean in? Here's why the glass ceiling still exists 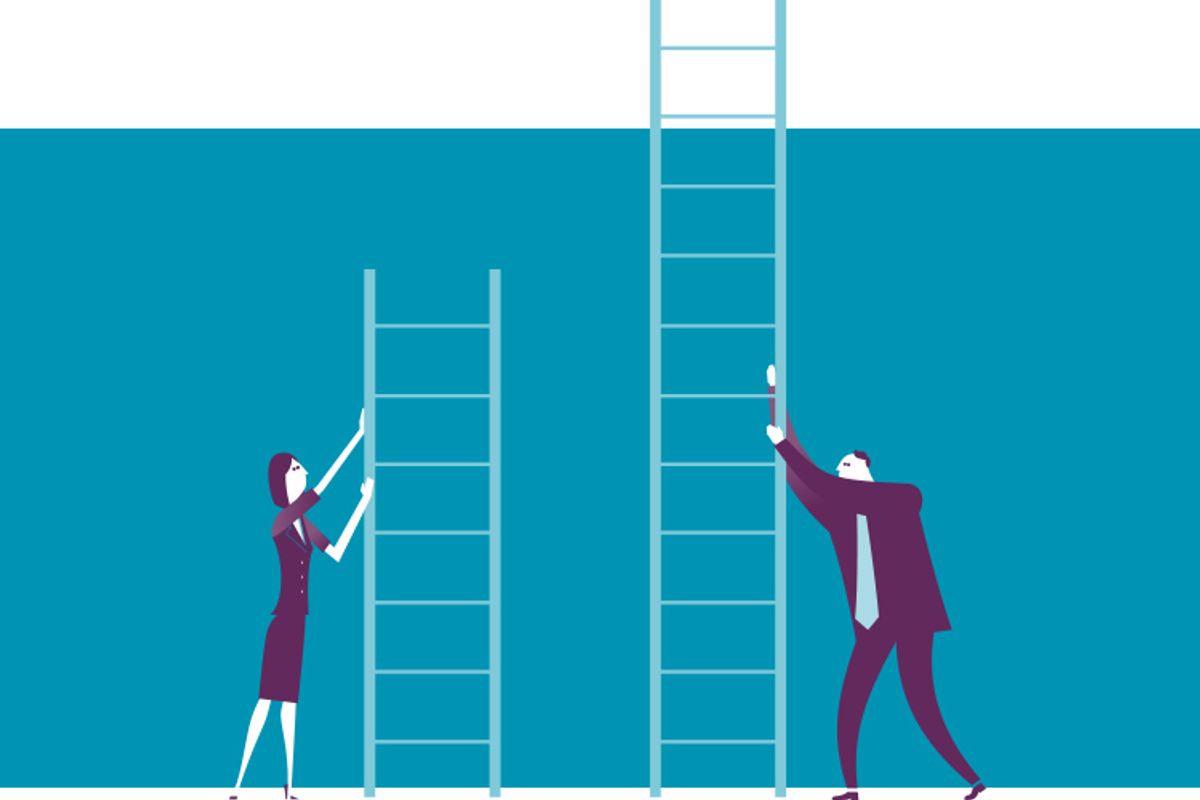 At every women’s conference, in every think tank report, at every celebration of Women’s History Month or International Women’s Day, the same data are repeated. I’ve said them so many times myself that I can reel them off from memory. But they are crucial, and they bear repeating once again. Only twenty-one companies on the Fortune 500 list are run by female chief executives. Only 16.6 percent of these companies’ board members are women. Women account for only 16 percent of partners at the largest law firms in the United States, and only 19 percent of the country’s surgeons. Across the board, women earn on average twenty-three cents less than men for every dollar that they earn.

Two things, of course, leap out from this rather depressing list. First, that the numbers are so similar across even hugely different industries (movie directors and accountants, for instance). And second, that the vast bulk of them seem stubbornly cemented at around 16 percent. It’s as if some evil grim reaper came regularly to mow down any female who dared to peek her head above the mandated allotment. Women? Yes, we love them. Please, give us more. Oh, no; no, wait. Not that many more . . . there seems to be a mistake . . . BEGONE!

What makes this accounting even more dismal is that it is no longer credible to blame the proverbial pipeline. For decades, after all, the dearth of women at the top of organizations could easily be explained by the dearth of women anywhere in the organization. No female surgeons? Well, of course not, if there are no women in medical school. No female law partners? Wholly predictable if there are no female associates. But the pipeline to the top has been full now, or at least plentiful, for over twenty years. In 1984, the year I entered graduate school, 31 percent of graduating physicians were female, as were 36 percent of graduating lawyers and 37 percent of newly minted Ph.D.s. By 1994, women constituted fully 50 percent of graduating physicians, 46 percent of graduating lawyers, and 48 percent of Ph.D.s. Theoretically, all of these women have now been in the workforce for somewhere between fifteen and twenty-five years, more than enough time for them to have soared, crawled, or shouldered their way to the top. But they haven’t. Instead, as the oft-repeated numbers show, women’s position in the ranks of power has hardly surged ahead. Think about it. In 1980, there were eighteen women in Congress (3 percent) and two in state governorships. Now there are ninety-eight (18 percent) and five, respectively. In 1980, there were 58 female mayors of major American cities; now there are 217. Yes, women ran (unsuccessfully) for both president and vice president in 2008, but women also ran (unsuccessfully) for president in 1964, and vice president in 1984. Without question, women have advanced professionally since the days of the feminist revolution, but that advance has been slower—much, much slower—than anyone really expected.

To get a more nuanced sense of where, and how, women are getting stuck, it’s useful to look at a few fields where the deceleration has been most pronounced. In law, for instance, women seem particularly prone to being jammed into the 16 percent cranny. Since the 1980s, as noted above, women have been filing into law schools, accounting for more than 40 percent of law degrees by 1986. Yet the percentage of female partners at major law firms has remained stubbornly set at around 16 percent, and the average compensation of a male partner is still almost $90,000 higher than that of his female counterpart. As a result, according to Judge Judith Kaye, the first female chief judge of the State of New York, “what the profession still lacks is a critical mass of women to mentor junior associates approaching pivotal points in their careers, to ensure not only implementation of diversity programs but also accountability with regard to these programs, or to influence firm-wide decisions from the management ranks. The statistics tell us that we are definitely not there yet.” Similarly, while women have proliferated across the lower and middle tiers of finance, they show few signs of achieving anything close to equal representation at the top: only 2.7 percent of CEOs, 16.6 percent of executive officers, and 18 percent of board directors. When I asked Ina Drew, former chief investment officer at JPMorgan Chase, and one of the banking sector’s highest-ranking and longest-serving women, how to explain this discrepancy, her answer was succinct: “The top echelons of finance still lack mentors that women desperately need . . . If women remain unfulfilled by their positions without the potential for growth and discouraged by male aggression, the discrepancies will persist.”

My friend Jill is a case in point. Born on a farm outside Lincoln, Nebraska, Jill attended college on a full ROTC scholarship. She studied Chinese as an undergraduate, earned a black belt in karate, and eventually became an ordnance officer in the Army. For four years, she dismantled bombs, and managed troops, and served on security detail for the White House. Needless to say, this is not a woman who scares easily, or who shies away from hardship. Jill married Paul, a classmate from ROTC, and helped support him through medical school. Then she entered law school, moved to Michigan, and gave birth to three kids—all in fairly rapid succession. For a while, it worked. Paul put in long hours as a newly minted orthopedic surgeon; Jill opened a small private law practice; and they hired a nanny they liked. Slowly, though, the troubles crept in. Paul was on call many nights and weekends, leaving Jill to juggle the kids, the errands, and the housework. Her cases were intriguing, but limited by her inability to bring on additional partners or devote more than fifty hours a week to the job. Their parents lived far away, and Jill never quite found the energy to put three toddlers in the back of the car and make the long drive back to Lincoln. So she slowly wound the practice down, throwing herself into volunteer work and her sons’ tennis teams. Now the boys have graduated, though, and the big house is empty. Jill travels some, and works out, and tends to her increasingly far-flung family. But she rues the career she didn’t have, and the regrets that hound her frequently. “This isn’t what they gave me a degree for,” she confided recently. “Somewhere, I screwed up.”

My friend Shireen’s regrets, meanwhile, are of a different sort. Petite and vivacious, she is one of those rare women who always manage to look both casually dressed and meticulously put together. Shireen went to business school in the early 1980s, when women were still rare among the ranks of MBAs. She graduated near the top of her class and took a fast-paced job in media marketing. She also met and married a fellow student, a hardworking son of Mexican immigrants who joined a media conglomerate as well. Shireen and Miguel worked happily together through the first few years of their marriage, grabbing takeout, skipping weekends, and sharing stories. They worked through the arrival of baby number one, and baby number two. After about eight years, however, and the arrival of baby number three, Miguel’s career march accelerated. Suddenly, he was working hundred-hour weeks and shuttling back and forth among the company’s expanded global operations. Without much fanfare, Shireen quietly stepped down. “What was I going to do?” she recalls. “Leave the kids with nannies around the clock?” So she took on all the child care, and the housework, and the increasingly large role of becoming a corporate wife. Today, even with her kids now grown and out of the house, Shireen maintains a breakneck schedule. She serves on several nonprofit boards and is involved with a score of local charities. She and Miguel have a strong and happy marriage. But she wears a veneer of wariness, a wariness that stems from suspecting what others want of her, and why. “People always say that they want me for my brains or my energy,” she says with a smile. “But I know what they mean. They want Miguel’s money. And the funny thing is,” she continues, “that I really do have a lot of brains and energy. Or at least I once did.”

Where women have made significant strides, for better or worse, is at the lower end of the pay scale and professional spectrum, in areas such as nursing, hairdressing, and middle school teaching, where women wholly dominate men. As reported in the 2009 Shriver Report, fully half of all workers in the United States are now female, and mothers contribute to their family’s earnings in nearly two-thirds of American households. Mothers are the primary breadwinners, in fact, in four out of every ten households; and half of these mothers are single. These are important facts to consider, and complicated to think through. Because what does it really mean to have a household run by a single mother earning, on average, only $36,000 a year? Or to have two working-class parents holding down jobs and struggling to afford day care for their kids? The good news is that millions of women—black, white, Latina, and Asian—are financially independent, working in full- or part-time jobs to support themselves and their families. The bad news, though, is that many of these women are only barely hanging on, operating along the bottom of the social and economic pyramid, where women have long struggled and from which they were supposed to have escaped.

And certainly, some have. In 2009, women entrepreneurs ran more than 10 million businesses with combined sales of $1.1 trillion. As of 2007, firms owned by women in the United States employed 7.6 million people. But the aggregate numbers—that darned list of statistics again—make clear that most positions of power in this country (and indeed, around the world) are still persistently held by men. Women are flocking into college, into graduate programs, into entry-level and midlevel positions across every conceivable industry—but they are falling out well before they reach the top.

It isn’t legalized prejudice anymore. It isn’t barriers on the way in. And it’s not just men being mean. Indeed, most men in visible positions of power today are almost desperate to have some reasonable number of women in their ranks. So what accounts for the bottleneck? For the clogged pipeline, the glass ceiling, the pervasive code words meant to capture the reality that women are simply getting stuck?

Clearly, painfully, they’re getting stuck because so many of them are choosing to stop. Women are not getting fired from midlevel positions at accounting or law firms; they are not disproportionately being denied tenure at major research universities. They are deciding, like Jill and Shireen, that they need to stay at home, or work part time, or step away from the fast track. Individually, each of these women’s moves may make great sense. Together, though, they have created a landscape where women are still scarce, and where the clashing visions between what is and what was expected to be makes them feel scarcer still.

Excerpted from "Wonder Women: Sex, Power, and the Quest for Perfection" by Debora L. Spar, published in September 2013 by Sarah Crichton Books, an imprint of Farrar, Straus and Giroux, LLC. Copyright © 2013 by Debora L. Spar. All rights reserved.

Debora L. Spar is the president of Barnard College.