A Netflix for e-books arrives

All-you-can-read for a set fee? A digital book club? New ways to consume e-books could change how we read 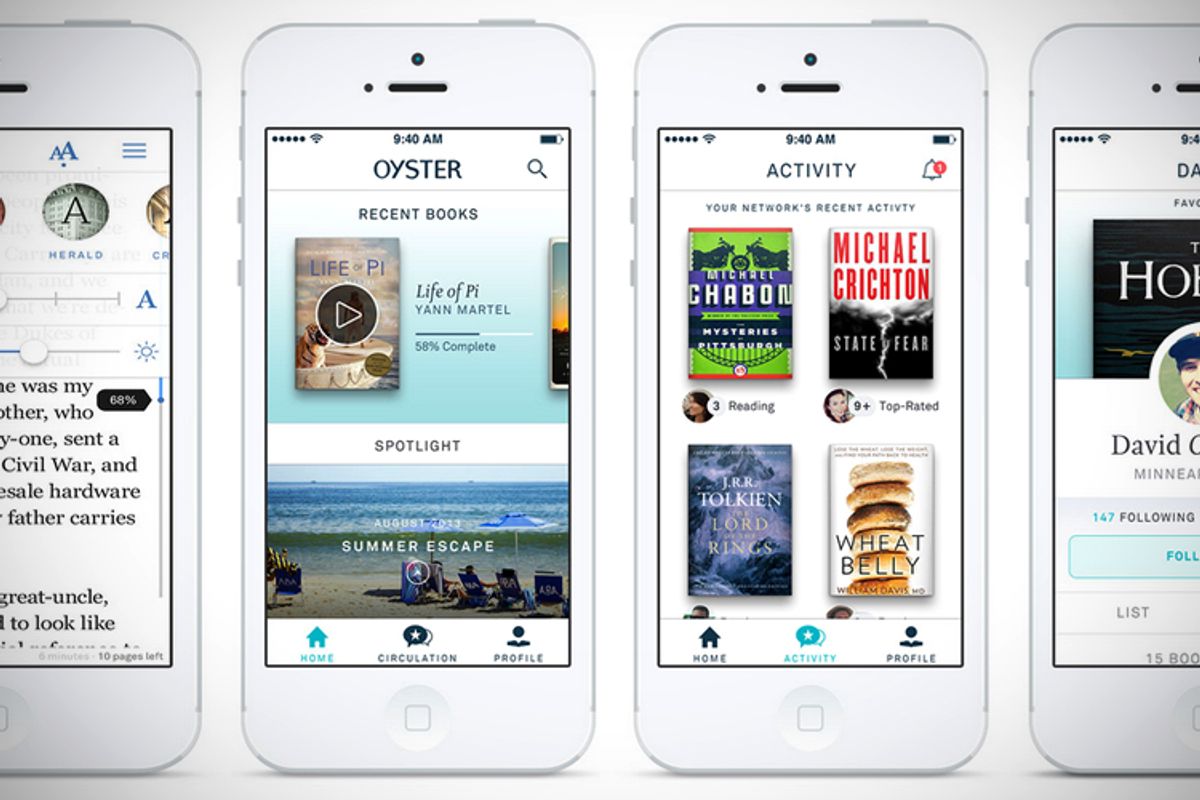 The leveling off of the e-book market suggests that what once seemed like a boom destined to overwhelm and replace print publishing has in fact become a thriving submarket. (A recent survey of travelers at London's Heathrow Airport found that even in circumstances where you'd expect e-books to prevail, 71 percent of those polled said they preferred to hit the road toting print books.) All sorts of people read e-books, but a significant portion of that market is made up of what are called "heavy readers." A Pew Internet study of e-reading showed that the average e-book user reads 24 books per year, compared to the 15 read by people who don't use e-books.

So it makes sense that these readers might welcome new ways to feed their habits. The notion of "a Netflix for books" has been kicked around for a while. Oyster.com, a ballyhooed new venture backed by such digital glitterati as Sean Parker and Peter Thiel, just launched its beta version, but it's not the only promising option out there.

Commentators on the book publishing business tend to forget that people read and use books in vastly varied ways. Some purchase only the most celebrated titles, in hardcover, read them slowly and display them prominently on shelves when they're done. Others like old, obscure books that they collect obsessively from used bookshops but may never read at all. Still others burn through as many as three paperback novels a week, books they have no plans to reread. Some collectors would never dream of lending their treasures. Others finish a book and pass it on to a friend, either as a loan, gift or trade for another title. (There are also services like Paperback Swap that pool together used-book traders to maximize the likelihood of getting a book you want.)

If, for example, you're the kind of reader who doesn't care much about having the latest title everyone's talking about, if you're willing to pass up the new George R.R. Martin opus and give, say, Guy Gavriel Kay a shot instead, then Oyster might be just the ticket. Most of the titles it offers -- around 100,000 of them -- are backlist, rather than new releases, but if you're used to waiting for the paperback to come out, that shouldn't present much of a problem. And if you read a lot, Oyster's $9.99 monthly subscription fee for access to as many e-books as you want could save you a lot of money. In other words, it is a lot like Netflix Streaming, where convenience and economy make up for only occasionally being able to access the content you most want.

Oyster has a few annoying quirks, however. The interface is beautiful, but it's only available on mobile phones (the website promises an iPad version will arrive later this fall). And although you can sign up for the service on the Web, you can't (so far) search its catalog on your laptop or desktop computer. Since searches on the iPhone app deliver their results in the form of cover art, they can be difficult to read on a tiny screen. While being able to browse the catalog on the go is an essential option, it's not very helpful unless you know exactly which title you want and Oyster also happens to have it -- an unlikely situation given the still relatively limited selection.

Oyster has no queue feature to enable the user to browse through and flag promising titles at her leisure. There are a bunch of social-media sharing features that are of so little appeal to me I won't attempt to evaluate them. (If you very much value the ability to post whatever you're reading to Facebook, could you please explain why in the comments thread? I just don't get it myself.) In some respects, Oyster looks like what young men in the technology industry want in an e-book subscription service, plus a few concessions they imagine will appeal to the demographic that makes up the majority of e-book consumers: adult women.

With the right selection of titles, Oyster could be a godsend for, say, unpicky genre fiction buffs who just want a competently executed hit of mystery, romance or intergalactic adventure to consume and forget. If the service doesn't carry one paranormal romance series but can suggest a reasonably similar alternative, that's good enough. (This is how most of us use Netflix Watch Instantly, which has a few marquee items, plus a lot of good-enough stuff for when you've exhausted those.) But the well-heeled matrons of the book-club scene -- a market apparently aimed at by Oyster's tony presentation and the featuring of such titles as "The Life of Pi" and "Like Water for Elephants" -- is going to quickly get frustrated by the absence of current It books (What, no "Gone Girl"?) and turn elsewhere.

More particular readers who also prefer to own the e-books they pay for might consider eReatah, a monthly subscription service that also launched its private beta this month. (The peculiar name, to judge by the logo, has something to do with cheetahs.) Members pay a set rate every month for a set number of e-books: $14.99 for two titles, $25.50 for three, and so on. While the e-books must be read on the eReatah app, you can keep them even if you end your membership. (Note: These titles are copy-protected, like Kindle and Nook e-books.) Like Oyster, eReatah currently carries only a limited number of titles (85,000 -- both services say they expect to ink arrangements with additional major publishers in the near future). But eReatah has signed on Simon & Schuster and will be making that publisher's fall front list available; subscribers can get both the new Stephen King novel, "Doctor Sleep," and Amanda Lindhout's Somalia memoir, "A House in the Sky" -- two of the fall's big books -- for $7 less than they'd pay for both Kindle editions.

None of this is especially new, of course. EReatah is essentially a book club, like the kind that once regularly supplied a significant portion of the American public with its evening reading. The Oyster resembles the private circulating libraries of the 18th and 19th centuries, when most people couldn't afford to buy books and so subscribed to clubs that allowed them to spread the cost over many members. Both services provide curated lists, and eReatah will eventually launch a custom-built recommendation engine a bit like the one Netflix uses to suggest movies. But curation is easier to boast about than to accomplish, especially with books, a fact driven home when I stumbled across Justin Torres' "We the Animals" (a collection of linked literary short stories about the childhood and coming-of-age of a gay Puerto Rican boy) in Oyster's "Women's Fiction" list. Even Amazon isn't very good at suggesting the next book you might want to read -- or at least, its customers rarely rely on it for such advice. Most readers (e- or print) still prefer to heed the advice of trusted friends instead. For some things, the human touch remains indispensable.