Miss America brushes off the bigots 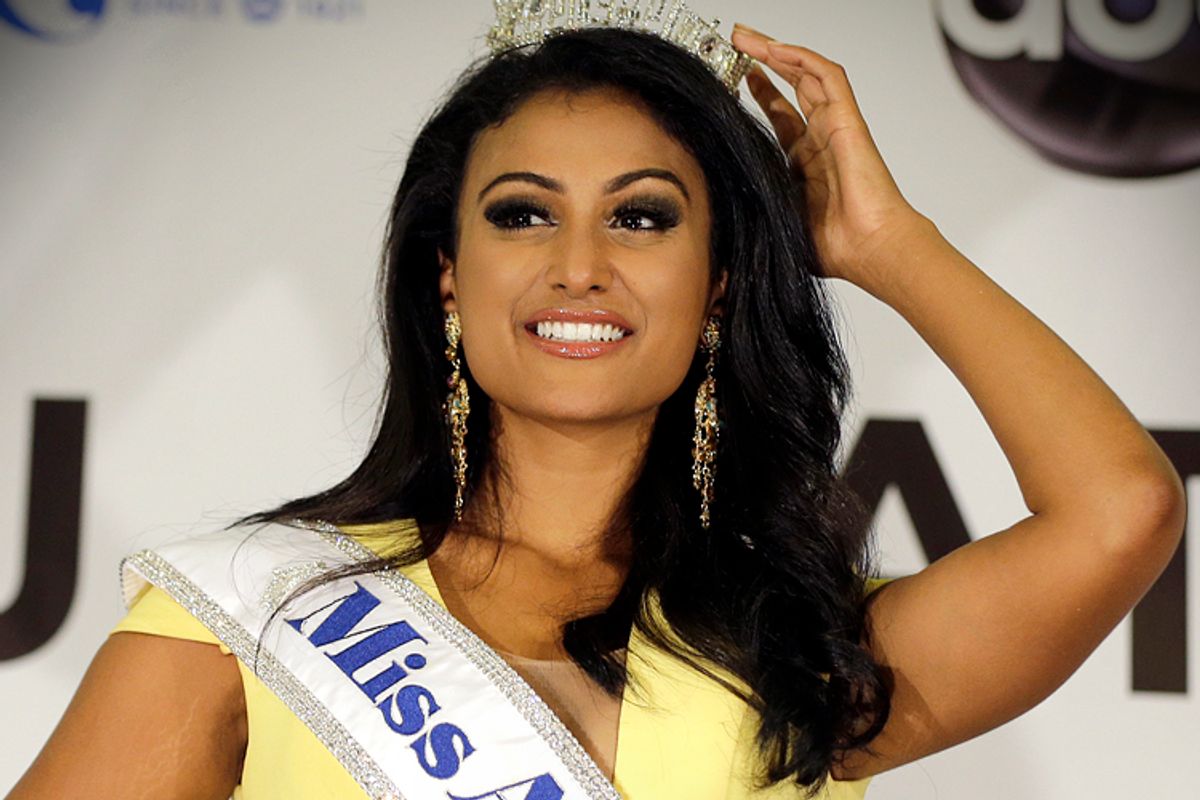 There's only one thing dumber than a bigmouthed racist -- a bigmouthed racist who can't even get his racism straight. And Sunday night, that particular brand of stupid was on abundant display after 24-year-old Miss New York, Nina Davuluri, won the Miss America pageant.

Aside from the first, obvious question – who knew anyone still even cared about the Miss America pageant? – the vocal response to the coronation of Ms. Davuluri raises another mystery. How is it possible that individuals who are at least functioning enough to turn on a phone or computer and type words on it can be so brain dead? The new Miss America Davuluri is a former dean's list student, an aspiring cardiologist and recovering bulimic. She's also now the pageant's first Indian-American Miss America, a woman who performed a "Bollywood fusion dance" for the show's talent competition. And if you expected a deluge of racist trolling to follow because an Indian woman now has the word "America" attached to her name, you weren't disappointed Sunday night. On Twitter, a Mr. CHEEZ-IT, for example, a man whose bio explains he'd "rather be cummin then stroken" (sic) swiftly declared, "Miss America? You mean Miss 7-11." And a One Proud Honkie asked, "How can you be Miss AMERICA and look like you should be a gas station clerk or motel owner?"

If you thought the haters would be outraged that a "foreigner" – Davuluri was born in Syracuse -- took the crown, you'd also have been correct. But if you expected the bigots to at least get their racism right, you were in for a letdown. As BuzzFeed points out, the dopes were swift to express their disappointment that an "Arab" had won, wailing that her victory was a "slap in the face to the people of 9-11" (Related: Who are "the people of 9-11"? Are they related to the People of Wal-Mart?) and calling her a "terrorist" whose victory was for al-Qaida. There was also something about "Egypt dancing." And it wasn't just the illiterate backwater yokels spewing this nonsense either -- Fox News & Commentary host/professional troll huffily tweeted that "The liberal Miss America judges won't say this - but Miss Kansas lost because she actually represented American values" and then crowned Davuluri "Miss Politically Correct America."

This year's competition had already garnered a higher than usual amount of attention even before Davuluri won, thanks to that attention-getting presence of Miss Kansas, Theresa Vail. In the days leading up to the competition, the blond, blue-eyed Vail seemed somehow the pageant's big diversity contestant. In a contest famed for cookie-cutter beauties, Vail was a deer-hunting, tattooed member of the Kansas Army National Guard’s Medical Detachment with a major in Chinese and chemistry. In terms of subverting the image of a traditional beauty queen, she seemed to have the year locked. She also represented a particularly beloved American bombshell – a blonde with a gun. For her to be bested, and not just bested but bested by someone with dark skin, well, this was obviously the work of those Indian terrorists who blew up the World Trade Center, right? Who knew that people who watch beauty pageants were such crazy, angry conspiracy theorists? I thought it was all grandmas who don't know how to change the channel. Apparently instead it's racists who've never seen a map or read a newspaper.

On Monday, Davuluri brushed off the inanity, saying, "I have to rise above that. I always viewed myself as first and foremost American." Which she is. Whatever you think of beauty competitions, she's also, by the way, super-beautiful, which is kind of the point of the whole thing anyway. And with her victory, Davuluri has made an outmoded, quaintly sexist relic somehow relevant – subversive, even. She's sparked a conversation about what it means to be truly American (Hint: The qualifications don't include European descent) and exposed the racists in their astonishing ignorance. She showed that while it's grotesque enough to hate, to hate without any degree of geographic, historic or cultural accuracy takes a person to a super-achiever level of grotesque. And if there were prizes to be handed out for sheer absurdity, a whole lot of people would be wearing tiaras today.