Wind turbines are either making people sick or driving them crazy

For sufferers of "wind-turbine syndrome," renewable energy is the stuff of nightmares 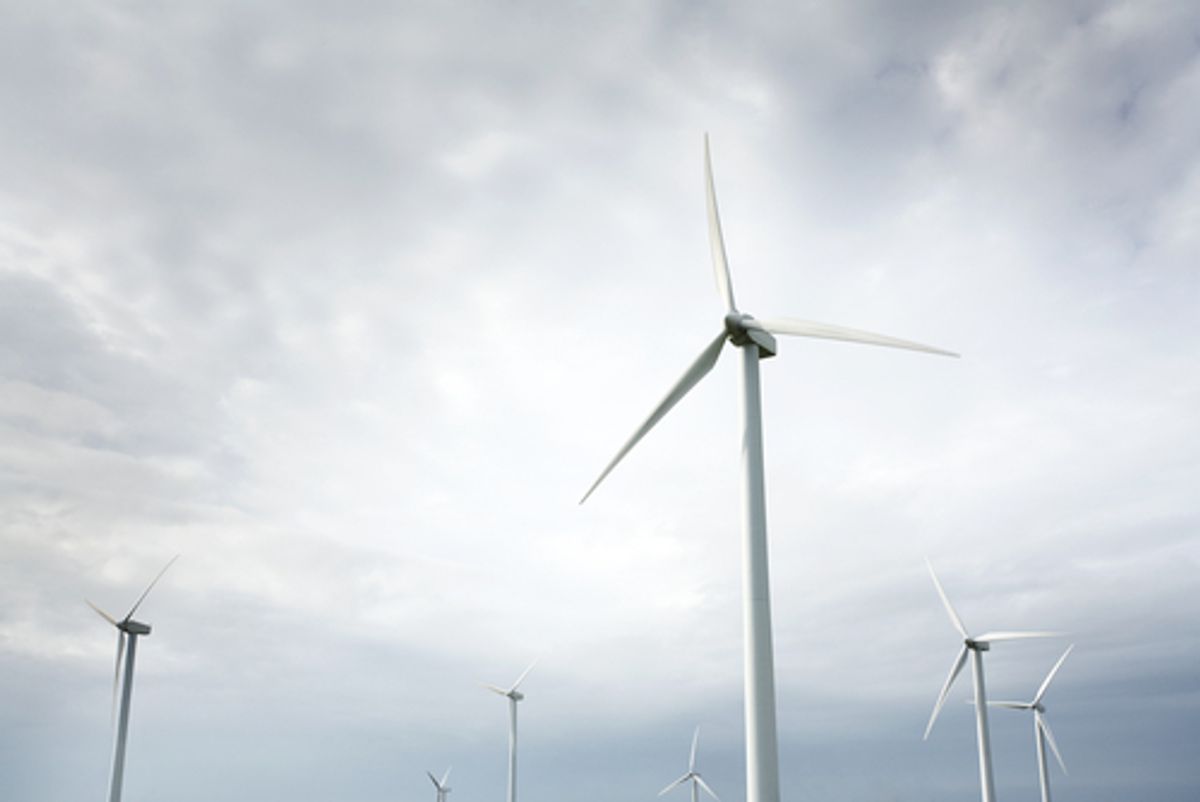 Wind-turbine syndrome is the disease you've never heard of, and many will tell you it doesn't exist. The diagnosis was only first named in 2006, but it's become more common as its suspected cause proliferates: Wind power is America's fastest-growing energy source, and some people insist it's making them sick.

Kristen French investigated the phenomenon for New York magazine. Plenty of people, she found, were eager to testify to an array of symptoms:

In the past decade, hundreds of people who live near wind turbines in places like Massachusetts, New York, Wisconsin, and Japan have reported that the windmills are giving them a litany of ailments. The first complaints were recorded in 2003, when a British physician wrote an unpublished report about 36 people in the U.K. who said the turbines made them sick. Then, in 2004, a physician in Victoria, Australia, distributed questionnaires to 25 people living near local turbines, and three of them wrote back about severe stress, insomnia, and dizziness. Even some Scottish Buddhist monks have complained of symptoms, including dry retching and crying. Last summer, Tharpaland International Retreat Centre sold its land to Scottish Power after its monks found they were approximately 70 percent less able to meditate.

The term "wind-turbine syndrome" was coined by a pediatrician who also happens to be married to an anti-wind activist, but French talked to pro-wind sufferers who claim to be suffering as well. Those affected, she writes, say they have sound reason to believe that turbines are the source of their troubles. "It’s caused by sound waves released when the giant turbine blades collide with the wind—not just the audible whooshing noise, but the rumbling vibrations created by a low-­frequency sound, or infrasound," she explains. But most sciences and doctors, along with the Centers for Disease Control and Prevention, either won't acknowledge it or flat-out don't believe it exists.

When she received the diagnosis from a doctor and believer, one sufferer told French, “It felt like I finally had a little validation for not being insane.” Being thought of as crazy is another experience shared by many who believe they have the syndrome. For Mark Cool, what started out as headaches and sleep disturbances after a 40-story wind turbine was installed near his Massachusetts home soon escalated into an obsession:

In June, he began waking up in the middle of the night and could only get back to sleep if he took refuge in the basement. When his headaches became more painful, he resorted to doing “all these weird scientific verifications,” touring the neighborhood and gauging how the severity of the pressure in his head correlated with his distance from a wind tower. He also kept track of how his symptoms were affected by wind direction and logged all of his data into a spreadsheet. The result: He only gets headaches and has trouble sleeping when he’s within a third of a mile of a turbine and the winds are blowing from the north or northwest. “I’ve done a lot of legwork on this,” he says. “I’m not a medical guy, but I know what I’ve experienced.”

Poorly understood syndromes are always hard to get people to take seriously: French draws comparisons to the controversy surrounding Lyme disease and the epidemic of tics that spread among high school girls in Le Roy, N.Y. The latter was blamed on a toxic spill from the 1970s but is largely believed by experts to have been psychogenic in nature. Indeed, only 24 of the 200 people living within a half-mile of Cool's turbine have complained of symptoms. Some studies have concluded that wind-turbine syndrome is a type of hysteria; it's less common, for example, in people who benefit economically from wind power and exacerbated in those with a "bad attitude" toward turbines.

Disagreement over the syndrome's true nature shouldn't preclude sympathy for the people who are being driven from their homes, or to banging their heads against the wall in frustration. Their complaints aren't sitting well, though, with those who see great promise in wind power as a cheap and efficient source of renewable energy. Still, the consequences could extend beyond individual suffering: French's piece opens with a scene reminiscent of the season 2 finale of "Breaking Bad," with two planes on a collision course. Only in this case, the air traffic controller responsible for the mistake was distracted not by his daughter's death of a drug overdose, but by the wind turbine that had become his a source of unceasing torture.

Disaster, this day, was averted. But next time we might not be so lucky.