How thinking about Glenn Beck can aid the writing process

Alice McDermott, Eric Lundgren and more fall novelists on how they psych themselves up to write 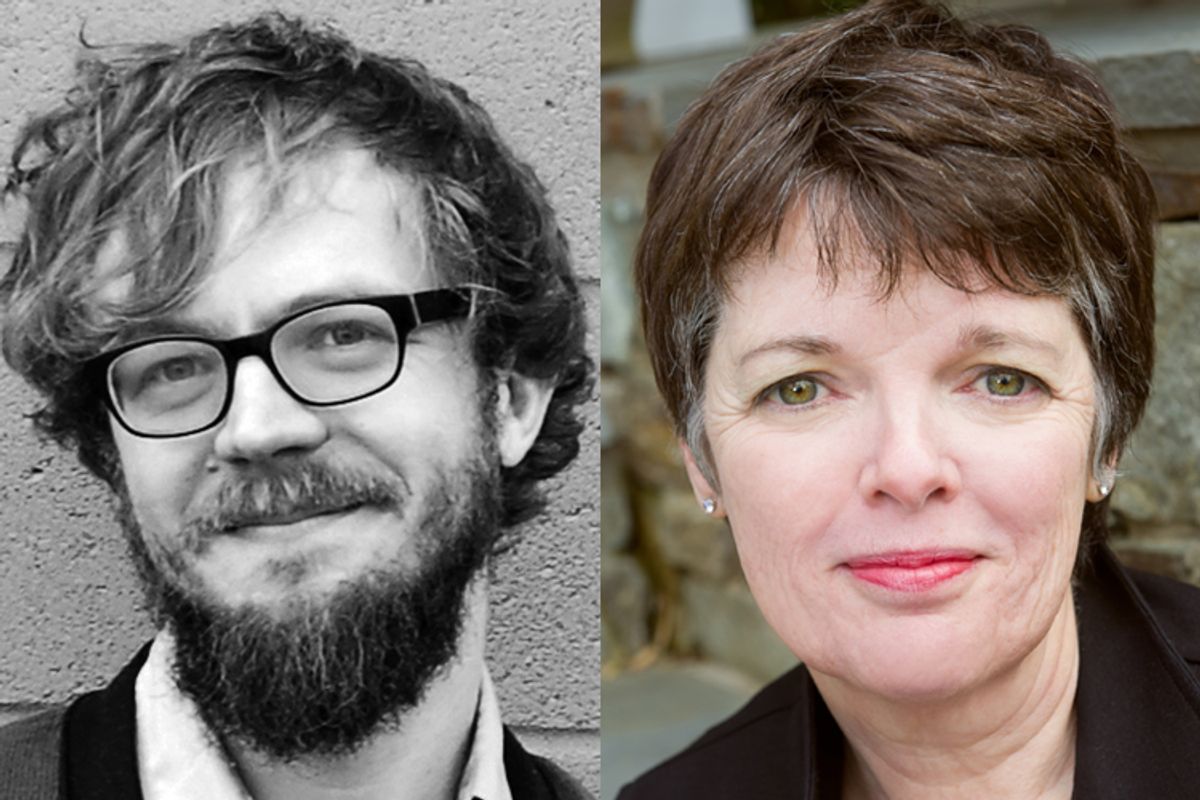 It’s fall, which means a spate of new, big books. Coming out around this time are novels by National Book Award winner Alice McDermott ("Someone"), Kathryn Davis ("Duplex"), Lauren Grodstein ("The Explanation for Everything"), Swedish author Anne Swärd ("Breathless") and Barnes and Noble Discover author Eric Lundgren ("The Facades"). As usual, I asked them a series of questions with various verbal restrictions on some of their responses.

KATHRYN DAVIS: It's a coming-of-old-age story.

ALICE MCDERMOTT: To borrow a phrase from Woody Allen — or maybe Tolstoy: Love and death.

ERIC LUNDGREN: Loss in the Midwest, both private and civic, experienced through a series of strangely designed public buildings, by a somewhat self-deluded guy who tries to be a detective.

DAVIS: My sixth-grade teacher, whose actual name was Robespierre Ichabod Fine (his mother was a fan of the French Revolution and of Washington Irving). All the animals I've ever lived with (Noodle, Hansel, Sam, Hudie, Ollie, Jim, Squeak, Batpuppy, Mowgli, Ophelia, Tiger, Skyler, Blacky, Yukon, Bodhi, Finny and Lucy). Clouds and the moon. Trails and gardens.

SWÄRD: Everyone that comes in my way: sometimes strangers, sometimes loved ones — sometimes even myself … I observe, eavesdrop and fill in the gaps with my imagination. I’m excessively interested in what trying to be a human being is all about. Especially when it comes to moral dilemmas. It’s like that old Roman guy, Terence, said: “I am human, I consider nothing human alien to me.”

GRODSTEIN: A beloved student of mine told me she believed the earth was approximately 6,000 years old. She was smart, she was thoughtful, and she was wrong. But I couldn’t discount her – I respected her too much. So I debated with her, using every bit of science and logic I had, but I still failed to convince her that the earth was billions of years old. And I think that’s where the story started.

MCDERMOTT: Without explaining why, and, most of all, without naming other authors or books, I can only say my novels are influenced by love and death.

GRODSTEIN: Sleep training my son. Attempting to garden, spending a lot of money on gardening stuff, and failing to grow even a single -- anything. Applying for tenure. Getting tenure. Realizing tenure meant spending the rest of my life in New Jersey, and deciding to feel okay about that. Taking my first bicycle ride as an adult.

MCDERMOTT: The usual wife/daughter/mother stuff: shopping, cooking, getting kids into and out of college, reading the paper.

SWÄRD: A lot of walking down the memory lane. Recalling my own childhood, adolescence, the beauty and sadness of it all. Trying to combine being a reasonably responsible mother of teenagers, and at the same time traveling the world – being on the road, going from one foreign country to another to write and explore.

LUNDGREN: Marriage to a brilliant urbanist. Odd job at the library. Public transit.

LUNDGREN: One reviewer called my protagonist a "worrywart" and a "schlubby, smoking cubicle jockey."

GRODSTEIN: “Juicy.” I hate the word juicy in describing anything: lips, plots, oranges. But especially novels. It feels – icky.  Reminds me of saliva.

MCDERMOTT: Don't yet know what words readers/reviewers will be using for this one. I dread "miniature." Heightism is the last unchecked prejudice.

SWÄRD: Something you have to learn ASAP as a writer is to forget stuff like that. Life is too short, your writing life even shorter. Still, some things do stick … I actually find words like “clever,” “skilled,” “refined” most disturbing, since writing novels is anything but a cerebral performance to me. It’s rather life or death.

DAVIS: Like being holed up with some crazy old nun.

SWÄRD: Sailor, like my dad used to be when he met my mum. He was on the Swedish American Line in the late ’60s, so I’ve heard the stories. Some of them deterrent, others tempting and irresistibly challenging.

GRODSTEIN: I would have been a psychiatrist and let other people tell the stories.

LUNDGREN: Night security guard at an art museum, though I can't guarantee that I wouldn't write between camera checks and perimeter strolls.

MCDERMOTT: Something in musical theater.

SWÄRD: Strong suit: integrity. It’s not really a “craft element”, but crucial for a writer. And – for good and bad – I think I have it to the extent where you might begin to call it obstinance. Always going my own way. This strategy is getting more and more important to me as the pressure increases (and being around for a while, translated into languages other than my own, the pressure does mount up…). My weakest spot is probably my writing method. I wouldn’t recommend it to my worst enemies! It’s an anti-method that can only be described as “creative chaos.” But ideally you should not be able to tell, seeing the result.

DAVIS: I've gotten to be pretty good at transitions. The good news is I can make them do my bidding. The bad news is they're not a substitute for plot.

GRODSTEIN: I like writing dialogue — I can hear my characters so clearly that writing dialogue often feels as much like transcribing something as it does like creating it.  But I wish I were better at straightforward description. I feel like I’m usually overdoing it or underdoing it, and it takes a lot of tweaking to get the details right. Take a kitchen: Is there a lamp in the room? What kind of lamp? Where is the lamp? Wait, who puts lamps in the kitchen? Isn’t lamp a weird word?  Etc. etc.

LUNDGREN: It's all hard for me. I work at getting the music of the sentences right, evoking the atmosphere. But there's a lot that I haven't yet managed to translate to the page. It probably boils down to characterization. I'd like to be better on tenderness, the ordeals and joys of the body. Maybe even contentment!

MCDERMOTT: Right now, I'd like to be better at short, snappy answers.

SWÄRD: That’s a relevant question. Megalomania is a severe thing. But the way I see it the damage is limited in this case, because in general people are reading less and less. I’m basically performing a dying art form… As long as people are still reading books at all, we should be a little happy.

LUNDGREN: I try to think about it culturally. I try to think about Charlie Sheen or Snooki or Glenn Beck, someone like that. My own voice, in comparison, could be just that momentary whine of feedback you hear when someone starts talking with their mouth too close to the mic. And it makes you a little uneasy for a second.

DAVIS: I give everyone the credit of being as curious (i.e., nosy) as I am about what makes other people and the world tick.

MCDERMOTT: I used to worry about this. But it now appears that the world is filled with people who believe that everyone should be interested in everything they have to say about anything — people who tweet, you might call them. I find this so astonishing, my own hubris pales in comparison.