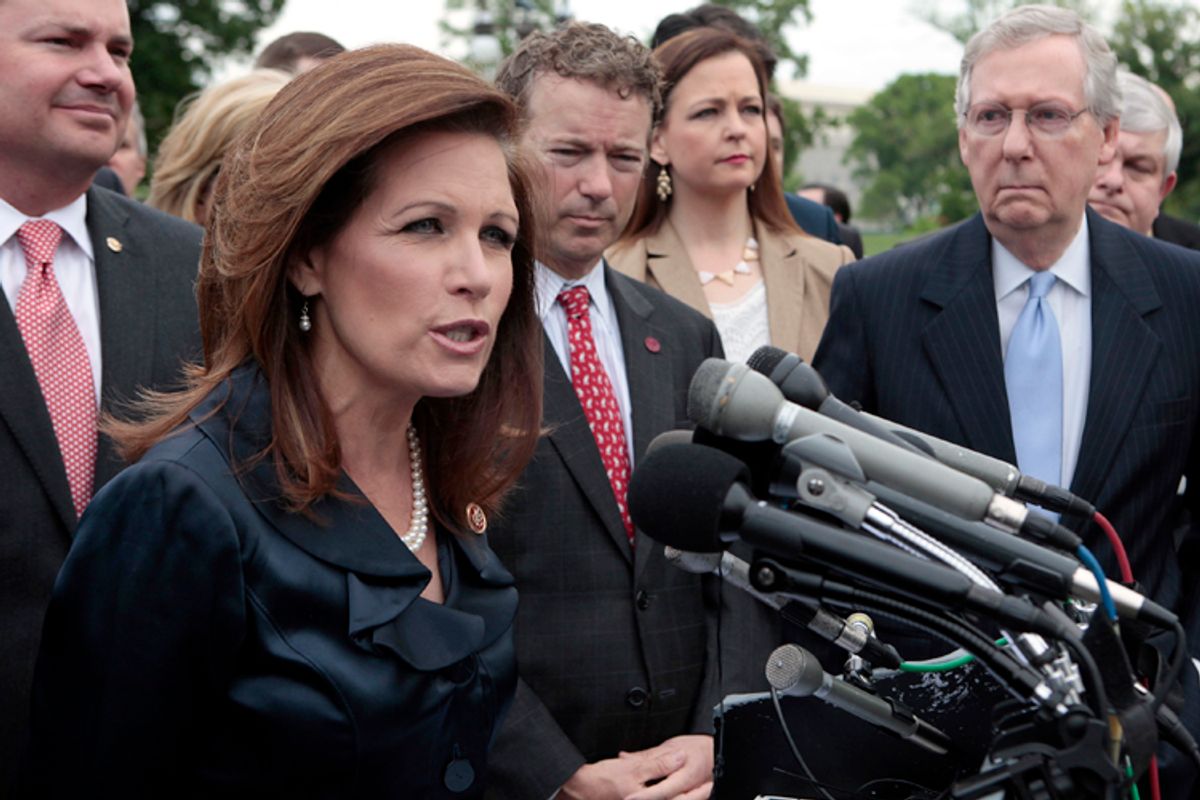 It seems like whenever the GOP's trust problem with conservatives hits a new nadir, party leaders decide the best way to fix it is by trying to dupe them.

That trust problem is severe right now because GOP leaders aren't willing to shut down the government or default on the debt if President Obama refuses to destroy his own healthcare law. And instead of just leveling with the right, and cutting it loose, the party's top brass is trying to manipulate rank-and-file members into voting for must-pass government funding and debt limit bills by tricking them out to disguise the fact that they're toothless.

We saw this play out last week, when GOP leaders had to pull the plug on a bill to a government shutdown that they'd dressed up as a bill to defund the healthcare law. They're at it again this week.

There is discussion in House Republican leadership circles about setting a debt ceiling vote before Sept. 30. If Republican leaders show in the next few weeks how they will use the debt ceiling to delay Obamacare, it will display that the party’s brass is serious about an all-or-nothing legislative brawl with Senate Democrats and President Barack Obama. That could help ease the passage of the continuing resolution to fund the government.

This sounds like Republican leaders are actually transferring brinkmanship to much more dangerous terrain. But they're really just exploiting the calendar and the right's tactical naiveté to avoid political and economic catastrophes. The debt limit deadline is a couple of weeks after the government shutdown deadline. If House conservatives agree to this plan, they'll be setting the party up to cave on the debt limit, after they've already released their government shutdown hostage.

It's a classic bait and switch. Give me what I want and the crown jewels could be yours. You can even touch them first.

Procedurally, this could play out a few ways, none of which ultimately get GOP hard-liners the Obamacare delay they want. Republicans could structure the debt limit vote the way they've structured the government funding bill -- to automatically delink the Obamacare provision so that the Senate can consider them discretely. This is the obvious rendering of the cave -- and unlikely to fool even the dimmest member of Congress.

Alternatively leaders could send the Senate a singular debt limit increase, replete with an Obamacare delay and other partisan GOP nonsense, followed by a government funding bill. Harry Reid would then leave the debt limit increase sitting on his desk, pass the bill to avoid the shutdown, and then address the debt limit bill separately. He could vote it down (likely on a bipartisan basis) or he could set up votes to strip all the nonsense out of it, which would put individual Republican senators in the uncomfortable position of choosing between fomenting a catastrophic debt default and affirmatively voting to kill a provision to defund Obamacare. The latter is akin to dressing up in a bull's-eye-painted sandwich board. It's perhaps the single surest way for a Republican member to invite a primary challenge. Either way, the government gets funded, the debt limit gets increased, Obamacare chugs along.

Lastly, House Republicans could pass an extreme debt limit bill, and refuse to send over the government funding measure until the Senate swallows the former. In that case Reid would shrug, the government would shut down, and Boehner would find himself in more or less the same position he's in now, except with less time and more political baggage on his hands.

If the definition of insanity (or desperation) is doing the same thing over and over again and expecting different results, then Republican leaders are trying to cloak theirs by changing costumes between rounds.

I can't imagine conservatives will be thrilled with any of these options. If the House leadership picks one, the usual suspects -- Ted Cruz, Heritage Action, etc. -- will quickly denounce it as gimmickry, and we'll be back to square one.