Wall Street: A history of occupation

It's been happening for centuries 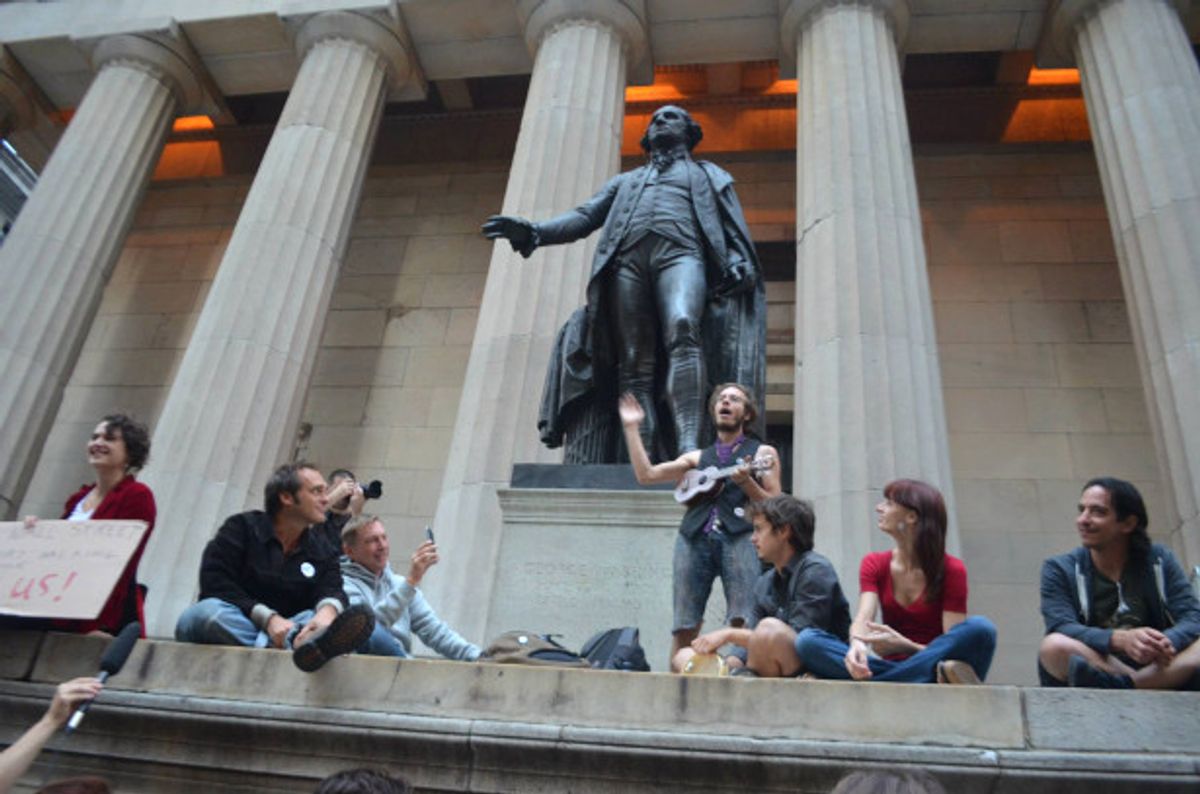 Today marks the beginning of the third year since Occupy Wall Street activists got off the Internet and began their real-world occupation at Zuccotti Park. Inspired by the home of the Egyptian revolution at Tahrir Square — tahrir means “Liberty” in Arabic — the new occupiers restored the park’s original name, Liberty Plaza. (Some also called it “Liberty Square.”) In the two months of the occupation, many thousands of people came from far and wide to converge on that magnetic, contested space.

Zuccotti Park was first called “Liberty Plaza” for good reason. It’s situated in a neighborhood that has been the site of struggles for liberation ever since European colonists first arrived. Occupy added one more chapter to an area already steeped in a history of resistance.

On the eve of the American Revolution, the Sons of Liberty tore down the statue of King George at the center of Bowling Green, a few blocks south of Wall Street. They then lopped off the crowns topping the fence surrounding the park and headed to Federal Hall to read the Declaration of Independence. It was no accident that Occupy Wall Street held its first assembly at Bowling Green, a place with profound revolutionary resonance.

Bowling Green is also where the privatization of land and the carving up of the commons began. At this spot, 150 years before the American Revolution, representatives of the Dutch West India Company met with native Lenape leaders and brokered a deal over the island of Manahatta. As the Lenape nation understood the arrangement, they had granted the newcomers the rights to steward the region for a period of time, to access its resources, to cultivate the land, to fish and hunt there, and to oversee the waterways. The colonists, however, meant to secure permanent claims for their company, and they immediately built the city’s first fort right at Bowling Green.

The struggles for liberation and freedom for colonists and those they colonized moved in very different directions. The words “liberty” (Latin, libertas) and “freedom” (Greek, eleutheria) both mean “unlike a slave,” but their meanings were once essentially opposed. U.S. historian David Hackett Fischer explains, “Liberty meant privileges of independence; freedom referred to rights of belonging.” A European pioneer or immigrant in North America sought liberation from her or his place of origin, while an African or native person in North America sought thefreedom to return home and re-root, to reunite with family and community. When slaveholders began to separate African family members as a matter of policy in 1712, they provoked the first coordinated slave uprising in New York history, the Maiden Lane Slave Revolt, right around the location of today’s Federal Reserve, about a block east of Zuccotti Park.

Within a few decades, no more than three blacks were legally allowed to meet face to face unless they were at labor. But nevertheless free and enslaved blacks and poor whites mingled and planned daily at the white-owned Hughson’s Tavern on the waterfront, by Liberty Place and Trinity Place. At the time, poor white workers, unable to compete with the uncompensated labor of enslaved blacks, had some reason to support the struggle against slavery; the specter of white-black collaboration terrified those in power. When a series of 13 fires erupted in the Wall Street area — the most significant of which was set within the walls of Fort George, the home of the governor — authorities believed the fires were part of a conspiracy hatched by poor whites and blacks to burn the city, kill wealthy white men, rape their wives and daughters, and elect a poor white as king and a freed slave as governor.

A street of many walls “Wall Street” is perfectly descriptive of its original purpose. First, Wall Street was a border: a spiked wall demarcating the lands expropriated by the Dutch West India Company, constructed to prevent the Lenape Indians from reclaiming their land. Soon, Wall Street became the site of a slave market, where owners hired out enslaved Africans by the day or week. Then the street became home to the nation’s first capitol, Federal Hall. It was the site of the first presidential inauguration, the first assemblies of Congress and the Supreme Court, and the drafting of the Bill of Rights.

Most of this history has been overshadowed, however, and what Wall Street now means for most people is the embodiment of U.S. capitalism as the home of the New York Stock Exchange. The Stock Exchange was established in response to Wall’s Street’s first financial crash, the Panic of 1792, and probably also in response to the demonstrations accompanying it. That crash landed at least one Wall Street crook, William Duer, in jail; hundreds of workers and merchants gathered in front of his new home — the debtor’s prison — threatening to disembowel him.

Occupy Wall Street was thus far from the first uprising at the heart of the capital of capitalism. Since the 1960s, LGBT rights and housing rights advocates, feminists, and environmental activists converged on the Wall Street area at least once a decade. In 1967, for instance, the Youth International Party — the Yippies, including Abbie Hoffman and Candice Bergman — scattered handfuls of dollars from the Stock Exchange’s visitor’s gallery down to the trading floor and did a dance proclaiming the “Death of $.” The year after that, on Halloween, a New York coven of 13 activists with the Women’s International Terrorist Conspiracy from Hell — WITCH — whisked down to Wall Street to hex the financiers; the Dow dropped five points the next day. 1979 saw an occupation of the streets around the Stock Exchange by tens of thousands of people protesting the nuclear power industry — part of a campaign that halted the construction of new plants in the United States.

In the 1980s, the AIDS Coalition To Unleash Power — ACT UP — organized “a coordinated, comprehensive and compassionate national policy on AIDS.” In 1987, hundreds of ACT UP activists strangled traffic at Trinity Place and Wall Street, disrupting business-as-usual for those profiting from the AIDS crisis. Two years later, ACT UP members infiltrated the Stock Exchange, chaining themselves to the VIP balcony, tooting mini-foghorns to drown out the opening bell as they unfurled a banner that said, “Sell Wellcome,” referring to the Wellcome pharmaceutical company. They successfully jammed up trading, and within days Wellcome cut its AZT retroviral drug prices by 20 percent.

Today, in the United States and many other parts of the world, there are no longer castles to set afire, no vertical walls protecting the feudal rulers. The mansions of the 1 percent are often out of sight and, as the Zapatistas say, their walls stretch over our heads to ensure that we stay below. Given that global economic power today trumps the power of any particular state, attempts to confront it by electing a slightly better president, or even by toppling a corrupt regime, may be futile. The best way to break through, as the Zapatistas also say, is to push from every direction — horizontally.

There is nowhere else to go — no new lands to colonize, no more physical frontiers to pioneer. But our own societies have been colonized, and we are put to work extracting the last of the world’s resources for the benefit of the 1 percent. The tents in Zuccotti Park appeared when America’s economic frontiers closed in on Wall Street and people came to take back what was stolen from them. For a moment, at occupied Liberty Square, we saw clearly that while a great deal divides the 99 percent, what we share is even better than a fight for national autonomy or individual liberty; it is a global struggle for freedom from displacement from our homes, the freedom to re-root and reunite our human family.

Last Sunday, just before our second anniversary, dozens of Occupy Wall Street activists held a walking tour of the Financial District, led by the participants and their memories of the occupation. We shared and documented our experiences resisting Wall Street’s ongoing privatization of the commons. If we understand that Occupy is not a brand, an organization or a self-designated group of individuals, but the continuation of a long struggle against the forceful imposition of poverty for many and wealth for a few, then the purpose it represents has only begun to manifest itself.