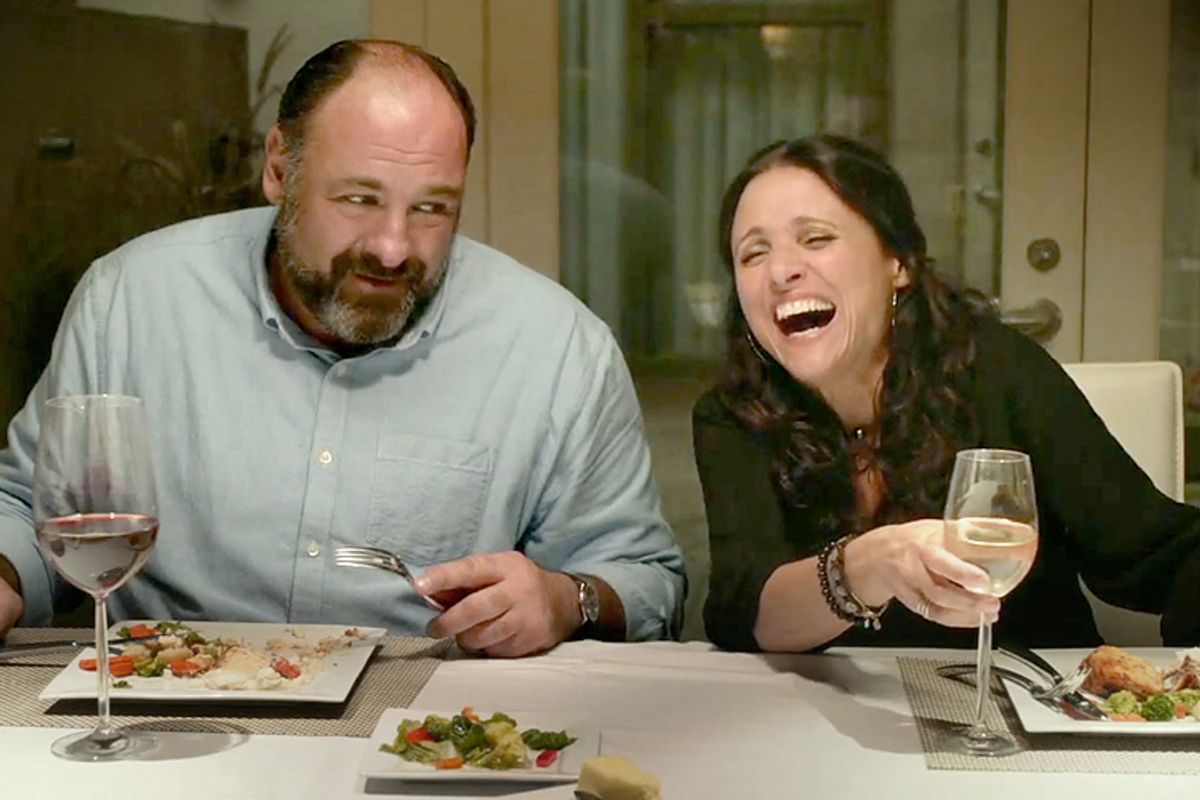 When Albert, the schlubby divorcé played by James Gandolfini in Nicole Holofcener’s acid-edged romantic comedy “Enough Said,” ruefully admits to his new girlfriend that he knows he needs to lose weight, it’s a moment far more painful than Holofcener intended. Gandolfini died suddenly while on vacation in Rome earlier this year, not long after completing work on “Enough Said.” Of course I don’t know whether his unexpected heart attack was preventable, or how much Gandolfini’s girth may have contributed, but the question has occurred to all of us. His delicate performance in this film, as a sad and gentle man on the other side of the human continuum from Tony Soprano, is an undoubted gift, but one that makes the loss of this memorable and charismatic actor even harder to bear.

Gandolfini fits surprisingly well into the universe of Holofcener, a bracingly intelligent and exacting writer-director who’s made just five features in her 17-year career, all of them searching for a sweet spot partway between Hollywood female-centric comedy and audience-repelling art-house eccentricity. She’s a little bit Eric Rohmer, a little bit Woody Allen (OK, a lot of Woody Allen) and a little bit of second-wave feminist autobiography with an overlay of self-lacerating wit. I’m still inclined to say that her best movie was the merciless 2006 “Friends With Money,” which was disastrously mismarketed as a mainstream comedy, but I won’t argue with those who carry the torch for “Walking and Talking,” her 1996 debut. On first viewing, I conclude that “Enough Said” is irresistible, and demands a second (and third) viewing right away.

Holofcener’s autobiographical urges have often been channeled through the persona of her close friend Catherine Keener, but this time around Keener plays a supporting character, a faintly bogus New Age poet who presents as an overly perfect potential BFF for our protagonist. That would be Eva, a divorced massage therapist played by Julia Louis-Dreyfus, who looks a good deal like Holofcener in the first place and appears (to my eyes) to have taken on the director’s wardrobe and mannerisms as well. This may well be how Holofcener sees herself: A New Yorker in L.A., a sharp-elbowed working woman just a touch too sarcastic for her surroundings, which are largely composed of nicer houses and more beautiful people. In a scene we see several times, Eva drags her portable massage table up a steep flight of stone steps, while her client – a handsome, athletic young man – watches her in blissful, idiotic oblivion. He’s not intentionally being a jerk, we later discover; like most of the people in Holofcener’s movies, he’s a smidgen too self-involved to pay attention to other people’s struggles.

Eva and Albert first meet at an uncomfortably fashionable outdoor party where they both pointedly announce that they’re not attracted to anyone present – precisely the kind of awkward, telling and accurate moment that Holofcener always gets right. When Eva hears the next day that Albert wants to ask her out, she’s not convinced – but then again, the fact that he’s overweight, bearded, balding and allegedly not attracted to her lowers the risk factor almost all the way to zero. Holofcener relies on the rom-com structure here to tell a story about two people who’ve been badly burned in relationships and aren’t quite sure it’s worth it to keep going; the promise of a conventional resolution makes the atmosphere of pervasive sadness around Eva and Albert bearable. (If, that is, audiences find it so. As ever, Holofcener’s dramatic method is to push right to the boundary line between comedy and pathos, between satire and realism.)

Eva and Albert’s unpromising first date goes gangbusters. They make each other laugh, and while one couldn’t call the chemistry between Gandolfini and Louis-Dreyfus electric or erotic, they make a strangely appealing couple: the great, kind, rumpled bear and the little neurotic bird. But at the same party where Eva met Albert, she also met Marianne, Keener’s character, and that relationship is also proceeding rapidly. You could in fact describe “Enough Said” as a tale of a passionate triangle, a moral fable about a needy and weak-willed person who is torn between two lovers and plays both of them false. Eva feels herself falling for Albert, a tremendously sweet man who is deeply uncool, wears bad sandals and possesses almost no furniture. But she absolutely flips for Marianne, with her flowing, graceful gowns, her decorous, “ethnic” home and garden, her alleged friendship with Joni Mitchell and her earnest coterie of female followers. While the big plot spoiler in “Enough Said” has been widely disseminated, I’ll simply say that it takes Eva way too long to figure out that Albert and Marianne already know each other.

There’s also an appealing subplot about the fact that Albert and Eva are both emotional wrecks about their daughters heading off to college for the first time. Eve Hewson (daughter of Bono) makes a strong impression as Albert’s evidently obnoxious offspring, and blogger-turned-actress Tavi Gevinson steals a couple of scenes as a neighbor who briefly (and inappropriately) become Eva’s surrogate daughter. For most viewers, understandably, Gandolfini’s final starring role will be the main attraction here, and it’s a wonder. Albert is an easily injured person and, as he admits, a slob. He’s also a man of huge heart, tremendous spirit and unvanquished pride, who pretty much slays Eva (and us) when he says to her simply, “I thought you liked me.” She does, of course. Gandolfini reportedly told Holofcener he couldn’t believe he was finally playing “the guy who gets the girl.” So he ends the film happy; it is we who are heartbroken.