Their dangerous dance completed, Nick and Jessica deal with the future. Is this a new romantic ideal? 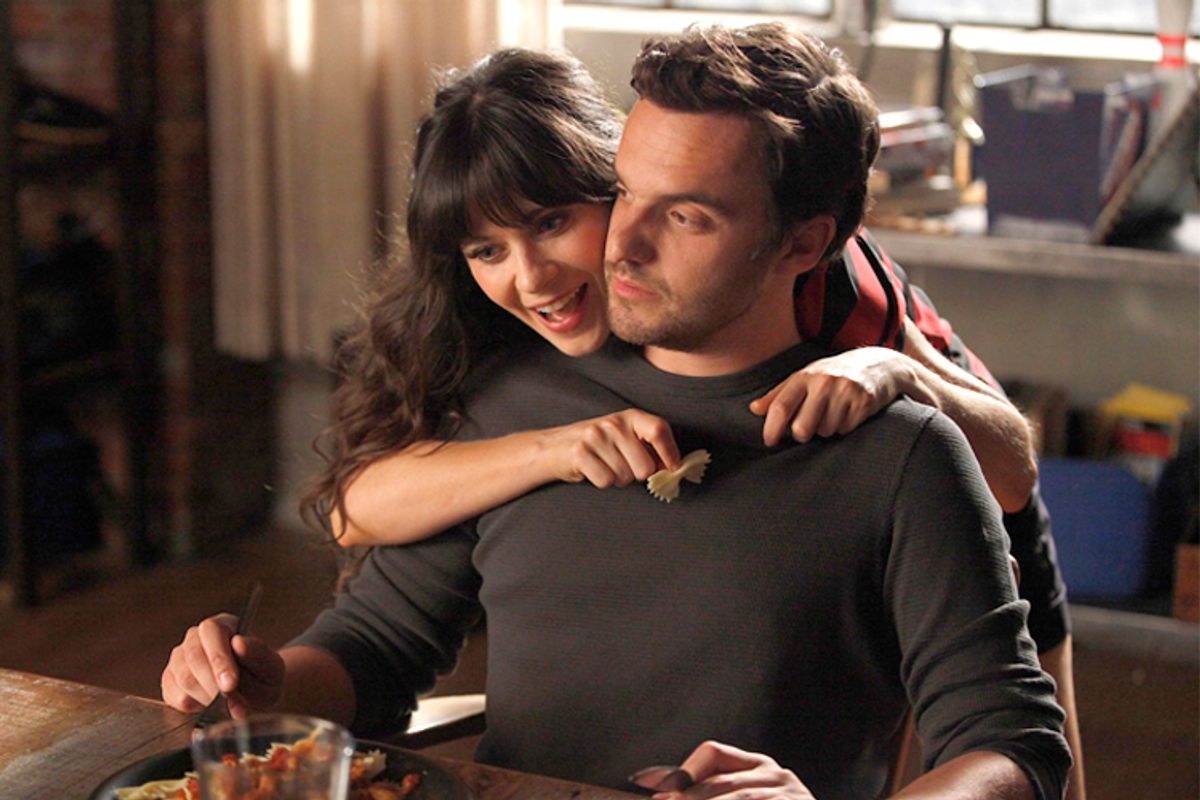 At the end of last season, Fox's "New Girl" traversed a significant milestone in the life of any scripted television show -- especially a sitcom. At long last -- though we all knew it was coming -- the hit program slammed its "will they/won't they" couple together with the promise of permanence. She's an adorkable schoolteacher. He's a scruffy, incorrigible bartender. They sparred and flirted for two seasons and finally found each other all dolled up at a wedding -- not their own, but somebody else's ethnic wedding, which is way more romantic -- and kissing passionately under the moonlight or whatever. Last night, Season 3 picked up where the finale left off, the couple in a car headed nowhere giddily declaring their mutual affection. They pull over. They have sex -- not for the first time, but the first time, like, totally on purpose. And Jess asks, anxiously, "What's next? What do we do now?"

Jess and the show's creators have every reason to be apprehensive. We've all seen many a favorite program stumble at this crossroads. Despite the crackling chemistry of its world-class leads, "Moonlighting" famously petered out upon finally putting David and Maddie together. "Frasier's" Niles and Daphne plodded along after his adulterous pursuit of her finally went legit. "Friends'" Ross and Rachel's journey ended in disappointment whether you were rooting for Joey or not. And, most recently on "How I Met Your Mother," the show runners were so hell-bent on sidestepping this pitfall (and, of course, preserving the show's titular premise) that they allowed their obvious lovebird pairing, Ted & Robin, to mutate into the painfully uninteresting Ted & Robin & Barney monstrosity.

Shows like "The Office" and "Parks and Recreation," however, have decided to ignore the obvious perils and charge forward with the belief that loves conquers all. Jim and Pam stayed together until the end -- albeit the end was imminent. "Park's" Leslie and Ben continue to push forward. Both shows confounded their couple's bliss with narrative land mines planted by their respective writers to keep the romance iffy and interesting: distance, career, past relationships, etc. On "Bones," there's a master criminal threatening to kill innocent people if Dr. Brennan and Special Agent Booth attempt to follow through with their planned marriage! At least on TV, obstacles are good for a relationship.

Here's where "New Girl" demonstrates a powerful advantage. Its lovestruck pair faces a huge obstacle in that one of them is both financially and emotionally unstable and -- quite possibly -- wholly unsuited to being in a long-term relationship. When "New Girl" began, the character of Nick Miller  (played by Jake Johnson) was the obvious romantic choice for quirky, optimistic Jessica Day (Zooey Deschanel). Sure, he was scruffy and surly and lacked ambition, self-esteem and health insurance. But opposites attract, right? And given the alternatives -- housemate Schmidt, a frenetic, pseudo-frat boy narcissist, and Winston, a blank, black cypher for whom the writers can't seem to even come up with a compelling C story -- Nick's sad-sack package seemed almost endearing.

Toward the end of the first season, though, it started to seem like the guy was headed toward some sort of a breakdown, which -- praise the writers! -- he kind of was. Jess and Nick's "will they/won't they" dance grew so much more dangerous and dramatic once it became clear that Nick was a shrill, angry commitment-phobe struggling with alcoholism and daddy issues who would rather drive aimlessly into the desert than move in with a woman as promised and whose sole life goal was ostensibly to complete a zombie novel. In this week's season opener, he decides that once in Mexico, he and Jess should never return so that they won't ever have to face the reality of their lives. Even though that reality mostly involves hanging around in the world's coolest loft drinking beer and dropping money in the "Douchebag Jar," Nick is prepared to rob, lie and kill tweens to avoid it. Seriously, he actually threatens to strangle a kid to death in this episode. I mean, is this guy a catch or what?

You can choose to look at Nick and Jess' conundrum as a commentary on our evolving relationship standards. Maybe these days, an imploding mate is considered better than none at all. I mean, it's not like Jess is so great, herself; she's so happy. Or, if you're a fan of "New Girl" -- which, by the way, I am -- you can be grateful that you have been spared the anxiety of watching these two endure a season or more of painful breakups and makeups. That's certainly going to happen. But whether it works out or not, you probably shouldn't have been rooting for them anyway. Personally, I feel like Nick Miller's the kind of guy who might actually snap and murder someone. God forbid, it be a perky brunette with big, blue eyes.