Priced out of New York

I never thought I'd leave, but the city I once loved is now unaffordable for middle-class families like mine 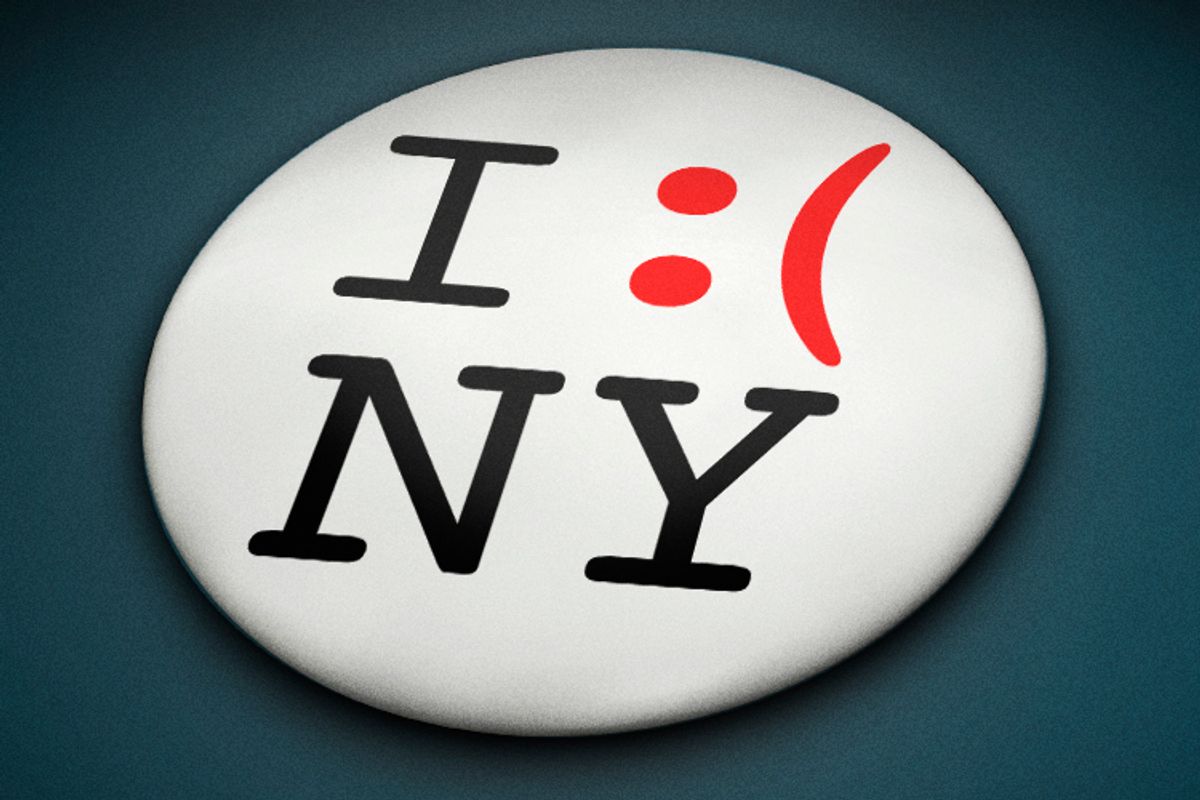 I realized I might need to leave New York when I became envious of every friend who’d managed to escape. A Swiss friend moved back to Lucerne with her American husband and New York-born child, and I found myself wishing my husband were from someplace else, so I might have an excuse to flee, as if an honorable discharge were necessary. But honorable discharge or not, we had to face facts: We had a baby now, and could no longer afford to live in the place where we’d both been born.

This was 2007, and just that week in Park Slope, parents had camped out overnight to secure spots for their children in the pre-K program they were zoned for. The schools in our Brooklyn neighborhood of Prospect Lefferts Garden were failing. We heard gunshots every night. (Shouldn’t failing schools and gunshots come with affordable housing, like in the old days?) What exactly were we struggling to hold on to? The idea of New York? Our identities as New Yorkers? What was that worth?

But we also could not imagine living elsewhere. New Yorkers don’t leave New York. It was unthinkable.

I was born on the Lower East Side in 1973 and dragged to New Jersey at age 5 when my father changed jobs. My grandparents remained in the neighborhood, as did our closest family friends, and we visited often enough that I knew what I was missing, viewing New York as my true (lost) home through the romanticized eye of the suburban kid who longed to escape New Jersey.

When I moved back to the Lower East Side — in 1991, to my college boyfriend’s apartment on E. 11th between B and C, and later to my own tiny rent-stabilized studio on St. Marks and First Ave — I returned to a neighborhood that challenged my middle-class, suburban notions of how a life is to be lived, a neighborhood that pushed me to consider my assumptions and habits, that made me uncomfortable in some very necessary ways, forcing me to think, for the first time, about race and class and privilege.

But in the time I lived there, the Lower East Side grew more and more gentrified, more and more homogeneous and unchallenging for the returning kids of the parents who’d fled for the suburbs in the '70s. It also became colder and more anonymous. My apartment building, 76 St. Marks Place, sat across the street from the building where the poet W. H. Auden had once lived. In the time I lived there, Auden’s majestic old stoop was torn down and replaced by a boxy storefront soon filled by a crappy but expensive bistro.

Our building was a small, vital community. We knew each other’s names and took care of each other’s pets and hung out on the stoop in the evenings and always, always held the door for each other because we were neighbors. As the cost of living in Manhattan rose and the turnover in our building increased, vacated apartments got bumped up to market rate and the new residents, who paid a premium for their cramped tenement spaces, didn’t learn our names, didn’t sit on the stoop, would let the door fall closed in your face.

In 1999, I got engaged (to my first husband, another story entirely). Two hundred and fifty square feet was too tight a space for two adults and two dogs, but we couldn’t afford anything bigger in Manhattan. Like many of our friends, we moved to Brooklyn. By 2001, I didn’t know anyone my own age in Manhattan anymore. I knew only those in my parents’ circle who still lived in Stuyvesant Town in their rent-controlled apartments. My friends and I leaving Manhattan for more affordable Brooklyn (in my case, Prospect Heights) drove up real estate prices there — and so gentrification crossed the river and marched eastward. You could say I’m responsible; you could say I conspired to price myself out of New York. You could say that I was a part of the very gentrification that so pains me. (Go ahead. Say it. It’s OK.)

There’s no place like New York when you’re in your 20s — or so it seems when you’re in New York in your 20s. That’s the thing about New York, isn’t it? That’s the city’s neatest trick, its most readily swallowed propaganda. (And you have to buy into it to live there, to make all the suffering seem worth it — noble even. You’re brave to struggle. You’re in New York and hell yeah, it hurts. Suck it up.) What New York does, better than most places, is convince you that it is absolutely the best place to be. The only place to be.

But then you’re in your early 30s and you’ve met someone and fallen in love, so now you’re in love with your city and with a person. (Let’s say it’s a man, because we’re going with me as an example, OK?) So let’s say you’re me and you’ve met a guy and you’ve still got your low-paying job in publishing, but now you’re in grad school full-time for your MFA as well and you’re stressed and busy and running around like a madwoman but you’re in love and you’re happy and you’ll still hustle to get the forward-facing window seat on the Manhattan-bound Q train as it crosses the bridge, just to get that glimpse of the skyline.

And then you marry that guy, and you get pregnant. Now you’ve got a kid in New York. Now what? What happens now, my friend, is you drop that low-paying publishing career because it would have scarcely covered the cost of childcare, and your husband works 14-hour days, and you stay home with your kid and stay up all night doing freelance editorial work to try to bring in some money to pick up the slack.

But the slack never really gets picked up. You’re going broke.

According to a 2013 study by the Economic Policy Institute, the average family of four needs $93K to survive modestly in New York, the biggest expenses being housing, childcare and healthcare. (That $93K does not allow for any vacations, eating out or savings, by the way.) It’s the most expensive place to live in the United States.

When my husband and I were born, it was possible to raise a family in New York without extreme struggle. It was still harder than most places, sure. New York has never been easy. But it was possible to raise a family in reasonable comfort without being a corporate lawyer or investment banker or heiress. To be a middle-class family in New York these days is to be in eternal survival mode, always scrabbling, always scraping by. What happens to a city that’s priced itself out of reach of the average family?

And so we left. We moved to Portland, Ore. We bought into that West Coast dream, backyard chickens and all.

But always in the back of my mind lies the thought that we failed. That we could have made it if only we’d fought harder to stay, struggled more, taken on more debt, more risk. There’s humiliation, in my weaker moments, when I allow it to creep in, of being one of the families that was “culled.” Who couldn’t cut it.

The thing about leaving New York is that, forever after, people will ask if you miss it. My default answer, until recently, was no. I missed the people I’d left behind — my family and friends, the people who’d known me all my life — but I didn’t miss the city. New York changed, I would say. The New York I loved no longer exists.

“Yes,” I say now. Over the years, as I’ve gone back to visit, the sting of betrayal, of having been priced out of what I thought of as my birthright — the right to always live and thrive in the place of my birth — has lessened. The anger fell away and left me with simple loss. I had been young and open and full of possibility then. Now I am older, my possibilities narrowed, my life shrunken down to the necessities of raising small children.

When I go back to visit New York I feel at home in a particular way that I know I will never feel in Portland, no matter how lovely it is and how easy a place to live it is. Yes, I miss New York. I miss New York on the level of bone and blood. I began writing this essay as an exploration of how I fell out of love with New York, and what I found in the writing of it is that I never did.

I love New York, but that love has changed. I love New York as I love the memory of an ex-boyfriend who treated me badly and then, some years later, died. Which is to say, my love is worn smooth with nostalgia, tinged with anger and a bitter sense of lost possibility.

The New York of my 20s is gone, as my 20s (and, now, 30s) are gone. Those 20-somethings living six to a room in Bushwick or whatever the hell they’re doing to get by are every bit as enamored of their version of New York as I was of mine. But I had to leave it, so I could build a life for my family.

And so I cede New York to you, broke 24-year-olds who still find validation in the struggle; and to you, obscenely wealthy bankers for whom the city’s been remade. You can have your New York. I’ll make do with the one I carry with me still. If you need me, you’ll find me, my husband, and our two kids in Portland, Ore., growing asparagus and tending our backyard chickens.

Cari Luna's debut novel "The Revolution of Every Day" has just been published by Tin House Books. Luna received an MFA in fiction from Brooklyn College. Her short fiction has appeared in failbetter, Avery Anthology, PANK, and Novembre Magazine. New York-born, she now lives in Portland, OR, with her husband, their two children, a cat and four chickens.