Jackman squares off against twitchy cop Jake Gyllenhaal in the soggy, sadistic and pretentious "Prisoners" 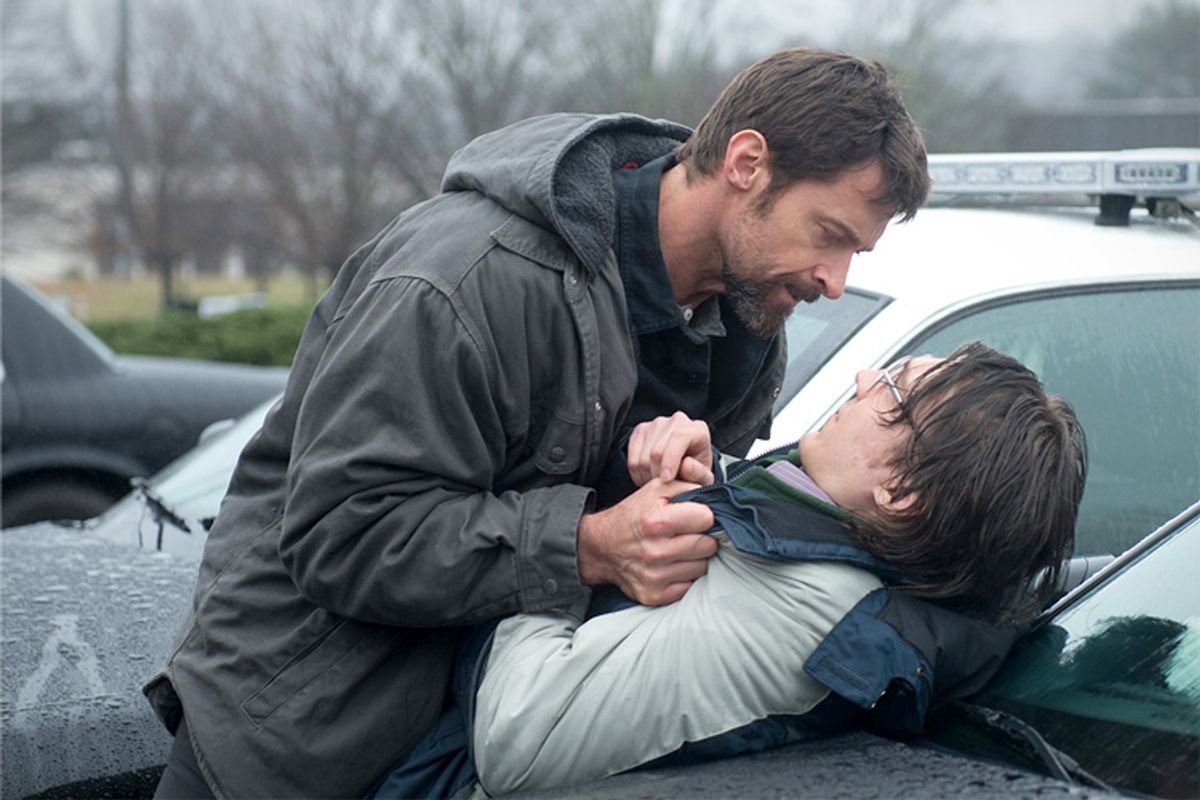 It’s pointless to complain that thrillers almost always depend on multiple overlapping unlikely events, and characters who make irrational and often stupid decisions. So what bugs me about Denis Villeneuve’s “Prisoners,” a grim, gloomy and seemingly endless new thriller that arrives with considerable hype and stars Hugh Jackman, Jake Gyllenhaal and a whole boatload of other well-known actors, isn’t exactly that. It’s more that Villeneuve, a highly regarded French-Canadian director making his Hollywood debut, tries to convince us that he’s making a serious and brooding film about the human condition or whatever, when he’s actually making classed-up, manipulative trash. (I had exactly the same reaction to his Oscar-nominated "Incendies.") Don’t get me wrong, I like trash just fine, and the twisty-loo, triple-abduction plot of “Prisoners” certainly kept me watching to the end. (You’ll figure out some of screenwriter Aaron Guzikowski’s plot twists, but not all of them.) It's the imitation-David Fincher pretentiousness that gets on my nerves.

“Prisoners” features enough grimy realism, twitchy overacting, sheets of rain and gratuitous sadism for a half-dozen or so wannabe-Oscar movies about the dark side of the American dream, the true nature of human brutality and so on. In fact, it’s a lot more like a devious mind-game being played on the audience, mixed with a condescending portrait of pill-addled, rage-addicted and permanently downscale Middle America. (We’re all prisoners, blah blah blah. Deep!) The film is set in a small city in western Pennsylvania (it was actually shot in Georgia), where the working-class families of Keller and Grace Dover (Jackman and Maria Bello) and Franklin and Nancy Birch (Terrence Howard and Viola Davis) get together for a Thanksgiving feast. During the course of the evening, the youngest daughters of both families go missing, and suspicion falls on a dilapidated R.V. seen on their suburban street earlier in the day.

Across town in a diner, the cop who catches the missing-girls case, Gyllenhaal’s Detective Loki – yeah, he’s named after the Norse god of mischief, and if he has a first name I didn’t catch it – is eating Thanksgiving dinner alone. Loki has odd tattoos on his neck and knuckles, no emotional affect and no family, slicked-back hair and a tic-laden manner that suggest he was a supporting character on either “Sons of Anarchy” or “Breaking Bad” before starting over as a cop in small-town Pennsylvania. I almost always like Gyllenhaal in everything, and he’s certainly captivating here, but as with almost everyone in this movie I can’t be sure whether this is good acting or bad acting. Either way, there’s a lot of it.

OK, I feel more confident about Hugh Jackman’s scenery-devouring performance as bearded hothead Keller Dover, whose response to his daughter’s disappearance is pitchfork-and-torches, Amurkan-movie-dad nonsense. He brings the noise and he fills up the screen every time he's on it and he's absolutely dreadful. If Loki and the other cops are too pansy-ish and obsessed with “constitutional rights” to subject every conceivable suspect to a “Zero Dark Thirty” level of torture, then by Christ Keller’s gonna do it himself, all while suffering multiple aneurysms, drinking entire bottles of whiskey without opening them (after nine years sober) and scorching the entire town to cinders with the flames shooting from his eyeballs. Maybe someone should’ve told Jackman to leave both Wolverine and Jean Valjean at home, but I’m beginning to think he only has two modes: Lovable song-and-dance man and bomb with a lit fuse. (The kind that says “BOMB” on the side, and is commonly found in the possession of Wile E. Coyote.)

See, that rundown R.V. seen on the families’ block belongs to Alex Jones -- not the conspiracy-theory, radio-host guy (although that would’ve been cool), but a stringy-haired, Coke-bottle-glasses Paul Dano character who is said to have the mental capacity of a 10-year-old. Loki, supposedly the best detective this part of the Keystone State has to offer, can get nothing out of this hapless dude, and there’s nothing suspicious in his R.V. Keller is convinced that Alex is taunting them and faking his mental deficiency, and decides to go full-bore nutjob “Oldboy”-style vigilante. Meanwhile, Loki focuses in on a completely different suspect who’s been snooping around the crime scene and buying children’s clothing in a thrift store – this part of the movie also involves suitcases full of snakes, for no particular reason – and also encounters an elderly priest who claims to have a dead serial killer in the basement.

So not only do we get a stranger abduction – an exceedingly rare crime – but a two-child stranger abduction, followed by one of the parents committing a crime that’s almost as bad followed by a possible copycat crime, surrounded by a general atmosphere of 1990s-style child-abuse paranoia and followed by … well, I’ll stop there. In fairness, screenwriter Guzikowski does a halfway satisfactory job of making this all stick together in the end, and as I said earlier there’s at least one big reversal you won’t see coming (partly because it’s barely credible, at best). There are some clues along the way that arguably don’t fit the hastily revealed final solution – or at least I think there are. Over the course of 153 battering minutes, far too many of them spent in the company of Jackman’s character making laughably bad decisions and yelling at everyone, it’s entirely possible that I drifted away mentally and missed something. I kept watching for Gyllenhaal and because I wanted to see how it would all work out and because Roger Deakins is the cinematographer and the rain-sodden gloomscapes look great. “Prisoners” is compelling in a profoundly unpleasant way, while you’re watching it. But it doesn’t mean anything or have anything to say, and as soon as it’s over it’s gone.