Think human males and females are so distinct? Look at lions, cardinals, anglerfish and elephant seals! 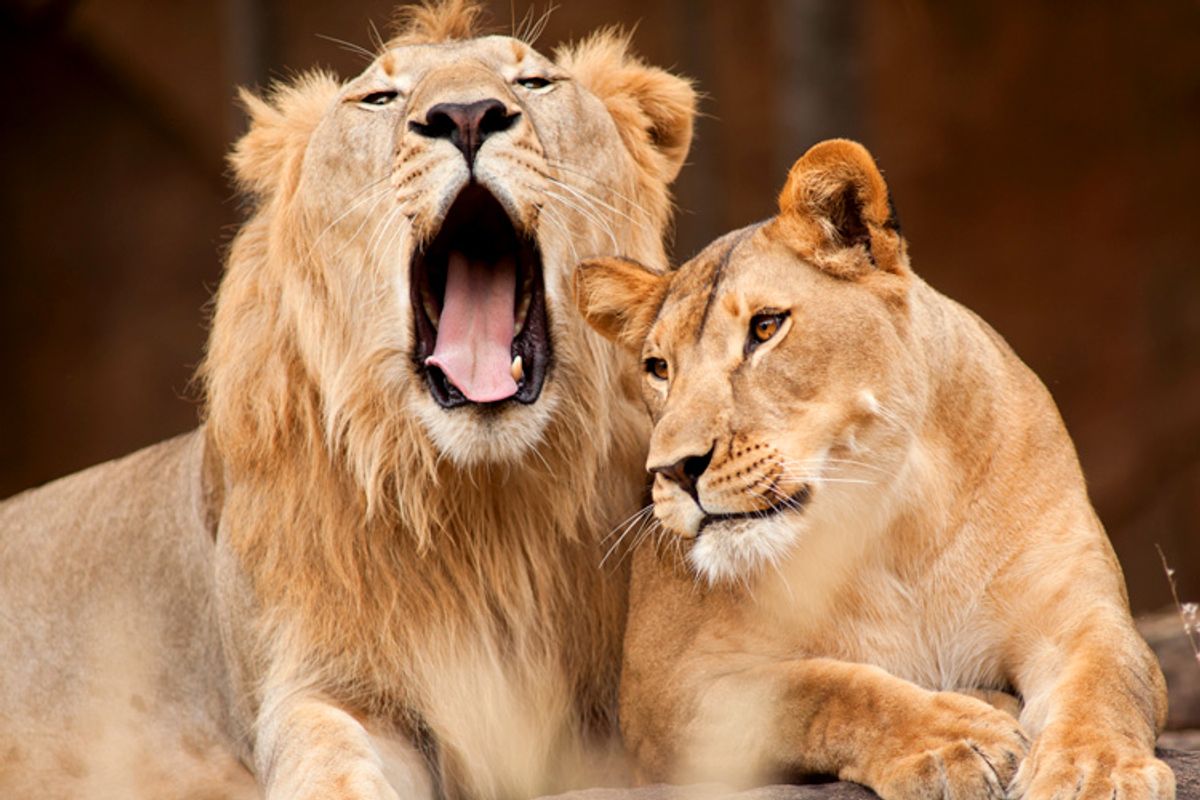 Somewhere in the deep, dark depths of the ocean a male anglerfish is hungry. He lacks the artificial, bioluminescent lure that females use to attract prey. This is a rather insignificant problem compared to the fact that he is incapable of digesting food. The only bite he’ll ever take will be a love bite. He’ll latch on to a female anglerfish with his teeth, triggering a chemical reaction that will dissolve his face, fusing it permanently. Eventually he’ll lose every organ in his body to this process, except his testicles. Those will stick around, literally. A happy female anglerfish will be dotted with pairs of balls. They are safe deposit boxes of sperm that she draws on at will.

This is sexual dimorphism. The phrase refers to the degree to which males and females of a species differ. Anglerfish are obviously strongly dimorphic. Other animals are less so. Males and females of some species, like the ring-necked dove, are almost impossible to tell apart. In the big scheme of things, humans are more like the ring-necked dove than the anglerfish, and that is a really important fact that we seem hell-bent on ignoring.

Instead, we obsess over gender differences. We search for them in scientific studies, scour religious texts for hints from a higher power, and extrapolate from the behavior of our friends and loved ones. We write and read a seemingly endless stream of books counting and discounting the evidence. We argue over whether the differences we think we see are caused by nature or nurture.

When it all comes down to it, though, how much difference are we talking about? Let’s put it in perspective.

If we were as sexually dimorphic as the blanket octopus, men would be 0.8% the size of a female, or about the size of a walnut. If we were green spoonworms, the average human male would be less than an inch tall. He would live his entire life on his five-foot three-inch human mate -- unless she accidentally ate him. Luckily, he could then live out a full life inside her digestive tract.

If we were as sexually dimorphic as the Alaskan moose, men would walk around with antlers four-and-a-half feet wide, but only during mating season. If human males were like the rhinoceros beetle, they would sport a single horn that protruded almost four feet forward. That might be inconvenient.

It would be lovely, though, if men carried lustrous manes like male lions or were covered in iridescent skin cells that gave their body a glossy shimmer that changed colors as they turned in the light, as many birds do. It might be quite pretty if they preened 11-foot tails that tripled their body length, like the resplendent quetzal; even better if they could advertise their romantic interest with a display like the peacock. I wouldn’t mind.

Nor would I complain about being drab if the boys came in dramatic colors. If we were as sexually dimorphic as Northern cardinals, men would be bright red with a black mask around their eyes and throat and women would look pretty much as they do now. But we don’t have to let the boys be the pretty ones. We could be like eclectus parrots: boys in bright green and blue and girls in purple and red.

Then again, some sorts of sexual dimorphism are less appetizing. If we were as sexually dimorphic as orangutans, males would be distinguished from females by large, fatty cheek flaps that went from temple to chin. If we were like the proboscis monkey, a guy would have a rather massive bulbous nose that started between his eyes and hung several inches below his mouth. If we took after the platypus, men would be poisonous but women would not. Males would have a spur on their foot that could inject venom. Luckily for the ladies, they would probably only use it on each other; it appears to be mostly a way to compete for females during breeding season.

As Dorothy Sayers once said: “women are more like men than anything else in the world.” Yes, we’re different. We reproduce sexually, so we do come in (with some exceptions) two types: one that potentially gestates, births and feeds new life and one that can mix up the genes of our species. Most men don’t have a uterus and most women will never inseminate anyone. That’s a fact of life.

But we’re not that different. We’re just not that kind of species. It’s kind of amazing when you think about it. We face a great deal of pressure to be different. We live in a world in which “men are from Mars and women are from Venus” is a household phrase and a publishing empire. Despite these influences, scholars find either no difference or only very small differences on 78% of traits, abilities, interests, attitudes and behaviors. As communications scholar Kathryn Dindia once put it, it’d be more correct to say “Men are from North Dakota, women are from South Dakota.” We are alike despite ourselves.

I call for a more reasoned conversation. “Opposite sexes” is obviously a misnomer. The phrase suggests that men and women are fundamentally dissimilar, with contrasting strengths and weaknesses. In fact, if we have to choose between arguing that we are exactly the same and totally different, we have to go with the former. We are much more alike than we are different. Instead of plowing forward with the differences debate, I’d like to see us give more ink to our similarities and spend more energy appreciating just how much we have in common.