6 things you need to know about Janet Yellen

She may soon be the most powerful economist in the world 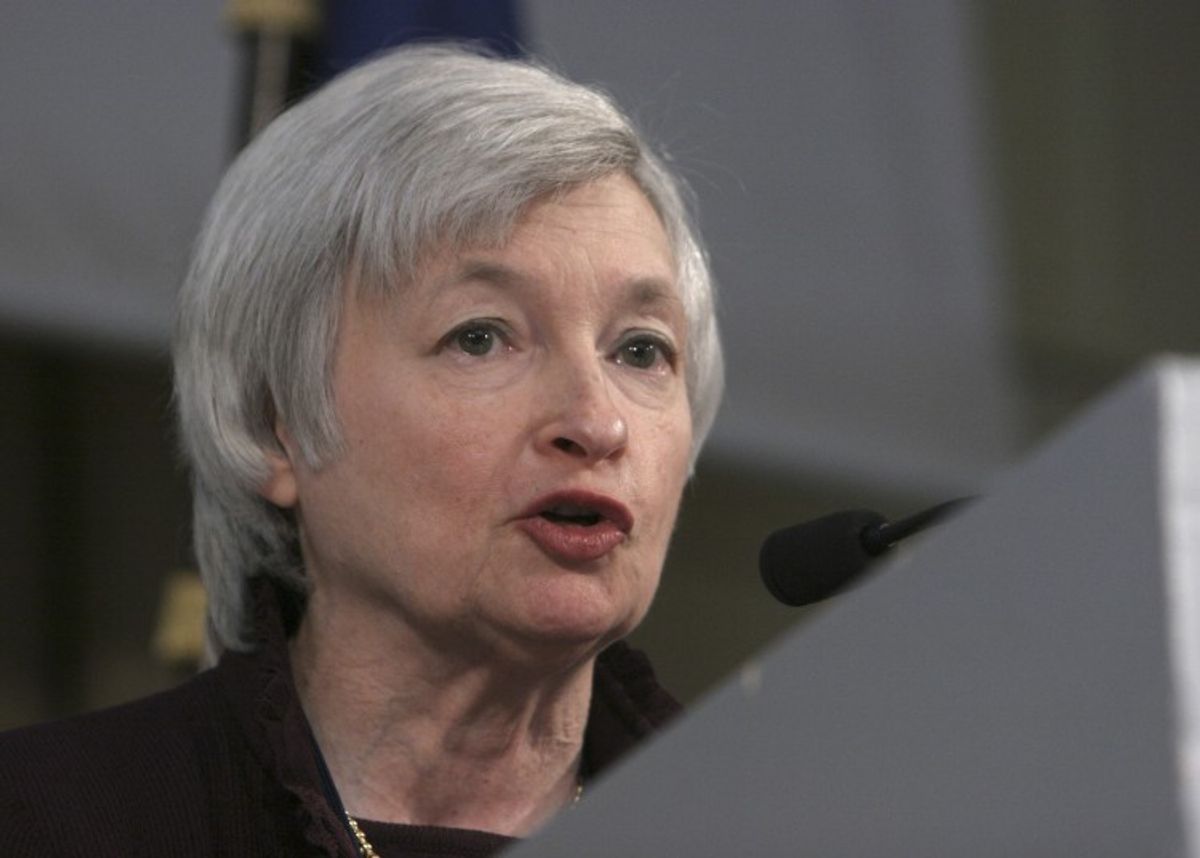 With Larry Summers knocked out of the running for Federal Reserve chair, attention has turned to Janet Yellen, considered his main rival for the job. So far, what most Americans know about her is that she is not Larry Summers, which is no small point. Summers is a crony capitalist with strong ties to Wall Street, a history of poor judgment and multiple conflicts of interest that make him uniquely unsuited to lead the Fed. That he will not should be a relief to all.

But who is Yellen in her own right? Let’s take a look at the woman who could end up becoming the most powerful economist on the planet.

1. Yellen has an impressive resume.

Janet Yellen grew up in Brooklyn, where her dad was a doctor. She got a bachelor's degree in economics from Brown University, followed by a Ph.D. in economics from Yale University where she studied with Nobel laureate and progressive icon Joseph Stiglitz. Her professor recently praised her in a New York Times op-ed, “Why Janet Yellen, Not Larry Summers, Should Lead the Fed” as “one of the best students I have had, in 47 years of teaching at Columbia, Princeton, Stanford, Yale, M.I.T. and Oxford.”

Yellen has taught at Harvard (1971-'76) and the London School of Economics and Political Science (1978-'80). Since 1980, she has been a faculty member at Berkeley. As a scholar, Yellen has written on a wide spectrum of macroeconomic topics, but her specialty is the causes, mechanisms and implications of unemployment.

She joined the Federal Reserve board of governors in 1994, where, as a little-known economist, she talked down Alan Greenspan in a July 1996 meeting, arguing the Keynesian view that a little inflation would soften the blow of recessions and make them less severe. That would not be the last time she challenged a man whose views were often accepted unquestioningly by people across the political spectrum.

In Feburary 1997, Yellen succeeded Stigltiz as chair of the President’s Council of Economic Advisers under Clinton, where she served until August 1999. Later, she became president of the Federal Reserve Bank of San Francisco, from 2004-2010. In April 2010 she took over the Fed’s #2 slot as vice-chair.

A 67-year-old woman with snow-white hair and a cheerful demeanor, Yellen has kept a low profile, but interviews reveal a personality that is accessible and likable. When she joined the board of the Federal Reserve governors in 1994, for example, she raised eyebrows by eating in the cafeteria along with regular staff. She is married to progressive economist and Nobel laureate George Akerlof, who teaches at Berkeley and is famous for his contemptuous view of the neoclassical “rational markets” myth. (His most famous paper is “Market for Lemons,” which explains how consumers get screwed in the marketplace) As progressive economist Paul Davidson recently pointed out, Yellen shares many of her husband’s views and often collaborates with him on research papers. She and her husband are avid stamp collectors, and apparently like to get nerdy by bringing along a suitcase full of economic books on beach vacations with their son Robert.

2. She has an independent streak.

Yellen’s stint in the Clinton administration has recently come under scrutiny, and that’s as it should be. Huffington Post’s Zach Carter revisited her 1997 Senate confirmation hearings and noted that at the time, she supported the repeal of Glass-Steagall, NAFTA and chained-CPI, an adjustment to the calculation of Social Security payments that amounts to a cut. It is true that Yellen supported the positions of the Clinton administrations at the time, and many of these positions are understandably unsettling to progressives. However, one has to look at the context and compare Yellen’s relatively tepid endorsement of deregulation to the relentless cheerleading of someone like Summers. In an email to me, Dean Baker explained:

“Summers was very vociferous in pushing deregulation. He put down people who raised questions about deregulation as financial luddites. This was a big project for him. Yellen went along with the deregulation because that was the fashion in economics at the time. There is no evidence that she had a principled commitment to deregulation. This doesn't mean that we can count on Yellen to be an aggressive regulator but the odds are certainly better than when you put someone there who was a leading proponent of deregulation.”

Even during the Clinton days Yellen showed signs of prescience and an independent streak. In 1998, she testified in a hearing before the Senate Judiciary Committee on the wave of corporate mega-mergers and acquisitions that were sweeping over the economy like wildfire, giving rise to Franken-companies that crushed competition and produced monopoly conditions. (I have written about how this has played out in the banking industry and it isn’t pretty.) A laissez-faire economist like Greenspan would have insisted that the government had no business getting involved. And that’s just what the then-Fed chair did at this particular meeting: “Bigness per se,” said Greenspan, “does not appear to be an issue of national economic policy.” Simply trust the markets to straighten everything out, Greenspan suggested: “Adam Smith’s invisible hand does apparently work.”

Yellen, in contrast to Greenspan, sounded a more cautionary note, casting doubt on claims that mergers result in efficiency, as executives claimed: “An increase in shareholder value,” said Yellen, “can arise for reasons other than greater efficiency, such as increased power and the resulting ability to increase profits by raising prices.” At that time, when “Maestro” Greenspan’s views about market efficiency were gospel, this was politely expressed heresy. Yellen further noted that many mergers actually decrease efficiency and warned that mergers undertaken to increase market power and concentration would hurt consumers, squelch innovation, and decrease future competition.

At the height of free market fever, Yellen was on record as not buying the “anything goes” mentality touted by Greenspan. This point has not been sufficiently understood.

More recently, Yellen was not part of the bank-centric Summers/Geithner boys’ club which made calls in Washington when the economy went into freefall in 2008. In sharp contrast to Fed Chair Bernanke’s recurrent happy talk about “green shoots,” she warned steadily that we were not out of the woods, stating in a 2009 speech that "the pace of the recovery will be frustratingly slow." It must also be said that Yellen has not been lining her pockets, like Larry Summers, with lucrative Wall Street consulting gigs, making her free of the conflicts of interest that plagued her rival.

3. Her forecasting ability is renowned.

Yellen supported some positions during the Clinton administration that reflected the tenor of the times, but there is evidence her thinking has evolved over the years. That evolution can be seen most clearly in the way she has gone about making economic forecasts. As Joseph Stiglitz has argued, Yellen’s forecasting record on the economy is “superb.” According to the Wall Street Journal, it is the best of anyone at the Fed.

Again and again, Yellen has diverged from people who told us that the economy would be just fine. She has shown skepticism that things would work out the way Bernanke and officials at the Treasury said it would, and that reflects Yellen’s rethink on how the economy works. At the San Francisco Fed,where she was highly respected as a bank regulator, she was one of the few to sound the alarm on the risks of subprime mortgages in June 2007:

‘‘I still feel the presence of a 600-pound gorilla in the room and that is the housing sector. The risk for further significant deterioration in the housing market, with house prices falling and mortgage delinquencies rising further, causes me appreciable angst.’’

Now we all know she was right.

As we’ve seen from the Great Recession, economic crises exact a terrible toll on ordinary people. The evidence suggests that Yellen would have a better chance of seeing them coming and heading them off than her rivals.

4. She cares about unemployment.

Americans crushed by layoffs and job insecurity will like the fact that Yellen’s academic expertise is in unemployment. As a former academic, I can attest to the fact that your specialty is the thing you are most passionate about, the topic that rouses you from bed and drives you to endure late nights at the library and eye-strain wading through research papers. In a recent conference co-sponsored by the AFL-CIO, Yellen described her passion for the subject in remarks about the jobs crisis quoted in Bloomberg: “These are not just statistics to me…The toll is simply terrible on the mental and physical health of [jobless] workers, on their marriages, and on their children.”

Yellen has been described as a “dove,” meaning she views keeping employment numbers high as a priority and does not focus solely on inflation, like a more Wall Street-oriented economist would do. She is more concerned with unemployment than fighting asset bubbles. If she becomes Fed chair, we can expect her to focus on driving down unemployment, currently at 7.3 per cent, and keeping interest rates low, as she indicated in the spring of 2013. In her words, “I believe it's appropriate for progress in the labor market to take center stage in the conduct of monetary policy.”

5. She has the right management skills.

Yellen is described by people who have worked with her as a cool head who prepares carefully ahead of time rather than making decisions on the fly. Stiglitz emphasized that she is someone who has the gravitas requisite for a job as important as Fed chair.

Larry Summers has enjoyed an inflated reputation as a thinker, but his reputation as a person who does not play well with others or consider advice is certainly deserved. Yellen, on the other hand, is both thinker and listener. As Stigltiz put it, “she is an economist of great intellect, with a strong ability to forge consensus.”

Stephen Hoffman, chief banking regulator when Yellen was president of the San Francisco Fed, praised her as someone who does not micromanage: “You knew your role and responsibilities, and she backed you,” he said. Yellen is also known for being respectful to those who disagree with her and maintaining a collegial environment. All of these skills are tremendously important at the Fed.

6. Yellen is the most qualified.

Among the names that have been floated—Fed former #2 Donald Kohn, Timothy Geithner and TIAA-CREF president Roger Ferguson —Yellen, in the words of Sen. Elizabeth Warren, is plainly “the best person for this job.”

If she gets the position, Yellen would break the glass ceiling at the Fed, becoming the first woman to head it. The gender issue has become significant in the run-up to the nomination, with sexist whisper-campaigns launched against Yellen that have angered women’s groups. Lael Brainard, the Under Secretary of the Treasury for International Affairs under Obama, is the only other female whose name has been mentioned, a dark horse candidate who is thought to be close to Geithner.

It would be difficult to overstate the importance of the President’s choice for the next head of the Federal Reserve. This person will have the power to shape monetary policy in the $17 trillion U.S. economy and guide the country at a time when inequality is at record-breaking levels and the 99% have not recovered from the Great Recession.

Yellen alone has inspired the endorsements of New York Times columnist Paul Krugman, former FDIC chair and UMass-Amherst professor Sheila Bair, the National Organization for Women, and a star-studded list of nearly 500 economists who wrote a letter to Obama praising her. Sen. Charles Schumer (N.Y.), the third-ranking member of the Democratic leadership, has just announced his endorsement.

Yellen may not be a perfect candidate, but she is a person of enormous ability and boasts the best qualifications of any serious contender. She takes us from the foregone conclusions of a Rubinite world to the possibilities of a future than can be shaped with more of an emphasis on fairness and the needs of working people.