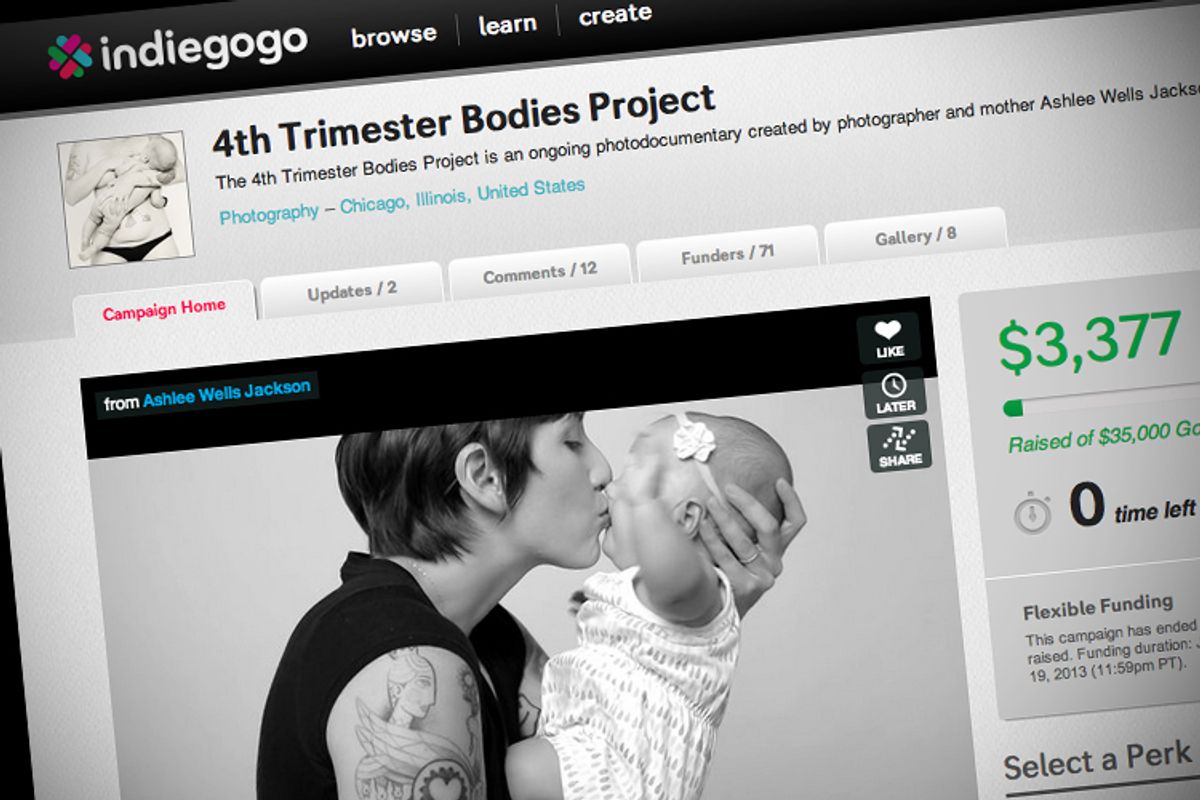 The Huffington Post is so big, it can now successfully subvert itself. Case in point – its current most popular story is about the 4th Trimester Body Project, dedicated to busting "unrealistic expectations" and the "supremely sexualized" media obsession with the postpartum female form. Unrealistic, sexualized expectations that sites like, oh, I don't know, maybe HuffPo so slavishly trade in?

Photographer and mother Ashlee Wells Jackson's project is a loving array of black and white photos of moms, clad in black underwear and often holding, sometimes nursing, their naked babies. (One moving image depicts a mother whose daughter was "born sleeping," holding a photo of the baby.) The photos are exuberant and diverse, showcasing an array of body types from slim to large, taut to gently saggy. As Wells told HuffPo, "I see beautiful, inspiring, real women on a daily basis who struggle with their body image because they don’t feel they measure up with who the media tells them to be."

4th Trimester isn't the only project of its kind -- Shape of a Mother has been rocking on for seven years – but its uniquely artistic vision makes it lovely and noteworthy. And to be fair to HuffPo, it does regularly challenge conventional thinking on mothers' bodies. Last year, Allison Tate went viral with her declaration that though "I'm still carrying a fair amount of baby weight and wearing a nursing bra, and I don't fit into my cute clothes," she wants to make sure she remains a visible presence in her children's lives and their photographs.

But let us not forget that HuffPo is also the site that declared this summer, less than one day after the royal birth, that "Kate Middleton Debuts Post-Baby Body." Naturally, there is a whole vertical for Kate's "post baby body," as there is for Kim Kardashian's. HuffPo would like you to see how Uma Thurman "wows" in a post-baby bikini. It gushes that "Malin Akerman's Bikini Body Is Flawless 3 Months After Giving Birth." It notes that "Holly Madison Flaunts Svelte Post-Baby Body In Two Mini Dresses." And here's a slideshow of celebrities who look "amazing"  and are "back to looking their best." In fact, if you search HuffPo for the word "flaunts," you will get nearly 19,000 results, most of which are connected with either "baby bump" or "post-baby." So while it's grand that HuffPo is giving attention to realistic depictions and motherhood, let's note it's also a chief offender in the cult of skinny, sexy MILF-oriented crapola as well. And in revealing women's bodies, it showcases its own hypocrisy best of all.