"If someone wants to assassinate me, they're going to find a way"

An abortion provider featured in "After Tiller" talks to Salon about the danger, and meaning, of her work 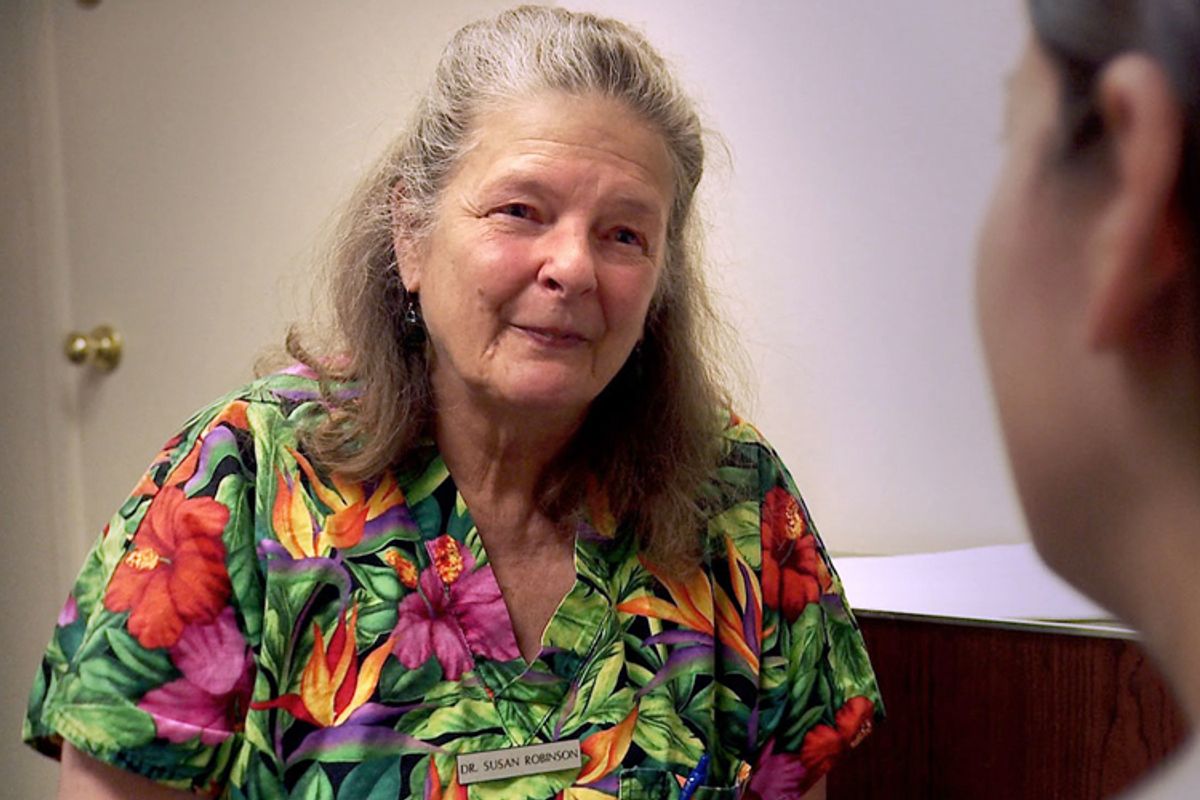 Dr. Susan Robinson in "After Tiller"
--

"You can look or you can not look," the doctor says to the woman. "You can see what you want to see." There is a sonogram nearby. The woman is about to have a third trimester abortion. The woman begins to cry.

This is perhaps not how you'd expect one of the most powerful, rational films on the highly charged subject of reproductive choice to begin. But "After Tiller" is utterly unlike anything that's come before it. "We wanted that opening scene to be completely ambiguous," the film's co-director, writer and producer Lana Wilson told Salon on a recent sunny September morning. "All you know is she's sobbing and it's wrenching. We wanted to start with that frame in mind." And from there, things only get more intense.

In the aftermath of the 2009 murder of Dr. George Tiller, filmmakers Martha Shane and Lana Wilson set out to tell the story of the four remaining late-term abortion doctors in the country: Dr. LeRoy Carhart, Dr. Warren Hern, Dr. Susan Robinson and Dr. Shelley Sella. What they ultimately achieved, however, isn't just a portrait of physicians who've spent their entire careers in the cross hairs -- and the reasons they do the difficult to comprehend job of ending third trimester pregnancies. It's also a story of the women who make that choice, and an emotional, intelligent plea for compassion and tolerance on all sides of one of the most divisive issues in the world right now.

Though late-term procedures make up only 1 percent of all abortions, they occupy an enormous amount of the attention and debate around reproductive choice. Even people who are pro-choice have difficulty accepting the idea of late-term abortion – only 10 percent of all Americans support it, and 41 states ban abortion at what is deemed "fetal viability."

But as "After Tiller" shows, late abortion isn't a matter that can be sloganeered away by a protester's sign or a politician's sound bite. And the stakes are life and death – for both the patients and the doctors. Dr. Carhart has been targeted by arsonists who killed 17 of his horses. Dr. Hern has had shots fired into his office. All four doctors – as well as, often, their families -- have experienced threats and harassment. Dr. Robinson tells Salon, "If someone wants to assassinate me, they're going to find a way to assassinate me. Dr. Tiller was absolutely protected except when he was in church -- so they went and shot him when he was in church. I accept that and I don't worry about that. But it's so heartless to have the patients who come in, having struggled with the decision, not wanting to be there, not wanting to have an abortion, but feeling it's the best thing for them and their families, and then they're in tears because the protesters have been screaming at them." The personal toll on the doctors, the battle just to keep doing their work, is acute and ongoing. Yet as the filmmakers portray them, the doctors are all deeply committed to their profession, even as they continually grapple with whether or not to accept each patient. As filmmaker Martha Shane tells Salon, "They have to be a counselor and a support system as well as a technician. It's so unusual to get that level of care in this country."

As "After Tiller" unspools, it crosscuts the stories of the doctors – some of whom have seen with their own eyes the deadly ravages of illegal abortion and all of whom share a passion for women's welfare – with the anonymous women who require their services. There are heartbroken women, clutching their husbands' hands, whose babies have fatal fetal conditions. Women who've given those babies names, and speak tearfully of how they've prayed about their decisions. Women for whom abortion isn't something better access to birth control would ever have prevented, because they planned and wanted those pregnancies. There is a young woman who's been sexually assaulted, who admits she "didn't want to face reality." There's a teenager whose deep religious convictions kept her avoiding a choice until a choice had to be made. Women on the brink of destitution, who had to save for months to afford the procedure. "We began with what we thought were the most easy to understand cases, the most severe fetal anomalies," explains Wilson. "Then as the movie progresses the cases get more challenging and more gray, ending with a 16-year-old girl who people are going to be really pushed to think about it. There are sometimes parts of the pro-choice movement that don't want to talk about how this can be wrenching and devastating and sad. But as the doctors say in the film, you can have compassion for why someone made this choice."

It is tough, difficult stuff, because late abortion is tough, difficult stuff. It is a four-day procedure in which the fetus is, as Wilson explains, euthanized, and then delivered. It is a process that comes with much conversation and counseling and, in some circumstances, a memory box for the parents to take home with them. At one point in the film, Sella, who admits "I've struggled because I think of them as babies," explains simply, "You have to think about it."

Thinking about tough issues rarely leads to easy, entirely satisfying conclusions. And as the filmmakers sensitively demonstrate, there is ample difference between having to make decisions you grieve and making decisions you regret. At one point, Dr. Susan Robinson tells a patient bluntly, "You have choices. They all suck."

In the film, Robinson comes off as simultaneously briskly no-nonsense and expansively warm. In person, she seems much the same, but to an even larger degree. When she speaks, she gazes at you intently, and the words she says are powered by years of firsthand experience. "Women can wrestle with complex ethical issues," she says authoritatively. "Do people think that they don't know what they're doing? How stupid do people think women are? It makes the hair on the back on my neck prickle when I think of how insulting this whole antiabortion stance is. It's basically, 'You, honey, are not a big enough girl to make a decision like this. You need all of these rich, fat white men to do for you.' What do people think abortion is? Do they think women are waltzing down the street on the way to the supermarket and they see an abortion clinic, and it's clean and it looks nice and they think, 'Hey there's an idea. I'm going to have an abortion! That sounds like fun!' or, 'I’m going to get pregnant to see what it's like to have an abortion!' No. The one thing every woman has in common in that clinic is that they never thought they'd be there and they wish there weren't there."

In a country where it's easier to scream across dividing lines than take the emotional risk of empathy, "After Tiller" may ultimately not change too many already made-up minds. But wherever you stand on the subject, it's utterly essential in illuminating the morally complicated, often-unexplained facts surrounding it. You want to have an opinion about late-term abortion? Have a basic comprehension of it first. Robinson says, "All I want is for people to understand that this is a complex issue. This is not done casually. It's done because we feel we can help each patient, and that's a huge privilege for a doctor." You can look or you can not look. Look.

"After Tiller" opens in New York on Sept. 20, and selected cities nationwide in October.