"Ender's Game" essentially argues that mass killing can be not just good, but almost holy 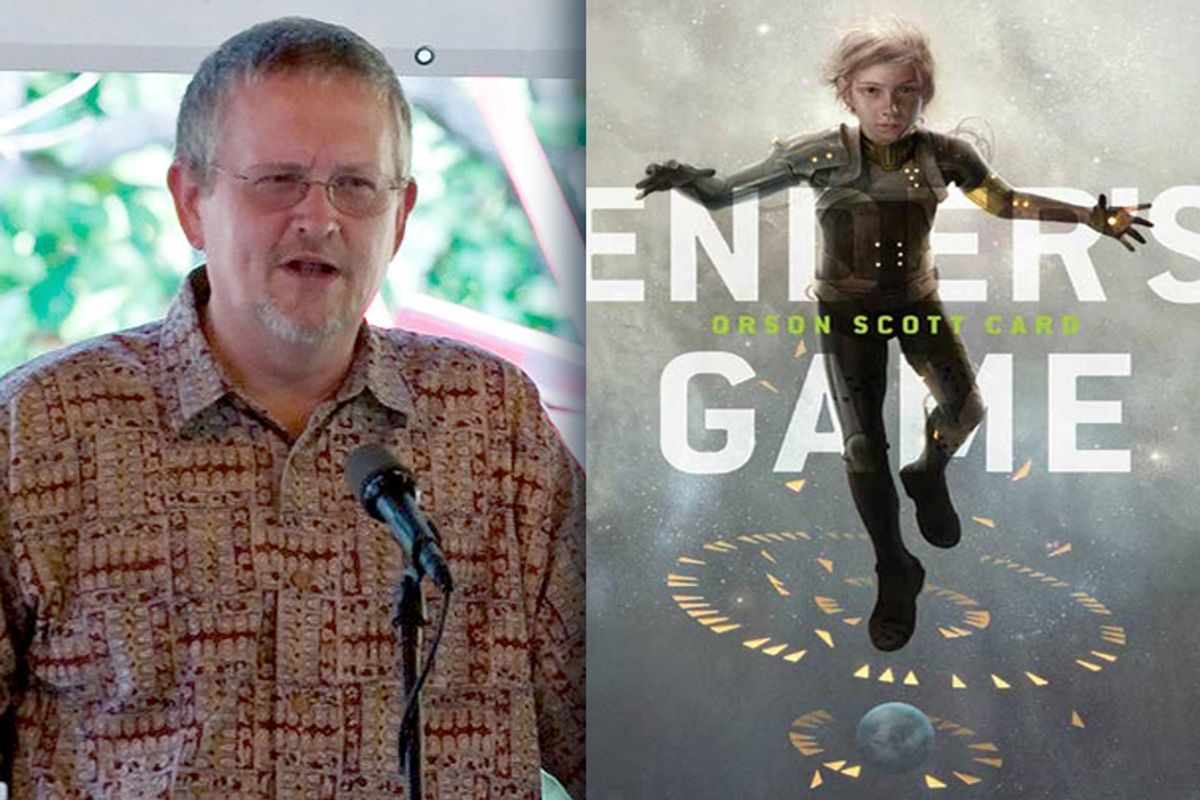 Genocide is popular entertainment. People love narratives in which a dehumanized, absolutely evil enemy — whether it's vampires, zombies, aliens or orcs — is systematically slaughtered by the forces of righteousness.

Orson Scott Card's 1985 novel "Ender's Game" — a film version of which is to be released in November — is no surprise in this regard. The plot centers on earth's efforts to defend itself from an alien race of "bugs," a deadly, implacable enemy that must be destroyed utterly. Where most such fantasies are content to simply posit the other as evil and get on with the gleeful destruction, though, "Ender's Game" is different. Card takes the moral implications of genocide seriously. His book, therefore, is not merely an exercise in empty-headed, cathartic violence. It's a careful, eloquent and impassioned brief for the virtue and beauty of mass murder.

Card's defense of genocide has several levels. The most explicit is also the most familiar — basic pragmatism and self-defense. "[I]f you can't kill then you are always subject to those who can, and nothing and no one will ever save you," Ender, the military genius child protagonist thinks at one point, and the novel repeatedly and carefully validates this insight. On the personal level, Ender is subject to dangerous bullying, to which he responds with deadly force. The force is presented as absolutely justified; if confronted with violence you must respond with violence. And that equation applies in international (or, in this case, intergalactic) relations as well as personal ones.  As his handler Colonel Graff tells Ender:

Graff blames violence on "genes." He conflates evolutionary psychology just-so stories both with science and with common sense, so that genocide becomes not merely a moral choice but a biological necessity. You need to murder millions the way you need to defecate.  Birds do it, bees do it, and if they don't, what's wrong with them?

Again, though the reasoning here is more explicit, this isn't out of line with the way most pop narratives treat genocide. Killing orcs or vampires or zombies is natural; you do it because if you don't, they'll kill you, and also because they are evil, antagonistic creatures that any moral, natural human being would want to kill.

"Ender's Game" separates itself from other genocide narratives, though, because it in many ways presents these justifications as insufficient. At the end of the book, it is revealed that the bugs were not actually out to kill humans; the first two invasions of earth, and the murders that resulted, were the result of a failure of communication. The bugs didn't realize they were killing sentient creatures. The earth attack on the bugger homeworld, and the subsequent genocide, were therefore unnecessary.   Genes and/or paranoia led humankind to perpetrate an unprovoked, massive slaughter dwarfing the Holocaust by several orders of magnitude.

For many writers — like, say, Joe Haldeman —"Ender's Game" would, therefore, be an anti-war parable. After all, it's a story that shows the cruelty, the stupidity, and the ultimate pointlessness of war. The case seems open and shut.

Card's justification of the destruction of the buggers is twofold. First, he carefully constructs the story so that the genocide is innocent; no one is responsible for it. Ender, who remotely commands the human invasion fleet, is eleven years old, and his subcommanders are all also children. Card provides a couple of reasons for this. There's some suggestion that the individuals who are the best fighters (like Ender) just happen not to be fully grown up yet. Graff also argues that children are more adaptable and quicker to follow orders — which is, in fact,  one reason that real armies have sometimes used real child soldiers, though Card does not mention the historical precedents.

Beyond this, though, the thematic reason that Card uses children is clear: they aren't morally culpable.  The genocide, therefore, is performed by innocents. Card tilts the scale further; not only are the children innocent by virtue of being children, but they don't even know what they're doing. Ender does not realize that he is commanding an invasion fleet; instead, he believes that he is playing a computer simulation (thus the title, "Ender's Game"). After he unleashes a futuristic weapon of mass destruction on the bugger homeworld, reducing it to slag, one of the adult onlookers enthuses, "You made the hard choice boy. End them or end us." The fact that Ender didn't realize he was making that choice, and didn't know he was killing anyone, doesn't render his choice ethically moot for Card. Rather, it makes the choice all the more moral. The decision for genocide is made by an ignorant innocent, free of all constraint; it is genocide as pure choice, outside the ethical — and therefore in some sense transcendentally ethical.

Card underlines his equation of morality and genocide in a remarkable passage following Ender's victory, in which Colonel Graff explains why the military  deceived Ender:

"That's the whole point," said Graff. "It had to be a trick or you couldn't have done it. It's the bind we were in. We had to have a commander with so much empathy that he would think like the buggers, understand them and anticipate them. So much compassion that he could win the love of his underlings and work with them like a perfect machine, as perfect as the buggers. But somebody with that much compassion could never be the killer we needed. Could never go into battle willing to win at all cost. If you knew, you couldn't do it. If you were the kind of person who would do it even if you knew, you could never have understood the buggers well enough."

Obviously, there's a lot about this that is just silly. The great generals of history were not necessarily known for their feats of inhuman empathy. War criminals like Genghis Kahn and Henry Kissinger are not generally celebrated for their compassion. Every war in human history provides evidence that you don't need to love your enemies to kill them.

You might think that we're not supposed to believe Graff. He's a monster in many respects, after all; he recruited child soldiers, and then egged them on to genocide. But Card takes care to exonerate Graff — quite literally. The Colonel is placed on trial for war crimes, and declared innocent. "We got the judges to agree that the prosecution had to prove beyond doubt that Ender would have won the war without the training we gave him," Graff crows after his acquittal. Ends justify means; Graff's righteousness and morality are validated by his victory. And that means his reasoning — his equation of genocide and empathy — is also validated. We're supposed to see it as wisdom.

…we ask only this: that you remember us, not as enemies, but as tragic sisters, changed into a foul shape by fate or God or evolution. If we had kissed, it would have been the miracle to make us human in each other's eyes. Instead we killed each other. But still we welcome you now as guestfriends. Come into our home, daughters of Earth; dwell in our tunnels, harvest our fields; what we cannot do, you are now our hands to do for us. Blossom, trees; ripen, fields; be warm for them, suns; be fertile for them, planets; they are our adopted daughters, and they have come home.

That's probably the loveliest passage in the book; it made me tear up. But while it is, in some sense, a plea for peace, acceptance and forgiveness, it is also a kind of final, irrefutable defense of genocide. Even those murdered recognize that they had to be wiped out. Even the victims recognize the justice of WMD, mass murder and imperial occupation. And even those he killed — especially those he killed — love the guy who massacred them. And they love him not despite the massacre, but because of it; we are told that it is because he was the one fighting them that they knew him and grew close to him. Even as they choose nonviolence, even as they forswear revenge, the bugs venerate violence and those who wield it. Murder is empathy, and therefore the murderer is a kind of holy man. And, indeed, Ender goes on to write a sympathetic book about the buggers that becomes the basis for a religion.

In an interview with me, pacifist theologian Stanley Hauerwas argued that "war serves as the great liturgical event for Americans, where we sacrifice the youth of the present generation to show that the sacrifices of the youth of the past generations were worthy."  War, he is saying, is for us a foundational moral experience; violence creates our ethics. "Ender's Game" is, I think, an evil book precisely because it pushes that worship of violence to its limit not in order to question it, but to validate it in its most extreme form. But it's a valuable book in the way that Kipling's paeans to imperialism are valuable — because sometimes it takes a true believer to really show you how a morally reprehensible belief works.

Card shows that the belief in genocide is not founded, as is often suggested, on pragmatism. The eradication of the buggers is not practically necessary. For Card, nonetheless, it is a good in itself, because only through the deaths of their enemies can Ender, and humanity, find moral truth, beauty and insight. In "Ender's Game," genocide becomes a kind of sacrament.