Pick of the week: "Rush" delivers a delicious jolt of speed 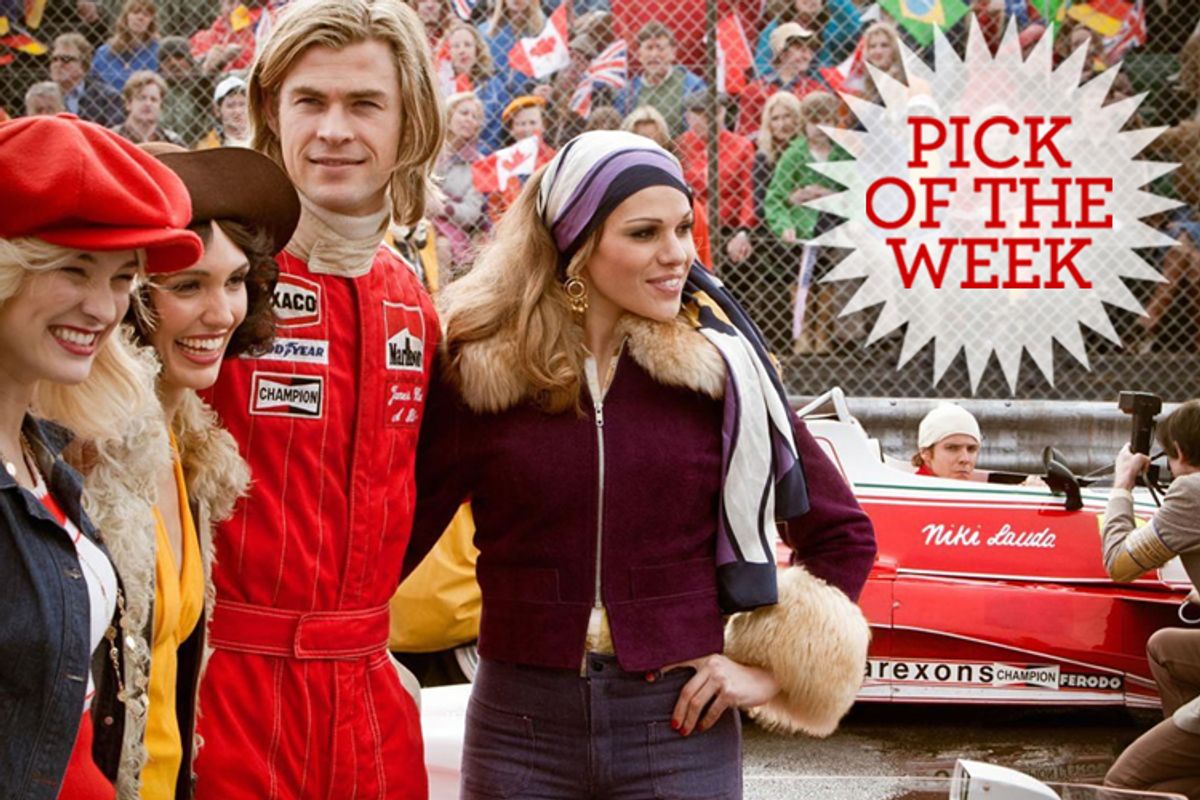 Nobody’s going to accuse Ron Howard’s “Rush” of excessive subtlety, but that’s not really what you’re looking for in a Hollywood movie about rival racing drivers with opposing temperaments, about as archetypal a setup as one can imagine without cowboys being involved. There’s plenty of cornpone alongside the racetrack curves in “Rush,” but this is tremendously exciting cinema – shot by the boundary-pushing Anthony Dod Mantle – as well as old-school escapist drama with ample eye candy for viewers of all persuasions. Howard has a mixed critical reputation (to put it kindly), but is best understood as a professional craftsman who rises and falls with his material. His films as a director range from riveting (“Apollo 13”) to dreadful (“Angels & Demons”), and it’s not coincidental that “Rush” reunites him with British playwright and screenwriter Peter Morgan, who also wrote “Frost/Nixon,” Howard’s last good movie. (Morgan’s other screenplays include “The Queen,” “The Last King of Scotland” and the underappreciated “The Damned United,” perhaps the best British soccer film.)

Morgan and Howard got hold of a true-life sporting saga that filmmakers have slobbered over for decades, the dramatic story of the 1976 Formula One racing season and the fierce rivalry between English playboy James Hunt (played by Aussie heartthrob Chris Hemsworth, Thor in the Marvel Comics movies) and Austrian tactical genius Niki Lauda (German actor Daniel Brühl, in his first major Hollywood role). I’ve seen Brühl in several German-language films, and I’m not surprised that he’s perfect as the monomaniacal Lauda, but Hemsworth is the revelation here. He’s charismatic and funny, not to mention physically impressive, but also brings some depth to a character who could have been cartoonish, hinting at the real-life Hunt’s uncertainty and unhappiness. It seems peculiar to issue a spoiler alert for a movie based on well-known events, but most of the potential audience for “Rush” either won’t remember the Hunt-Lauda clash or weren’t interested at the time. I can’t avoid some discussion of what actually happened, but I’ll try to keep it general.

Those were years of maximum glamour and maximum danger in European motor racing, when many drivers partied deep into the night and one or two were killed or severely injured almost every season. The whole scene resembled a Helmut Newton photo shoot, with the drugs, vintage Champagne and long-legged models to match, and Hunt, a long-haired pretty boy with an aristocratic background and an upper-crust accent, was its poster child. In some respects, the Hunt-Lauda rivalry of the ‘70s prefigured the one two decades later between Alain Prost and Ayrton Senna, with the latter’s death during an Italian race in 1994 bringing down the curtain on that whole era. (If you haven’t seen Asif Kapadia’s terrific documentary “Senna” you’re missing out, and it doesn’t matter whether you know the first thing about auto racing.)

While Morgan’s screenplay sticks pretty close to the most fact-checkable elements of the Hunt-Lauda story, meaning details about when and where they raced and who won, a decision has clearly been made to ramp up the differences between them for dramatic effect. There’s no denying that they had divergent styles on the racetrack, where Lauda was a merciless and calculating tactician and Hunt was a reckless daredevil famous for his crashes. While Lauda was a diminutive racing nerd with a pronounced overbite (often nicknamed “the Rat”), who spent most of his career married and monogamous, Hunt was a legendary womanizer with a succession of tabloid-friendly relationships. His model wife, Suzy, played by Olivia Wilde in the film, left him in 1975 for Richard Burton, who reportedly paid $1 million to fund the couple’s divorce. But Lauda has said in recent interviews that he and Hunt always respected each other, and were good friends off the track, which isn’t what you see in the film. It also sounds as if Lauda wasn’t always a monk; he remembers crashing in Hunt’s London apartment once or twice, joined by a couple of late-night companions.

Those Hollywood simplifications rankle a bit, as does the way “Rush” skims over Hunt’s lifelong battles with fear, anger, anxiety and depression. (The girls, the drugs and the booze, not to mention the death-defying occupation, may have been his means of self-medication.) But even in this glossied-up version, watching Hemsworth and Brühl bicker on and off the track, and white-knuckling along with Mantle’s supercool race photography -- we're attached to the wheel! We're in the grass! We're looking through the driver's smeared visor! -- is so much fun you won’t be worried about biblical accuracy. Howard apparently knew almost nothing about Formula One racing going into “Rush,” and I would say the amount of explanatory material (including judicious snippets of real racing footage) is just about right.

Although “Rush” compresses the timeframe somewhat, it makes clear that Lauda and Hunt had known each other since they began racing in lower divisions in the mid-1960s, and that by the mid-‘70s they were brash newcomers in Formula One, who had arrived by unconventional means. Both started out with wealthy backers who bought them Formula One “drives” – Christian McKay has a nice supporting role as the eccentric Lord Hesketh, who bankrupted himself behind Hunt – and both were seen as interlopers. Lauda used his mechanical ingenuity and ferocious drive to leverage himself onto the Ferrari team – the New York Yankees or Manchester United of motor sports – and rapidly blew past veteran Ferrari driver Clay Regazzoni (Pierfrancesco Favino), winning the Spanish and Dutch Grand Prix races on his first year with the team, and seven more races and a runaway world championship in his second year, which was 1975.

That set up the big 1976 showdown with Hunt, who got a last-minute “drive” with the prestigious McLaren team, after Lord Hesketh pulled out, on the premise that he was the only driver good enough to stop Lauda and Ferrari from repeating as champion. How that all played out, in a legendary contest that featured one of them nearly dying on the track, a courageous comeback that abruptly shifted the public perception of both men, and one of the closest finishes in Formula One history, is the stuff of legend. We’re nearly done here, but if you really don’t want to know what happened, now would be the time to go click on something else.

There was so much soap opera in that 1976 season that Morgan and Howard have to pick and choose, which may frustrate fanatics like me but probably makes for a cleaner motion-picture entertainment. They focus considerable attention on the technical protest lodged by Lauda that temporarily cost Hunt his victory in the Spanish Grand Prix, and could have scuttled his entire season, but never mention that Hunt was actually stripped of a victory in Britain a few weeks later, for an entirely different rules violation. But as any racing fan of that era will remember, the pivotal event of the 1976 season – and the dramatic centerpiece of this movie – was Lauda’s near-fatal fiery crash at the Nürbringring in Germany on Aug. 1. Maniacally determined to beat Hunt, Lauda returned to racing (against medical advice) just six weeks after being given last rites in the hospital, with his mutilated face covered with scar tissue and hastily completed skin grafts. (For reasons of his own, Lauda, who is now in his 60s, has never had more extensive reconstructive surgery.)

There’s no way to categorize that except as a form of madness, and while the quest to become the best person in the world at driving in circles may seem like an especially idiotic form of madness, it’s arguably no more pointless than most other forms of human competition. Again one feels the limitations of Hollywood cinema in “Rush,” in that there’s so much more to say about the aftermath of that 1976 season and about both men’s attitudes toward life and death than this picture can manage. This is the best and most exciting auto-racing movie for years if not decades, which doesn’t stop me from wishing it were better, or its epilogue more satisfying. I can tell you that Niki Lauda won two more world championships after his accident and has had a successful business career since retirement. It was Hunt, oddly enough, who never seemed to get past the trauma and drama of '76, drifting away from the sport and dying of a heart attack at age 45. He died young and stayed pretty, while Lauda is still alive with a face (as he puts it) that scares people. I don’t know what to think about that, honestly; it all depends on your point of view.