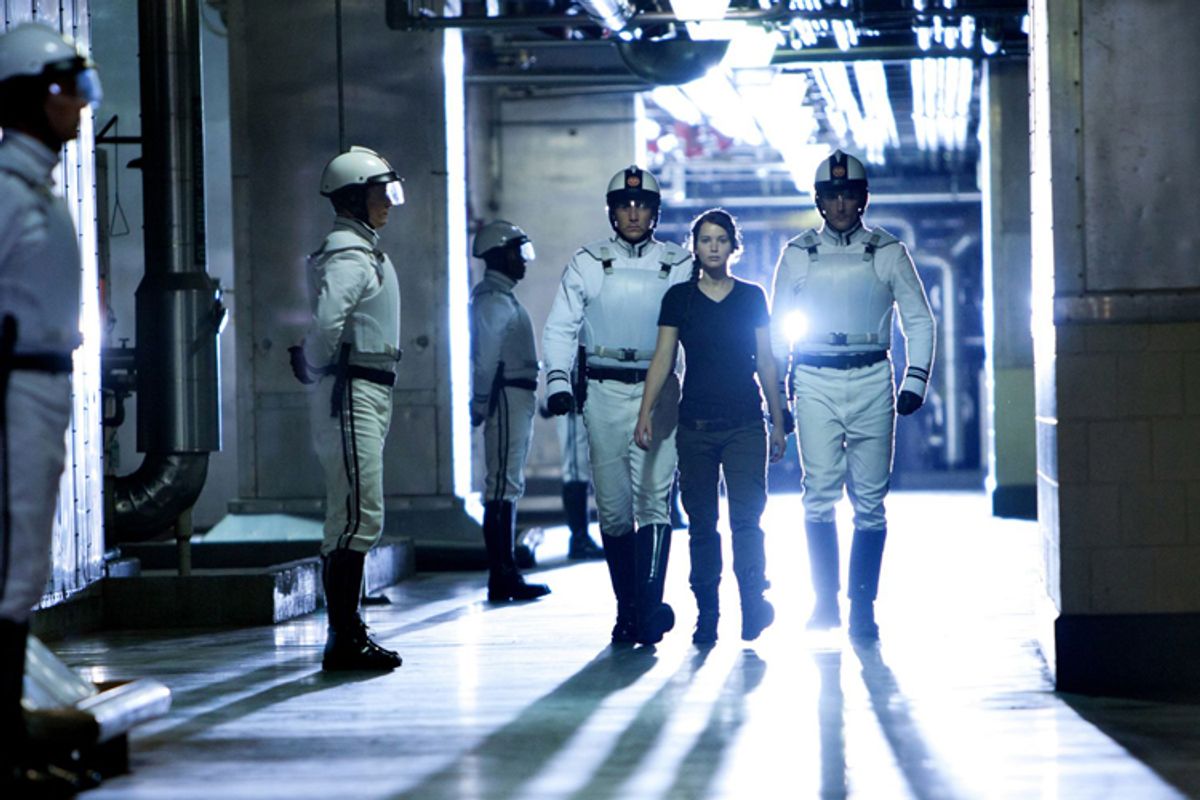 American conservatives love to attack anyone who raises the issue of worsening economic inequality for waging “class war.” Their compulsion to keep repeating that phrase is revealing in itself; it’s like the serial killer in a movie who can’t help returning to the scene of the crime. Because the only class war being waged in 21st-century America is the relentless, all-fronts struggle conducted by the rich against the poor.

Within the last week, we have learned that poverty remains at near-record levels in our supposedly affluent nation. Even amid a so-called economic recovery, nearly 22 percent of the nation’s children live in poverty, and the overall number of poor people reached an all-time high, at 46.5 million. Income inequality, meanwhile, is roughly twice as bad as it was in the 1970s, reaching a level never seen before in this country or any other industrialized nation. The top 1 percent of Americans now bring home almost 20 percent of the country’s annual income, and have seen their tax bills decline by almost half. Britain, which has pursued similar tax-cutting policies over the last 30-odd years, finds itself a distant second in inequality, with its top 1 percent of earners commanding about 10 percent of total income. So while we may be behind the Brits in public health, life expectancy and almost every other quality-of-life indicator, we still totally kick their asses when it comes to disgusting rich people.

I suppose the “war on the poor” has become a hackneyed headline, but I can’t think of a better descriptive term. It’s certainly not a new phrase, although it was recently resuscitated by MSNBC; in left-wing discourse, it goes back at least as far as Nancy Folbre and Randy Albelda’s economic manifesto of that title, published in 1996. This extended class war has been an extraordinary success, and through the long lens of history it looks less like a series of disconnected events than a coordinated campaign to drive the bottom one-fifth – or one-third, or one-half – of the population into lives of endless drudgery and political apathy, while maximizing corporate profits and concentrating both wealth and power in a tiny oligarchy at the top of the pyramid.

We could use some of the old-school class warfare in the United States, that’s for damn sure. There are occasional glimmers of it, like the Occupy movement, the attempts to organize workers in fast-food restaurants and big-box stores and even, in an ass-backwards kind of way, the Tea Party. But that’s a long road, and I’m not holding my breath. The immense material victories of the last three decades, in which the top income-tax rates have been slashed and the richest people have grown immensely richer, were made possible in the first place by an ideological victory whose consequences are even more far-reaching.

What Marx and Engels would have recognized as the working class has been convinced, in essence, that it does not exist. Workers in the service economy, at Target and Walmart and Starbucks, are seen as atomized, transient strivers – on their way toward college or the Army or the middle class or disability -- and not members of any class at all. Those who work in traditional working-class industrial jobs – to the extent they still exist – have been largely decoupled from the labor movement and persuaded to make common cause, on cultural or racial or moral grounds, with those who specifically oppose their economic interests. I live for part of the year in a town in central New York State that is extremely poor and virtually all white, with high levels of unemployment and many residents who depend on government benefits to survive. It has voted overwhelmingly Republican for so long that Democrats often don’t bother to contest local elections.

You have to consider this context when you look at the Republican Party’s apparently irrational and monomaniacal campaign to sabotage or delay Obamacare, which with all its flaws will make health insurance available to millions who don’t have it, or this week’s House vote to cut $40 billion from the federal food stamp program, a move that could immediately sink as many as 4 million people into poverty. Most elected Republicans, even the Tea Party zealots, probably understand that they won’t get everything they want on these issues. The food-stamp bill passed by the House on a narrow partisan vote will never reach the Senate floor in its current form, and President Obama will surely fight like hell to implement his health-care bill, which will determine his political legacy more than any other single factor. But it’s a mistake to assume that these attacks are nothing more than symbolic political gestures, meant to placate the right-wing base and fend off Tea Party challengers in Republican House districts. There’s a deeper method behind the madness.

In this case, I think we must take the unusual step of taking politicians at their word, and realizing that congressional Republicans mean what they say. Cutting government benefits like food stamps that directly help poor people, and reinforcing the notion that healthcare is an expensive privilege attached to full-time work, rather than a basic right available to all, are central elements of contemporary conservative ideology. Indeed, anything that drives down wages and compels ordinary people to work more for less is objectively a good thing, from the point of view of the Republican Party’s corporate overlords, with or without the convenient excuse of shaving a few pennies off the federal deficit. (Indeed, contemporary conservatives only care about budget-cutting as a means to enable their social agenda; they’ll approve any amount of outrageous spending on the military or the national-security state.)

This is a key concept that gets glossed over in the obfuscatory partisan rhetoric of Washington, so I’m going to say it again in a slightly different way: The contemporary hard-right core of the Republican Party only represents the wealthiest people in our society, especially the executives and major shareholders at big corporations. Those people do not actually want to create a more generally affluent society or grow the middle class or any such nonsense. In fact, I’m pretty sure that the more astute econo-wonks on the right have concluded that America’s three decades or so of postwar affluence had undesirable social effects (i.e., the 1960s), and cannot or should not be resurrected. Their vision of social peace is entirely different: The vast majority of the population laboring constantly for flat or declining wages and minimal social benefits, masked somewhat by falling prices for food, clothing and electronic gizmos, and buoyed up by the mythological notion that any one of them, at any time, may suddenly ascend to the empyrean heights of the glittering 1 percent.

Stephen Pimpare, a professor at Columbia and the City University of New York and the author of “A People’s History of Poverty in America,” puts the same concept in somewhat more academic terms. Attacks on food stamps, disability insurance and similar programs, he says, “serve to disguise another kind of economic agenda -- labor markets matter to the benefactors of anti-relief ideologues, and cutting off access to aid or decreasing its value help to lower wages. In fact, those nations and even those U.S. states with more generous social supports tend also to have higher wages: High unemployment and stingy benefits are a boon to employers, since a desperate worker is a cheap and compliant worker.”

It’s like a nightmarish distortion of Alexander Hamilton’s ideas about a democracy governed by the commercial elite, mixed with “American Idol,” the Powerball lottery and “The Hunger Games.” Furthermore, it’s entirely logical for conservatives to keep pushing toward their ultimate ideals, since there is no party that consistently and coherently opposes them on fundamental economic or ideological grounds, and since they generally win more than they lose. During the House debate over the food-stamp cuts, several Republican members invoked the name of Bill Clinton, saying that this new punitive legislation followed in the footsteps of the bipartisan welfare-reform bill he signed in 1996, which for the first time compelled welfare recipients to work for their benefits.

In fairness, I should say that no House Democrats voted for this bill, and there were 15 Republican defectors – including Chris Gibson, who represents that poor upstate region of New York I mentioned earlier – making the final vote extremely close. But in the bigger picture, bringing up Clinton’s policy of appeasement and “triangulation,” or Obama’s periodic attempts to forge a “grand bargain” with John Boehner, is entirely fitting. Republicans know from many years of experience that if they push hard enough – on guns, on abortion, on welfare or healthcare or any other bedrock issue – Democrats will ultimately buckle and seek a compromise, even when the public doesn’t want them to.

That’s because the Democratic Party is riven by internal contradictions, no longer represents the interests of working people with any consistency, and is (pardon my French) shit-scared of being portrayed as effete, effeminate and disloyal to the mythology of American exceptionalism. If history is any guide, Republicans will get at least some of what they want, most likely by sinking Obamacare in bureaucratic quicksand and extracting slightly less onerous cuts in the food stamp program, while liberals try to portray yet another class-war retreat as a victory. Somewhere down the line, I suppose the rest of us will fight back, and bring the 1-percenters and their ideological shock troops the class war that scares them so much, and that they so richly deserve. But when?