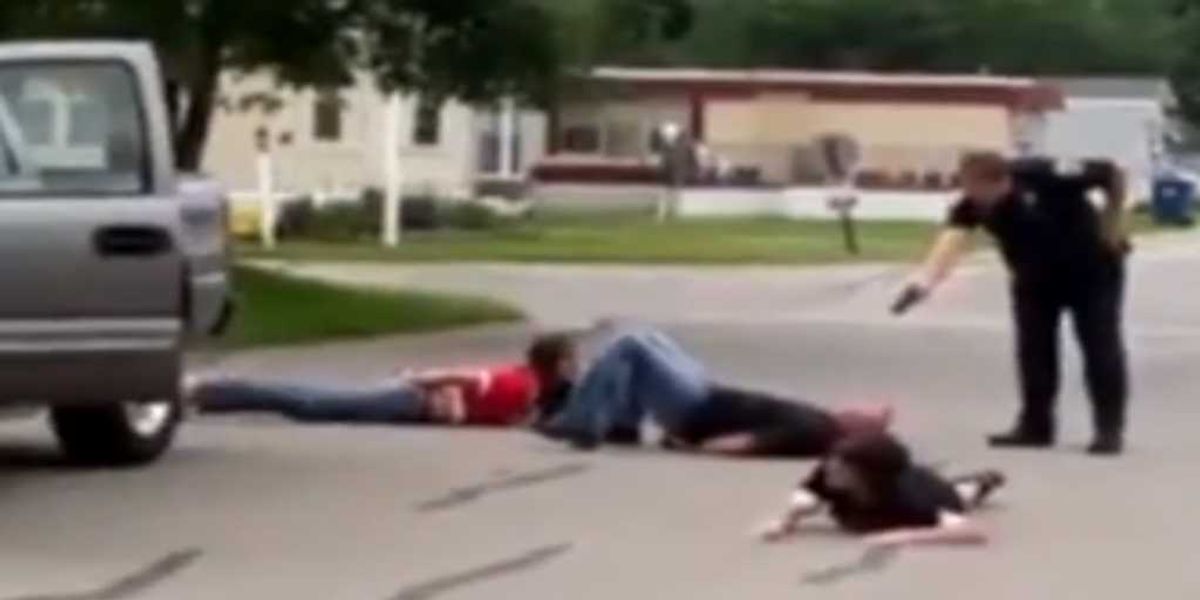 In Toledo, Ohio, a police officer made an entire family lie in the street with a gun pointed at their heads—and it's all on YouTube.

Why the traffic cop, identified later by authorities only as “Officer Hart,” took such extreme action remains a murky issue, but the dispute apparently arose out of one of two scenario. Although the video description alludes the family asking Hart to move his cruiser from where it was blocking their driveway, it seems instead that mother Cassandra Meyers was initially pulled over for a licence plate violation. When her father-in-law, Aaron Tatowski, arrived on the scene in his truck with his girlfriend and Meyers’ three children, he approached the officer and pressed him about the way he was questioning Meyers.

According to TNN, Tatkowski claims the officer threw him and his family to the ground.

The video clearly depicts Tatowski, Meyers, and the eldest son flat on the ground as Officer Hart brandishes his handgun. Witnesses can be heard dialing 911—“get another cop,” one says—and expressing concern about the two babies still sitting alone in the truck. Another bystander advises Tatowski to be quiet and stop antagonizing the officer: “Shut up, Aaron,” he says, though it’s Meyers who screams loudest, bringing the whole neighborhood out. Eventually, Tatowski is the one arrested, and Hart tosses aside the phone of someone else recording the altercation.

Warning: The language in this video is NSFW:

Both Officer Hart’s report and the official response from Washington Township Police state that because the “suspects” in this case were disobeying direct orders, the use of force and unholstering of weapons (at one point a taser also made an appearance) was justified.

But the heat generated by this disturbing clip going viral could well make Hart’s superiors change their tune.