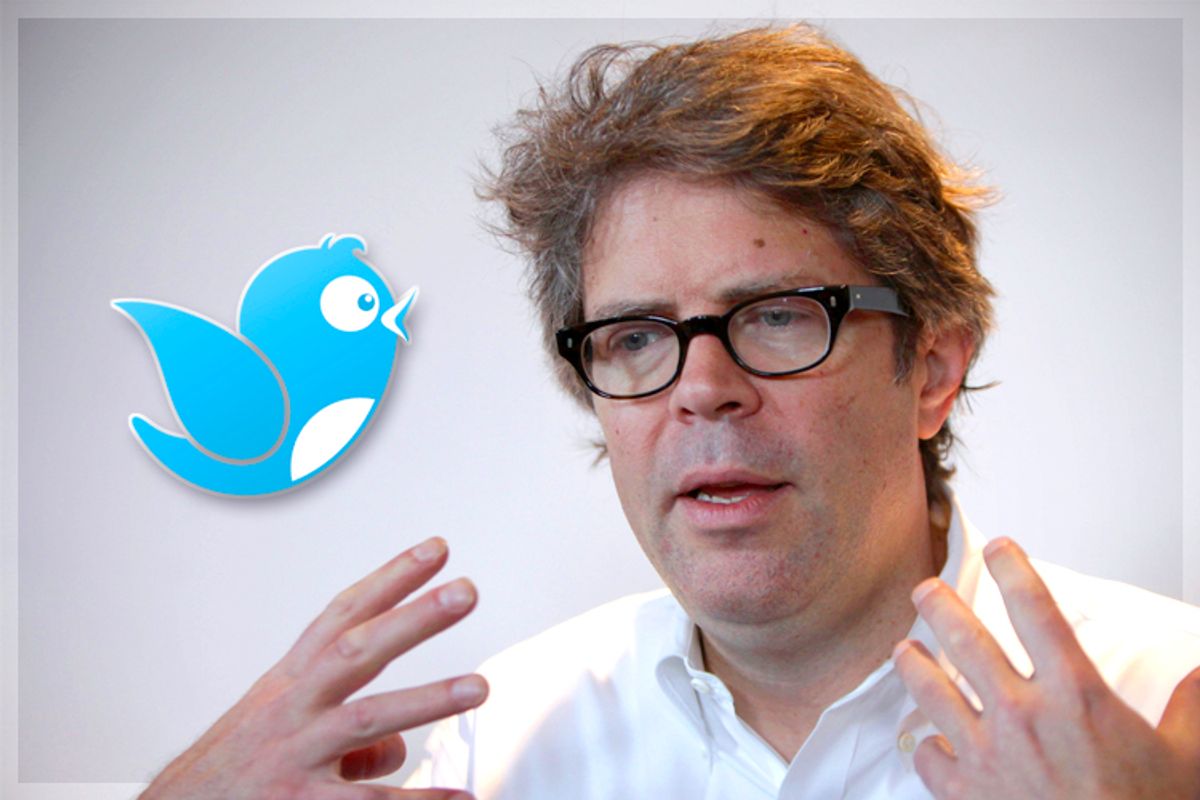 Excerpted from Smarter Than You Think

The rise of short-form social media hasn’t gone over well with everyone.

Indeed, social critics have been withering in their disdain. The status-update world, they say, is a parade of narcissism — vapid, inward-looking, and idiotic. Twitter and Facebook, in particular, have been lightning rods for these judgments. “Who really cares what I am doing, every hour of the day?” wondered Alex Beam, a Boston Globe columnist, in an early essay pondering Twitter. “Even I don’t care ...” As this complaint usually goes, ambient signals are far too brief to convey any serious meaning or conversation — indeed, they train a young generation to think only in bite-sized, nonlinear, agrammatic chunks of LOLspeak. Worse, they channel our endless appetite for self-regard, turning everyone into the star of their own private reality show. And they push into hypermetabolic overdrive the modern culture of “personal branding”, encouraging everyone to regard their life as a corporate endeavor, racking up massive tallies of followers and “friends” — friends which, of course, bear absolutely no relationship to actual friendship — merely in the service of having a megaphone into which the Dunciadic masses can overshare nothing of any discernible value.

Twitter, as the editors of the literary magazine n+1 despaired, opens a portal onto “the narcissistical sublime.” They continued: “What tweet is that, flashing, subliminally, behind the others? In exactly 140 characters: ‘I need to be noticed so badly that I can’t pay attention to you except inasmuch as it calls attention to me. I know for you it’s the same.’ In this way, a huge crowd of people—40 percent more users since last year—devalue one another through mutual self-importance.” Bill Keller of the New York Times denounced Twitter as “the enemy of contemplation.” And don’t even get these guys — and they’re very often guys — started on sites like Pinterest, where women (and they’re very often women) broadcast dioramas of scenes and pictures they find aesthetically lovely. “Dreck,” as one of my high-tech writer colleagues sniffed.

It’s undoubtedly true that plenty of people online can seem self-involved, and that these tools exacerbate it. The tools are, after all, designed to encourage self-disclosure. Social critics, including Christopher Lasch in his famous book "The Culture of Narcissism," have argued for decades that self-regard is on the rise. Lasch pinned a good chunk of the blame on the erosion of institutions that, as he saw it, historically encouraged people to focus outside themselves, such as religion, family, meaningful work, and class. Deprived of such traditional roles, Lasch argued, American identity in the 20th century became fragile, requiring incessant attention from others for validation. In recent years, psychologists like Jeanne Twenge have argued that there’s empirical proof of an epidemic of narcissism, though the actual data isn’t all that clear. (Indeed, some might show the reverse.) Still, even if you don’t grant the full force of these sweeping proclamations, it’s hard to disagree that much of what happens in the status-update universe is pretty banal. As Clay Shirky has pointed out, this is an inevitable side-effect of mass publishing. You can’t uncork so much expression without seeing a plunge in the quality of the average utterance.

But I suspect what’s really going on is not terribly causal. I doubt the ambient broadcasting universe is making people more trivial. What it’s doing is revealing how trivial we’ve been all along, because it’s making conversation suddenly visible.

We might flatter ourselves by pretending that, before Facebook and texting and “thoughtcasting”, our conversation was uplifting and erudite — focused on higher culture and civic life, studiously avoiding self-regard and gossip. But research suggests that’s a myth. When British anthropologist Robin Dunbar studied everyday face-to-face conversation in Britain, he found that people spent fully 65% of the time talking about themselves and other people: What you could politely call “social experiences”, or less politely, “gossip”. (The only big difference, at least among the younger people, was that men were far more focused on themselves. When talking about “social experiences”, women spent two-thirds of their time talking about other people’s social experiences; men spent the same amount of time talking about their own.) Dunbar doesn’t think our deep interest in the doings of others is a bad thing, mind you. His hypothesis is that language evolved precisely to allow us to socially “groom” each other, in the way that primates — and probably early humanity — groom one another physically. Knowing what others are doing is so crucial that language, one of our signal intellectual gifts, evolved precisely so that we could do this. It is the glue of society. When people freak out about the triviality of online mobs, they are probably not listening carefully to their own daily talk. Or more charitably, before the Internet came along, they lived in a bubble where they could at least hope that the daily talk of the hoi polloi was uplifting, because they had no way of eavesdropping on it. Now they do. Digital tools are making the previously invisible visible, which is always unsettling.

In fact, the historical pattern here is steady: Each new tool for communications has provoked panic that society will devolve into silly chatter. Take the telephone, for example. It would, critics predicted, atomize society into a blasted landscape of pasty, sun-averse morlocks unable to socialize face to face, because they’d be out of practice. Who would bother to leave the house, when you could simply call someone? Worse, it would degrade human interaction into a rambling exchange of trivialities, as Mark Twain suggested in his 1880 satirical sketch, “A Telephonic Conversation”. Meanwhile, mavens of etiquette fretted that the telephone would coarsen our manners, because the predominant greeting — “hello!” — derived from the shout of “halloo”, a bellow used to summon hounds to the hunt. (Americans fought about the propriety of “hello” until the 1940s.) Today, of course, everyday use has so domesticated the technology that nostalgics now regard the telephone as an emotionally vibrant form of communication that the Internet is tragically killing off.

This isn’t to say that technology changes nothing for the worse, or that these criticism weren’t partly correct. “Technology is neither good nor bad; nor is it neutral,” as the technology thinker Melvin Kranzberg pointed out. It’s why each tool needs to be carefully scrutinized. The stuff we find merely annoying about a new tool in the short run is often off-base, and we can miss the subtler ways they alter patterns of thought in the long run. Personally, I suspect a bigger danger of modern ambient contact is that it reinforces the “recency” effect — making us feel information arriving right now is more important than events that happened yesterday, last month, or last century. We’ve long struggled, as a culture, to pay attention to the past. It’s probably harder now than ever.

So no, I don’t think new media are bringing on a social dystopia. But they’re not bringing on a social utopia, either. That’s an equally metronomic pattern: For every technological doomsayer in history there was a rival prophet of glee, promising that new communications would erase our problems. War and conflict, in particular: Back in the 19th century, the telegraph was supposed to put us in such intimate global contact that killing a foreigner would seem as barbaric as killing your neighbor. “This binds together by a vital cord all the nations of the earth,” gushed the authors of the 1858 book "The Story of the Telegraph." Decades later, the airplane would help humanity transcend itself: the “aerial” man, wrote the feminist thinker Charlotte Perkins Gilman in 1907, “cannot think of himself further as a worm in the dust, but as a butterfly, psyche, the risen soul.” Then it was TV that would bring about the end of war; then the Internet and mobile phones.

The comedian and writer Heather Gold, one of the cocreators of the concept of “tummelling”, once told me that social media is unsettling to many is because it feminizes culture. All this “liking”, this replying, these bits of conversational grooming — “phatic” gestures, as sociologists would call them, which comprise a significant chunk of our ambient signals — are precisely the sorts of communiques at which women are traditionally urged to excel. “You go online and all these type-A, alpha-male business guys are acting like 13 year old girls, sending little smilies to each other publicly and going hey, happy birthday!” she told me. Obviously, these are crude categories; many men have superb social skills, many women have terrible ones, and as feminists have long noted, the relegating of women to “social” jobs is part of how they’ve been sealed out of decision-making roles for millennia. But this shift towards a world that rewards social skills is real, and explains part of the reaction against it.

Or to put it another way, reaping the cognitive benefits of the Internet often requires social work. This distresses anyone for whom social work is a chore, or seems beneath them.

Excerpted from "Smarter Than You Think: How Technology Is Changing Our Minds for the Better." Reprinted by arrangement with The Penguin Press, a member of Penguin Group (USA) LLC, A Penguin Random House Co. Copyright © Clive Thompson, 2013