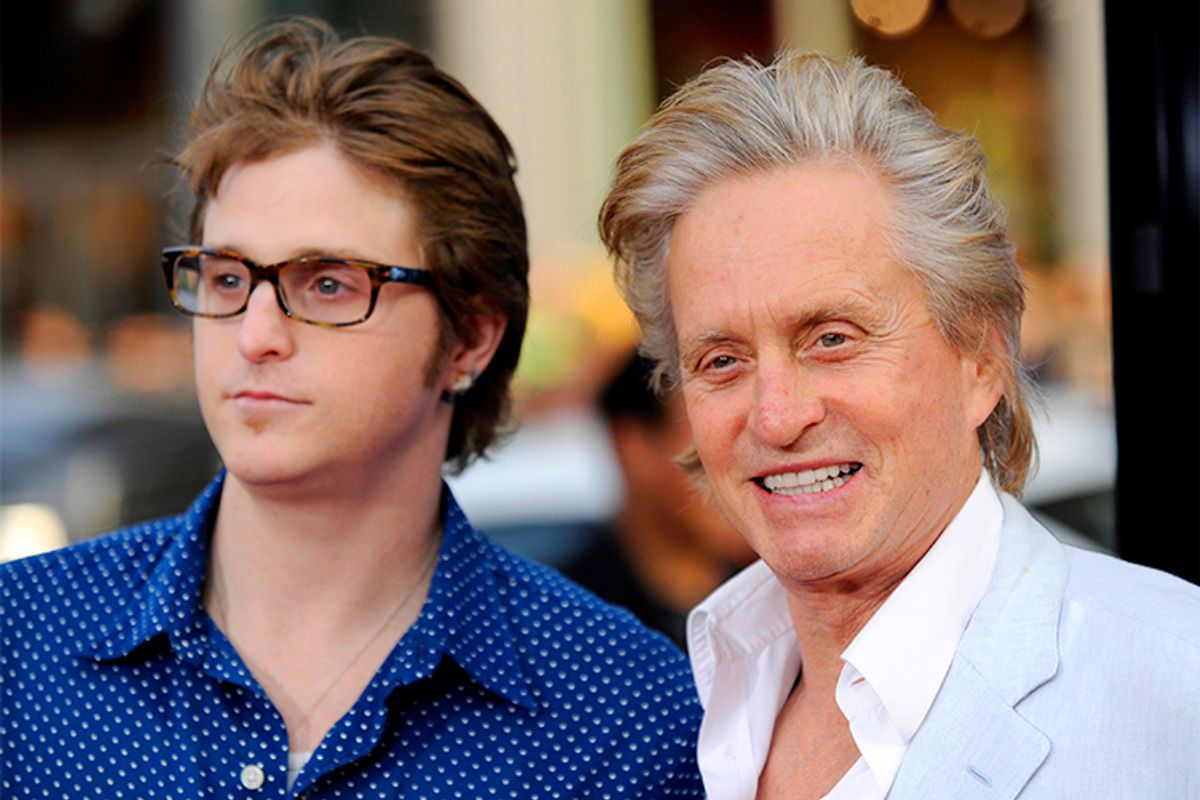 When he picked up his Emmy Sunday night for "Behind the Candelabra," Michael Douglas earned plenty of attention for his breezy, double-entendre-spiked acceptance speech. But it was his brief expression of gratitude to and hope for his son Cameron that deserves the real attention.

"Shout out to my oldest son, Cameron," he told the audience, "and hoping that I'll be able and they'll allow me to see him soon." Douglas' elder child, by his ex-wife Diandra, is currently in solitary confinement for failing a drug test while serving a nine and a half year sentence on drug charges. The younger Douglas had originally been sentenced to five years for possession and selling drugs including methamphetamine and heroin, but his term was nearly doubled when he confessed to smuggling drugs into prison.

Backstage Sunday night, Michael Douglas told reporters, "If you happen to have a slip … they punish you. Right now I'm being told I cannot see him for two years. It's been over a year now, and I'm questioning the system. Obviously, at first I was disappointed with my son, but I've reached a point now where I'm very disappointed with the system."

It's a system in which more than half of our prison population is now made up of drug offenders, only a small percentage of whom are also violent. It's a system in which one-third of the prison population are first-time offenders. And it's a system that deploys solitary confinement – a barbaric practice -- as a tool of punishment with shocking regularity. As the ACLU explains, prisoners in solitary are alone between 22 and 24 hours a day. They are fed through a slot in the door. They are deprived of natural light. They are restricted or denied outright "reading material, television, radios and other property," and they have "severe" limits on visitation. The ACLU estimates 80,000 people are being held in restricted housing, many of whom are nonviolent offenders -- and many of whom have mental illness, addiction or other disabilities -- in conditions designed to provoke a variety of "negative psychological reactions." Some of those inmates aren't even adults – they're juvenile offenders who can be held for up to five days "as a means of discipline" or for their own "safety." The emotional and physical long-term consequences can be debilitating, and the justification is all but nonexistent. And if you don't care about human rights, know that solitary is also wildly expensive to maintain.

Cameron Douglas has a famous father who can speak out about his situation. But his story matters, because it's being played out in the lives of thousands of prisoners and their families, right now. Has Douglas, whose uncle Eric died of "the effects of alcohol, tranquilizers and painkillers" nine years ago, broken the law repeatedly? There's no argument there. But does the man cavalierly referred to in the press as "Michael Douglas' junkie son" deserve what his lawyer argued in December "the harshest [sentence] ever imposed on an inmate for having drugs in prison"? Does anybody?

Michael Douglas told reporters Sunday that his son has "been a drug addict for a large part of his life." But he added he is also "a prisoner who is nonviolent, as about a half-million of our drug-addicted prisoners are." Douglas went on to note that "The United States represents 5 percent of the world's population and we have 25 percent of the world's prisoners," and that, "as you can see from what Attorney General Eric Holder has been doing regarding our prison system, I think things are going to be revived, regarding nonviolent drug addicts."

Over the past several weeks, the attorney general has been working to change the way justice is meted out in this country, seeking to curtail stiff mandatory sentences for low-level drug offenses. Holder says, "By reserving the most severe prison terms for serious, high-level, or violent drug traffickers or kingpins, we can better enhance public safety. We can increase our focus on proven strategies for deterrence and rehabilitation. And we can do so while making our expenditures smarter and more productive." It's a step that requires seeing prisoners as human beings, and addicts as individuals in need of treatment instead of medieval forms of punishment. And it's just one change, in a long line of many that have to happen, before fathers like Michael Douglas can see their sons and daughters again.