Ladies are getting better roles than ever -- but nobody's aging anymore 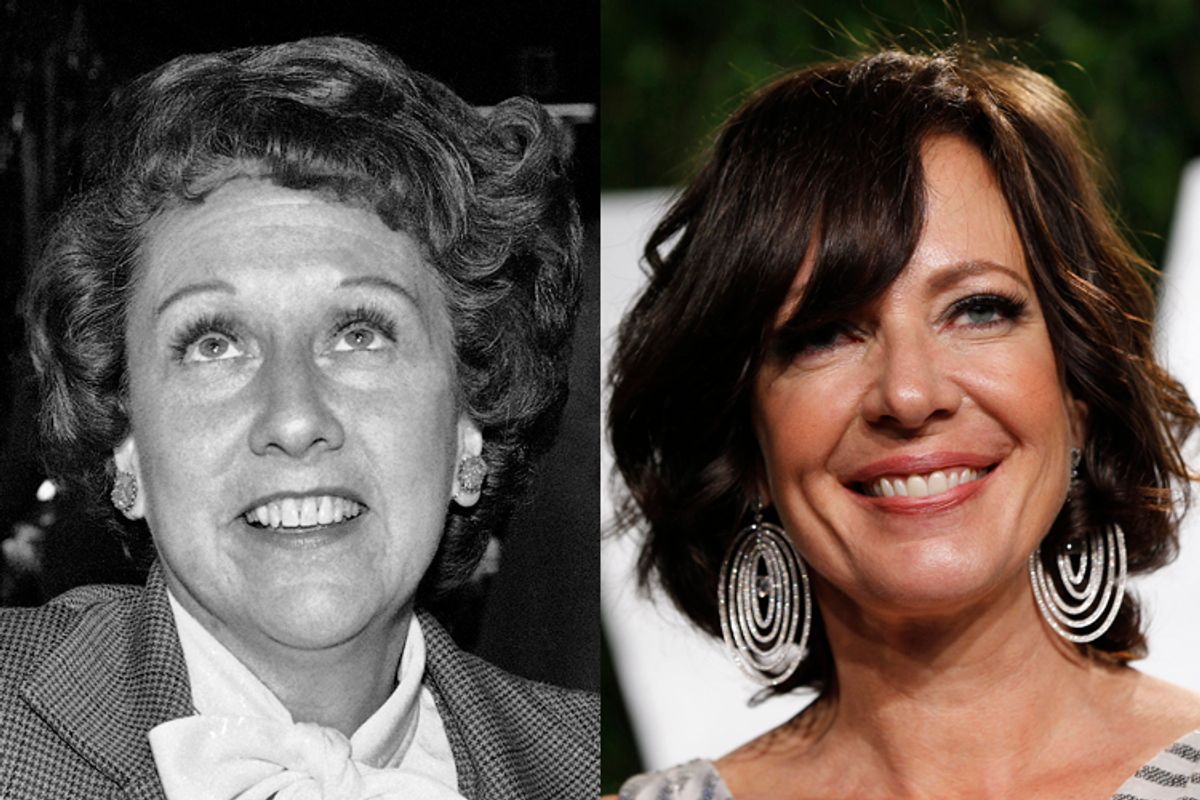 To watch Sunday night's Emmys, you'd come away with the unmistakable impression that it's a great time to be a woman over 40. And it is. But if you watched the proceedings, you'd also have come away with the impression that in entertainment, over 40 is a far cry from what it used to be -- and an age that means something entirely different than it does in the real world.

This year's Emmy nominees included an incredible lineup of talent: Vera Farmiga, Robin Wright, Connie Britton, Christine Baranski, Tina Fey, Laura Dern, Edie Falco and Amy Poehler. The winner's circle was crammed with the likes of 45-year-old Anna Gunn, 46-year-old Carrie Preston, 49-year-old Laura Linney, 52-year-old Julia Louis-Dreyfus and 53-year-old Melissa Leo. Among the evening's most glamorous guests were 53-year-old Allison Janney and 53-year-old Jane Lynch. The women's success – and the meaty, lively, frequently sexy roles they play -- are evidence that as youth-obsessed as our popular culture may be, we also now live in a world in which a female is no longer automatically considered over the hill when she hits 35. So it was almost jarring when, in middle of that parade of taut figures and flawless faces, Rob Reiner stepped out to pay tribute to his long-ago TV mother-in-law, Jean Stapleton.

Forty years ago, Stapleton gained fame on "All in the Family," portraying the apron-wearing, frumpy haircut-sporting, solidly built Bunker family matriarch Edith. Edith was great. And Edith was plain. In the series' famed opening theme, she was depicted seated at a piano next to her similarly middle-aged-spreading husband Archie, wearing glasses and singing nostalgically about the olden days. When she shot the show's first season, Stapleton was 47 years old. Last month, Jennifer Aniston starred in a movie in which she plays a stripper. She is 44.

In the television world that the current generation of TV moms and movers and shakers grew up with, women of a certain age were expected to have a few extra pounds and lines. It was essential to their characters. Marion Ross was 46 when "Happy Days" premiered. Rue McClanahan was 51 when she first qualified as one of the "Golden Girls" – a flirty, sexually active Golden Girl, to be sure, but still considerably more lived-in looking than "Sex and the City's" purring 40-something Samantha Jones.

The way we women are depicted in the culture often feels like an endless game of one step forward, two steps back. Believe me, it's encouraging that there are great roles for women spanning a wider-than-ever range of ages, that women who are not in the first flush of youth are still out there playing complicated, funny, powerful characters. But there's also something lost when that range of ages is simultaneously narrowing to a far more restricted aesthetic. It means better opportunities, but for a smaller and more desirable pool of actresses. Imagine middle-aged Esther Rolle or Bea Arthur getting starring roles today. It seems impossible.

Watching Julia Louis-Dreyfus pick up her award last night, my daughter asked, "Isn't that the lady from 'Seinfeld'? How come she looks younger now?" I think it's a combination of good genes, good maintenance and because it's her job to look that amazing. You're not going to get a Selina Meyer who looks like an Angela Merkel. And we as viewers can be thrilled that Allison Janney has a new show, but let it be known she is a mere 17 years older than her television daughter Anna Faris. Maybe it's a "Gilmore Girls" thing, but that's doubtful. She can act up a storm, but she's also fantastic looking. Those awards show In Memoriam tributes are now among the few places on television to find an older woman who looks like an older woman. And the days when the blond adult character's mother could be Jean Stapleton are gone, gone, gone.