GOP’s secret blue-state playbook: The trick they use to stay alive

As Republicans set their sights on another big race, Christie, Rudy and others offer a cynical road map. Beware! 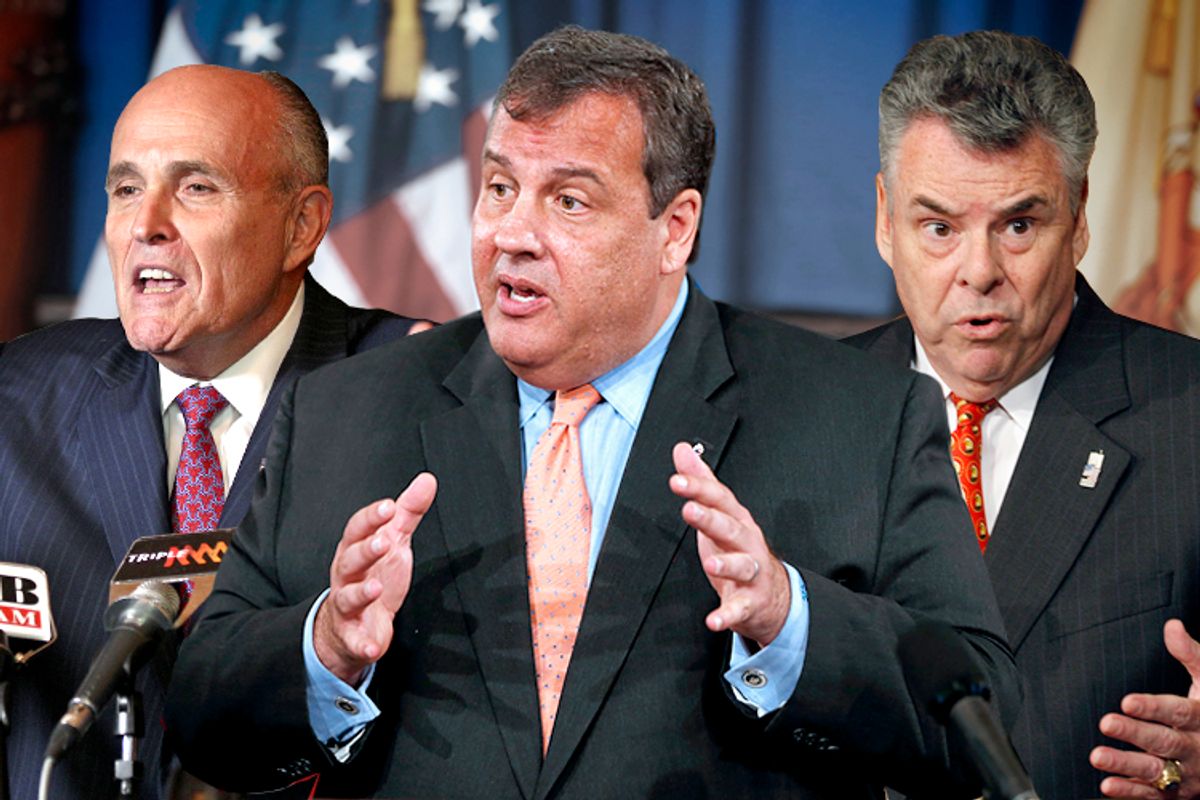 Things don’t look so hot for Joe Lhota, the Republican running for mayor in New York City. While his party won several mayoral races in recent decades, Democrats now outnumber Republicans there by 6-1. Two new polls show him trailing by 40 points. And, unfortunately, no bonus points are awarded for looking like Louis C.K.

But Lhota’s dismal odds do not mean it’s impossible for Republicans, in general, to win in blue states today. Gov. Chris Christie looks like he’s cruising to reelection in New Jersey, and Pete King, a Long Island congressman, continues to win with ease. They’re doing this as liberal areas of the country, particularly in the Northeast, are getting more liberal -- just as the national Republican Party is getting more conservative. So, what’s their secret?

Obviously, each district and politician has its own dynamics. And it takes many smart moves to defy demographic destiny. But among them, here’s one that blue-state Republicans -- from Christie and King, to Rudy Giuilani -- have been using for years to survive in hostile territory: Each has publicly picked a few strategic, rhetorical, largely non-policy disputes with his own party that made him seem independent and “above politics” – while continuing to pursue a conservative agenda all the while.

For Christie, of course, the most famous example was his willingness to turn on national Republicans and praise President Obama’s leadership in the wake of Hurricane Sandy. This isn’t to say his working with the president post-Sandy was necessarily cynical or entirely strategic, but the subsequent photo ops, arcade dates and bromance were brilliant political theater. That’s because they helped Christie look moderate, even though (contrary to the view of many Democrats) he is absolutely a conservative. Among other things, he’s defunded Planned Parenthood, regularly beat up on middle-class public workers, frequently screamed at teachers, and opposed pay equity for women.

But he also had the good sense and savvy to not only praise the president’s disaster response – a mostly non-ideological issue that in no way reflected an end to the governor's pursuit of right-wing goals – but also criticize Republicans who blocked storm aid for ravaged areas.

This has had the effect of softening Democrats’ views of him, both in New Jersey – where he’s currently favored to win his reelection by some 20 points – but nationally, where he’s often viewed as a moderate.

Giuliani was another practitioner of this trick. While the mayor was culturally liberal on several issues, he pursued conservative policing practices, racial polarization strategies and tax policies not necessarily in step with the city’s electorate. But in a memorable act of “apostasy” to the Republican Party, he endorsed Democrat Mario Cuomo for governor in 1994 over George Pataki. The conventional wisdom was that this backfired on the mayor when Cuomo lost, but the message the move sent early in his tenure was clear: He was above politics and not some right-wing tyrant to be feared (examinations of his actual record be damned).

Perhaps the greatest practitioner of this playbook, however, is King, the Long Island congressman. One of the few surviving GOP House members in the region, he has compiled a pretty conservative record (earning a 75 percent lifetime rating from the American Conservative Union, 81 percent on taxes and spending from the National Taxpayers Union, and 0 percent from NARAL). But he’s also managed to pick a series of meaningless fights with Republican boogeymen that have helped carve out an image of moderation.

Most recently, King (whose district was redrawn to be more Republican-friendly) made a big announcement that he wouldn’t attend a fundraiser that included Ted Cruz, citing the latter’s vote against storm aid. That followed an equally hollow call months earlier for donors to ignore Marco Rubio for similar reasons, and the national Republican Party before it. And those were all preceded by a fight with conservative tax crusader Grover Norquist, in which King garnered headlines for bashing the right-wing icon as a “low-life” – all while continuing to vote as a solid Republican.

Add to that a friendship with the Clintons that the congressman very publicly cultivated (he cannily voted against the former president’s doomed impeachment), and you’ve got the CliffsNotes to the Pete King playbook of How to Stay Alive as a Northeastern Republican. (Note: For those wondering what the political calculus was behind King’s long, impassioned crusade against deceased “low-life” and “pervert” Michael Jackson, political science has yet to advance far enough to divine such oddities.)

In the end, the success of blue-state Republicans like Christie and the others does not mean Lhota has much of a chance in November. He probably doesn’t. (After all: This.)

But, the key takeaway is that Democratic voters in other liberal districts -- who think a Republican politician may seem too good to be true -- may be right. Check his or her actual governing (or voting) record. That so-called moderate may just be using the Pete King playbook.