Home-care workers are not baby sitters!

Thanks to a new rule change, 2 million Americans will finally be treated as dignified adults. Here's what it means 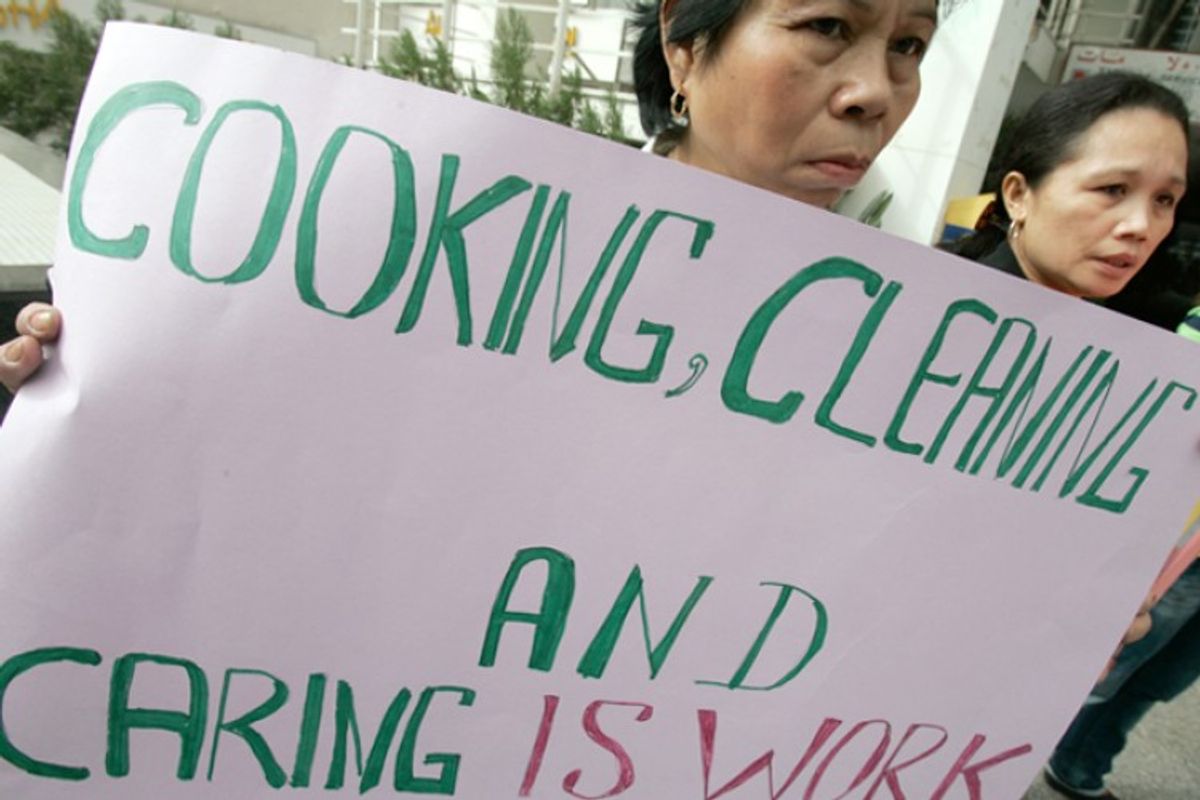 In a major and long-awaited move, the U.S. Department of Labor last week announced a finalized regulatory change that will extend federal minimum wage and overtime protections to nearly 2 million home-care workers for the first time.

Secretary of Labor Tom Perez told reporters that the long-awaited change “promotes the dignity of work” as well as “the dignity of aging in place.” He added that it meant workers caring for elderly or disabled clients in the home would no longer be treated like “teenage baby sitters performing casual employment,” but rather “treated with dignity, and their hard work is finally rewarded.”

As I’ve reported, President Obama first announced the proposed rule change in 2011, and some involved expected it to be completed within his first term. It represents one of the most significant pro-labor moves to date by the Obama administration, which has come under criticism from some advocates for scrapping proposed new Department of Labor protections for child farmworkers, and taking years to advance proposed regulations on dangerous silica dust. The new rules also represent a dramatic recognition of a reality decried by activists: Growing numbers of U.S. workers have been explicitly excluded from federal laws establishing minimum wage and hour standards, and establishing a right to unionize. That’s included most domestic workers doing caring and cleaning work in the home – a sector that could double in size as baby boomers age.

“What is happening is that work is becoming more unstable, insecure, dangerous and vulnerable,” Ai-jen Poo, the director of the National Domestic Workers Alliance, told me in an April interview. “When I first started organizing domestic workers, people kind of perceived it as this very exotic shadow workforce at the margins of the economy.” But today, said Poo, “As more and more people become temporary, part-time or contracted, nobody knows who their real boss is, no one has collective bargaining, no one even knows what bargaining is and no one works in a workplace where bargaining is actually feasible. We’re essentially all becoming domestic workers.”

By significantly narrowing a so-called companionship exception, the new regulations will extend New Deal Fair Labor Standards Act protections to an estimated nearly 2 million domestic workers for the first time. But those workers will remain excluded from the protections of the FLSA’s older sibling, the National Labor Relations Act, which guarantees (on paper at least) the right of most workers to win collective bargaining with their boss. Denied formal collective bargaining, domestic workers over the past decade have nonetheless formed activist organizations in several states – part of a trend I’ve called “alt-labor” – which aim to raise labor standards through tactics ranging from social pressure on employers to new statewide laws. The long-sought federal rule change may be their greatest victory to date.

Those new regulations will go into effect at the start of 2015. Administration officials noted that new wage and hour rules often take effect within a couple of months, and said the nearly 15-month lead-time was among the modifications made in response to feedback from stakeholders including disability rights organizations, whose members include home-care clients. Poo told me last month that a phase-in of any longer than a year would be “unnecessary, and every day that we wait workers are continuing to suffer in poverty.”

Perez was joined on a media call last week by American Association of People with Disabilities executive vice president Henry Claypool, who called the news an “important step forward” that “really makes an important investment in the home- and community-based delivery system that hundreds of thousands of people with disabilities and older Americans rely on each day.” In contrast, the disability rights activist group ADAPT posted a statement on its website prior to the announcement charging that “Instead of being given a seat at the table, we have had a door slammed in our face.” (ADAPT did not respond to an inquiry last week.) The administration framed the change as a step that would advance home-care consumers’ interests by helping to attract and retain qualified workers that might otherwise seek out other jobs covered by more federal protections. “A fair wage will further stabilize and professionalize this critical line of work,” said Secretary Perez, “which of course will lead to better quality care.”

Poo said last month that the cost of paying home-care workers minimum wage and overtime would be borne by a mix of agencies, private employers and public programs. Her group has partnered with organizations representing home-care clients to call for more dramatic changes in America’s home-care system, including an end to an alleged Medicare bias in favor of funding care in facilities rather than in the home.

The Obama administration action comes as California Gov. Jerry Brown faces the decision whether to veto a statewide “Domestic Worker Bill of Rights” with additional protections, which has passed both houses of California’s Legislature. Fighting back tears at a Los Angeles press conference this month, five-year domestic worker Lourdes Pablo said, “I can’t believe California protects workers that care [for] property, while not protecting the domestic workers that care for human beings”; Brown vetoed a previous version of the bill last year.

In a speech to the AFL-CIO’s convention prior to last week’s announcement, Labor Secretary Tom Perez promised, to enthusiastic applause, that, “We will not hesitate to create opportunity by using our regulatory authority to ensure that workers, including but not limited to home health workers, have the full protections of our wage and hour and overtime laws.” Asked afterward what other regulatory changes might be under consideration to expand the coverage of federal law, Perez told me that “the American workplace has evolved: the old paradigm were the large multi-story factories. Today the workplace could be the home.” While “every case is fact-specific,” said Perez, “it’s important to take a look at how the evolving definition of a workplace implicates the federal government’s ability to protect workers, both from a wage and hour perspective and from a worker safety perspective.”