The network's breathless tournament coverage has done no favors for the game's popularity and legality in the U.S. 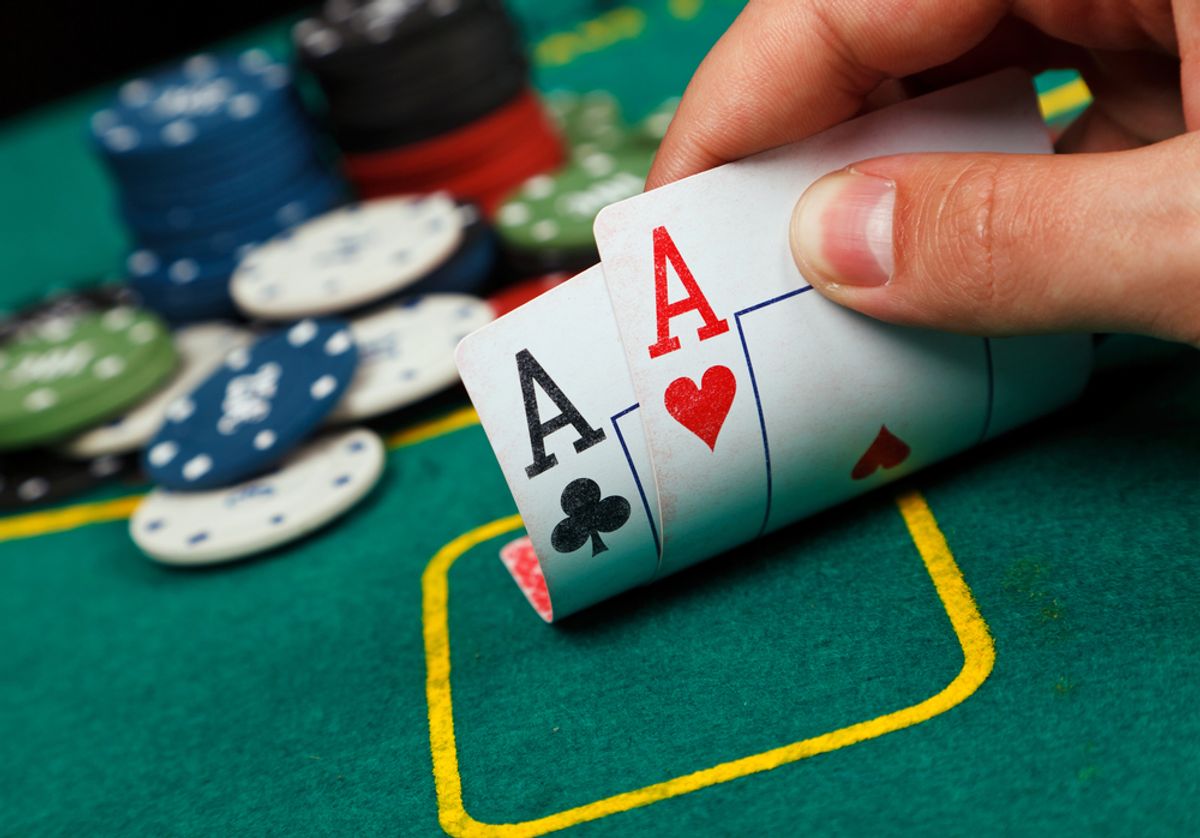 The 2013 World Series of Poker Main Event opened to a pastiche of landmark tournament moments from the last decade starting with, of course, Chris Moneymaker's serendipitous Main Event win in 2003.  Moneymaker - a then 27-year-old poker hobbyist with an easy going  countenance - won an online satellite tournament for a $10,000 entry fee to the Main Event, then navigated an 839 person field, "eliminating" various heady professional players on his way to a $2.5 million first place payday.

The "Moneymaker Effect" was poker-prozac and ESPN replayed the 2003 Main Event highlights in multiple-hour blocks at all times of day; making it feel like  Moneymaker was ousting Las Vegas legends like the Great Johnny Chan, The Great Phil Ivey, and then in a final heads-up duel, the Great Sam Farha hundreds of times over.

The Worldwide Leader in Sports’ continual replays of the event churned a typical short-run happenstance into an iconic event.  The odds of winning even a small field tournament are extremely small; over a relatively tiny number of hands, a great deal of luck is involved.  However,  literature and forum discussion emphasizing both these realities and an understanding of the mathematical, psychological, and logical complexities that made those Las Vegas legends so successful paled in comparison to the massive sample size of ESPN replays of short-run Main Event highlights.

By 2005, ESPN had succeeded in introducing a once cultish game to the mainstream.  In doing so, the network provided a delirious combination of escapism and the promise of making exorbitant amounts of cash the proverbial American Way.  The coverage drew in a number of online poker sites that ceaselessly promoted their “free play” software during commercial breaks.

That year, the online poker industry had amassed $60-billion in poker wagers with 2.4 billion dollars in reported revenue (up from 82 million dollars in 2001).  Consistent with the Moneymaker ethos, bold aggressive moves rife with logical errors paid off handsomely at the online tables.  Even insufferably tight players with only a basic understanding of hand values could wait for quality holdings and then let a litany of weak players pay them off with lesser hands or terrible bluffs.

Although online poker strategy was rapidly evolving, there continued a lingering debate about whether online poker sites could legally operate in the United States as "games of skill."  The Unlawful Internet Enforcement Gaming Act (UIGEA), a U.S. federal law passed in 2006, made it a federal offense for an online gambling site to accept payments "in connection with the participation of another person in unlawful Internet gambling." The UIGEA did not explicitly cover online poker, an ambiguity which harnessed public debate and litigation about online poker’s status in the United States.

Over the next five years, ESPN did no favors to bridge the necessary gap between poker’s nascent phase in 2003  and its widespread development into a complex if not tedious skill game during the latter half of the decade.

For a network so responsible for the online poker boom, its continual emphasis on short-run, high variance coverage of poker hands - Aces winning one hand and then getting quashed by a bad beat ten minutes later - continually ebbed against strengthening the perception of poker as a game of skill.

ESPN's World Series of Poker coverage routinely failed to provide by way of non-intrusive info graphics or quick commentary fundamental, skill-based pieces of information.  Rarely did the broadcast provide players' positions and stack sizes, or the tournament’s blind levels.  The audience was mostly treated to showdown results, which, whether it is poker, basketball, or finance, is always heavily flavored with luck. And eventually luck runs out.

On April 15, 2011, “Black Friday" in the poker world, a federal indictment was unsealed disclosing that the United States Department of Justice had filed a litany of charges against the three largest online poker companies extending real money poker games to United States residents at the time:  Full Tilt Poker, Pokerstars, and Ultimate Bet.  In addition to charges of bank fraud and money laundering, the Department of Justice accused each company of violating the UIGEA.  Based on these charges, the DOJ seized the ".com" addresses of each company; when Full Tilt Poker and Pokerstars pledged not to serve the U.S. market, the DOJ relinquished the domain names so the sites could do business in non-U.S. markets.

In July 2011, only three months after "Black Friday," ESPN made an interesting play: the network opted for the first time in its broadcast history to provide live hand by hand coverage of the WSOP Main Event featured tables over several days until the Final Table (broadcast live in November) had been reached.

Both the game and drama were organic.   Players' identities were given full autonomy from saturated reality TV gimmicks.  For all of ESPN's regular insistence that heightened moments came from speedy all-in eliminations and table banter, the audience was now able to experience the narrative backdrop behind those moments: the tortuous betting patterns and grinding hours of play that makes a large pot or an all-in moment not just an intense one, but dramatically satisfying.

On one memorable hand two young, razor-sharp tournament professionals - Matt Giannetti and Ben Lamb – jostled for hours, throwing flurries of small bets at each other, moves that would have unhinged a lesser player into making a big mistake much earlier in the day.  When the two finally broke their equilibrium of small pots and played a big hand, Gianetti spent ten minutes trying to complete a day-long puzzle and determine whether Lamb's substantial river bet meant trip twos, or a bluff.

In that moment, ESPN depicted poker as a game of skill and psychological constitution:  just one camera focused on a young man, dead tired after six days of making one high strung decision after the next, sitting under the low cackles of chips representing millions of dollars, trying to figure out if one of the trickiest poker players in the world had a powerful hand or a bluff.  The players owned the drama and the broadcast analysts quietly recognized this.

"This was something the sport needed in order to take the next step,” White said. “We don’t want poker to become stagnant. We want to be very fresh and progressive with our coverage, whether that means updating the featured table sets or increasing the amount of on-air analysis.”

Poker commentator Oliver Busquet had a more revealing, if not sincere, take on ESPN's live coverage of the Main Event in 2011.

“I’m supposed to cater to the audience,” Busquet reflected. “I didn’t want to dumb down the strategy and analysis for anyone. The hard-core poker fans certainly appreciated it, but even the amateurs could get some value. They either enjoyed it from an entertainment perspective or for the first time ever, they realized just how complex this game could be. This isn’t some random luck-based game played by degenerates and we shouldn’t be afraid to show that to the public.”

But now, just two years later, Busquet’s insights are gone from the broadcast.  He recently joined the World Poker Tour's coverage team.  Quite fittingly, the World Poker Tour is a smaller tournament circuit played on networks a fraction of ESPN's size.  Broadcast commentary, albeit rife with hip and sexy tangents throughout the show, has been dominated by professional players throughout the years.

Antonio Esfandiari - another brilliant broadcaster from ESPN’s live 2011 coverage - has a marginal role in this year’s telecast.  He, along with close friend and poker pro Phil “The Unibomber” Lak, now has a small two minute segment on the show in which the two - with requisite colorful  exuberance -  hurriedly break down some of the key elements of a just televised poker hand.  Esfandiari’s analysis is but a sliver of the remarkably accurate discussions he presented in ‘11;  it’s but quick, specialized segment in the show.

After 10 years of coverage, ESPN still fails to routinely provide basic information of each hand, which usually starts well after key bets have been made.  The infographics predominantly focus on cash prizes and the Tournament Leaderboard as opposed to even the most basic skill elements:  position, blind levels, and stack sizes.  All this in spite of a wealth of opportunities to accurately capture poker as an entertaining and complex game without pandering to gimmicky reality TV style broadcasting.

On ESPN's Aug. 27 coverage, two of the most inventive and interesting mid-20s poker players in the world - Annette Obrestad (Norway) and Yevgeniy Timoshenko (Ukraine) - had large chip stacks at the second of two featured tables.  Obrestad and Timoshenko are both elite high stakes players  who between them have won millions of dollars in both live and online tournaments.  They incorporate highly effective poker styles, with Obrestad known for her gnarly table demeanor and exquisitely well timed hyper-aggression, and Timoshenko for his meticulous nature and ability to make thin value bets that entices opponents to call with weak hands.

What would be emphasized if ESPN focused closely on this table  for an entire two hour segment was that it's never the "what" that is most important element in poker; the "what" is just the result, the barest if not most deceiving of the elements.  It’s the "how" and the "why "that open up the skills of learning, appreciation, and wisdom.

But while the game has evolved considerably, ESPN is still stuck in the "what.”  The August 27th broadcast continually scurries away from in depth coverage of Obrestad’s table to amped up, instant-gratification all-in moments, chip count updates, and  tender human interest stories  that serve to capture poker as little more than a charming game of results orientated swings in which skill is ultimately an afterthought.

Poker doesn't need to be depicted as friendly and relatable in order for it to take what Mr. White refers to as "the next step.”   So let's assume that ESPN has some serious sway in further influencing the public's perception of poker as a skill game, just as the network did when it influenced so many new players to buy into “The Moneymaker Effect” by way of a tidal wave of re-played 2003 - 2005 WSOP Main Event episodes.  Let’s assume further that legalizing online poker operation in the U.S. would serve ESPN’s best interests to continuing to provide robust journalistic and entertainment coverage of a fascinating, evolving game.

These are both fair presumptions, and if they’re true, then ESPN needs to focus more on the quiet and complex space between Obrestad and Timoshenko, both sitting in front of a river card, engaged deeply in not how much money there is to be made, but in the value of their decisions.

Argun M. Ulgen is a freelance writer residing in Brooklyn, NY. His work can be found at his Twitter account.