The NFL's ban on purses is sexist 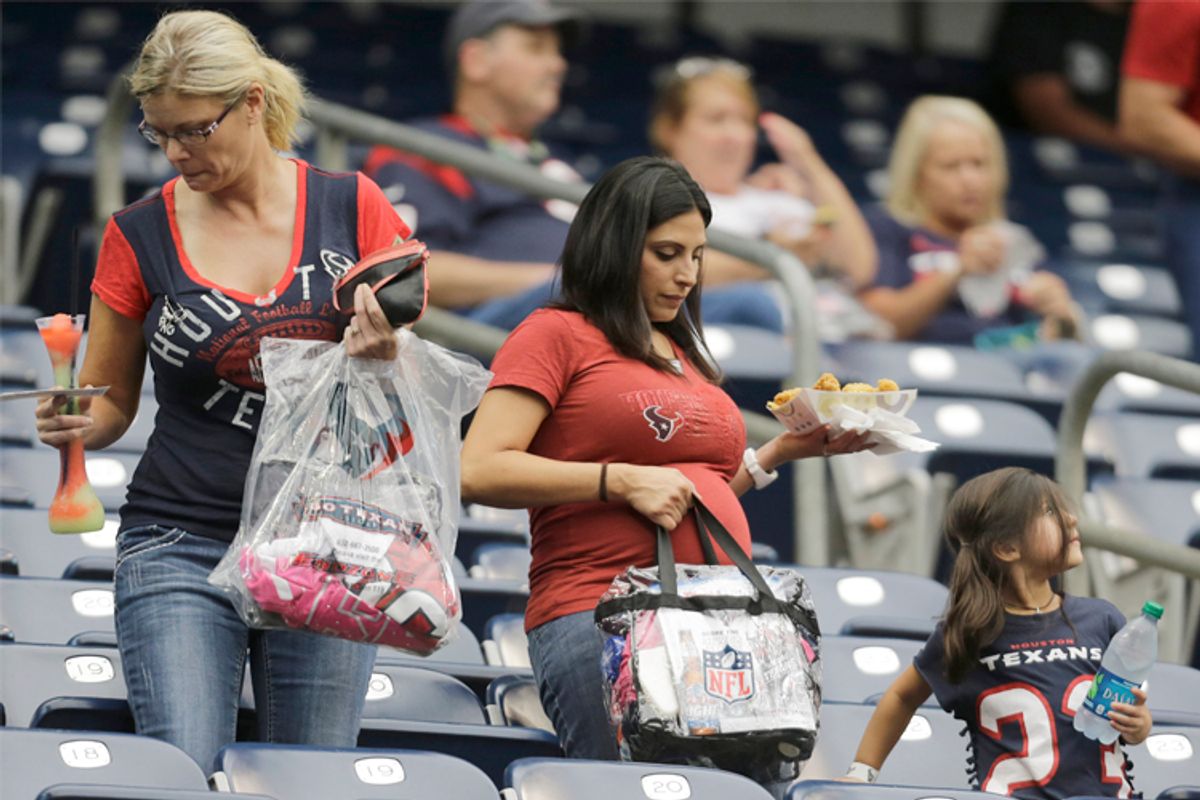 With their belongings in clear plastic bags, fans arrive before a preseason game, Aug. 25, 2013, in Houston. (AP/Eric Gay)
--

I recently tweeted this photo of my football tickets not fitting into my tiny handbag since new NFL rules prohibit purses larger than a clutch in stadiums on game day. My picture was retweeted by a local news outlet and struck a nerve on Twitter. Some questioned my need to carry a bag, while one sports reporter coined the hashtag #waronpurses. Is the NFL’s new security policy anti-woman?

Over the last four years, the NFL has made a marketing push to football’s female fan base. Jerseys have been shrunk and dyed pink. The league’s "A Crucial Catch" program raises awareness about breast cancer.  September’s issue of Marie Claire included a 16-page insert from the NFL called "The Savvy Girl's Guide to Football” - the centerpiece of an advertising campaign appearing in half a dozen women’s magazines this fall.

The campaign is working: sales of women’s football apparel have tripled in the past four years.

But the NFL recently announced that bags, including women’s purses, will not be permitted into stadiums. Instead, the league recommends carrying a Ziploc bag full of your belongings, using a small clutch, or buying a clear team-branded bag.

This begs two questions: What woman wants her wallet, feminine products, and medications in clear view of 80,000 of her closest friends?

And more importantly, who came up with this plan?

The answer to the second question is simple: men. The Committee on Stadium Security, the NFL’s operational committee that oversees and develops security practices for game facilities, voted for the new policy this spring. While the league doesn’t make the full roster of stadium security committee members readily available, NFL spokesman Brian McCarthy said that the committee includes seven men and just one woman.

In fact, of the 32 NFL teams, only one woman, Virginia Halas McCaskey of the Chicago Bears, is the principal owner of a franchise. Carol Davis co-owns the Raiders with her son, Mark, who manages the day-to-day operations. That means that only 4.6 percent of NFL team owners are female. Hell, even Republicans in Congress have a better ratio of women in their ranks.

Decisions are made by those who show up. Unfortunately, the only people allowed to show up for league meetings, where decisions like the bag ban are made, are team executives and coaches. That is an almost exclusively male group.

We heard a lot about the “war on women” during the November election season -- one egregious example was a Congressional hearing on birth control with no women on the panel. Female voters said loud and clear that they don’t want men limiting their options on healthcare.

The sentiment toward the NFL’s purse ban among women on social media and in news articles has been similar. We want the option to carry our handbags. Our pants and skirts don’t always have pockets. We don’t want other fans to see our personal items. We are concerned about theft either in the stadium or on public transportation home. We are worried that we won’t be able to fit items like diapers, tampons, or nursing pads in tiny purses. We don’t feel like swapping purses to attend a game. We don’t own a small clutch and don’t want to pay for a new clear bag. We don’t want to carry a Ziploc bag because it has no handle and, frankly, looks stupid.

The new rule was implemented as both a safety measure and a way to speed up the entry process. Those are admirable goals. But they need to be balanced and reasonable. What seems reasonable to a group of men may not to women.

According to the NFL, 35% of those who attend games are women and more than 50% of women say they watch regular season games. The league has made strides in marketing its merchandise to women. But the NFL’s female fans deserve more than lip service when it comes to this war on purses. After all, without our handbags, it will be much harder for us to buy those pretty little pink jerseys.

Sarah Maiellano is originally from Philadelphia and now lives in DC, but she’ll always be an Eagles fan. Follow her on Twitter at @SarahMaiellano