What a gorilla can teach us about fighting sexism 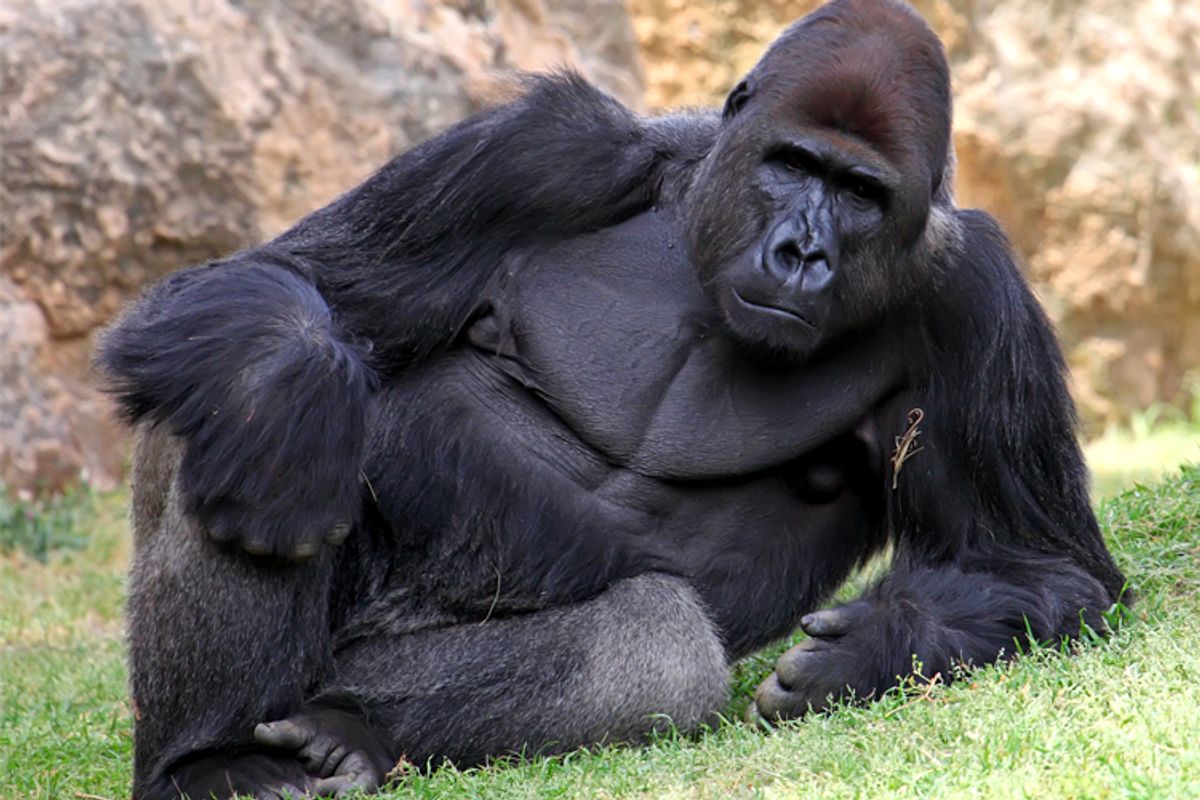 Our great lessons in how to behave can come from the most unexpected sources. This week: Pay attention to an animal in a zoo. An actor on the stage. They can teach us about our attitudes toward women.

On Monday, the Dallas Zoo announced that it was moving Patrick, a "gregarious" 430-pound Western lowland gorilla, to Columbia, S.C.'s Riverbanks Zoo and Gardens to have a little solo time till he works out his personality issues. If only all sexist, aggressive apes could be similarly dealt with. Is there room at that zoo for YouTube commenters?

As NBC news reports, Patrick gets along well with humans but has problems with his bro gorillas -- and flat-out conflicts with females. Zoo officials had hoped he'd settle down and breed, but instead his dating efforts went flat when "he bit one female and sneered and nipped at others." Lynn Kramer, the zoo’s deputy director, told the Dallas Morning News this week that Patrick was introduced to two prospective partners a few years ago, but "He figured out that he was twice their size and began exerting more dominance." Eventually the females "became so stressed they couldn't eat" and "began avoiding him at all costs." They were moved to separate quarters a few months ago.

In South Carolina, Patrick will initially have a man cave all to himself, but will be able to see and smell the three other male gorillas nearby. If he can prove he can get along with them, he may eventually be able join the others as a fourth roommate. Like the Monkees.

Back in Dallas, taking Patrick's place after his departure will be two new guys, brothers Zola and Shana. They should settle in nicely; Zola has already gained Internet fame for his fabulous breakdancing moves. So let this be a lesson, dudes who are not nice to females. You can be replaced, and by someone who knows how to execute a super-fresh spin. And while Patrick's exile may just seem a fun bit of color from the wide world of animals, it's also, sadly, one of the few concrete recent examples of a news story in which the abuse of females has any consequences for the perpetrator. A little more of that, please.

Meanwhile, back here in the human world, New York has a great, ferocious profile this week on Norbert Leo Butz, and the horrific crime that redefined him as an actor. In 2009, the Tony winner was in previews for "Catch Me If You Can" when his sister Teresa and her partner, Jennifer Hopper, were raped and stabbed during a home invasion. Teresa Butz was eventually able to break a window and flee into the street, where she died soon after, "pleading for people to tell her mother she loved her."  Hopper, who was able to escape, survived. The crime eventually inspired the Angel Band Project, which helps survivors of sexual violence heal through music and promotes awareness through events and concerts. Butz has, inevitably, lent his vocal talents to the project.

And in the past year, Butz has been making a conscious and vocal effort to change the conversation about violence against women, and in particular violence in his own business – entertainment. In May, he received an honorary doctorate from his alma mater, and used his speech as a chance to tell students, "When watching your favorite television show, or building a queue on Netflix, or heading to the AMC multiplex, or downloading games or films or web series, or even just channel surfing at 2 am from your sofa, say no to violence against women in so-called entertainment. Change the channel at the very least." And he announced that he no longer auditions for "material that uses the rape, mutilation, or murder of a woman for the purpose of adding suspense to a plot, to tease or titillate an audience when the narrative gets boring." That kind of choice has repercussions. New York reports, "Under the new restriction, he's had to reject almost every film and TV script – mostly police procedurals and serial killer dramas – he's been offered." Almost every single script out there involves violence against women. That sounds about right.

Butz is fortunate that as a successful theater performer, he has options that many struggling performers don't. But he's correct that all of us have a voice, and all of us can choose what kind of culture we want to build for ourselves. We can be one that lazily exploits real human suffering and experience for easy shocks. Or we can be a little better evolved.