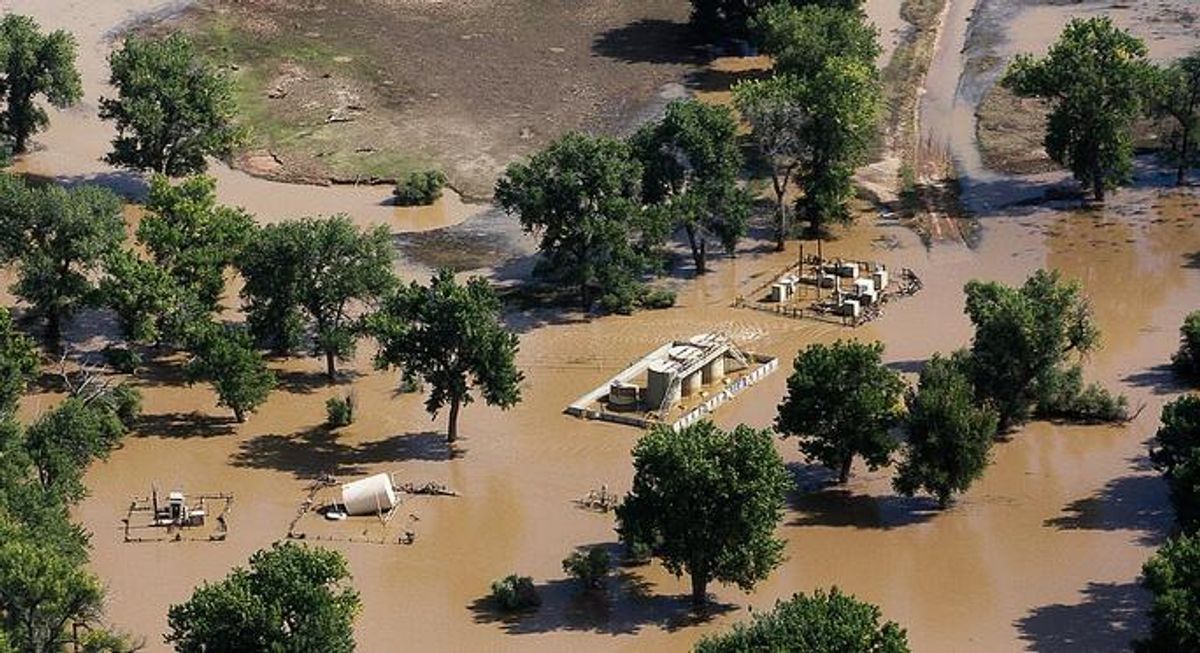 The airplane banked right, bucking from the turbulence. I was blasted with freezing air as the pilot opened a window so the CNN cameraman could get good footage of the flooding South Platte River. I moaned. The fact that I was up there at all was a near-impossibility. Perhaps we all are allowed one irrational fear, and mine is small airplanes. But a rational fear of mine is much larger and looming, and I wanted to see one of the few things that frightens me more than flying—the effect of Colorado’s recent flooding on the fracking sites near my home.

Regardless of one’s views of hydraulic fracturing—a method used to break up shale rock with millions of gallons of water, sand, and chemicals to release natural gas or oil—the fact that at least 10 oil and gas spills have occurred in the past few days of flooding is alarming. I live in the foothills of Colorado, 20 minutes from Weld County, which is the epicenter of fracking in America. Weld County has 20,000 active oil and gas wells—not only the highest density of operating wells in Colorado, but in the entire nation. Of Colorado’s 62,000 oil and gas wells, about 1,900 have been shut down since the flooding thus far, mostly in this area.

Which is why yesterday I found myself in a six-seater airplane owned by EcoFlight, an organization which uses small aircraft to educate and advocate for the natural world. I was crammed in the back seat, behind the CNN crew (NPR and CBS having been told to wait for the next flight). For a moment, I stopped to enjoy myself. Hey, I realized, this isn’t so bad! The world is pretty gorgeous from up high, after all. The waves of Colorado Rockies rose to the west, and crop circles and pastureland stretched in all other directions. Blessedly, there was a break in the rain, so we had blue sky above as the pilot, EcoFlight president Bruce Gordon, flew along the river below.

But then my mood changed, because if you looked past the good scenery, the view got ugly. Gordon started to point out things. “Do you know what you’re looking for?” he asked the CNN crew via headset. “Do you see those red fracking tanks?” I did, because social media—in Colorado, at least—has been filled with images of discolored water, flooded wells, tanks tipping over. I’d gotten use to the images, and they had me worried. A note on the Colorado Oil and Gas Association website, on the other hand, says that wells have been shut down and that emergency plans are in place, and that no sites are being operated that are compromised.

Whom was I to believe? What was the extent of the damage?

That’s a debate that will be raging for some time as the waters recede; but seeing it for myself seemed like a good first step. Our guide on the plane, Shane Davis, chimed in as well. “This is not something I ever dreamed I would see,” he said, leaning down and peering out the window. “The massive destruction from the flood itself, but also to see thousands of oil and gas wells out there.” Davis is the coiner of the term “Fractivist” and the man behind the subsequent Fractivist movement. (He was wearing, of course, a ballcap with FRACTIVIST emblazoned on top). Appearing as if he hadn’t slept for days, Davis looks like an oil rig worker himself. You wouldn’t guess that he was a research biologist, or a man who was awarded a medal by NATO for his work overseeing a program in environmental safety for the Department of Defense, a guy who worked as a marine biologist for the National Oceanic Atmospheric Administration, or a National Science Foundation grant recipient in molecular genetics. He doesn’t even look like the man who coined the term FRACTIVIST, which you see on Colorado’s countless Subarus everywhere now.

His main complaint? These wells were built in a flood plain, knowingly. After all, the process of extraction needs a lot of water, and placing them next to a river makes it easier. Unless it floods. “The state has been grossly negligent in protecting the citizens of Colorado,” Davis said. “If you place a fracking pad 50 feet away from a water way in a flood plain, well, it does not take a rocket scientist to know that this is going to be a catastrophe.” Yesterday, in fact, he asked Governor Hickenlooper to enact a statewide moratorium on all oil and gas activities, including those on any completed wells, currently active wells, compressor stations, gathering stations, and processing plants.

For a short while, we were all forced into silence from the rush of the wind as the window was opened again for the CNN cameraman to get his shots, and while the anchorwoman recorded bits of her story.

When they were done, Gordon shut the window, and both of our guides went back to pointing out what we were seeing. Davis filled the CNN crew in on the basics of fracking, and while Gordon sometimes threw in an occasional “that’s right,” or “yup,” his main way of communicating would be to bank the plane right, left, then right again to keep us circling over the holding tanks, trucks, water tanks, pipes; and then, especially, to show us discolored water where crude oil and fracture fluids were going into the South Platte near the town of Erie. He showed us the white tanks of crude oil, the red fracking tanks, the derricks, the trucks—many in standing water, several tipped to the side. Then he flew over—just to make an additional point, I suppose—a playground and housing development with a fracking site in the middle.

Although the floodwaters receded a lot yesterday, the damage was still evident: flooded parking lots, neighborhoods, and, yes, oil and gas sites. “We were clearly not prepared for worst-case scenarios,” Davis said over the headset. “Not a 100-year flood, or a 500-year flood, or a freak flood, like this one was.” He sighed, frustrated. “I’ve been warning this state for three-and-a-half years that they don’t have good regulations in place.”

It’s going to take a while to figure out how much damage there has been—it could take weeks for the floodwaters to recede enough to assess the contamination. Moreover, the State of Colorado has only 15 inspectors for all of Colorado’s oil and gas wells. As I pondered this, Davis read my mind: “Once the water starts to recede,” he said, “we’ll see so much more. We’ll see the base of the iceberg, so to speak. We’ll see the infrastructure, what’s beneath all this mess.”

The Environmental Protection Agency is now arriving to help with this situation—belatedly. “We have serious concerns because the industry is out there ‘self policing,’" Davis said.

It was then I realized—with a bit of sorrow—that Gordon was taking us back to the little local airport. Despite the visuals, I was enjoying the flying part after all. When the plane came to a stop, I was reluctant to get out. I wondered if I could sneak my way into the next flight, with the NPR folks. But no: they were full up. I sighed and reluctantly got out.

Later in the day, I spoke to several local landowners who lived in the area I’d just flown over. One was Laurie Lareau, who lives right near the confluence of the South Platte and the Big Thompson rivers. Right near her three acres and home, she says, there’s a tipped-over fracking tank. “It’s crushed,” she said. “There’s lots of debris and lots of other oil tanks in the trees over there. It’s pretty spooky.”

She purchased her home because it was out of the flood plain, and at that time fracking wasn’t much of an issue. “This was supposed to be our dream home. We wanted to retire here,” she said. Since then, she said, the number of wells has exploded, and her opposition to fracking has increased as well. Indeed, she fears that the oil from the spill near Milliken, Colorado, will be downriver at her home soon. “I’m mad. We might not ever know how many of these wells are flooded or leaking or messed up,” she said. After a pause, she added, “The oil and gas industry? They’re good at keeping their business quiet.”

Laura Pritchett is the author/editor of six books. Her fiction includes the novel "Sky Bridge" and "Hell's Bottom, Colorado." Her work has been published in many magazines, including The Sun, Orion, 5280, High Country News, High Desert Journal, OnEarth, Elle and others. She has received numerous awards, including the PEN USA Award, the Colorado Book Award, and the Milkweed National Fiction Prize. More at www.laurapritchett.com.