This is America's worst regulator (and JPMorgan's best pal)

Want to know how a megabank like JPMorgan gets away with so much garbage? This obscure regulator will infuriate you 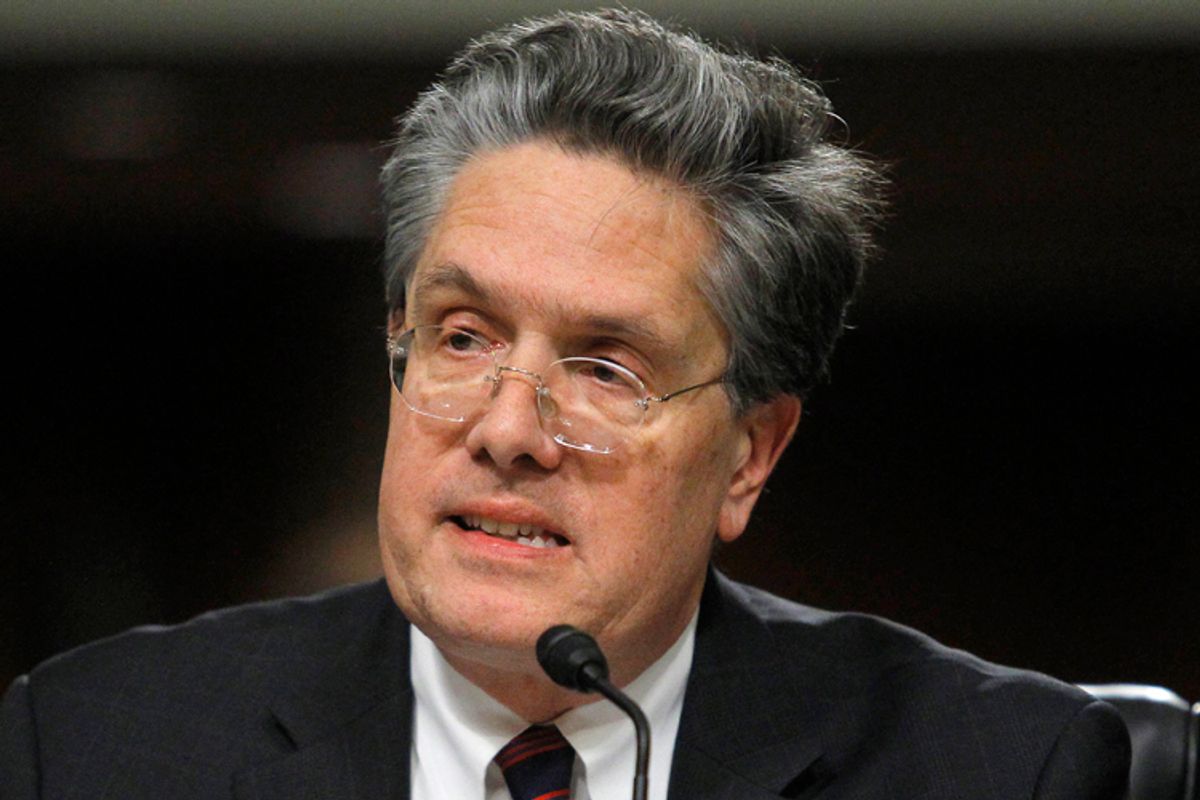 At times it doesn’t seem like JPMorgan Chase runs any legal businesses. The good news is that some in the federal government appear to be slowly catching up to their illicit enterprises. Unfortunately, there's one regulator whose negligence is beyond problematic, and damaging the country. Meet Thomas Curry, head of the Office of the Comptroller of the Currency (OCC).

The OCC is the obscure yet powerful primary regulator for JPMorgan Chase and other national banks -- and is frankly the reason why JPMorgan believes it can run multiple illegal businesses and get away with it. The OCC has been more of the mega-bank’s pal within the government, rather than a tough-minded regulator. And a settlement in yet another case of malfeasance at JPMorgan, released late last week, shows that nothing has changed.

The case involves litigation practices by JPMorgan in various collections, and a failure to comply with the Servicemembers Civil Relief Act (SCRA), a statute that protects members of the military in financial transactions. It turns out that JPMorgan conducted its credit card, auto and student loan collections in the same illegal fashion as it did its foreclosure operations: using affidavits where low-level employees testified to personal knowledge of the cases without actually knowing anything about them.

This is called “robo-signing,” and it means that fraudulent sworn documents were filed as evidence in court so JPMorgan could obtain judgments against borrowers. Often the sworn documents would have inaccurate financial information, so the bank was attempting to collect false sums from the borrowers. And it rarely complied with the SCRA, which sets maximum interest rates charged to service members and bans legal proceedings for service members in active duty in a war zone. JPMorgan couldn’t even manage that, suing soldiers while they served in Iraq or Afghanistan or elsewhere.

Unlike the SEC, the OCC agreed to a settlement without forcing JPMorgan Chase to admit or deny wrongdoing. Worse, they are giving the bank several months to design their own punishment, a fairly common but nonetheless appalling practice. It’s like arresting someone who knocked over a 7-Eleven and telling them they have 180 days to figure out how much of the money they stole they should have to give back. Needless to say, the criminal is an unreliable judge of the proper punishment.

Under the settlement, OCC ordered JPMorgan Chase to create a compliance committee of bank officers to work on fixing the company’s litigation practices and SCRA violations, and submit progress reports, known as a “comprehensive action plan.” The bank has various deadlines, months in the future, to create a series of compliance plans and procedures. Then, they have to come up with a “Collections Litigation Account Review” to look at all the accounts they put into litigation and see if they owe individuals money due to faulty practices. The bank would control the review, and they have six months to put it together. They have three months after that to “develop an acceptable plan” for remediating borrowers harmed by the practices. That puts us into summer 2014 before anyone will see a dime. An “SCRA Compliance Plan” has a similar process and timeline.

The Collections Litigation Account Review resembles the Independent Foreclosure Review, where JPMorgan Chase and other banks, also under the supervision of the OCC, were supposed to review their records of foreclosure cases to determine if their borrowers were harmed. That turned into such a debacle that the OCC threw out the reviews and agreed to a hastily arranged cash settlement, where most borrowers got as little as $300 in relief. Now, OCC is turning to the exact same type of review process, again controlled by the bank that committed the violations, for JPMorgan’s collections litigation case.

And the remediation for affected borrowers is the only penalty JPMorgan Chase has to pay. OCC participated in the London Whale and phantom credit card services settlements, and in conjunction with other agencies, they did force JPMorgan to pay a fine. But when they’re on their own, as they are in this collections litigation case, no penalty is required. That makes illegal activity a cost of doing business, and the bank can simply decide whether breaking the law will achieve them the maximum profit.

“It’s like the Tour de France, they have to cheat to make their numbers,” Bartlett Naylor of Public Citizen told Salon. “And if the regulators don’t punish them for cheating, they will keep on doing it.”

The other federal agencies attempting to render judgment on JPMorgan Chase certainly aren’t doing enough. The Justice Department did indict two ex-traders of the bank after it admitted fault in hiding their London Whale derivatives trading loss from regulators and investors, but they are both living in Europe and don’t expect to get extradited, rendering ineffective any effort to pursue them or their superiors. Senior management has faced no punishment in the Whale case or any others, up to and including CEO Jamie Dimon, despite obvious culpability. The bank has been forced to sell their physical commodities business after questions about market manipulation, and Dimon has promised to further simplify JPMorgan’s lines of business, reflecting a cumulative effect of the constant fines and lawsuits to their reputation. They’ve suffered billions in litigation costs and plan to spend another $4 billion this year to comply with regulations (don’t cry for them; they make about $6.5 billion every quarter). That’s about the best you can say about this sorry attempt at taking down the biggest crook on Wall Street.

But at least these other agencies, from the Consumer Financial Protection Bureau (CFPB) to the Securities and Exchange Commission (SEC) to the Justice Department, are showing signs of life in holding JPMorgan Chase to account. Curry, installed last year as the head of the OCC, promised to transform the agency, to have them act like a regulator again rather than a big-bank advocate. Their actions in this collections litigation case show that they’ve returned to the same bad habits. Keep in mind that OCC is the primary regulator for JPMorgan Chase and other mega-banks like Bank of America and Citigroup. They are the first line of defense between consumers and these predatory institutions. And they have proved themselves unworthy of the task time and again.

This negligence is particularly stark considering how many others are finally onto JPMorgan's shenanigans. Just over the past week, it paid $920 million in fines and admitted fault in the aforementioned London Whale case; paid another $389 million in fines and reimbursements over charging credit card customers for services they never received; were informed of an imminent enforcement action over their manipulation of the commodities market; faced bribery investigations over hiring the children of well-connected Chinese politicians; faced another investigation from the state of Massachusetts over credit-card collection practices; were uncovered as the main beneficiary of ultra-cheap borrowing from the Federal Home Loan Banks, a program meant to help small community-based lenders; and just yesterday, learned of a civil lawsuit from the U.S. Justice Department over selling mortgage-backed securities to investors without informing them of the poor quality of the loans in the portfolio.

In all, the bank faces “investigations from at least seven federal agencies, several state regulators and two foreign nations,” according to the New York Times.

While fines are an imperfect mode of punishment – shareholders foot the bill, not executives – there have been some modestly positive steps taken by the government in this flurry of action. The CFPB enforcement over credit card abuses contained a full refund for customers and a penalty on top of it, actually making the illegal activity unprofitable (how novel!). The SEC forced JPMorgan to admit wrongdoing in the London Whale case. The Justice Department planned to sue JPMorgan over mortgage bonds after refusing to agree to their settlement terms, deciding that the fine the bank was willing to pay would be too low. None of this rises to the level of sufficient punishment for what amounts to a criminal enterprise masquerading as a bank, but like the tortoise in the proverbial race against the hare, the slow, plodding law enforcement and regulatory apparatus is gradually catching up to the swift crooks at JPMorgan Chase.

Well, except for that one tortoise: Thomas Curry's OCC.